Well after falling in love with NORRA we have decided to get into a more NORRA appropriate vehicle. Honestly, I can’t think of better vehicle to run than an H1 that was owned by the late, great Rod Hall! It is truly an honor to be able to campaign a vehicle owned by a true Offroad legend! We are excited about the build and hope to return it to its 1991 lineage!

A few things we think we know,
This hummer is one of the first if not the first civilian hummers. We believe it was given to Hall by AM General amidst the kick off of the Hall H1 program which predates the debut of the H1.
We believe this H1 to have been used as a support/prerunner H1, I can not confirm it was used as a race vehicle. If someone with more knowledge may confirm, but we are hoping to change that soon!
There are a lot of 1 off parts on this truck that we hope to find where they were made. For instance the 6 huge bypass shocks are BRW?

Currently, it is over at Jeff Furrier’s shop “UPR” getting some TLC. This won’t be the caliber of build of his beautiful Roger Mears Jeep Honcho, but more of a reconditioned original. The plan is to save the original paint, suspension, wheels and as much true 1991 original build as possible. This H1 is to be enjoyed upon completion and hopefully bring a shelf full of NORRA trophies in the future! Once again, it is truly an honor to work on and enjoy a vehicle that the great Rod Hall once enjoyed himself. We hope we make Rod and the Hall family proud!

I remember the shake down run for the race hummer. It was at a VORRA Virginia City race. They raced them while still in the Stormin' Norman desert tan color. Close to the r ace shop, so easy tow for them.

My buddy slammed into the back of them during that race. This was before dust lights. Filed a protest because they were "tan" and couldn't see them in the dust. It was kinda comical.
B

I had some pictures of then off the start. I had BB get Rod's signatures on them for my kids years later. Always a cool and classy guy.

Those rims are probably unobtainium now too.

I remember seeing Rod racing that in Baja on his first race. Story goes that he also preran with it. Only issue was a broken shock mount that they welded back up with the on board wekder.
That was the same race a bunch of Britts showed up with range rovers and found out they were way over their heads. So the moved down from the unlimited class to the same class as Rod and the H1.
Rod wasnt the fastest. But he could maintain a steady speed, no matter the terrain. That's how he won the class.
Awsome that you are restoring it and will continue to race it.
A Hearse doesn't come with a luggage rack!

Neat rig! Looking forward to your progress reports on it. I think I remember when it was for sale awhile back - I believe it had a listing on Bring A Trailer.

I worked for Rod when this truck was built. This truck is either what we called “the prototype” or one of the ‘93 racers. They have changed so much since we built them it’s hard to tell. One way to tell is the Prototype had a T handle scat track shifter instead of the Art Carr with the round handle.

The Prototype truck was indeed not just the prototype for Rod’s racers but also AM Generals Prototype for the civilian Hummer. It raced just one race, the Vorra Virginia City race. It raced under Richard Hampton’s name and 440 number as Rod was still at the end of his Dodge contract. It didn’t even have a fuel cell for that race. We reinforced the stock cage, threw in a set of belts and nets and raced it. After that we built two ‘93 racers for Rod and Chad that raced and won Baja.

GMS74 said:
I worked for Rod when this truck was built.
Click to expand...

So any idea where the shocks came from? Are they original?

partybarge_pilot said:
So any idea where the shocks came from? Are they original?

Most likely they are shocks built by Chad Hall. He was for a long time producing his own. Originally the truck had a stock Hummer shock with a remote reservoir added.

the Hummer handed us a unique problem when it came to shocks, the stock shock has an internal lock out that serves as the bump stop. On the ‘93 racers for the first race (Baja) and the Parker 400 we used a gutted stock shock, internal tube, rod and piston and a eurathane haga ball type bump stop on the rear in conjunction with a set of lightening rods. At Parker this was protested as a mechanical bump stop. Rod in turn protested all the Fords for reinforcing different things. The entire field of trucks was disqualified and the winner became a truck that didn’t even finish. After that we used a stock Hummer shock we cut open on a lathe, welded in a bung for a reservoir, then welded back together in conjunction with a single lightening rod (Rancho was a major sponsor). We used this set up on the ‘95 cars as well. We took that as far as we could then Chad developed an in house shock based on a hydraulic cylinder about ‘98-‘99. What’s on the truck now is most likely a later iteration of that design.

It looks like this truck has had a 6.5l turbo and a 4 speed installed at some point in place of the original 6.2/TH400.

The wheels were made by Ultra (a sponsor). I believe the only vehicles to use them were the hummers and Ivan Stewart’s trophy truck, with a different bolt pattern of course. Originally we raced the ‘93 trucks on one piece Recruit (the cheaper Hummer) wheels and 35” Mud Terrain T/A’s as there was no 17” project yet. The ‘95 trucks got the ultra wheels and 35” projects as I remember. We didn’t use 37” tires to race until the turbo trucks came out. It drove AM General crazy that we didn’t run 37” tires and we usually removed the CTIS. In race conditions the CTIS was prone to leaks and problems and just wasn’t fast enough to change pressures. Cool system just not for racing.

This particular truck was used for that single Vorra race then relegated to pre-runner/chase truck duty. We also used it a ton for military training in the driving school. I was 20-21 at the time and drove this truck down to Baja from Reno several times. A long ride you couldn’t pay me enough to do today but at 20 was cool! Came back on 395 in the snow one year. No heater and just a thin sheet of aluminum between your feet and an icy tire. Never been so cold in my life.

I quit working for rod when we stopped doing the military trucks then ended up in SoCal prepping the Henn’s Edro Hummer. I haven’t seen this truck in person since probably 2001ish. It will be good to see a Hummer racing again.

Awesome info!! Really great to hear from someone who knew this truck at birth! It adds a ton of motivation when people recognize and appreciate a project! Thank everyone for the good words and knowledge. These are the current shocks,

You would have to ask Chad Hall about those. Those are from after my time with the Hummers.

Will do! Thank you for the great info!

It just hit me, I I think I know who’s shocks those are. Bradley’s Race Works (BRW). Brad Falin used to prep Rods truck when we converted the RHI shop to do military trucks. He made those shocks and Chad sold them. Chad would know.

I remember Brads car having the hummer portals all the way around, but I forgot he made shocks too.

I found the listing I remembered from BaT - I assume you bought it from this guy, SMS81? 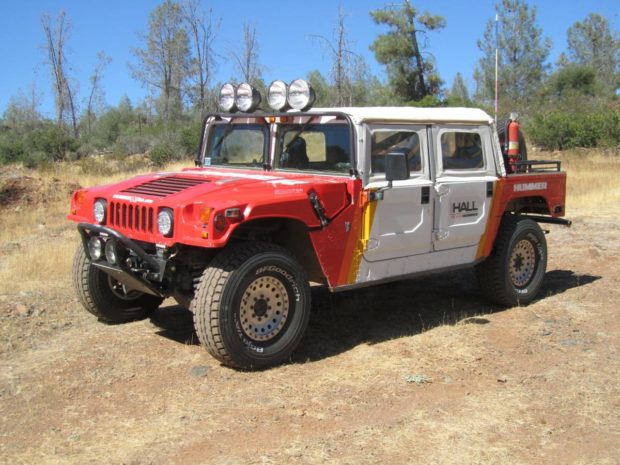 So I see the T-handle shifter as the poster said was in the first prototype build that ran Virginia City as a test bed for the following racers and this became the prerunner. So it never raced Baja?t preran and chased?

bump stops can just be put inside a regular by pass shock?, shock shaft can have a striker plate on top of valve stack, only give away would be two Schrader valves,?, bet it works , opppps, Would work beee#@%&# chen...
Share:
Facebook Twitter Reddit Pinterest Tumblr WhatsApp Email Share Link
Top