I just received this email from SCORE. We are prepping for the 1000 now. We are hoping to see a lot of our vintage friends entered! 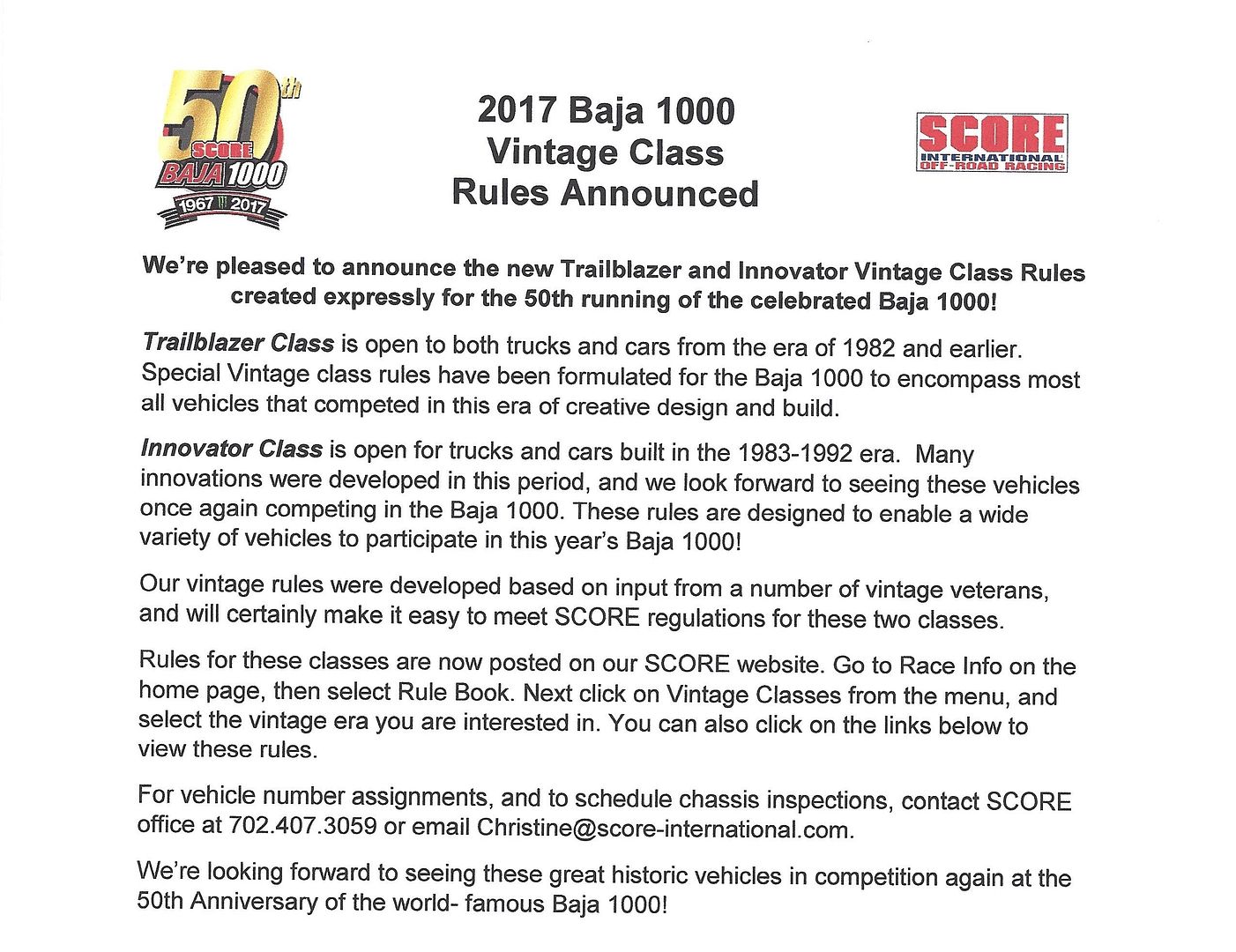 Here are the links to the Rules in the Rule Book:

What year was secondary suspension brought in to buggies? I'm old I know but when I dd this as a kid back in 70's early 80 , I don't remember cars stacking bars being progressive.

Weren't coil overs on the rear of some trucks prior to 92? Also I'm confused on the bump stop thing. Why can it be on a truck but not a buggy?

I think the secondary bars were probably mid '80's. The thought of secondary and air bumps is to keep the older guys racing some of which are hero's of the sport who have broken their backs a few times. If you want to put air bumps on the back of your Ragland car and come race he 1000 with us, I doubt anyone would care. My new car has secondary bars, but we can easily disconnect them. I see it as a prehistoric air bump. At the the 2016 NORRA in our old car, I bulged two disc's and cracked a vertebra. In other forms of historic racing they are much stricter but they are also racing on the same courses that haven't changed. The courses we are running have changed a lot! Especially SCORE courses.

As far as rear coilovers in trucks, '92 may have not been an ideal year to end vintage. It is tough to try to put everything Vintage in just two classes. Score would have preferred to follow BITD vintage open rules but they weren't really completed. Norm was consulted and it was agreed that trucks should have full frame, steel cabs with opening doors, and rear leafs, same brand of engine as the truck and the engine had to be based on a production engine from the era.

Ed, if you weld bump stop cans on the back of the Ragland car I will personally drive to Kansas and poke you in the eye..........
All I want to hear out of you is “speed zone”, “we’re on fire,” and “I got the fat chick.” Zambo

Rory said:
Ed, if you weld bump stop cans on the back of the Ragland car I will personally drive to Kansas and poke you in the eye..........
Click to expand...

At least on a truck they are mostly hidden.


Sent from my iPhone using Tapatalk
B