Does someone knows what happened to the SST Series?
I've been looking for a 2016 Calendar and only shows one weekend... en Australia. 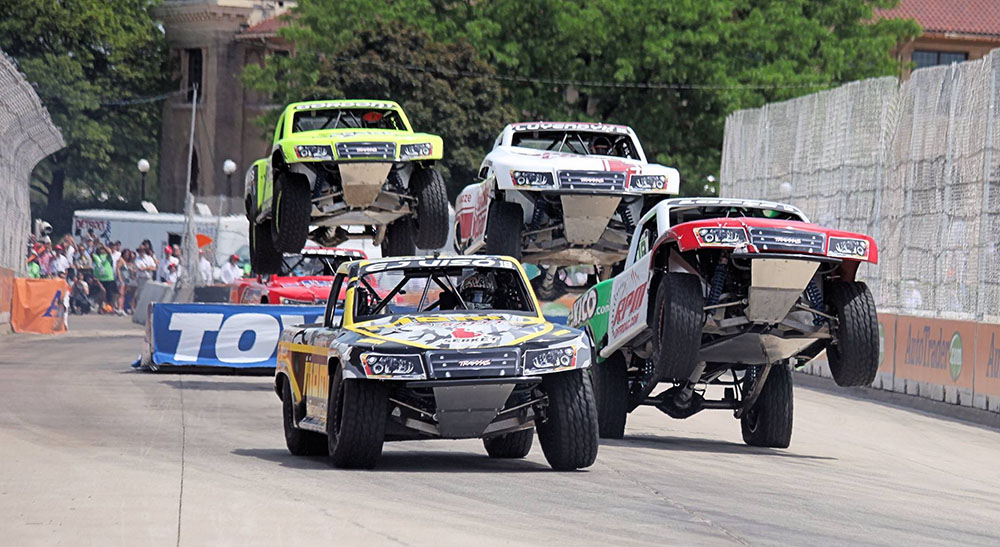 It says on their website that a schedule will be released in late January 2016.....

SST isnt going anywhere. They even added more dates in Australia, Its been really popular. Like the post above schedule will be out after Dakar.

Bring back Mickey Thompson style stadium style racing, like they pitched in the beginning, and then I will watch and attend.
Zambo to Mawtrophykart, go shove an umbrella up your ass and open it.

The grandstands are Full at many of the SST events. SST is thriving... Is it what Robby envisioned the series to be when he started it? Absolutely not, but things have a way of organically changing if you allow it. He's followed the money and it seems to be working. He has no shortage of venues lining up to have them race at, decent TV, has some pretty good financial backing, X Games, and has a good mix of drivers coming in and out of the series. I'd say he's doing quite well. Is it the new Mickey Thompson Series? No, but it is the original Robby Gordon Series. HAHA.
www.downanddirtyshow.com
Twitter & Instagram: @jimbeaver15

To the OP, Look out for news after DAKAR. I think RG is a little busy right now.

I well say that I will go to every SST race I can attend. It flat out rocks!!

...coming from someone that makes a living in the the LOORRS scene.
AMERICA BLESS GOD!

Charlietuna said:
People don't want to watch "off road" vehicles run on pavement? They're trying too hard to be another version of Rallycross? A niche, inside a niche, inside a niche usually isn't a money maker. Lucas has the short course market locked up in the US right now?

It says on their website that a schedule will be released in late January 2016.....
Click to expand...

They are not trying to be like anything. Unfortunately he had to make a course correction because attendance in the large stadiums was not there as a stand alone series. The course correction paid off. He has tens of thousands in the stands now running on the asphalt as a support series for IndyCar and V8 Super Cars in Australia. They are racing on asphalt and dirt depending on the track. RG is doing what he always wanted to do and what the others arguably have struggled with.......Bringing off road racing to the masses. Its just that the recipe for success in 1990 vs. 2016 has changed. RG was sharp enough to realize that and adjust accordingly. The move not only saved the series, it helped grow it and is making it a global series

I have been to the Gold Coast race in Australia. There were more people interested in them than the V8 Supercars. This is obvious at how quickly they announced another couple of races in Sydney. I for sure will be going to any races close to Brisbane in the future.

MCM MOTORSPORTS said:
I have been to the Gold Coast race in Australia. There were more people interested in them than the V8 Supercars. This is obvious at how quickly they announced another couple of races in Sydney. I for sure will be going to any races close to Brisbane in the future.
Click to expand...

Cool to hear, thanks for the update... I still have not had the chance to see one in person. Either scheduling or distance to the events have gotten in my way each time so far...
Freelance Photographer/Editor Looking for Work!
PM For Details.

Im very keen to catch them. The aussie V8 supercar series get pretty boring after a while, slightest touch of the wall and car is out of the race. With the SSTs, they just keep on going. Not much seems to stop them. If I had to make the choice it would be the SSTs before the V8s for sure.

Schedule will be released after Dakar .

Ill put money down that SST will again be a highlight motorsport at the Summer X-Games.

I have to say I am very impressed on what Robby has put together in the short amount of time, we we're able to catch the Vegas race during SEMA and I have to say it was exciting, fan/family friendly, skyboxes, and lots of other elevated areas for viewing. If schedule permits we would love to try and get out to some more. I'm sure Robby is thinking to expand this globally in the next 5-10 years, hopefully sooner! Keep kicking butt Robby!
Bink Designs
info@binkdesign.com
619.922.2465

Las Vegas was absolutely the best venue to date (at least stateside). In do part, they used and re-purposed the same venue that GRC had going on the night before, so the additional infrastructure and amenities such as the sky box was totally welcomed.

The racing action was off the hook too!

The SST trucks were literally sailing through the air at my eye level and I was two storys in the air.
AMERICA BLESS GOD!

Robby Gordon has done a heck of a lot for off road racing.

yes, indeed, Chim Chim. This very fact has caused some of us to develop man-crushes on RG. (not me, no way, no how, well, kinda, a bit, just a bit WickedGravityVideo said:
yes, indeed, Chim Chim. This very fact has caused some of us to develop man-crushes on RG. (not me, no way, no how, well, kinda, a bit, just a bitView attachment 164513 )
Click to expand...

I've had more than one friend who saw them race at long beach say they were the most exciting racing of the weekend. I personally think they're way more entertaining to watch at speed on pavement than they are in side a tiny stadium dirt track.
TR Racing Wheels, BFGoodrich Tires, KING Shocks, Impact Safety, KC Hilites, Weldon Pumps, Motive Gear,