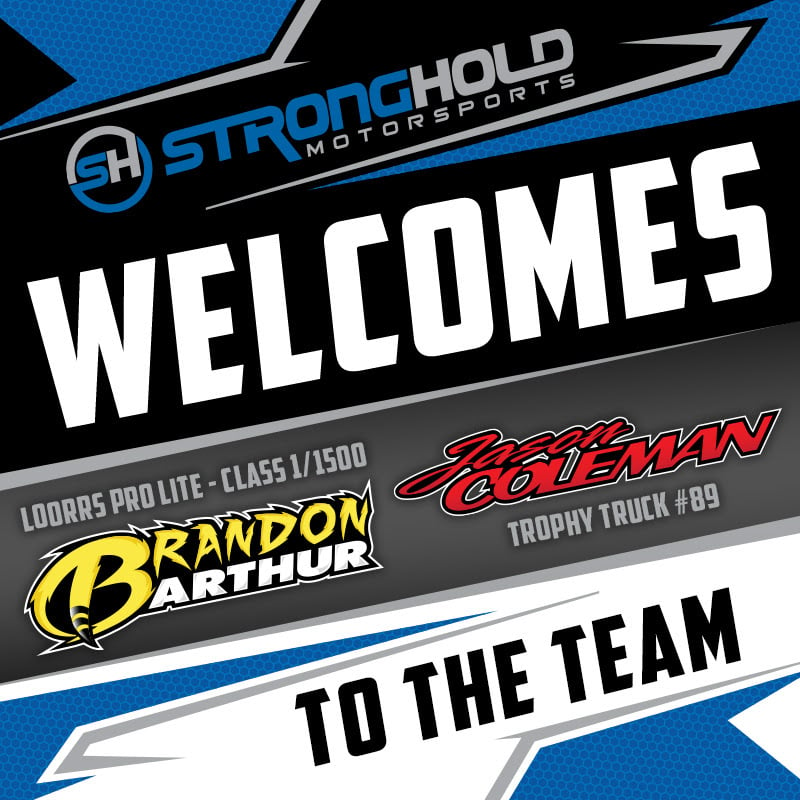 Three championship winning teams will be racing under the Stronghold Motorsports, MAVTV, Toyo Tires banner in 2017. Stronghold Motorsports has joined forces with HRT Motorsports and Coleman Motorsports to create a Super Team. The Stronghold “Super Team” will compete in both short course and desert offroad racing. “We are very excited about the people we have put together, it’s a great collaboration of successful teams,” said Scott Bailey, the team’s leader, “We are just where we need to be, and are looking forward to being back in the Pro Lite class where we have multiple championships. We have spent time testing and tuning our new MAVTV Trophy Truck and done some enhancements to our class one car to make it even faster. Our desert racing program this year will culminate in racing the 50th anniversary of the Baja 1000.”

Competing in the Lucas Oil Off Road Racing Series for Stronghold Motorsports will be drivers Brandon Arthur, Madix Bailey, and Brandon Bailey. Brandon Arthur will race in the Pro Lite class where he has been a championship contender. Arthur won his first championship in 2008 racing in the Jr2 Trophy Kart class. In 2009 he moved up to the Modified Kart class and earned a Rookie of the Year title. An accomplished fabricator and mechanic, Arthur began building his own class 1400 desert truck and won the HDRA 1400 class championship with it in 2012. 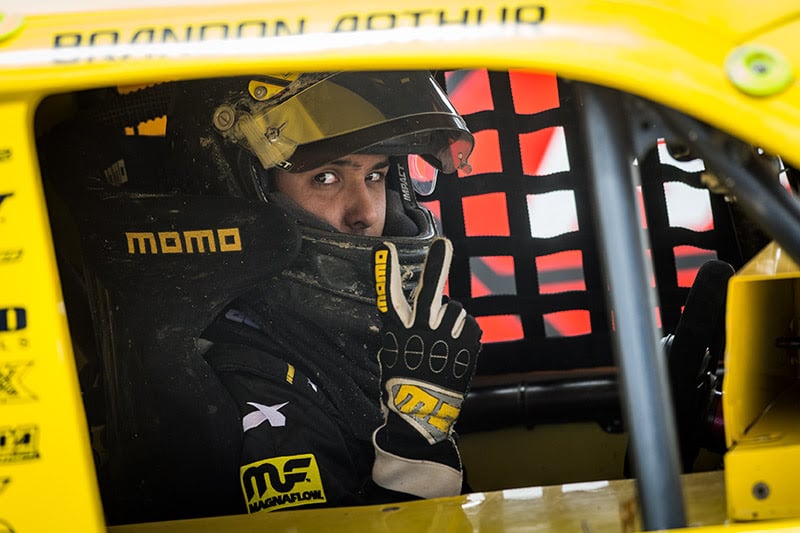 He then built a Trophy Truck in the family’s shop, HRT Motorsports, and won the race in his first time out. After joining the Pro Lite class in the Lucas Oil Off Road Racing Series in 2014, Arthur has risen in the ranks from 8th, to 3rd, and then 2nd in championship points in 2016.

His extensive offroad racing experience will be an asset to the team when he and Brandon Bailey team up to race the Stronghold Motorsports class one car at the Mint 400, Vegas to Reno, and possibly the Baja 500.

Madix Bailey will be moving up from Trophy Karts into the Modified Kart class in the Lucas Oil Off Road Racing Series and has his eye on a top ten points finish. He will be chasing the Rookie of the Year title. In order to get as much seat time as possible, Madix will compete in the national series and also the Lucas Oil Southern California Regional Series.

Brandon Bailey will be back behind the Wheel of his unlimited all-wheel drive Pro-4 race truck for select events in the Lucas Oil Series, starting at the new venue in Wheatland, Missouri, and racing in the MAVTV Class one car in the desert as previously mentioned. Brandon worked his way into the top ten, and earned Pro-4 the Rookie of the Year title in 2014; the premiere class in the Lucas Oil Series in 2014. Racing in the desert class one for a couple seasons, he is anxious to get back on the short track this season.

New for 2017 is the Stronghold Motorsports MAVTV, Toyo Tires Trophy Truck. The Trophy Truck will compete in the Best In The Desert series at The Mint 400, and Vegas to Reno. The goal is to get the truck and team fully dialed in before taking on the 50th Anniversary SCORE Baja 1000 race; looking for a win. The Trophy Truck team will consist of Scott Bailey, Jason Coleman, and co-driver Johnny Nelson. Coleman brings years of desert racing experience to the mix. He worked his way up from the limited class 1600 cars, where he earned two championships, into the faster class 10, and now the Trophy Truck. 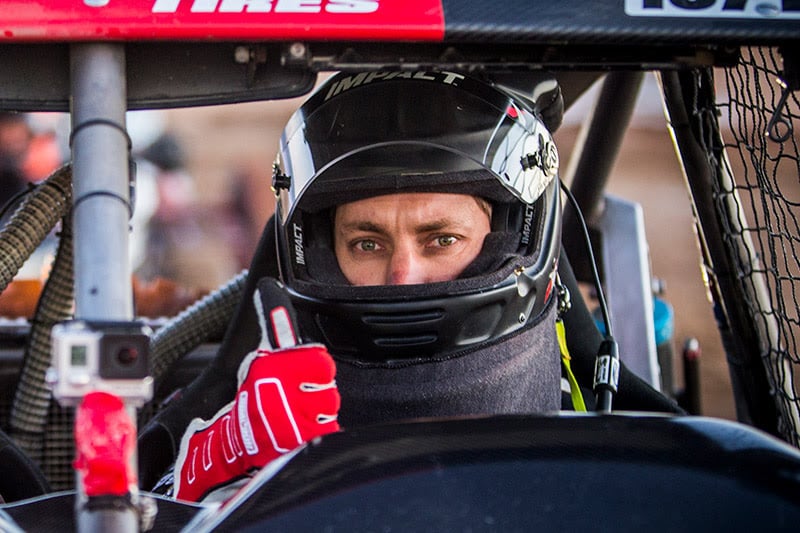 “Joining with Stronghold Motorsports is a dream come true,” says Coleman, “The people involved, the sponsors, and our equipment are the best from top to bottom; I’m really excited. I have dreamed about racing a Trophy Truck since I began sweeping floors at the Herbst Brothers racing shop in 2000. I am grateful for the opportunity; this is the result of a lot of hard work. I can’t wait to get behind the wheel and represent Stronghold Motorsports, MAVTV, and Toyo Tires.” 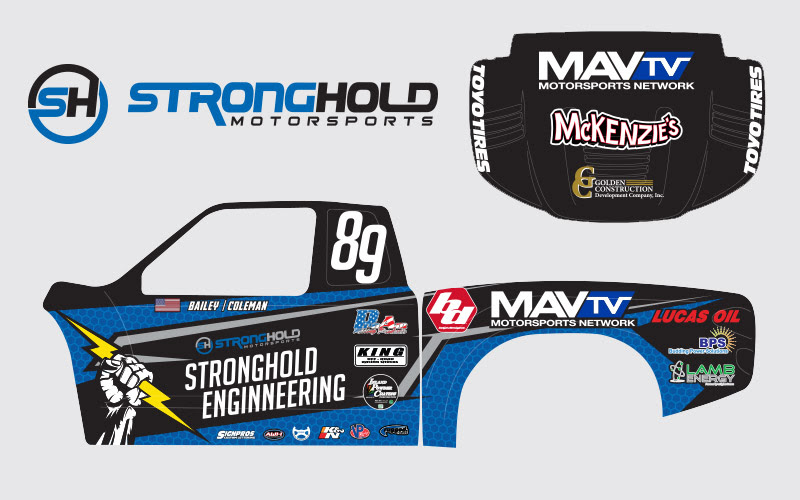 Stronghold Motorsports has been competing in their MAVTV, Toyo Tires unlimited class one car for 18 races. They have finished every race, stood on the podium 10 times and earned 2 wins. After earning more points than anyone two years in a row, but not getting the title, they are changing tactics. Instead of racing towards a championship, they will be running several top races; going all out for wins. Brandon Bailey and Brandon Arthur, the Double B’s, will be taking turns behind the wheel. The car has been recently revised to allow more wheel travel in front. With even more speed on tap, it’s going to be great watching them open it up.

Stronghold Motorsports is poised for a great season in 2017. They are looking to add to their impressive results on the track and in the desert. The team they have assembled is amazingly accomplished and has an unbelievable depth of racing knowledge that they bring to the table. Fans in the Lucas Oil, Best In The Desert, and SCORE International series races are in for a real treat in 2017. For the latest information and updates about Stronghold Motorsports, go to: http://www.strongholdmotorsports.com/
Bink Designs
info@binkdesign.com
619.922.2465

Glad to see Scott Bailey taking 2 other great teams and merging them. Hopefully Brandon Arthur can bring home some wins and a Championship to MAVTV and the Stronghold camp. I hope to make some desert races to see the two Brandon's go for them Class 1 wins. Great PR Bink.
If you read it on the Internet it must be a true story !