BajaFand said:
I was really hoping the American Polaris’s would’ve been designed to look pretty sleek and not so Euro, but I was wrong. Euro and ugly as can be. No offense to Jimco but kind of a let down.
Click to expand...

Completely different rules vs US desert racing, so some of the 'look' is dictated by that. I don't love the look, but I don't hate it either

Ok I have DISH. What channel and what days does it start to show on my TV? Also is Lee Diffey announcing?
Scott

Testing in the UAE prior to the Dakar.
Mark

Honda48X said:
Ok I have DISH. What channel and what days does it start to show on my TV? Also is Lee Diffey announcing?
Click to expand... Honda48X said:
Ok I have DISH. What channel and what days does it start to show on my TV? Also is Lee Diffey announcing?
Click to expand...

I can't exactly remember if it was on FS1 or NBCSN last year. Parker Kligerman did the broadcast last year and did a really good job. Leigh Diffey did good in the past also.
B

Since we have Direct TV, I am going to assume, it will also be on NBC.sports which I believe is 220, can some one confirm and let me know when the Raid starts. 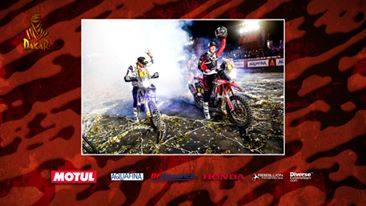 BajaJT said:
Since we have Direct TV, I am going to assume, it will also be on NBC.sports which I believe is 220, can some one confirm and let me know when the Raid starts.
Click to expand...

Yeah it would be channel 220. Race starts the 3rd so there might be a preview show that day and then the actual showing is a day behind. I have the Dakar app downloaded so I can follow the racers I want to.

Testing in the UAE prior to the Dakar.
Click to expand...

still ugly, but if t's as fast as ugly Wow Loeb and Roma will do great, it will be great to see how those ecoboost will do

Can't embed this... but this is for the Amuricans...

Yesterday afternoon, 30 of the top competitors in the 2021 Dakar participated in a video conference.


Isolated in their hotel rooms adhering to the health protocols imposed on them upon their arrival in Jeddah, the main favourites spoke of their ambitions, recreating a bivouac-like atmosphere through the use of video screens!

🎙We are all 100% committed once we put on our helmets, but once we arrive at the bivouac, we experience the same pleasure when talking about what we saw during the day, donkeys or camels along the tracks. In reality, it's like a second family.

🎙That in the beginning, the Dakar was a dream and even today it's still not a job, but rather a pleasure.

🎙My first Dakar, in 2010, was in a truck alongside my father. It was so hard that I swore I would never do it again. But I have met and even surpassed all of my objectives by winning the quad category three times. So, when I received the offer from the Buggyra team, I didn’t hesitate: it was, of course, yes.

🎙Whether you win it or not, the Dakar changes your life. The victory is just the icing on the cake.

🎙Winning is always the goal. I have always won with the number 301! But I have respect for all the drivers and I am especially grateful to all those who worked so hard so that we could be together for this Dakar in Saudi Arabia, because this year has been very difficult for everyone.

🎙The Dakar is at the very top of my list of things I want to accomplish in my life. On the Baja 1000 in the United States, I drove from start to finish and it can last as long as 28 hours, I am used to it. But here, it will be for 12 days! My main worry is the fear of the unknown.
Mark

Russian Driver Alexey Titov (#357) will not participate in Dakar 2021.

Another unpleasant news for the Russian competitors. Alexey Titov, after a mandatory 48-hour quarantine in Jeddah, went through the coronavirus test and tested positive twice.

2) I will spend New Year's Eve alone in isolation. It will be the first time for me therefore recommend movies.
Mark

Changes in the route for the stage 5 and 6