After experiencing the thrills of short course off road racing during the last rounds at Lucas Oil Motorsports Complex, it was apparent the Lucas Oil Off Road Series Organizers had assembled all the necessary elements to host a successful event that could appeal to dedicated fans and new enthusiasts. There was just one large issue that kept the event from selling out and it started with triple digit day time temperatures. Lucas Oil put their money where their mouth is and announced early on that Rounds 7 & 8 would be held after dark and under the lights. With the formula in place and another LOORRS exciting race weekend set, the crowds flocked to Lake Elsinore filling the Lucas Oil Motorsports Complex to near capacity and witnessed some of the very best short course racing to date.

Rockstar Energy, once again, stepped up the involvement and participation, creating the Rockstar alley of short course supported teams. As far as the eye could see, there was nothing but Rockstar banners, flags, inflated cans, and signage. The Rockstar Hart and Huntington Premiere Motorsports Group massive pit area was closest to the entry with Brian Deegan’s Rockstar Metal Mulisha Unlimited Lite pit right across the way. Rockstar’s Team Leduc made their first appearance at Lucas Oil Off Road, and were rewarded big time as they swept the weekend in two Unlimited Truck divisions. As the fans funneled into the facility, they were treated to a variety of ice cold Rockstar Energy Drinks, and all the hippest looking trucker hats one could handle. Half a dozen of the hottest Rockstar Girls were out in force passing out posters and stickers taking pictures with those lucky enough to attend.

At the Rockstar Hart and Huntington Pit, autographs were not hard to come by. Carey Hart, who is currently sitting 5th in the Unlimited 2 division points, plus 6 additional Premiere Motorsports Group Drivers had scheduled autograph sessions each day. If you did not stop by, you are likely to catch one of several interviews, as we hosted ESPN Brasil, K&N, and the production team that prepares the official race coverage for SPEED, VERSUS, The Outdoor Channel and more. SPEED’s Program for LOORS Rounds 7&8 will air Aug 9, at 2 & 3pm or Aug 23 at 1 & 2pm. FOX Channel 11’s Morning Team came out early Friday Morning and aired live on the track action and interviews with Carey Hart, Rodrigo Ampudia, Leroy Lerowald, and several others. 4 different segments were broadcasted to millions of viewers throughout Los Angles County.

With 7 programs competing in 6 separate divisions, the PMG Operation stretched over two transport semi’s long. There was quite a lot going on but the environment spelled out controlled chaos. Scot Demmer, who drove the team’s Unlimited Buggy during the previous round, resolved to mange a smoothly run weekend over driving. The reward was 5 separate podium finishes. The team has also stepped up the Unlimited 2 program with the likes of Blake Wilkey and Dustin Pence. Dustin retains years of experience building and maintaining championship winning off road trucks. These two had their hands full with lots of carnage coming off the track, however it was the group effort put forth that pushed every vehicle to make the checkered flag and finish eight out of eight races.

PMG’s Unlimited Lite specialist has been on a nonstop push chasing multiple short course series back and forth across the country. In fair contention for two separate 2009 championships, Chris Brandt has put it all on the line for light truck bragging rights. During Friday’s practice and qualifying, the #82 Toyota motor kicked a huge hole through the wall of the cast block. Brandt facing his share of struggles and tribulations, he and his crew tore down the truck and prepared for the upcoming battles. Chris pulled it all together and brought home a 3rd place finish for Round 7 and fashioned a clearly dominating performance to bring home his first 2009 Unlimited Lite 1st place finish on Sunday’s Round 8.

John Fitzgerald’s has mounted a charge coming off of two back to back 1st place wins at a recent Bark River TORC event. Coming to Lake Elsinore, John aimed to keep the momentum flowing and laid down the assault on the Lucas Oil Limited Buggy Division. Not only did Fitzgerald claim the pole qualifying time, but John piloted his #314 Lucas Oil Hart and Huntington Buggy to a 1st place finish on Saturday and a 2nd place finish on Sunday. Because of a late season start, John has yet to break into the top five points battle, but if the Limited Buggy domination continues, it is only a matter of time before Fitzgerald secures Premiere Motorsports Group several of the available 2009 Buggy Championships.

Chad Leising earned another 3rd place podium during Round 8, but had the crowd on their feet when he was leading the eventful race of Round 7. Starting from the last row, Chad launched off the start moving through the field and securing 2nd place by Turn 3 of the first lap. It was clean racing full of great battles right up to the white flag lap when the 2nd place competitor attempted to snake away a win smashing through Turn 3 and right into the #17 Lucas Oil Hart and Huntington SuperLite. Instead the of forcing the line, the #20 drove up and over the front of Leising’s truck and rolled on its side nearly blocking any escape. Chad was able to recover somewhat but had already fallen back to 3rd. Right away it was apparent that there was another problem as the truck was almost unresponsive with a broken axle. Chad faded to a 6th place finish on Saturday. Before hitting the track again on Sunday, the PMG SuperLite Crew jammed for about 14 hours repairing in preparation for Round 8. Sunday’s race was a struggle as well when Leising announced he had zero brake pressure with two laps to go. Being able to make the podium and secure the needed season points was a victory in itself. Chad is still trailing John Harrah by 8 points, but now has to face a new contender, Ricky James who surprised everyone winning both events during his first time racing behind the wheel of a SuperLite . Ricky James co-rode with Leising during Round 1.

So far this season, 3 PMG Drivers alone, have racked up 23 Podiums, 16 of which are direct results from the 2009 Lucas Oil Off Road Series.

Not only was Rockstar’s presence and influence increased on and off the track, but National Marketing Director, Mike Kelso, got into the mix and announced “the most famous words in motorsports” during Saturday’s opening ceremonies. At each race weekend so far, LOORS has created special edition trophies and every racer that fought their way to a podium this weekend, earned a very customized Rockstar Trophy. Later on in the evening Kelso would go on to co-drive in the Rockstar Hart and Huntington SuperLite. Kelso shared his excitement at the end of the night, “I have a decent amount of seat time with my desert racing affiliations, but wow, the wheel to wheel and side by side action was one of the craziest things I have ever done. What a rush!”

The Premiere Motorsports Group compound was host to hundreds of guest, friends, and family. Lucas Oil Off road staff, track workers, and officials often found time to take a break, find an ice cold beverage, or show up just in time for a plate of hot & fresh Chronic Tacos. Private parties, a full size above ground pool provided by OC Pools, and plenty of great people, made the Rockstar Hart and Huntington Pit the place to be throughout the weekend. 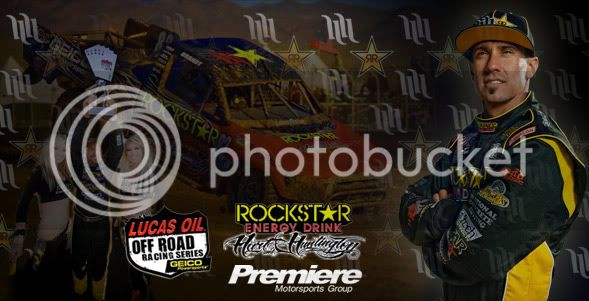