It is a french comic book about a girl named Julie Wood who does bike racing.

She's done it all from superbikes to sidecross to motocross.

It was written and drawn by Jean Gratton, who also penned the very popular (in france at least) Michel Vaillant, another racing series but with cars instead of bikes. Michel Vaillant was huge in France and since I'm canadian we got pretty much everything they got including Julie Wood and Alain Chevalier another awesome french comic with lots of Rallying from two other authors. Michel Vaillant had a really good one on the Paris Dakar.

This particular one came out in '81 I think. I was maybe 5 or 6 when I got it in a used book store. Me and my dad used to go book store hopping a lot back in the days, he was a book worm and a car guy, I was a car nut, so any comic that was car centric was my jam. When I got this one I was like holy poop, the Baja is some seriously amazing stuff. I'm still lovely obsessed with desert racing and I'm 33 now.

I have scanned the pages that contain action and cars and left most of the non-racing drama out.

The research that went into these comics was quite ridiculous, and I thought I'd take the time to share it because some of you might actually know or remember some of the cars that are on the pictures.

The title roughly translates to 500 nutcases on the starting line. 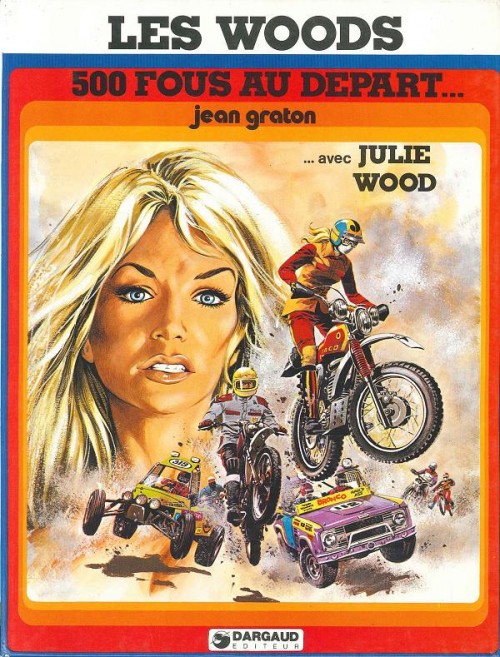 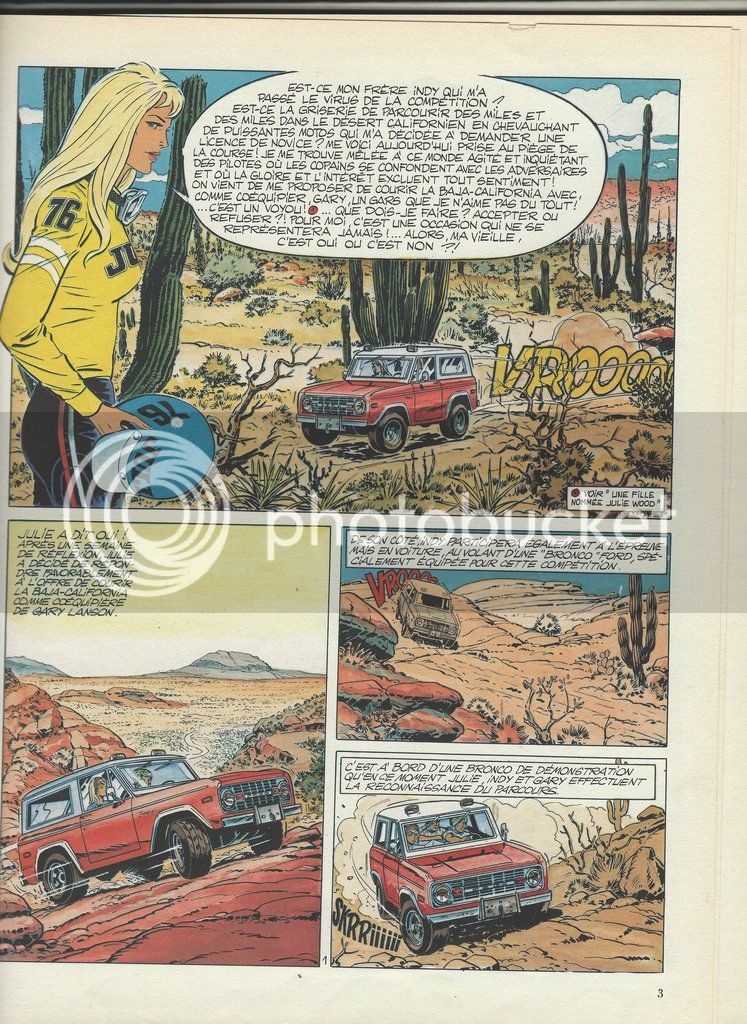 Not sure what year this course was. I tried to research a bit, but haven't really found an old Baja 1000 map archive or anything. Pretty sure it's a real course probably from 1976 to 1980. 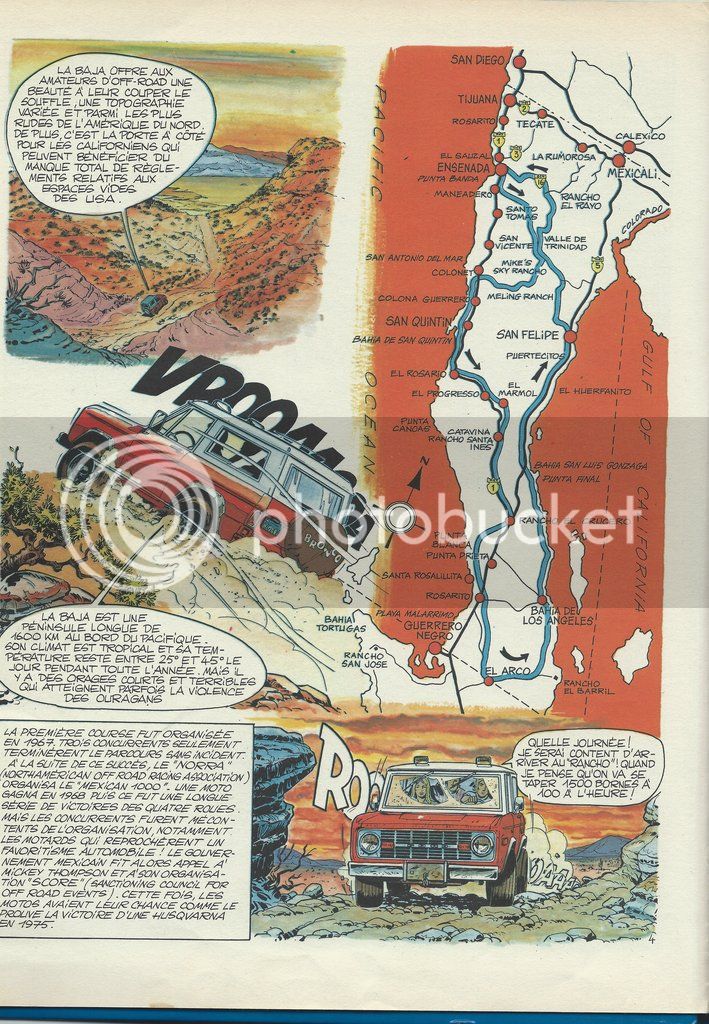 Her Bultaco in the shop. Black hair is Gary her second driver. Blond dude is her brother Indy Wood. 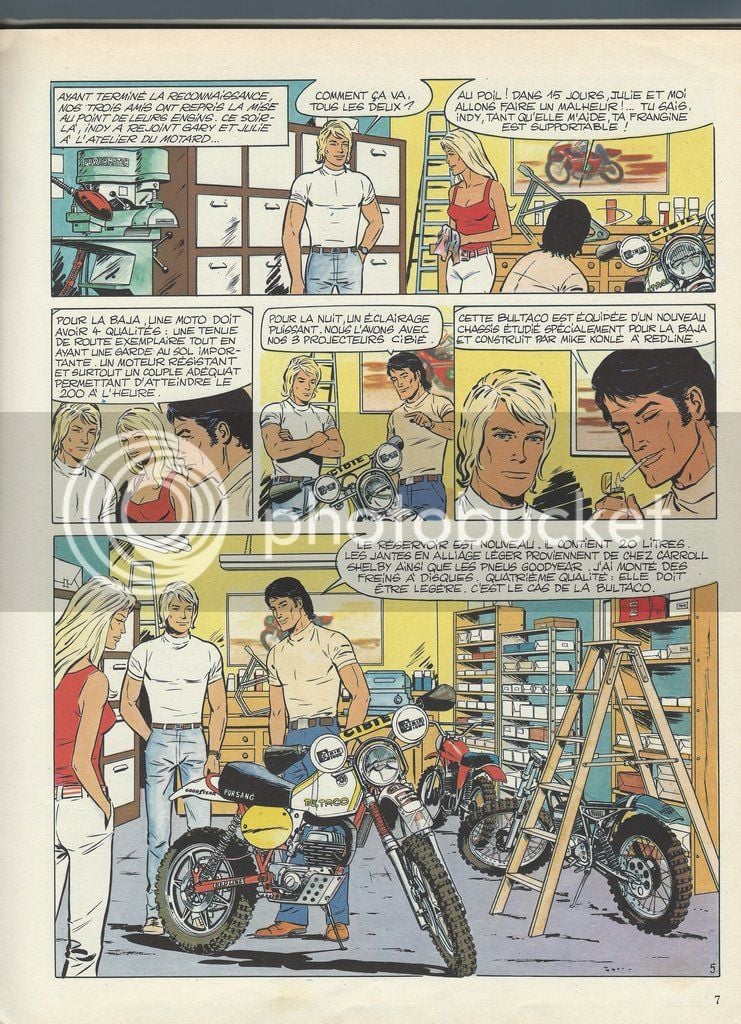 Indy is also in the race with his badass bronco 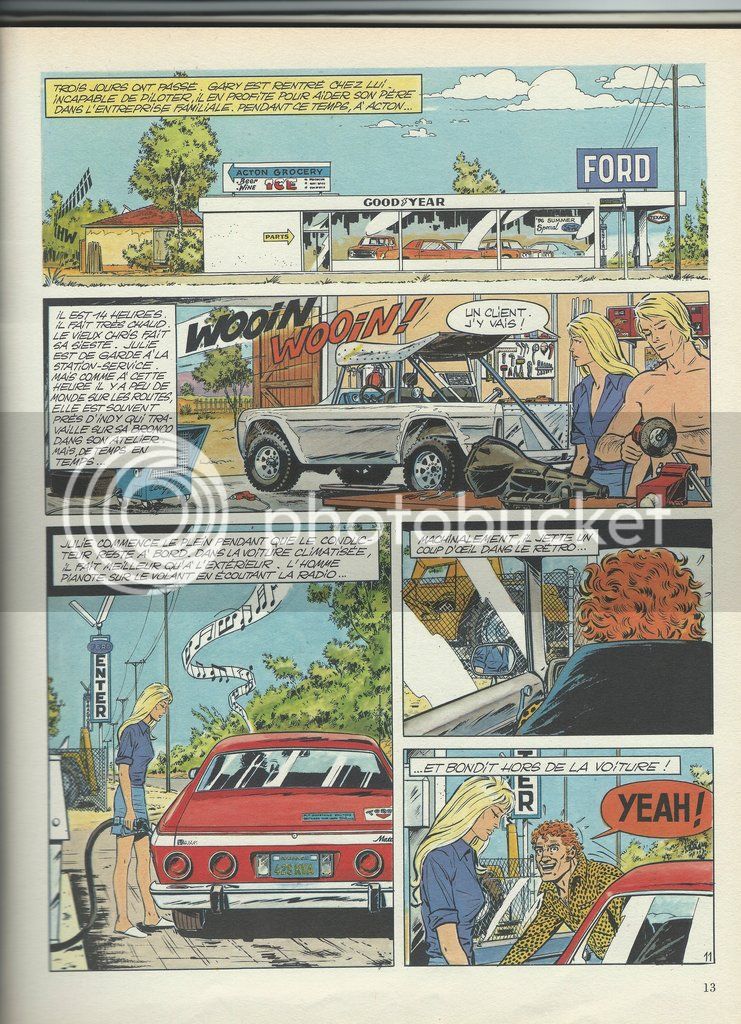 Bad guys up to no good, and Ensenada. (Dude in yellow is Ronnie Walker, initially they are setting up Julie and Gary to be taken out during the race, but Ronnie is a straight shooter and doesn't like to sabotage his races, but he needs a bike to compete so strikes a shady deal with shady dudes). 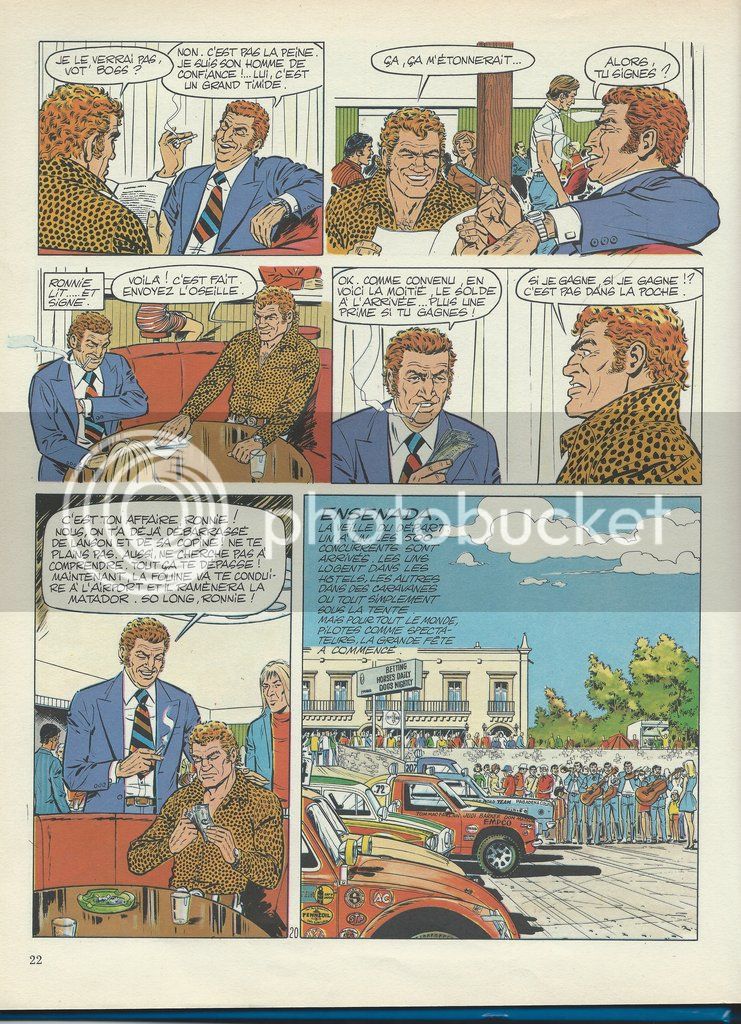 Trucks, cars, party. The blue Datsun in the foreground has two names on it : Jeff Barris and Louise Wooltoe. 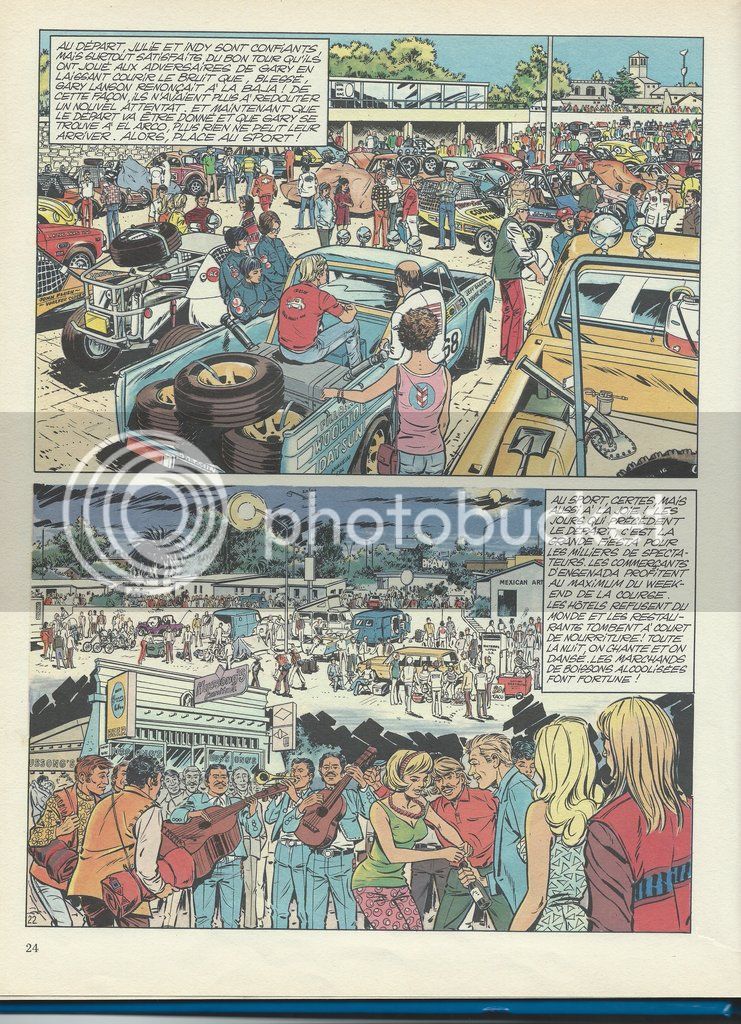 Some vehicle classes on display. The black Bronco mid page has "Dennis Harris" and "Bud Wright" on it. The red Bronco with the wing is Indy's race truck with all liveries. Yellow Chevy bottom left has "Walker Evans" and "Jeff Weaver". 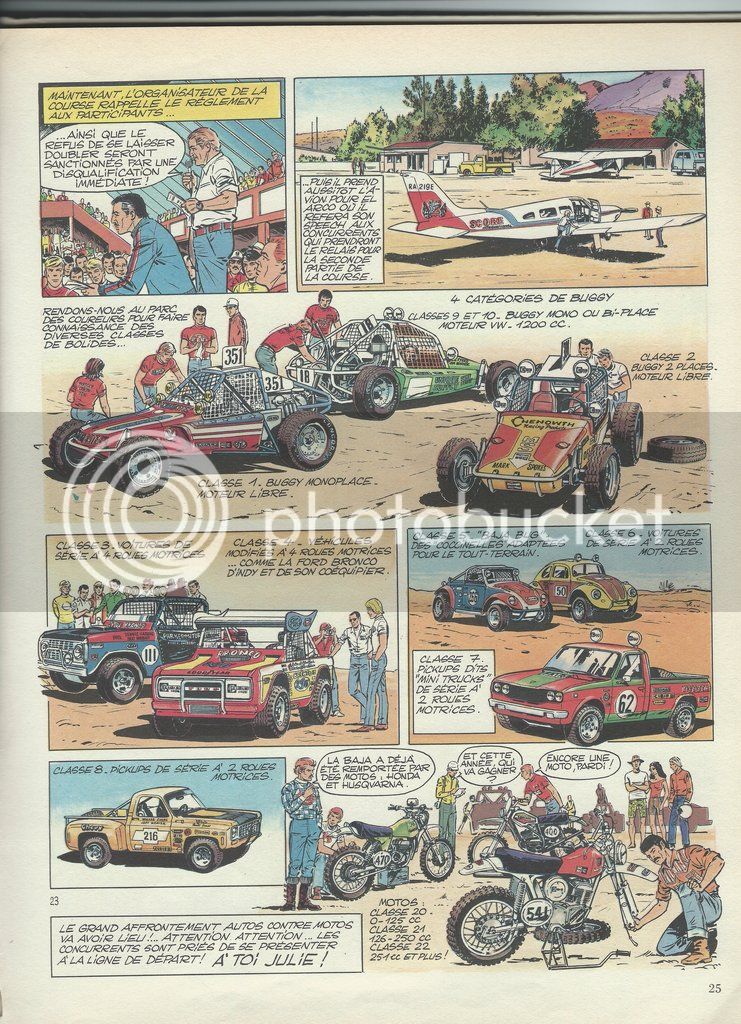 We got ourselves a race 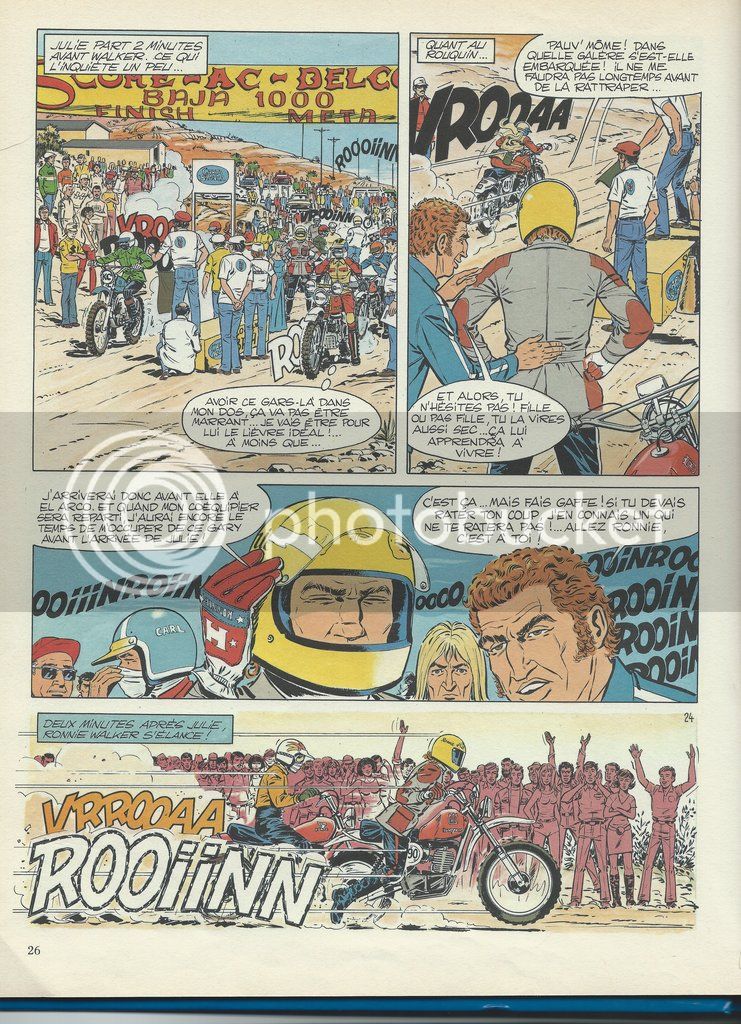 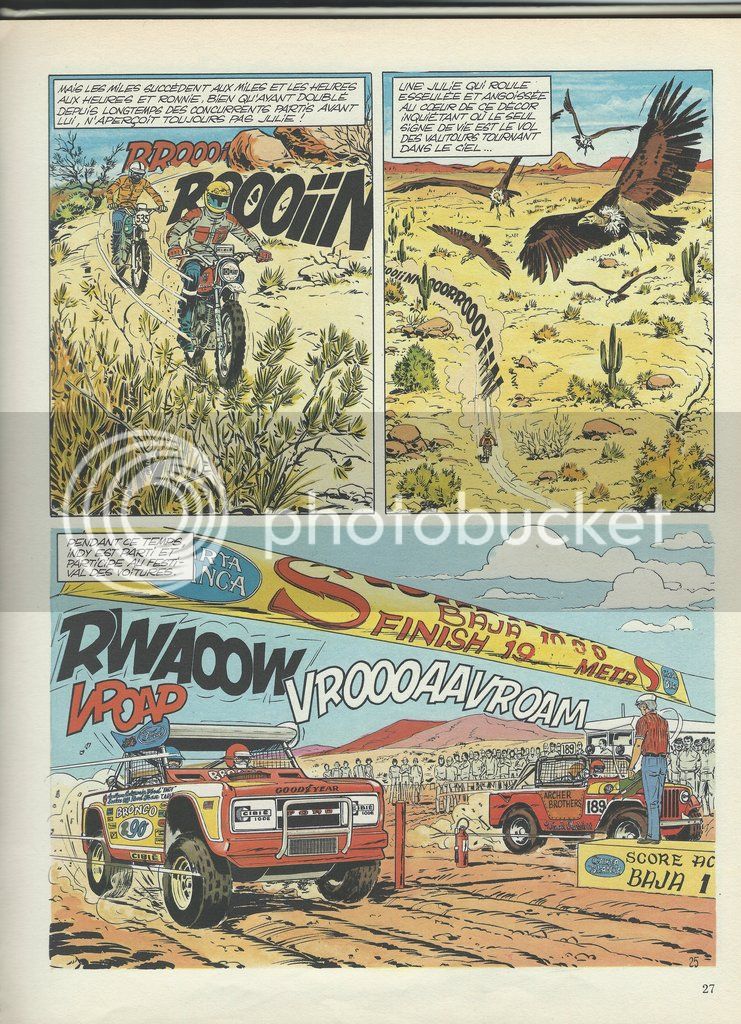 The baja bug has names : Clark Gillies and Chuck Runyen (not sure of that last one, pretty hard to make out) 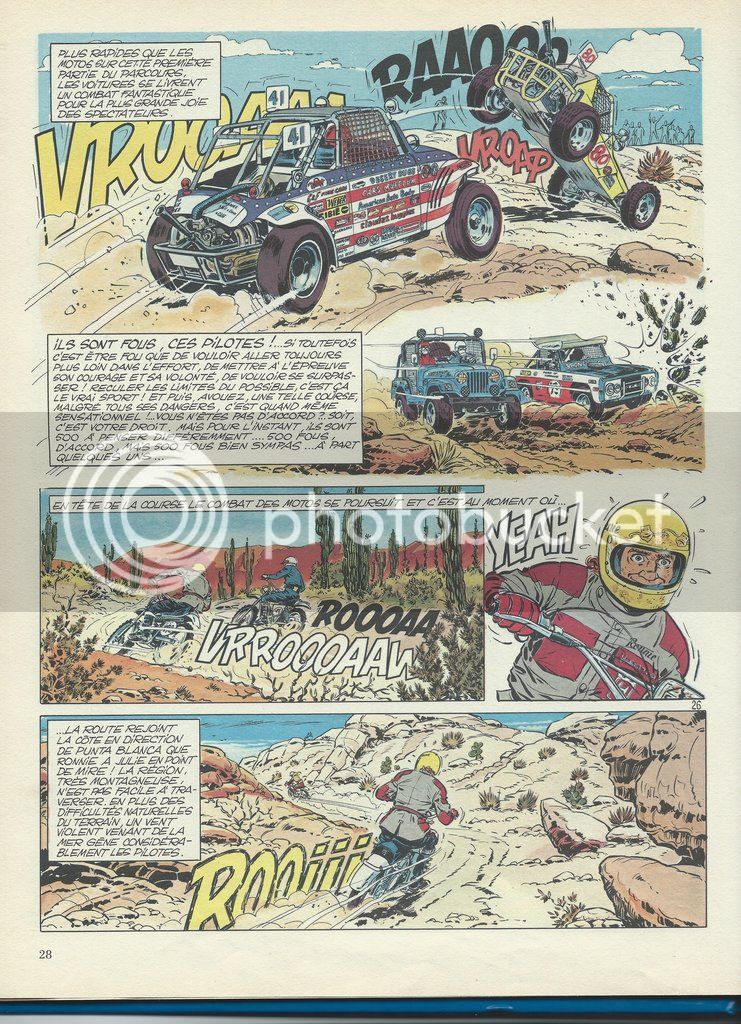 Ronnie coming up behind Julie, trying to plan a dirty move, but she gets swept by a gust of wind and falls off the bike. 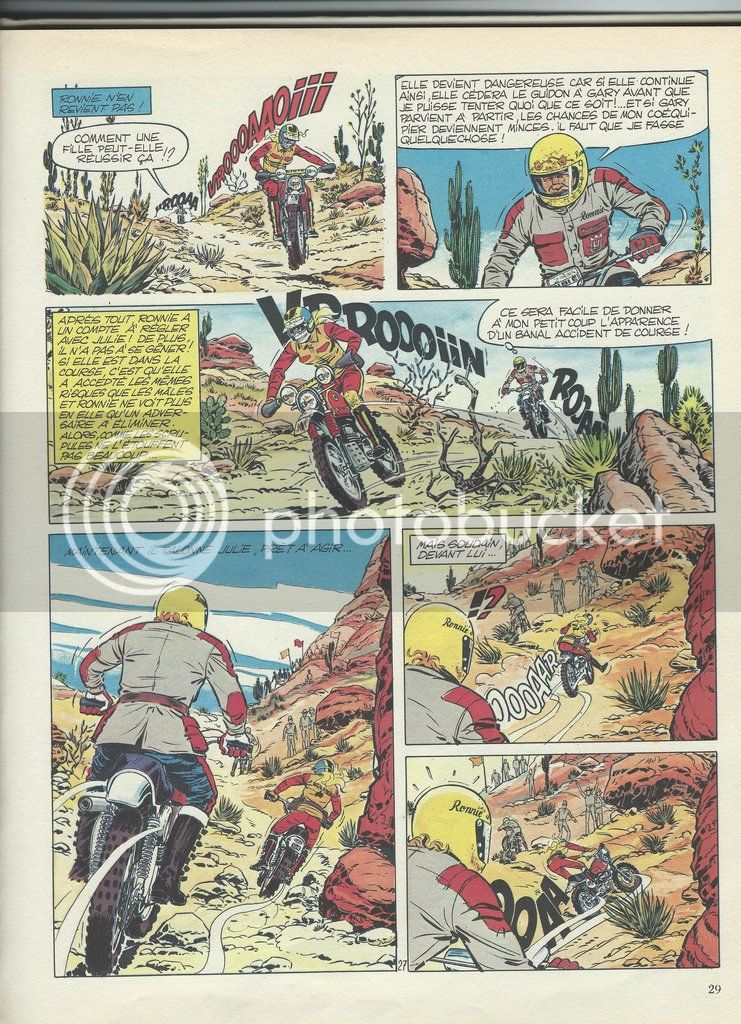 She's obviously not alone, and Gratton goes on about how spectators enjoy gathering up at dangerous spots to enjoy the crashing show, bottom left. Ronnie rides away laughing his ass off but soon realizes he's up against a pretty bad and tenacious bitch. 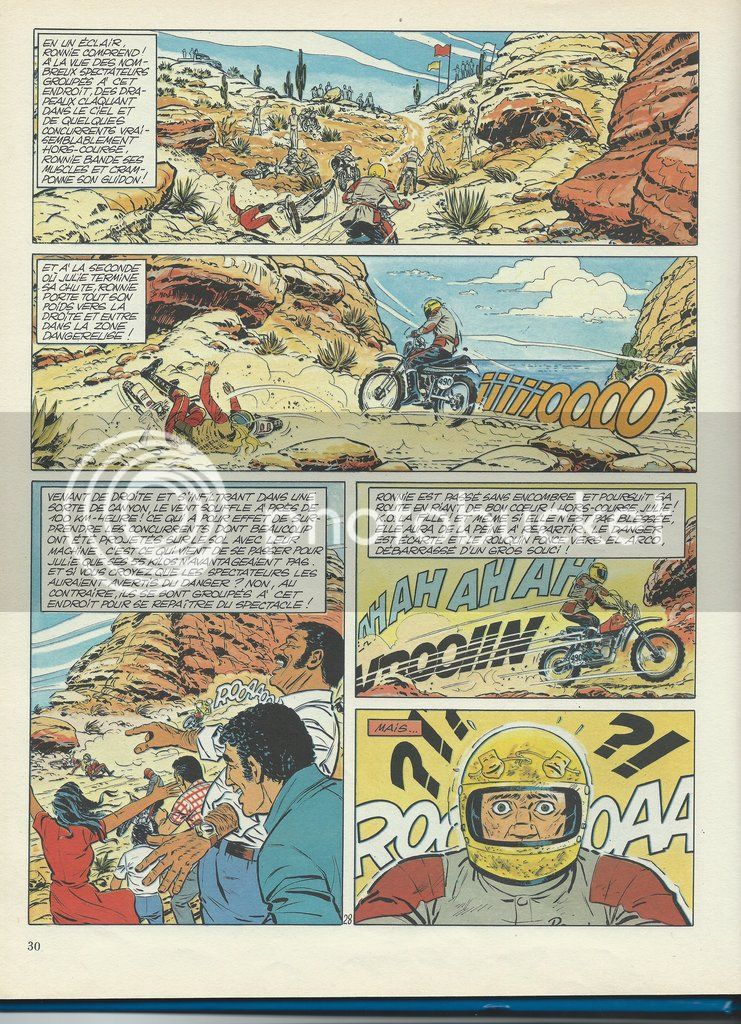 And she's on him again. Bottom right nice wheelie, and Ronnie's bubble roughly translates to "Holy poop look at that, you gotta be lovely kidding me!!" 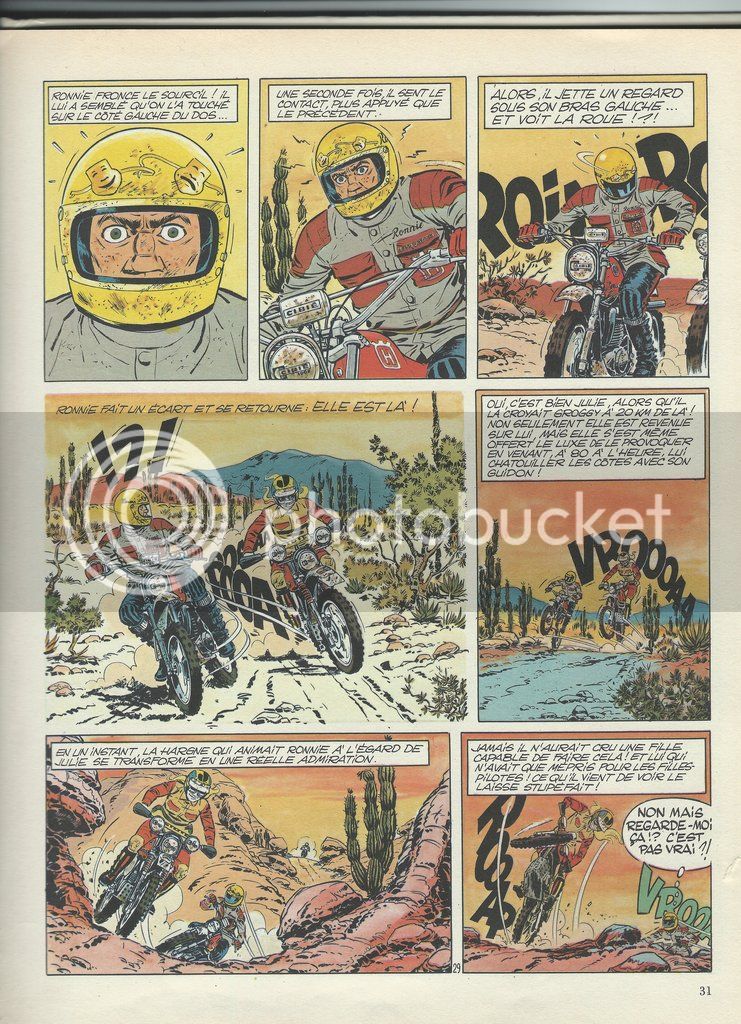 Ronnie poop some more bricks while the sun goes down on El Arco. 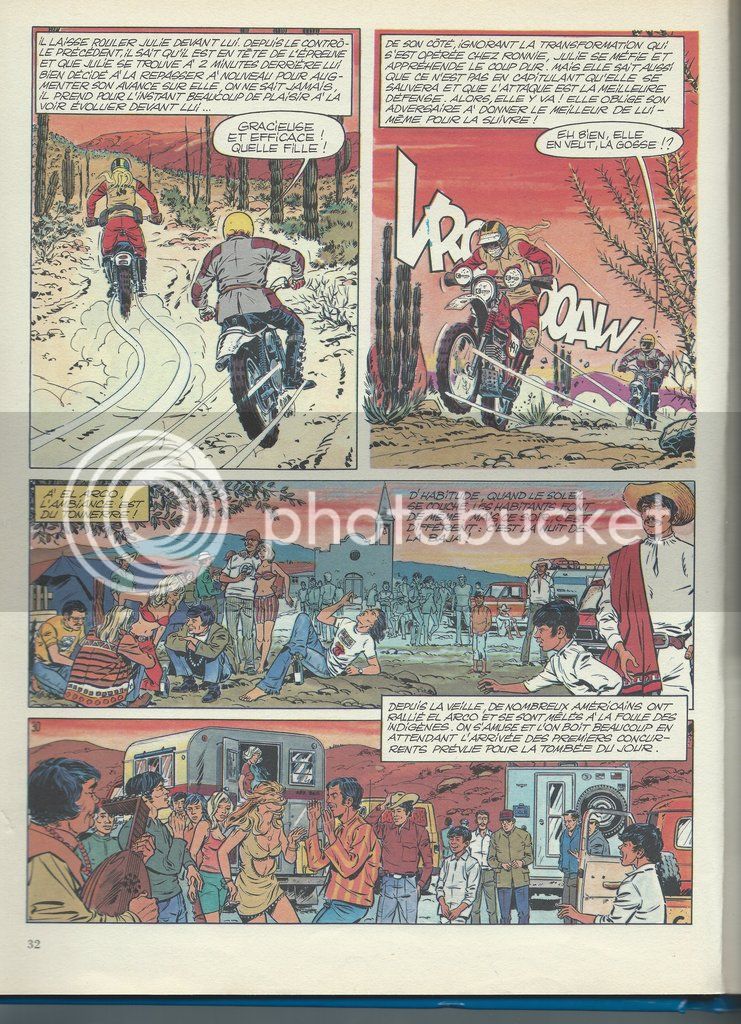 So Ronnie crosses the checkpoint first, and Gary who had been waiting while other riders came in exhausted, is not happy and is starting to get worried. 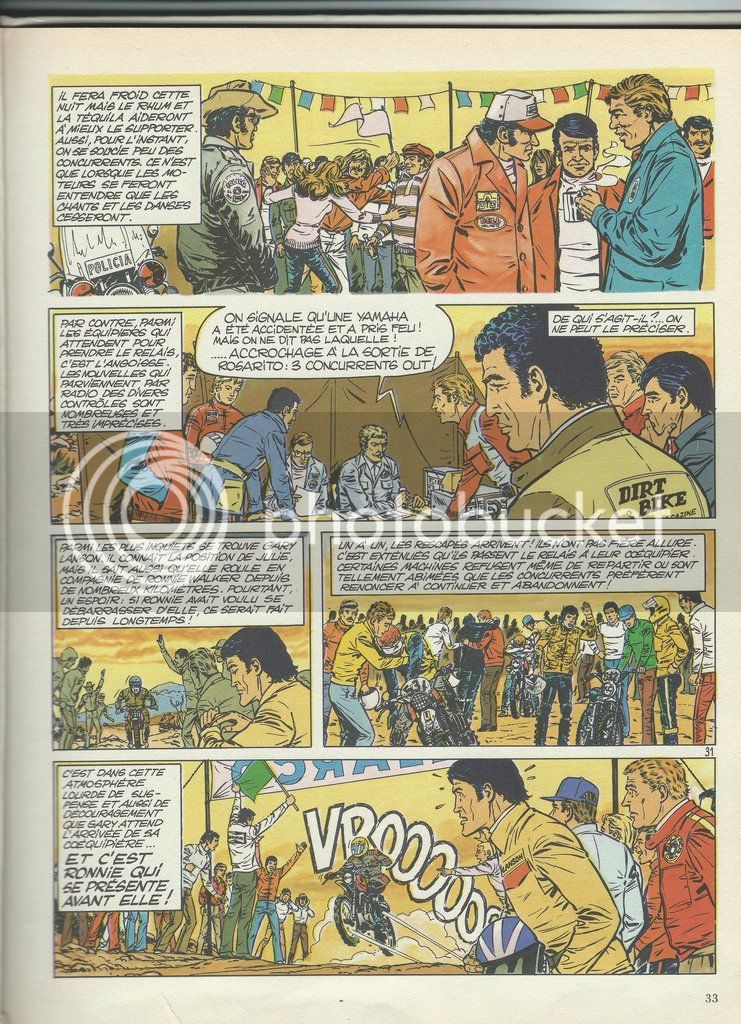 She comes in a few minutes later. Ronnie rushes in and can't believe what he just saw and praises her. He switches sides and sends Gary on his way to complete the race. 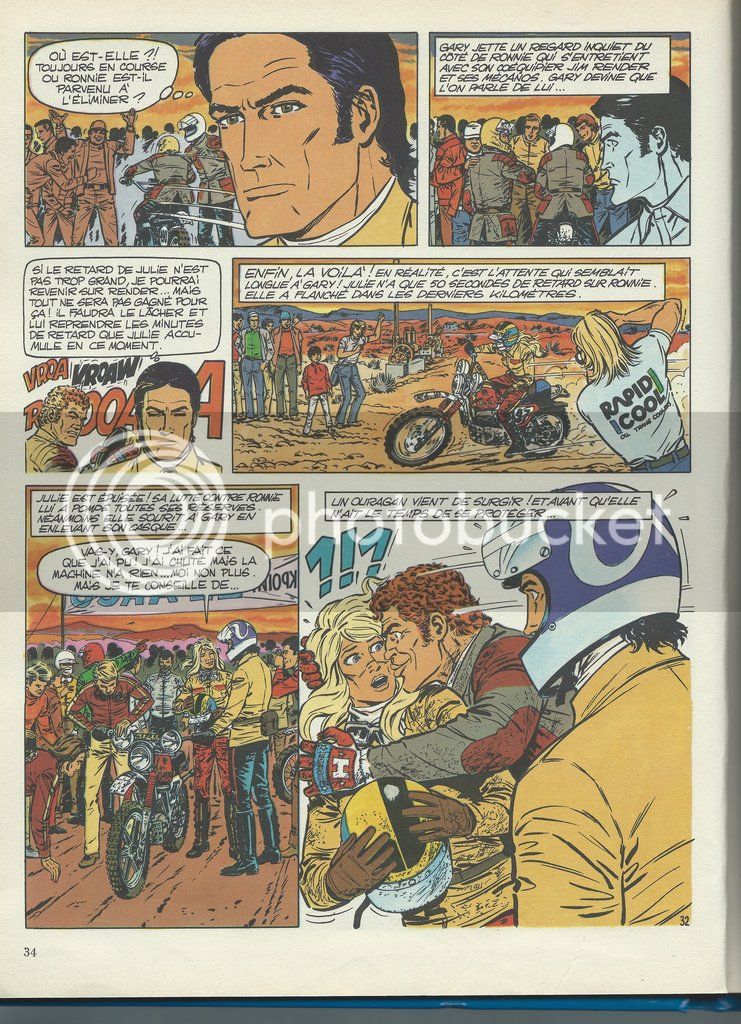 They take a plane to El Rayo to prevent the evil master plan to take place. Indy comes in with the bronco. Some broken down truck. 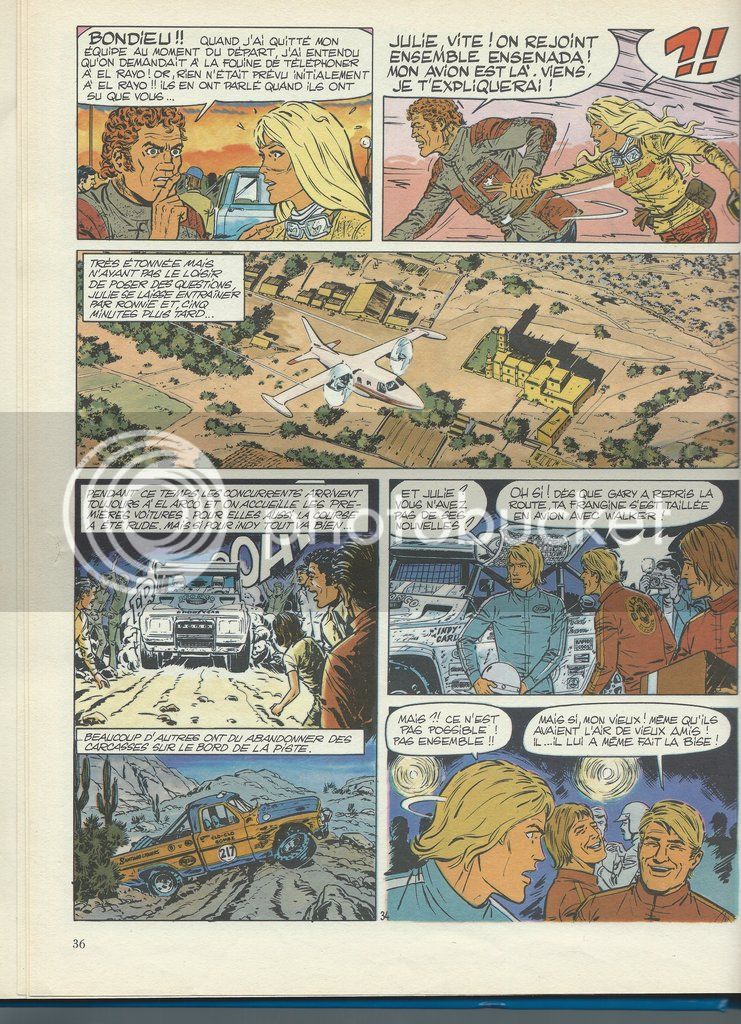 Gary's race in the night 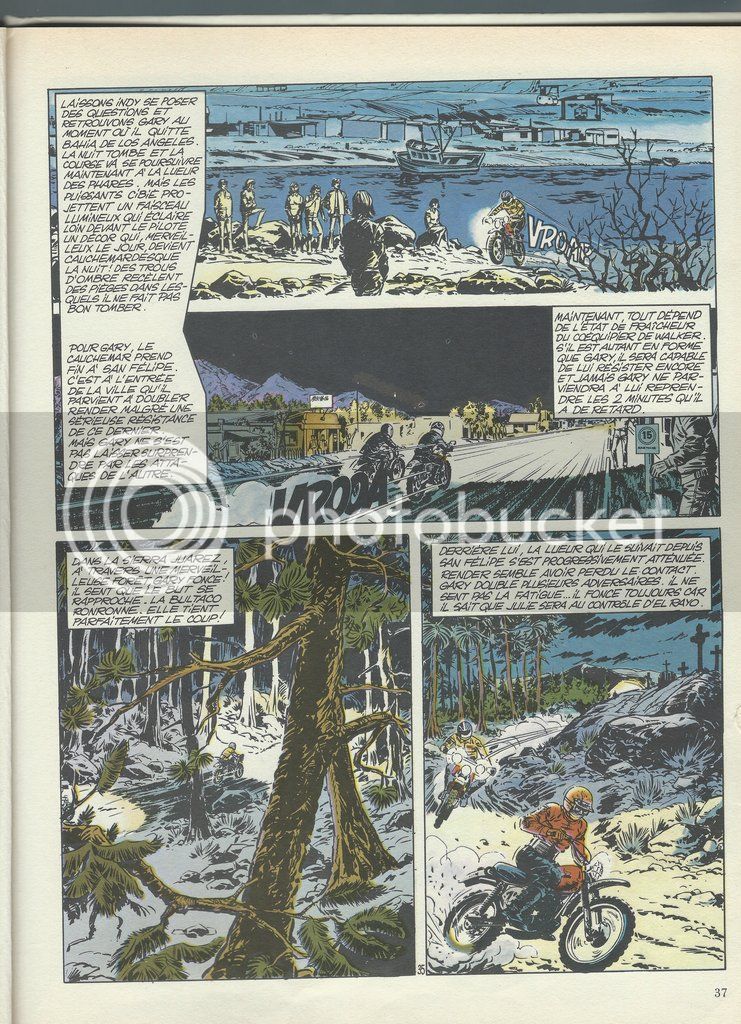 Checkpoint in El Rayo. Julie isn't there, Gary thinks Ronnie kidnapped her. Is pissed. Takes off. 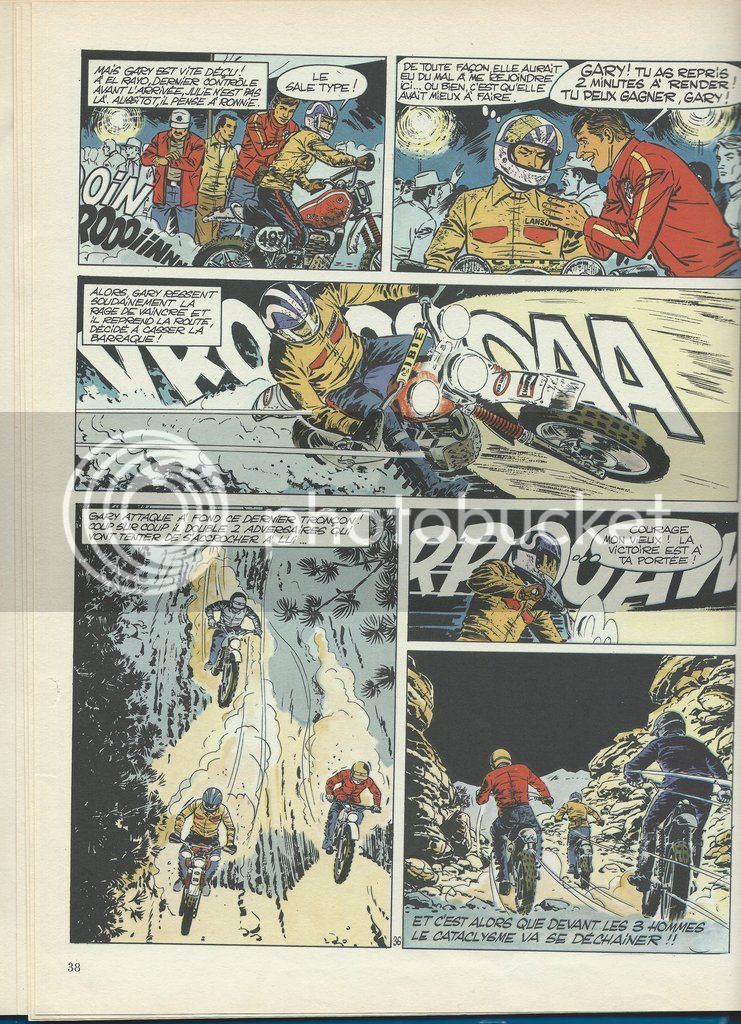 He races for a while until all of a sudden he and the riders alongside him are blinded by headlights. They abruptly brake and the whole lovely mountain explodes right in front of them. 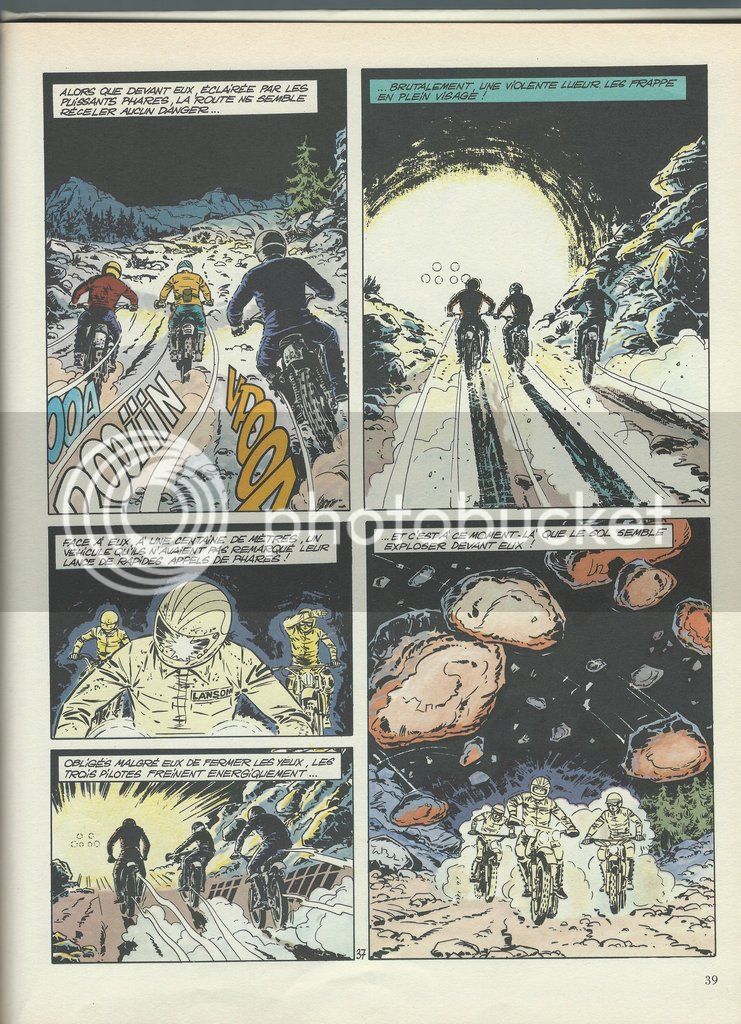 Someone calling Gary's name in the dust 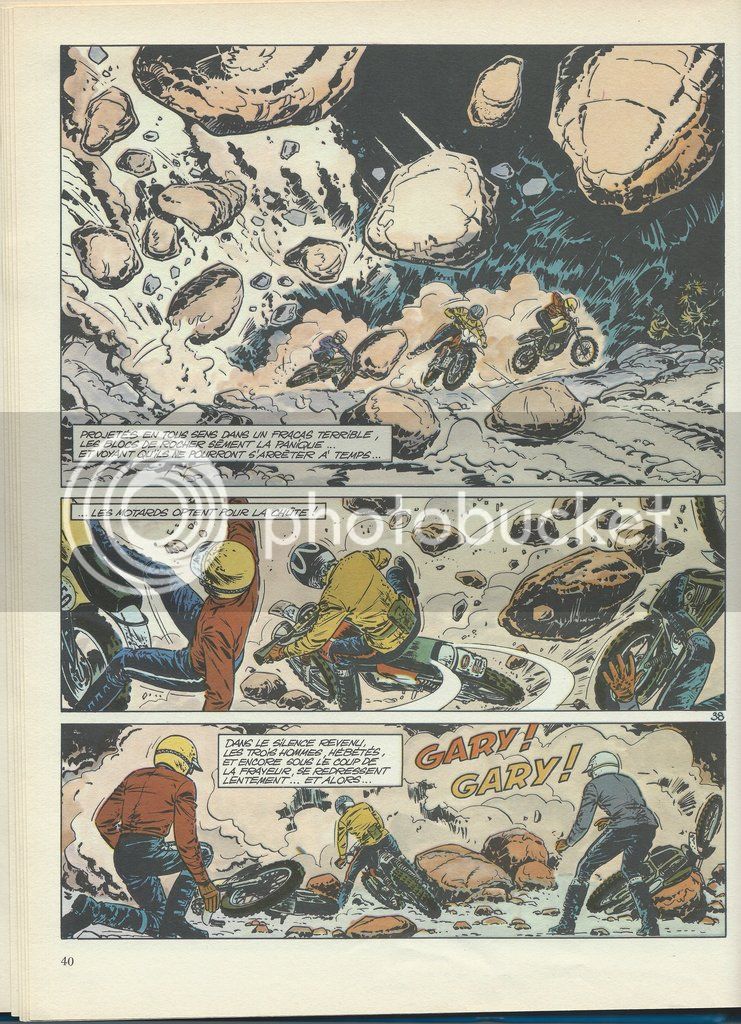 It's Julie and Ronnie, they were the ones who arrived in the truck just in time to warn the racers. Ronnie argues for a short while cause that's just what he does and everybody is sent back on their way. 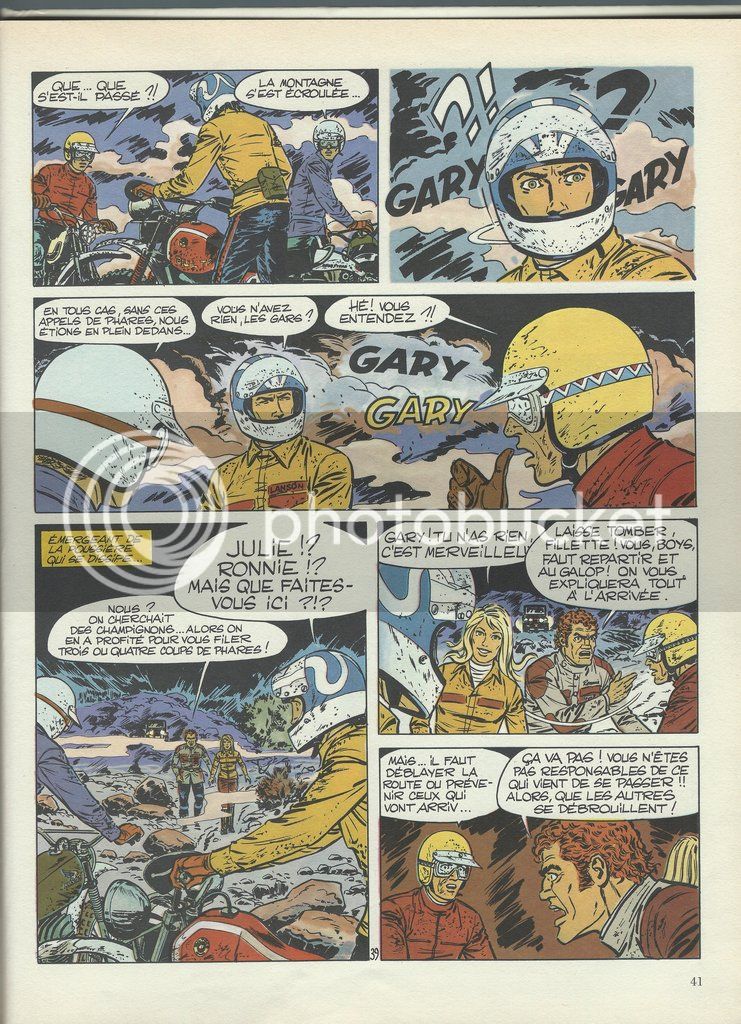 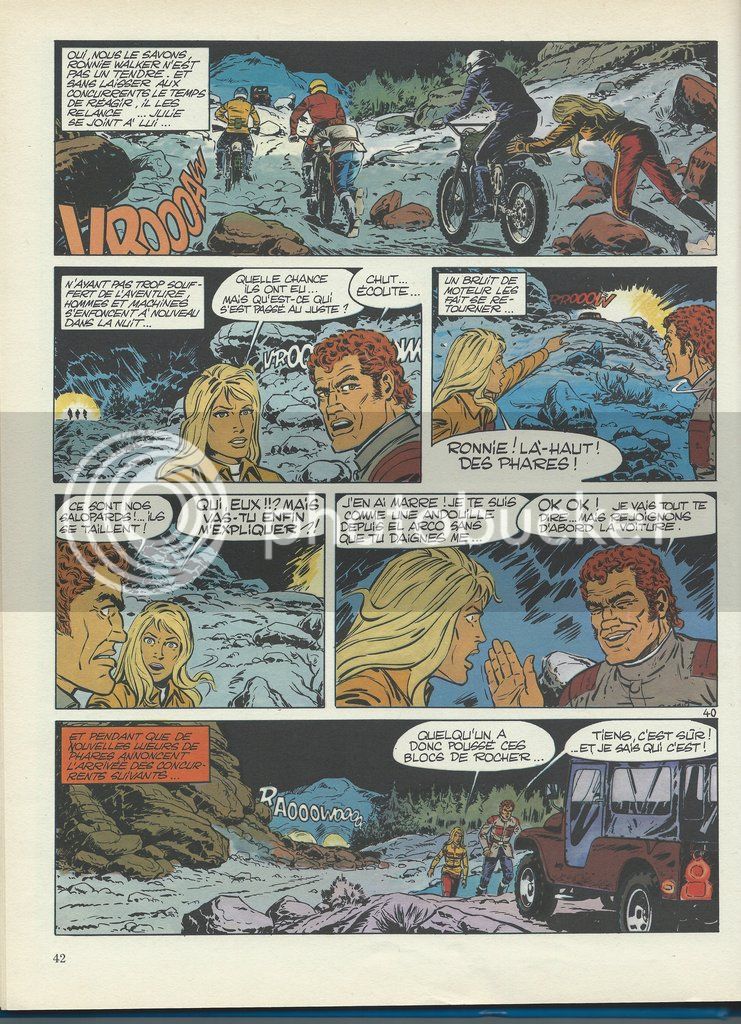 Julie and Ronnie arrive back to Ensenada just in time to watch Gary win overall. Ronnie is escorted out by shady looking dudes and is not seen again until a couple issues. 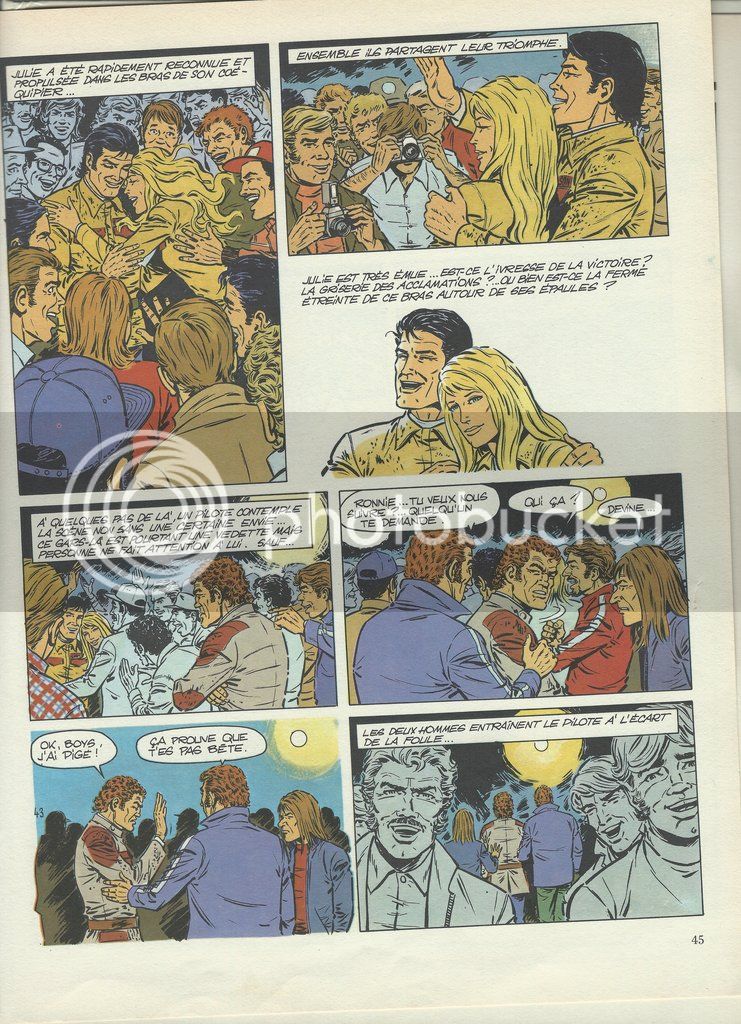 Ronnie makes a comeback in this one : 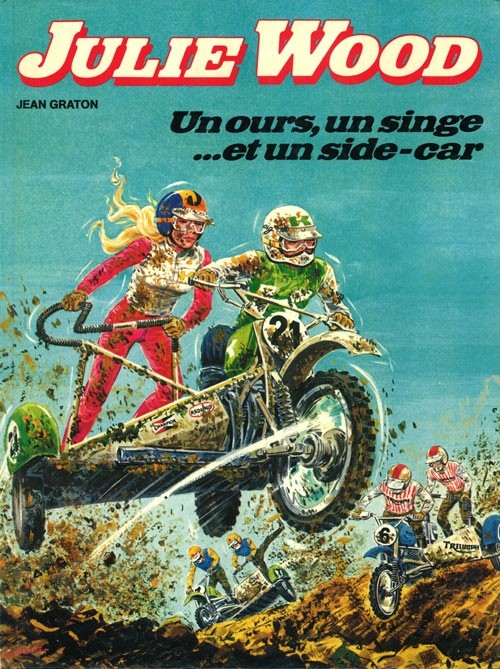 Those comics were a pretty big chunk of my childhood
Last edited: Mar 19, 2016
Passion never sleeps

Awesome
"The strongest reason for the people to retain the right to keep & bear arms is, as a last resort to protect themselves against tyranny in government." Thomas Jefferson
B

I'm guessing mid 1970s, Some actual teams I recognize in the Baja bugs and class 4s. Even the names are correct. Now if we could just get the English version.

I can understand "VROOAAA RAAOOO VROAP", but not French.
What is going on on page 32, brothel camper?
Thanks for posting, that is way cool.
J

Bro_Gill said:
I'm guessing mid 1970s, Some actual teams I recognize in the Baja bugs and class 4s. Even the names are correct. Now if we could just get the English version.
Click to expand...

Unfortunately there are no English version of any of them. They were strictly french comics from France with a significant number imported to Canada. Jean Graton had his french hero Vaillant on cars, and his american woman Wood on bikes.

Both series crossed over eventually when Vaillant signs up for the Paris-Dakar in a Range Rover and she does the same on a bike. Her own series ended in the early 80's and she lived on throughout the years in various Vaillant issues, falling in love with his American friend Steve Warson.

I have this one too, actually I have most of them. 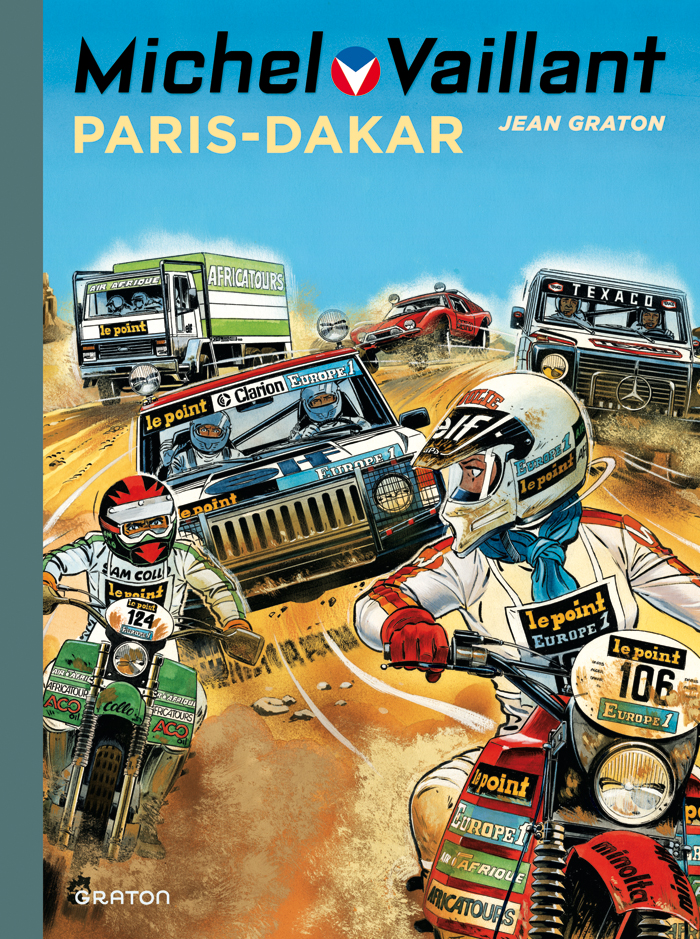 They made a movie about Michel Vaillant where Diane Kruger is playing Julie Wood, but they make a hash of the story arc of the comics, which didn't go quite well with the fans.

OVLWNDO said:
I can understand "VROOAAA RAAOOO VROAP", but not French.
What is going on on page 32, brothel camper?
Thanks for posting, that is way cool.
Click to expand...

LOL Yeah its just a party.