Tips for Baja Edge of Control

I've figured out that buying the top level suspension package is the reason the cars/trucks tip over so easy. It raises the ride height up so high that they become top-heavy. If you stay with the lower-level suspensions, they will be much more stable. Of course they bottom out more, but I'll take that over rolling every time I try to turn the damn thing.

The arcade-vehicles don't have this problem though, even the arcade-truggy handles pretty good.

I got the best suspension and tuned the springs as low as possible, then put the shorter spring a bit stiffer. It is backwards to what it should be but you get lower ride height and still dont bottom out as easy as having all the springs down all the way.

Also make sure to buy the suspension upgrade and just crank all the shock settings to max, since they are better they don't wear out that fast. The rebound and compression don't seem to matter much tuning-wise. I've never had a problem in a whole 20 min stage where is was bad enough to call in the chopper, besides pit stops are inevitable on the long races so the shocks just get done then if you really need them to.

Dude this is funny. Do you guys here what you are complaining about? Tuning suspension, buying springs, transmission gear settings,,,, You could still be playing pong or solitaire! Sounds pretty cool to me.
Tapped is what I do,,,, T-Baggin is in the blood!\m/

tapped1069 said:
Dude this is funny. Do you guys here what you are complaining about? Tuning suspension, buying springs, transmission gear settings,,,, You could still be playing pong or solitaire! Sounds pretty cool to me.
Click to expand...

Exactly why I think this game best represents what we all love here! Stop complaining about its problems, all games have problems. That's what sequels are for.

vaderoni said:
Exactly why I think this game best represents what we all love here! Stop complaining about its problems, all games have problems. That's what sequels are for.
Click to expand...

I was playing my dad's Baja Edge of Control game and went up some hills.When I was up there I ended up in a big white house.In frount of the house is a globe that says,"THE WORLD IS MINE". Now I think this house is Scar Face's house.I rode all around it and there was guns at every corner! There was a helicopter pad, a tennis court,a basketball court and a pool shaped like a gun. It was pretty hard to get to the pool but i managed in a troghy kart. TIP: WHEN YOUR ON THAT RODE THERE WILL BE A SIGN THAT SAYS "DIRT LOGIC" and on the other side it will say"TORO RANCH". One thing I would like to know is if the house is real,if you know please reply.

Do you know what map it was on? I'll take a look for it.

I know the house in the game. I'm 98% sure it's in the Cabo track.
Don't bother me. I'm wasting potential.
Life's a grave, dig it.

Found it. Pictures and directions soon (for those who want them).

Turns out the house was surprisingly simple to find. This'll make it even easier: 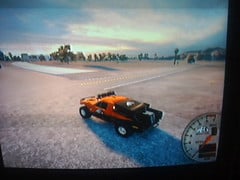 Go down this road until you see a Dirt Logic billboard on the left. 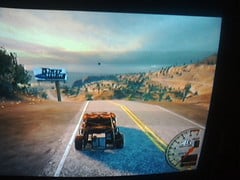 This will take a few minutes, so be patient.

As soon as you see the Dirt Logic sign, jam on the brakes. The road to the compound is directly behind the sign. Said road is a simple dirt trail and if you're not looking for it you can easily pass it (especially if you're from urban Massachusetts and aren't used to dirt roads). 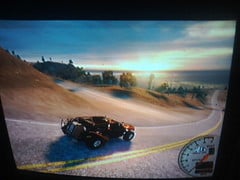 Follow the road and you'll be there no problem. 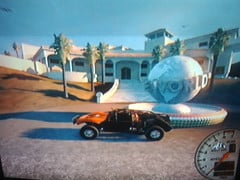 As for the pool... I wasn't able to get into it with a Trophy Kart, but then I'm not nearly as skilled with a TK as Stephy
My method of entering the pool was with a Trophy Truck and a heavy throttle foot. I used the hill above the gun/pool to launch myself over the wall. 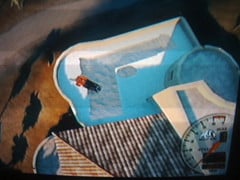 As for exiting the pool, same tactic. Heavy throttle foot. The stairs in the pool at the barrel end of the gun will launch you back over the wall and out of the pool area.