Draw it up! CAD drawing, cardboard cutout, photo, napkin, whatever. We plan on bringing a large enough generator to do some actual cutting at Primm. The system will be cutting out a BITD logo or something unless you need parts cut. If you need brackets or tabs or anything else, then just come by and ask. We are pretty easy, so be nice to my guys and they will cut just about anything for you.

We will bring a couple of sheets of 3/16" mild steel and probably some 10 gauge. If you need brackets or anything else cut from something thicker, then just bring the material with you. The Thermal Dynamics A120 plasma cutter that we will bring can cut 1/2" all day. Take advantage of the machine and my technician being at your disposal. We are there for you! I will try to bring one of our Thermal Arc welders too. Let me know if you have any questions. Feel free to email me direct at bill@torchmate.com

Thaks for the offer! I know i'll have a couple pieces there. cool thing you guys do.....
N

that's very cool of you to offer up.
www.NicksTrix.com

how bout u "cut" me a check and we can put a two foot tall, ten foot long logo on the TT.............CHEAP
I RENT trophytrucks and bajalite trucks for all races in north america...BAJARACINGADVENTURES.com

This is a very cool thing for you to offer! Thank You!
Chuck

ALWAYS PIMPIN' I think you missed your real calling in life....or did you...
If you think can or can't,your right!!!!

Shannon said:
ALWAYS PIMPIN' I think you missed your real calling in life....or did you...
Click to expand...

maybe they can cut it out on the spot and we can bolt it to the side of the truck!!!!!! now thats promotion!!!! i feel like don king......................
I RENT trophytrucks and bajalite trucks for all races in north america...BAJARACINGADVENTURES.com

Gee!!Thanx!! for that image!! Don King with a mullet Now I wont be able to sleep tonite!! All you need now is some flags to wave around before the race.
If you think can or can't,your right!!!!

troyharper said:
Are you gonna be in the contingency area?
Click to expand...

Yeah, we will have the trailer in contingency. We just had it wrapped. It will be tough to miss!
Torchmate #7231 & 703
Thanks to Amsoil, BFGoodrich and Ford

Bill did u end up doin any work to interior or anythin else on the 7200 ?
Q RACING
GBOFFROAD

Right on!!! I need a coulple brackets cut out. Will use what ya have for sure as long as I can get there in front of the Don King of off road promotion!!!!
thanks again.

LANDIN7 said:
Bill did u end up doin any work to interior or anythin else on the 7200 ?
Click to expand...

We sure did. New polished aluminum dash, RacePak, 10" GPS for Navigator, moved old GPS to left of driver. Rewired everything. Ditched all the fuses and went to breakers. Went down to Lucerne and Barstow to tune the shocks. It is like a new truck. We also moved the fans around and boxed in the rear end. I could not be happier with the way it has turned out. It is still a work in progress, but now it is starting to feel like my truck. Not that there was anything wrong with it before. Just needed a little updating. I don't have any pic's or I would post them up. We will have it on display next to our trailer at tech. Be sure to look inside!!!

Huge thanks to Shaffer's Offroad in Carson City for doing all the work!! It has been no small undertaking.
Torchmate #7231 & 703
Thanks to Amsoil, BFGoodrich and Ford

I am getting a lot of emails and PM's as to what file types will work. .dxf files are great, but we can convert just about anything into a vector file for the machine to cut. When in doubt, save the image in a couple of different file formats and bring them on a jump drive. We will figure out how to get it done. Other folks have asked about stainless or aluminum. We will only have mild steel with us, so bring the material if you want something different.
Torchmate #7231 & 703
Thanks to Amsoil, BFGoodrich and Ford

I want to thank the Torchmate guys for the cutting the parts for us at the TT250.

We had some steel and aluminum cut, and they came out super nice. It was surprising fast too for how clean the cuts were.

With the amount of money we spend at having parts cut, I could really see having a table in our shop. I think the only problem would be hiding it from your free-loading buddies! "Hey bro, could you cad this up and cut for me? I'm trying to box in the frame of my school bus...it's should only take a minute"
Jeff
_________________________
UPR Racing Supply
Desert Rat Off Road Centers
Head and Neck Restraints
Racing Suits

Thanks again for your help, Torchmate is a stand up company.

that table was pretty bitchen. i heard i missed the free beer bottle openers
But I said with all due respect!
Baja Fools
S

Here's our race story. I thought we were dead last but finished just ahead of the Raptor!

Anyone other than a fighter pilot would be shocked at the sight of an unlimited desert truck screaming through the terrain. Having participated in my third desert race, I am still awestruck by the power, violence, and danger of these machines. Soon after the start of the Terrible’s Town 250, I stood in Pit #2 and watched a distinct trail of dust rise 10 miles away. The dot at the head of the plume quickly made its way around the mountain range until I could see a dust cloud rise above the near horizon. Tension could be felt in the pits as everyone rose from their chairs and inched toward the course. Hands went up and everyone cheered. I caught sight of the leader. The truck floated over the bumps like a hovercraft and suddenly lurched sideways. The driver was undeterred and never let off the throttle. He got it straight again and shot by us at well over 100 mph. The roar of the engine was deafening and the top layer of dirt and rock literally rose behind the tires. Rocks pelted our pit trucks over 20’ away and I felt the excitement of a little boy at Christmas. Sensibility left and I fidgeted for the next three hours waiting for my leg of the race.

Before I tell my story, we better rewind to the mornings race of the slower (everything is relative) classes. Leaving the start line shortly after 6 am, Lance Clifford took the wheel of the #1705 Torchmate Jeep with navigator Mike Shaffer. The 2008 Best in the Desert champion team was well prepared and in the hunt for a top finish. After starting near the back of the pack, Clifford came through the first pit in third place. While necessary for a win, the daunting pace was taking its toll on the Jeep. The gears in the front axle were the first to go after a hard landing. Next, the rear driveshaft separated due to some unnatural flex in the suspension. These were small problems compared to the unseen damage in the transmission that eventually took 2nd gear. Clifford commented, “You run everything in 2nd and we were forced to max it out in 1st gear at about 30 mph.” The pair ran as fast as the engine allowed but slower teams were able to gain. #1705 eventually crossed the finish line in a respectable 5th place.

Now back to pit #2. Bill Kunz and I watched the computer intently and finally saw our tracker show movement on the course. Teammates Jones and Bolton had started the race and the 19 starters in our class spread out over the first few miles. We soon got a report from pit #1 that a caliper had been damaged and the brakes were failing. Regardless of the damage (or danger) #7231 kept pace and was quickly through pit #2. We anxiously awaited any radio traffic of progress and soon heard both good news and bad. The Torchmate Ranger was well into its second lap but entirely without brakes. As the intensity grew, we again caught sight of the truck as it rolled to a stop for the crew change. The wide eyes of Jones and Bolton instantly told the harrowing story of racing a truck with no brakes and gave me insight into the adventure that lay ahead.

Fortunately for me, some wrenching, clamping, and hammering by the pit crew got us rear brakes and we blasted out of the pits into the unseen desert expanse. Only a mile later we sailed by a lonely $400,000 pile of burnt rumble that only hours before was a high end race truck. There were no camera crews as in NSACAR, no mob of fire personnel, and no tow truck. Just a defeated former truck smoking in the sun and a reflection of the seriousness of desert racing. We continued on, bouncing over the whoops and weaving through the sand washes. Bill’s excitement periodically rose as the brakes faded and we pummeled corner embankments. Mine did as well when the GPS read 101 mph on a dry lakebed. We finished our first lap and found a great pace in the miles of rocky washes near the start of the course. Suddenly, the truck as upset by an unseen boulder buried in silt. The sharp jarring monetarily slowed out pace and we felt a strong vibration and the unfortunate sound of metal on metal. I jumped out only to discover a broken front suspension link. It appeared that the damage had been done so we pushed the Ranger another 55 miles with a loose and clanking wheel. While our pace was badly hampered we still managed an 8th place finish.

A sincere thanks goes to the whole Torchmate crew that made this race possible. While The #7231 Torchmate Ranger undergoes repairs for the upcoming SCORE Baja 500, the Torchmate team heads back to the rocks for round #2 of WE-Rock in Cedar City, UT May 2nd.
Click to expand... 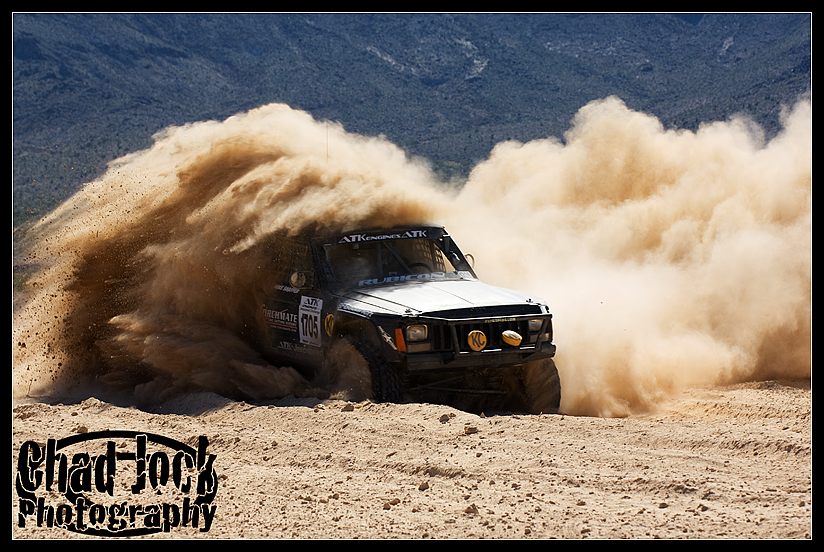 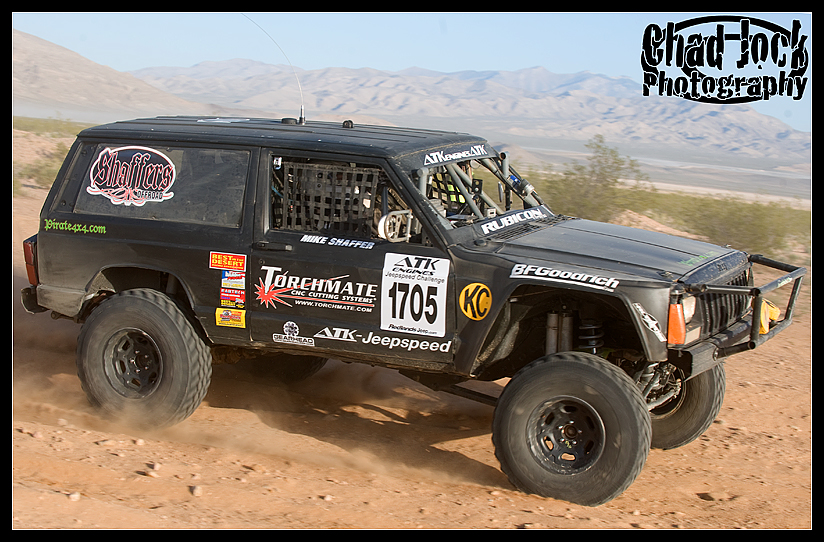 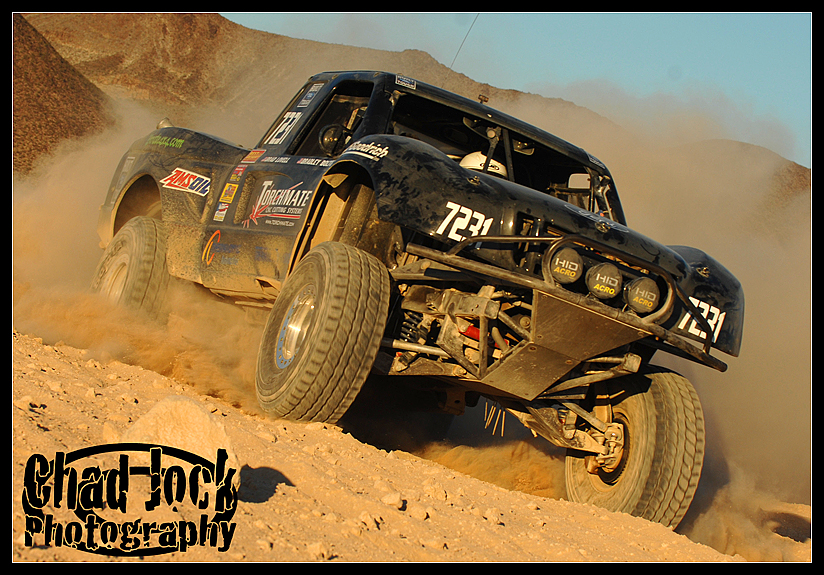 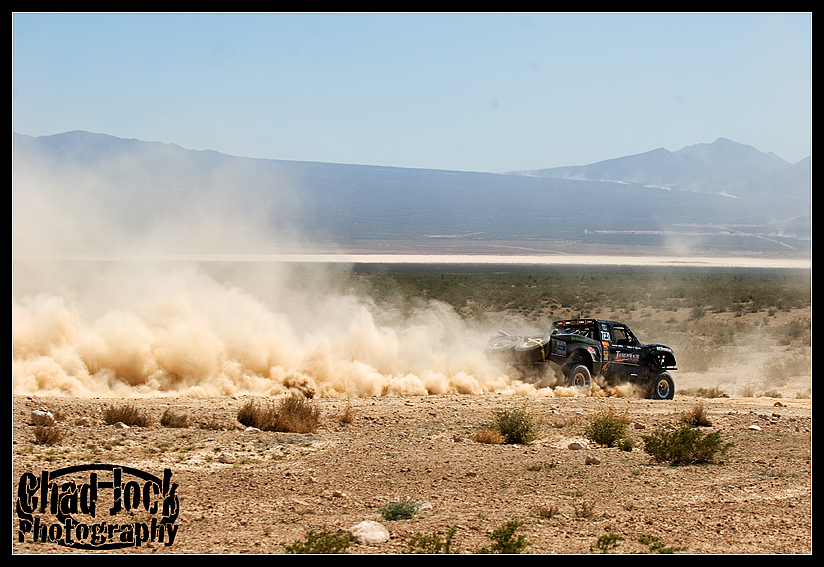 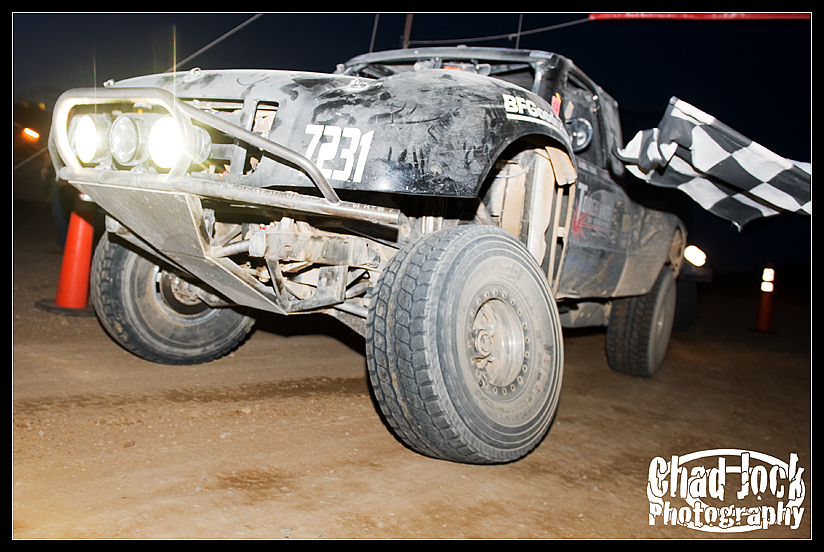