This year marked TPF Racing's third consecutive entry in the Mint 400. In spite of being stuck in London 5,000 miles away I was able to make it out for the last two years but decided this year to keep myself on the bench. I'll be saying goodbye to the Air Force after 20+ years at the end of this year so I figured I needed to focus my time and energy on the transition to come. However, the Mint is too big of a deal for us to skip outright so Khris Kading and our great group of friends took it upon themselves to keep our streak alive.

We did the whole deal again this year including the parade which was awesome as usual. Our friends Robert and Toby came down from Colorado for the weekend to help us out and did the honors of cruising the truck down LV Blvd. Last year we were working on a few projects that made the lead up to the Mint a bit hectic but we skipped all that this year so it was pretty smooth sailing all the way to Saturday morning.

We've invested a lot of time and effort in to helping grow Class 7100 over the last two years and we're very excited to begin seeing the class bear fruit. This year we had 11 trucks signed up and while a few unfortunately weren't able to make it to the starting line we still ended up with 8 trucks in class, double the 2015 entry. Like previous years we opted to rear start and Khris and co driver Keith Wilshusen took off Saturday morning chasing the pack. 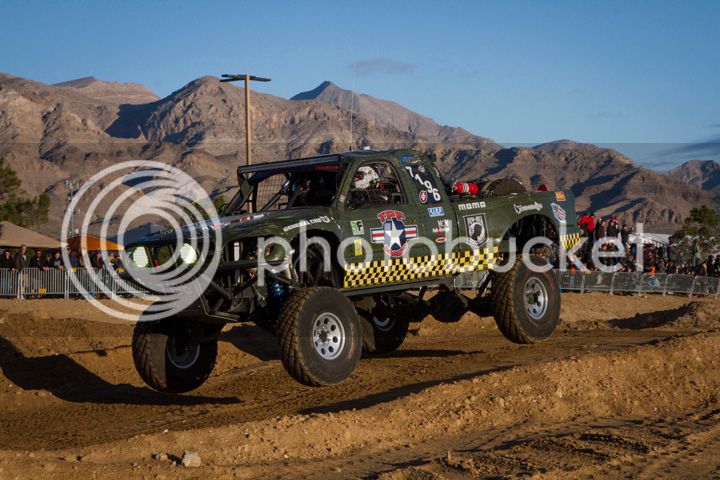 Last year with fewer trucks we were able to get to the front quickly and run our pace from there but we figured it would take us a lot more work this time around. By Pit A we'd gotten around a few trucks and we're roughly third or 4th on the road with the #7112 Xterra out front and a couple of traditional 7S trucks giving chase. The #7112 had some mechanical problems and pulled off at the Quarry but our guys didn't see them. They kept pushing and caught the #7129 truck in Pit B. They left Pit B headed for S/F first on the road with a slim lead over #7129 and #7147 with the #7177 truck not far behind them.

Had a good quick stop in Main Pit for a splash of gas and a quick snack and we were back out on course still 1st on the road. Robbie Cockrell in #7129 and Justin Park in #7147 were close behind. AJ Jones in #7177 was in the mix also with the Top 4 all running within 10 min of each other. Going up the hill towards Joshua Tree highway the #7129 got around us and reclaimed the physical lead for about a mile or two before having to pull off with a mechanical issue of their own their own, ending their day. Rolling in through Pit A we were still out front with the #7147 3 or 4 minutes back and the #7177 just behind them. 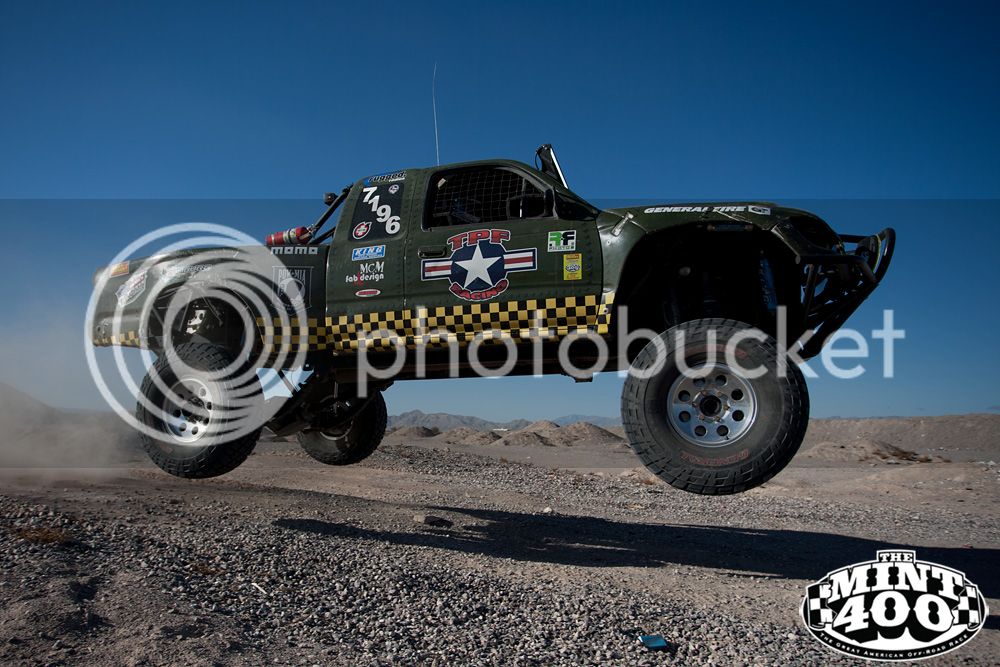 With the lead and a rear start Khris knew that the guys behind him would have to pass him and put time on him so through the rocky stuff he started dialing it back a little and was able to maintain a couple of minutes on the trucks behind him. The truck was working perfectly and for the second year in a row we were having a pretty flawless day. The running order stayed the same all the way through Pit B with the Top 3 trucks still within about 6 minutes of each other. We were feeling pretty good about things but knew that something as simple as a flat tire could change the whole outcome so Khris tried to balance caution with consistency to keep the truck out front. 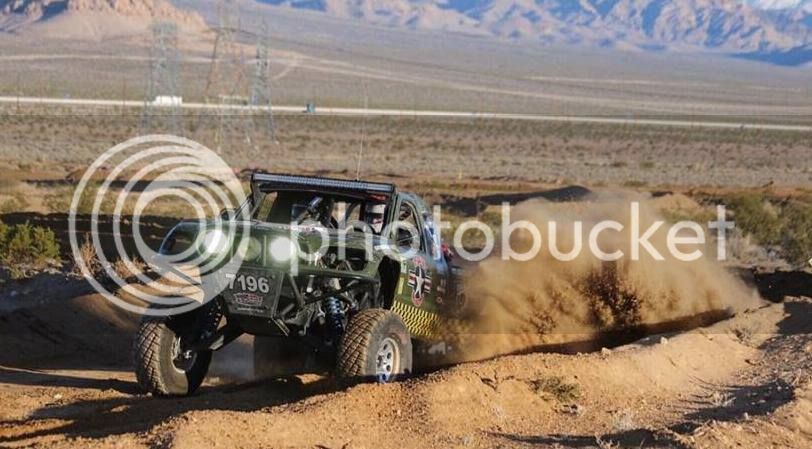 Through the last 30 miles of the race Khris and Keith ran smooth and steady. About 25 miles from the finish the #7147 had an issue and lost about 10 minutes moving the #7177 in to second, roughly 7 minutes back. In the end our gutty little stock motor Tacoma crossed the line line in 4 hours, 55 minutes, roughly 7 minutes ahead of AJ Jones in their 7S Ranger. That was good enough for second overall amongst the 2 lap racers, beaten only by the Voss 8/TT truck.

In 2014 we raced the Mint for the first time and were really excited to be a part of it. It was only our second race ever and we ended up having a short 100 mile day with a broken axle but were glad we got to experience it. Last year we tried it again, just hoping to get our first finish and were pumped to not only finish but win our class with an almost trouble free run (minus a driver error induced flat tire). This year with a larger field and some confidence in our truck we really wanted to shoot for a win. Pulling it off for the second year in a row with a trouble free run on a course that IS pretty rough when you're bouncing around in a stock motor/leaf springer is a testament to the amazing job Khris has done in building and improving our truck. 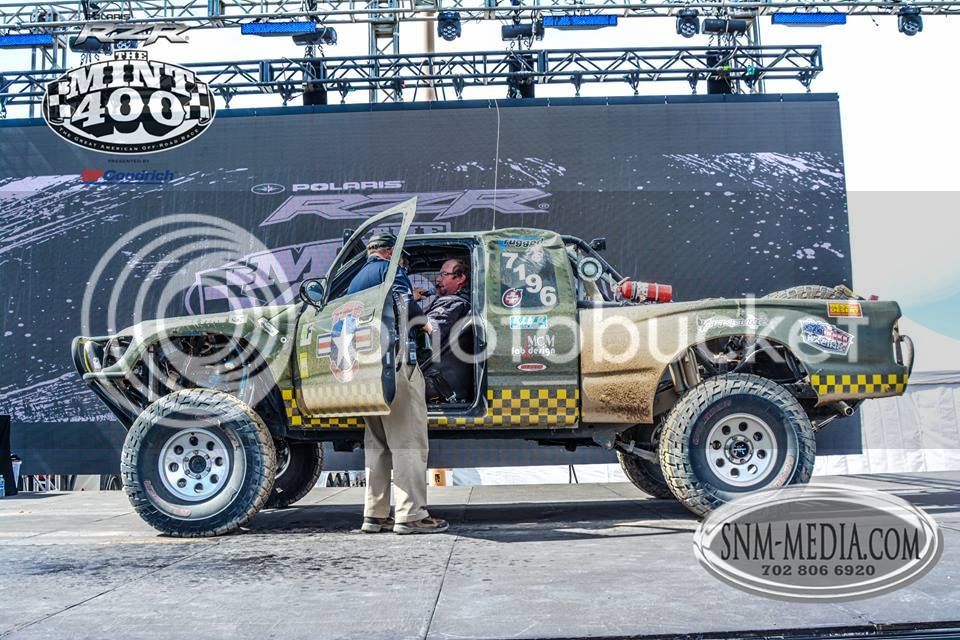 The Mint 400 remains a big deal to us and being able to win our class 2 years in a row really means a lot to everyone involved with our program. We've got friends who've been with us from the start and others who hung our with us for the very first time this year and we appreciate all of them for what they do to help us out. We love not needing their help on race day but we're really glad they're there in case we do!

Huge thanks to Mad Media and BITD for another great event. We're especially appreciative of Matt and Jerry at Camburg for supporting the idea of this class. They have been instrumental in "reviving" 7100 and I strongly believe there are more great things to come from this class. Thanks also to the amazing companies that have helped us out...Serena and everyone at SDHQ, General Tire, Camburg, and our Las Vegas friends like Matt at MCM Fab, Warrior Wraps, and Adams Driveshaft. 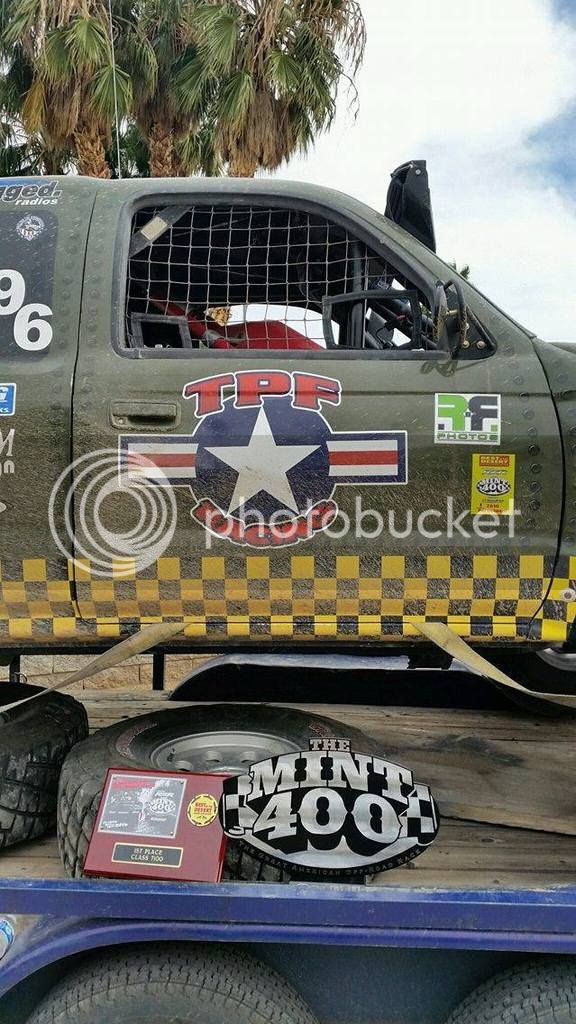 Not sure what our game plan for the rest of the year will look like, might have the truck back out in October or we might let it sit until next year but either way we're 99% sure we'll be lining up again at the 2017 Mint 400 looking to keep the party going!
TaxPayer Funded Racing
http://www.facebook.com/username#!/TPFRacing

You guys killed it! Solid run, congrats on the W!


Sent from the RDC Mobile App. Get it for your IOS device today
Nope, not kiddin'
www.dirtcircusracing.com

Was a well deserved win. These trucks are so close that it is a fine line you need to run, to not break, yet get ahead. You guys definitely have that line figured out. We will be back to race against you guys again. Congratulations!
4000 pounds of "PISSED OFF NISSAN"

Strong work guys, two in a row is impressive.
All I want to hear out of you is “speed zone”, “we’re on fire,” and “I got the fat chick.” Zambo

Congrats on the win! Come race the CODE race (Mexicali to San Feliepe) in Dec. We raced it last year and are going to do it again! It's like "old school baja" as in you have no idea where your truck is but it's fun as hell and the course is marked really well. You have one very nice looking Toyota! Thanks for your 20+ years of service in the Air Force!

firedog said:
Congrats on the win! Come race the CODE race (Mexicali to San Feliepe) in Dec. We raced it last year and are going to do it again! It's like "old school baja" as in you have no idea where your truck is but it's fun as hell and the course is marked really well. You have one very nice looking Toyota! Thanks for your 20+ years of service in the Air Force!
Click to expand...

Appreciate all the polite words from everyone. Regarding CODE, unfortunately we're probably a long ways away from that. I'm not even sure what class we'd be legal in as I don't think our truck would meet 7S/7SX ish rules with the long travel, etc. There is a small chance that we might try to get it out for the BITD Parhump race in December but the timing is tricky as I'll be less than 30 days back in the States.
TaxPayer Funded Racing
http://www.facebook.com/username#!/TPFRacing