In 2008 Baldwin Racing took their new Geiser Brothers TT to Laughlin for its maiden run. After a tough weekend there, it was decided that we were going to run Parker and get some more race miles on the truck. The last minute decision to hear there left us with limited accommodations in Parker so we booked the team’s rooms in Havasu. That made for a bit of a drive and an early start to our race-day.

Baldwin Racing Crew Chief, Kevin Pence and I woke up before dawn and with one of our crew members, Mitch, in the back of the big Ford F-550 fuel truck, we headed down the road towards the pit.

As we were winding along the road, I reached for my drink in the cup holder and in the brief moment of misplacing my hand, my right pinky on my right hand momentarily grazed Kevin’s left pinky on his left hand while it was rested innocently in the armrest.

“What the hell are you doing,” said the now wide-a-wake and feisty Cowboy.

“Uhm… huh, what?” I said. Just working to move the heavy mass of truck conscientious of making sure we made it to the TT by the start of the race.

“You just tried to HOLD MY HAND,” Kevin Exclaimed.

“You just tried to hold my hand.”

“That wasn’t your drink, it was my hand. I wasn’t holding your drink. But you just tried to hold my hand didn’t you? What is it with you Californian’s? That’s not going to fly with me.”

This exchange continued the reminder of the drive much to the amusement of Mitch in the back seat.

As we roll up to the semi, it’s time to get serious. The crew and seemingly countless number of volunteers are all gathered around the Trophy Truck as the plan for the day is being finalized and before Kevin and I exit the truck I ask, “Is this put to bed? We’re going racing and it’s time to focus on that now. And besides, I was just reaching for my drink.”

We get out of the truck and join the group around the truck. As now Kevin has arrived things get a little quieter and everyone is prepared to hang on his every word. And he speaks:


With his cowboy hat, Wrangler jeans and cowboy boots, Kevin Pence was the closest thing I’ve met in racing to a true cowboy. And a pretty good authentication of the surly but affable personality of Robert Duval in Days of Thunder.

Kevin was an innovator and a winner who loved off-road. The demise of CORR and Baldwin Racing forced Kevin into an early retirement and he’s spent the last few years on his farm in Argonne, Wisconsin.

Last night Kevin the world and this sport lost a father a husband, a grandfather, one of the great car builders, a champion and one hell of a competitor.

My thoughts are with Holly, Dustin and the Pence and Kincaid Families for their loss.

Heard about this today. Thoughts and Prayers with the Pence family.

I wanted to pay respect to Kevin Pence and his family, by sharing some thoughts and stories. First, a little background for the west-coasters that may be wondering: who is this man, Kevin Pence? Kevin Pence had years of off-road racing experience, was a skilled fabricator, and most recently ran the Baldwin Racing Team from roughly 2000-2008. Kevin grew the team from a single Pro-4 working out of his garage, to multiple short course trucks, trophy trucks, and prerunners, in a race shop outside of Crandon, Wisconsin. He led Jason Baldwin and the team to the 2004 CORR Pro-4 championship, and the 2004 SCORE trophy truck championship.

I remember Kevin Pence as a quiet, strong, honest, hard-working man. One of the traits I admired most about Kevin was that he led by example; if he put in 100%, he damn sure expected you to do the same. Kevin also shared a simple goal: to win races, not by cheating, but by building beautifully crafted, simple, reliable, brutally fast racing trucks. He also had a lot of fun, in the little down time he had at the races!

I had the pleasure to work for Kevin Pence, and with a bunch of talented, hard working guys on the Baldwin Racing team, from November 2004 through December 2005. Here are a few things I remember…

While working for Scott Taylor, I remember meeting Kevin Pence for the first time. You should have seen the smile on his face when he told us about the power and torque numbers of the new Patton “8-stack” injected V-8s they had retrofitted into their Pro-4 trucks.

I remember one hell of a ride in Josh Baldwin’s trophy truck, when we ran a shake down session before a 2005 SCORE race in Mexico.

Kevin could be a stubborn man, but everything he did, he seemed to have a reason for it. He had a good intuition about what would work, whether for short course or desert racing.

I remember the smiles and high-fives when we won the 2005 Chairman’s cup and 2005 BorgWarner cup races in Crandon.

At one “Fall Crandon” event (I am guessing about 2001-2002), Kevin brought a Pro-4 to the track unlike what we had seen before. He and the crew had fashioned lexan windows, side skirts, and air dams, long before we would see bits and pieces like this in the late 2000’s CORR days. Jason Baldwin drove the truck with blistering speed and smashed the track record, which stood for some 8-10 years if I recall correctly. Kevin took a lot of pride in things like this, but you wouldn’t hear him bragging or boasting…

He had horses to feed.

He had trucks to build.

He had snowmobiles to ride. I'll keep searching, but I somewhere have a picture of Kevin in his truck in turn 1 in Crandon, way back in the day, most panels, which were probably metal, missing. I remember it being a cool looking TRUCK back then, not just the normal for back then roll cage mobile.
I'll keep searching.
Advertising supports this site

Found this while searching for Google pics .

(Sept. 19th, 2004 ~ New Berlin, N.Y.)
Jason Baldwin Wins His First Pro-4 Championship!
Jason did exactly what he had to do to win the championship. He was the most consistant points scorer of the season. Out of 14 races, he won 3, finished 2nd five times, and finished 3rd three times. He only finished once out of the top 4 for the whole season! Great finishes combined with zero failures gave him the combination to win his first championship in style - by winning the last round.
Out of the top 6 finishers in the Pro-4 Championship, 5 of them run Weismann transmissions and transfer cases. In total we had 10 wins, 10 seconds, and 10 thirds! Here the program I still have from that race

I just realized something , that's Josh's truck they show in the article . Jason was 66 and Josh 86 . Here's the page I looked at and you can see the truck numbers listed as well as Kevin's name as crew chief Does anybody have a pic of Kevin's Class 6 car?

Crandon did up a nice decal in Kevin's memory

Kevin was mention a bunch of times throughout the wknd . Even being mentioned when Arie had his big wreck , guess Arie's truck was a former Jason Baldwin truck . Unfortunately here's what's left it 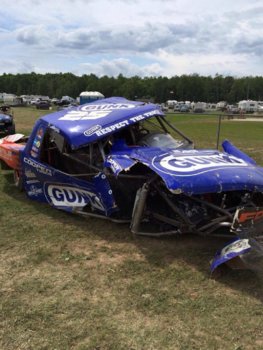 Bummer to hear.
I was fortunate enough to work closely with Baldwin Racing (and you too Patrick, AKA "P-dub") from late 2005 till the demise of CORR. Great bunch of guys. I always worked to the best of my abilities to get them what they needed.
I could always remember calling up Kevin at his home base in Argonne and it seemed that I always caught him while he was out on the tractor.
He was a pretty sharp guy and if you were direct in your conversation, you could learn a lot about short course and desert vehicles. He learned a lot by doing and was good at it.

My thoughts are with the Pence/Kincaide families and former crew members of Baldwin Racing.
www.swayaway.com
Advertising supports this site

Curt LeDuc said:
At Crandon they had stickers that said (cowboy up) that was Kevin's go to phrase when things got tough. In racing things get tough a lot ! I always was racing against Kevin as a driver,builder,team manager and there was always friction,always! But if I needed a part or some favor I could count on him to give me the cocked head look and smile and then we would find what I needed because he only wanted to beat me on the track not in the pits. When I first raced at Riverside he brought a new class 8 Chevy and it was so radical score made him race it in class 2 with his wife riding with him. When we raced Crandon on Sunday nite tearing down we were always broke and hungry so I would call across the street to Copper Country and order a ton of fried chicken and fixings and send it over to Baldwins pit and there would be so much food Kevin would invite my whole team over and we would share our misery or joy over beers and fried chicken. So I say goodby to a dear friend who always tried to outthink me,outwork me and out drive me. You truck jumping,sideways driving,dirt throwing,full throttle into turn one HERO of mine. Curt Leduc