What did you ride?

I had a recent conversation with some friends and relatives about our early days of riding and racing dirt bikes, how we did land rush dead engine starts across open desert to a smoke bomb, and courses were marked with lime and an occasional ribbon. There were some youngsters about, listening to our stories, and they looked at us a bit strangely, like we were from another planet, when we were talking about some of the bikes we rode "back in the day". They knew the big 6, (Yamaha, Suzuki, Honda, Kawasaki, KTM and Husqvarna) When we were talking about some of the bikes that were around back when, they were in disbelief at how many different bikes were around then. So I thought I'd ask, how many dirt bikes did you get to ride "back in the day"? My personal stable of bikes were 1968 Yamaha DT90, (1st bike) 1972 Yamaha DT250, 1973 Yamaha MX250, (my desert racing bike) 1975 Yamaha YZ250, (the flexi) 1978 Yamaha YZ250, (my MX bike) and 1979 Yamaha IT250. Some of my friends and relatives dirt bikes I had the pleasure (and sometimes regret) being able to throw a leg over were: Hodaka Combat Wombat, Bultaco 125 Lobito, Bultaco 250 Sherpa T and S, Bultaco 250 Pursang, Montessa 250, Ossa 250, Maico 501, Honda 125 Elsinore, Sachs 125, Penton 125, CZ 125 and 250, and of course the very 1st bike I ever rode and crashed through our neighbors fence, 1965 Vespa 90 step through. I was hoping to see a fair turnout of vintage bikes at the Mint, but entries are looking a little slim.
BITD, SNORE Race Volunteer.
"If you're an eternal pessimist....you're never disapointed!"
?

In my pre-teen years, I raced a stock Hodaka SuperRat. In my early to mid-20's, I raced Enduros on a highly modified 1980 Yamaha IT-490.
On the IT-490, we welded up the exhaust ports to change exhaust timing and increase compression, ported & polished the ports, reduced cylinder head combustion chamber volume, added heavier clutch springs and spent a tremendous amount of time on carburetor tuning resulting in complete different needle jet, main jet and pilot jet from the factory setup. The end result was about 25% increase in max power, plus a 2-stroke which chugged like a 4-stroke at low RPMs. It was necessary to run 107 octane fuel to prevent detonation. All the factory suspension was way soft, plus the factory rear shock suffered serious fade issues by the end of the enduro. So, I modified the suspension with different fork tubes & springs along with an aftermarket rear shock & spring. I had a collection of front and rear springs before I settled on what I eventually raced with for 4-years.
Advertising supports this site

Started on a Honda 50 1960's something like that with fold down handle bars. That bike was a beast. Would always run no matter how much abuse. I layed that thing down in the middle of a creek almost completely under water. My dad came to the rescue and picked the bike up took it to the other side and kicked it over and I swear just a couple of kicks and it was running. Had a 1968 or 69 Husky two stroke that kicked but on the track but I swear had only 2 or 3 inches of travel. Some Honda's throughout the 70's and 80's. I was working at a Suzuki dealer and each year we had the Dealers challenge where all the dealers would meet and you had to show a W2 from the dealer in order to race. No Ringers allowed. One catch was you had to ride the current year bikes for sale. They had me ride a 1992 Suzuki DRS-350 and that thing must have weighed 300 lbs. It was the street version on a Motocross track. It sure felt like 300 lbs as it bottomed out on almost every jump. Killed my back riding that thing. Onto a CR in the mid 90's and then back down to just riding desert and trails, and moved to a 2000 XR400. Now riding a 2014 CRF450X and love it. No more official racing but if you challenge me in the San Felipe area, you bet I will pin that 450X. I'm old but not that old.
Scott

I grew up on motorcycles.... 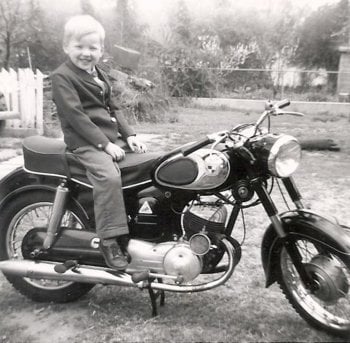 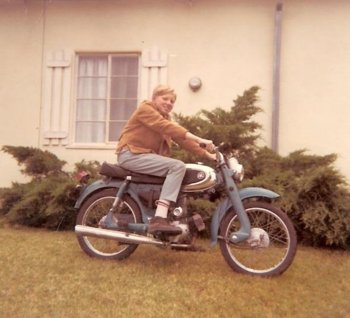 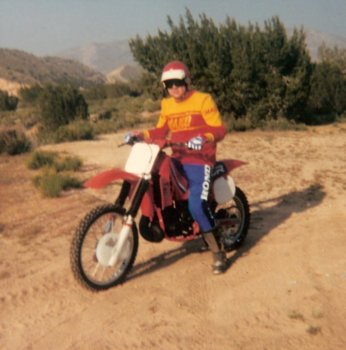 I started riding in 1982 on a Honda 50. Then moved to a Yamaha Enduro 100 and then 175. We moved to Bolivia South America and motorcycles were our main transportation for many years. I have many many miles on a 1972 Honda XL 250, 85 XL 250, and 87 XL 600. We also had a Yamaha Enduro 250 and Hodaka 100cc in those days too. My first MX race was on a borrowed 91 Suzuki RM 250 in Bolivia. I sucked, but had a blast. My first bike when I left home was an early 80s left side kickstart CR 480. It took some getting used to starting with my left leg and the engine was way too fast for the brakes! I moved to AZ in 97 and bought a brand new leftover 95 XR 600 that I made street legal and rode to work for a couple of years. I also flogged it around Speedworld and Canyon raceway, even raced that beast. I even did the 4stroke stadium race in Bank One Ball park on that pig. I almost made the main event! I did a 628 kit, ported head, full FMF exhaust and had the suspension done by Race Tech. It was a fast, but heavy bike. I started racing desert on a 98 YZ 400. Then moved to the XR 650 for Baja and the YZ for Whiplash races. My last couple of years racing Baja I had two XR 650s, one practice/pre-run bike and a race bike that were both provided by a sponsor that I got to prep to my liking. I also picked up a 93 KX 500 in '05 that I raced a couple of times and pre-ran Baja on. It raced a number of Baja races in the 90's. I still have it and a XR 250 that I put around the ranch in Texas on.

I've raced MX, WORCS, National H&H, Whiplash, all the SCORE Baja races, Adelanto GP (one of my favorites), and a couple of D37 at Lucerne. I never raced a BITD event on a bike. My bucket list race is NORRA, but I think I will pay Baja Bound Moto to set me up with a bike and support for that. I have great memories from my bike racing days.
Last edited: Feb 24, 2019
Advertising supports this site

BSA, Greeves, Zundapp, Cotton, Bridgestone were among the lost brands I got to ride but never owned. Norton and Matchless also made for some big desert sleds.
Hey! You kids!! Get OFF my driveway!!! If you can't go away happy, just go away!

When I was 12 my dad got me a Honda TRX125. Man I loved that machine. We weren’t in very good shape with money at the time but my dad got me the quad anyways. Rode it every day. Even when it had 4 flat tires and we didn’t have money to fix them I still rode it.

From there moved up to a 4x4 Suzuki atv, then a Yamaha banshee...all while playing Ivan Stewart’s off road at the local mall.

These days I have run the Baja 1000 2 years on an ATV. And race my trophylite truck at BITD events. Man, I love this stuff. Off road for life.
Trophylite #6013
wildpowersports.com
STEEL-IT Dealer This pic out of my High School Year Book, is of our High School Motocross Team. Yes, "High School." I grew up in Riverside where in addition to stick & ball sport teams, high schools had Motocross Teams which competed Saturday nights at Corona Raceway. Note how many female riders were on the team. Some of you will recognize a few of the riders in this pic as well known persons in the Off-Road industry today. While in High School, several of these riders also raced at the L.A. Colosseum when Stadium Motocross was in its infancy. Best bike memory beside all the friends, were all the NO on S21/11 shirts at the B.H./Barstow and 29 Palms congressional hearings. One of the saddest was when they took the land years later that so many, fought so hard to keep...
Advertising supports this site

Best bike memory beside all the friends, were all the NO on S21/11 shirts at the B.H./Barstow and 29 Palms congressional hearings. One of the saddest was when they took the land years later that so many, fought so hard to keep...
Click to expand...

I, too, was in the desert Foxes MC
VCPs, love 'em or hate 'em, you can blame me for 'em Some other bikes in our stable that I rode include a TT500, couple of ATC's and various other bikes when conditions warranted borrowing a bike
Kevin Martin * 2005 B1K Finisher * BALD EAGLE RACING * BITD #1197 / MORE/SNORE #1297

I started late in the game. Didn't start riding till I was almost 30, in '90. But I started on an old Husky 430 2 stroke single cylinder air cooled, twin shock. Learned to ride the trail down in Baja. That's where my love affair for Baja and off road racing started. Sold that bike and picked up Danny LaPorte's old Husky motocross race bike. 400 water cooled 2 stroke before they officially came out with a water cooled version, sitting in a 250 frame with a extended swingarm and dual Ohlins shocks.
A Hearse doesn't come with a luggage rack!

Learned on a Honda cub- 50cc step through.
My first real motorcycle was a 71 CT1 175 Yamaha. 21" front wheel, Curnutt shocks, Preston Petty plastics, loud as hell expansion chamber, home made silencers from aerosol cans and steel wool...etc
Used to take the lights off on the weekends and blast around Indian Dunes.
Sunday night reinstall to ride to school on Monday.

Craziest place we rode was at Imperial Hwy and Vermont. Now what is the L.A. Southwest College.
Occasionally got sketchy with some of the locals round there if you know what I mean.