what happened to the DA?

Werent they supposed to finish 1-2-3 in like 4 classes? I give them props on turning the playtech car into a trophy truck last minute, even though it may not have been the prettiest thing.

On another note, great racing out there. The mendeola single seater suffered some major problems on friday and saturday but was able to overcome them on sunday for the win in class 10. Great job by the mendeola crew overcoming that.

It is amazing the amount of smack talk before the races, but after.......chirp....chirp...chirp! It always makes for some pre race comedy. Congrats to Harold. He was giving Rob Mac a run before we broke. Anyone who kept their car together for the weekend should be stoked!
KREGER FABRICATION INC. Passion, performance, perfection

Derek, What happened to Brendan? Looked to be running pretty decent with only 2 races on the car. Any improvements to the motor/trans? Just wondering.
All I want to hear out of you is “speed zone”, “we’re on fire,” and “I got the fat chick.” Zambo

I have to give PAB and the DA an A+ for decorating the buggie with the TT glass and making the race!

It wasn't pretty, but it was pretty awesome!
Smoother is Faster

Rory said:
Derek, What happened to Brendan? Looked to be running pretty decent with only 2 races on the car. Any improvements to the motor/trans? Just wondering.
Click to expand...

We are just teething the new Xtrac. We knew what parts were an issue for the weekend but we rolled the dice anyway. Three times having the diff out. covered in gear oil, C.V grease and dust=not a good time. New parts are in the works so watch out in san felipe. He passed 12 cars on sat in the first lap. He is very excited to be back in the dirt so we will keep plugging away. R/D is never fun!
KREGER FABRICATION INC. Passion, performance, perfection

Ive seen a couple pictures of Pabs truck at Laughlin.
And had to take a double look....
A playtex?
I have no audio on my computer.
Did i miss something?

Can someone post pictures of the "not so pretty" Trophy Truck here? I am curious now...

Our press document since some have asked........PAB


Something stunk in Laughlin......oh, it's just the Desert Assassins


With 11 entries coming out of the Desert Assassins Laughlin compound
expectations were off the charts going into this past weekends SCORE Laughlin
Desert Challenge.

Before we get to the carnage we must also say there were some bright
points for the team as well. The Unbound Energy 7sx truck of Heidi
Steele and Chris Vano was able to start the season with a 4th place
finish. Heidi and Chris will be charging towards the championship and
the finish line of the Baja 1000 in Cabo San Lucas this November. "We
had a spring problem but were able to push past it and know exactly
what to do for the next race in San Felipe, thank GOD for the adjustable FOX
Shox as they made it so we could control the rear of the truck" said
Vano. "The guys at Camburg have the front working so good that we just
need to make some moderate changes to the rear so they are compatible"
continued Chris.

The top finish for the team was The Lake Elsinore Casino SCORE Lite car
of Cameron Steele who was able to win the Sunday race and take second
place on the weekend. "Second is the first loser" said Steele "we had a
carburator issue and then broke a hub on Sunday". The winner of the '06
event was for sure not happy as the bridesmaid.

Racing his 3rd race as extended DA family was Aaron Hawley.
Affectionately known as 'Poptart', Aaron was a mere 13 seconds out of
the win on day one and made a battle of it and left Laughlin with a top
three result.

That's where the good news basically ends for the team.......with one
last ray of sunshine. The Orange County Pools/Lake Elsinore Casino
Playtech built class one car Cameron and Darren were scheduled to drive
went through a metamorphosis and became the Playtech built Unbound
Energy Trophy Truck. Yeah things got a little weird in Laughlin and
the team is still looking for the spaceship.

"Clyde was testing the truck on Friday late and we popped a motor" said
Steele of long time partner Clyde Stout and the #16 Unbound Energy
Trophy Truck. "We are nearly done with the first of our new trucks and
all the motors we have are for them as this was to be the last race for
the current truck so we don't have the spare motor anymore" said Stout.

Mike Brunning of Orange County pools said just put the body on the
Playtech 1 car?!!? Yeah we all did a double take when the 2 x 4s came
out to line the doors up on the buggy!

"I was shocked how well the Playtech car worked" said Steele who drove a
bit conservatively to a 14th place finish after starting dead last of 31
trucks on Saturday. "This thing is sweet but since it's not ours I
didn't want to smash it too hard" was Steele's reaction. "We passed 8 or so
trucks and were running clean when we decided to take it down a notch"
said team mechanic and navigator Bryant Layton. Although they had to
pull the Playtech from class1 for Trophy Truck the time they had in
their semi conservative run would have been good enough for 6th on day
one of class 1.

In the end the gremlins would come back after a great first lap battle
that saw the boy's coast around the pit corner ahead of the Robby
Gordon Motorsports truck they started next to. A broken axle looked like doom
but the crew was able to change it in 10 minutes only to have the other
side break near the Laughlin Leap 1/4 mile later.

DA kingpins Darren Hardesty and Brian Burgess took the brunt of the bad
luck as both class champions from 2006 were struck with huge problems.
Darren was pushing day one in his ORW class 10 car, which he won in last year, when
the motor blew. "We took some risk as we know this is short race and it
caught us today" said Hardesty. Day two saw their motor that won
the Baja 1000 go in and Darren's partner Mark Randazzo was able to earn
a top three on the day.

Brian "Cheater" Burgess needs to avoid the black cats as he had the
worst weekend of the bunch. Fridays practice saw his one off transmission
lose a part but the Folts boys were there and it was good to go for race
day. Half a mile in the 1600 champ now racing SCORE Lite exploded a motor. "I
was revving it pretty hard and I just killed it" said Brian. He then
had a spare brought up from So. Cal. only to have it catch fire one mile
into day two.

Kash Vessels who is a league MVD (Most Valuable Driver) for sure was on
hand to do some driving in the team's two class 10 entries and never
got to come in off the bench."I can't believe such a great driver never had
a chance to wax some fools because we couldn't get away from the black
cloud that was hovering over us" said Steele. Kash in his "cruise" no worries style just shrugged it off when he said "that's desert racing!"

Next up for the team Cameron will be hiding from the Laughlin beating
in Aspen all next week working for ABC and ESPN on the Winter X Games. The
team will drop back and punt, "we plan to have the whole team in San
Felipe in early March for race two of the series, including both the
#16 and #13 Trophy Trucks" said Stout

You can see all the interviews and coverage of the Laughlin Desert
Challenge that Cameron hosted at www.digital1unlimited.tv

You can also catch part of the team at the SNORE Battle at Primm event in Feb.

Ya...I think "not so pretty" is a decent description. But I also have to say "I'd drive it"

Think and say what you want to about the entire DA Crew, but these folks have returned the Fun to this sport which gets entirely too serious from time to time, at least for myself. 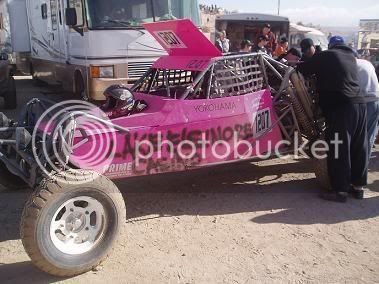 This one has got to be the best!
INLANDNEWS/INLAND WEST VIDEO
"WE DO NOT SLOW DOWN JUST BECAUSE IT'S DUSTY" -The Pistola

Had a blast acting like a union worker... "watching" Jason and Kirk help your crew mount the body on the class 1. Thanks for the pizza and ketal one! The DA crew is where you want to go for a great time!
Vano is a great driver in the Dually...I am still alive ... lol
Jerry@camburg.com www.camburg.com

Great job getting the body on the Playtech car.