What Happened with Acer

Haven't seen any off road related posts about Acer. Where did you go or what is he doing now?

He posted on FB a few times. He's been down in San Felipe.

He’s prorbably doing the same thing, but without telling anyone. It’s like cannibalism around here with so many people ’s eagernesss to try and bash him.

How dare someone have fun in this hobby we take seriously.... shame shame shame
See you in the dirt!

mattb said:
He’s prorbably doing the same thing, but without telling anyone. It’s like cannibalism around here with so many people ’s eagernesss to try and bash him.
Click to expand...

mattb said:
He’s prorbably doing the same thing, but without telling anyone. It’s like cannibalism around here with so many people ’s eagernesss to try and bash him.
Click to expand...

Totally agree! With so much animosity towards his Character & choice of garb; instead of embracing his passion his humanitarian efforts working with schools, with UNICEF! Unicef people an organization trying to help children who are going through atrocities, promoting MARVEL and people tried to destroy him. He did want to make the sport better but dis not say how ,maybe till he had something concrete it does not happen over night. Offroad is a big family & shod have been more inviting. It's possible he could have brought other drivers to crossover. People forget their is a human with feelings underneath the helmet. So do we blame him for being quiet when he does things now. High profile, $$ the few times I saw him never saw bodyguards great prospect for a kidnapping ,he can get away and dump the get up and blend with the crowd too just my lodgic.never understood how it affected those that bashed him personally.

His last post on Facebook looked like he had a new pre runner or put a windshield in the trophy truck. I believe he was in San Felipe giving kids rides in the truck.
California Insurance broker for commercial, home, and auto insurance.

He was in san felipe last weekend watching the local race they had down there, I spoke with him a little bit, he’s focused on his pavement-racing but he’s around specially helping schools in Baja , he said he will race eventually but not with score.

He had one of his trophy-trucks made into a prerunner down there.
The truck was beautiful, he sealed the cabin putting windshield and windows like a regular prerunner except still is his trophytruck. Electric windows controlled wirelessly to get in. Leather dashboard. Wifi, a/c and even two coolers inside the rear fenders for, his words, “share a cold drink with the people of Baja whenever he can”

Say whatever you want of him, but he’s really cool and the things he’s doing in Baja for the kids are awesome.

Did anybody ever figure out who he really is?

Goober said:
Did anybody ever figure out who he really is?
Click to expand...

i think his real name is irrelevant....what is relevant are his actions, thats his true face....my devaluated .02 cents

Maybe the drought affected his ability to wear the helmet all the time...
"Get your Ranger off my neck....!!!!!"​

Met him in San Felipe last week during breakfast on the Malecon. Extremely nice guy. He was taking pictures with some fans before the start of the second race. Said he has been in Italy. We were celebrating my wife's birthday and he remembered to wish her a happy birthday again before he left. Class act. His trophy/prerunner is beautiful.
Brian Craft
BGC Productions

So I have a question? I will preface with that I am not trying to be a smart azz, but how does he eat in public with the helmet on?

Look, I think what he does is awesome for the people of Baja. There are also many others that do awesome things for the people in Baja and I consider myself fortunate to have been involved in just a small bit of charity work down there. But I personally don't understand why he goes about it the way he does. But once again, I am not knocking the great things he has done.

Acer =admiration = who cares who is underneath wether people think they know who it is. Actions speak enough for his character. I would love to be in his position and do everything he does. I am glad to see good comentes for once and if ever given the chance I would apologize and tell him I am embarrassed by how he was treated ,but that is just me. It is what it is and some people you can't change they are too miserable to see good in others.

He spoke of nothing but kindness after this pic.
2015 Baja-500 Contingency xrbaja said:
He spoke of nothing but kindness after this pic.
2015 Baja-500 Contingency
View attachment 188878

He had to speak a “liiiitle” louder.

I'm sure he's planning something awsome for BAJA!!
J

E. Araiza said:
“share a cold drink with the people of Baja whenever he can”
Click to expand...

I'm the dog on the right. 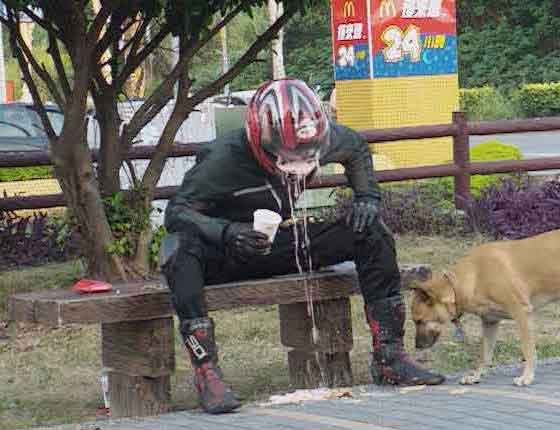