Who is your favorite short course driver and why?

Lot's of good driver out there with great stories! Let's here em!

Mine right now is RJ Anderson since he is leading the new school of off-road racers!
Buy the ticket, take the ride.
Hunter S. Thompson

Man it would be tough to pick just one! Rob Mac is the guy I am usually rooting for because I like his style on and off the track. He will drive anything with wheels on it and doesn't have a private jet or own a casino. He is the guy I think of when I hear the term "professional off-road racer". In fact other than RG he is the ONLY guy I think that term applies to!

In Pro Lite I like Sheldon Creed, he might not be in a Pro2 but I would argue that HE is the guy leading the new school of off-road racers. Nothing seems to rattle the kid.

In Pro4 I like Kyle LeDuc. Maybe a cop-out choice since he has been winning everything lately but when he is on his game I feel like he is the fastest short course racer on the planet. He makes some amazing passes plus he is a LeDuc!

Robby Woods, Corry Weller, and Marty Hart are people I like to root for too. I used to not care for Woods, I thought that he was a squirrel who wadded up his truck ever race. He always comes back though and has done more with less and is a really nice guy who tells it like it is. Corry Weller... well there are a lot of reasons to like her! I think that it is cool that she moved up from the UTV ranks straight in to the fastest class in short course. And Marty Hart is such a hard working, down to earth guy- not unlike Robby Woods in that respect, he has just been doing it longer. Plus he has that awesome mustache.

Carl Renezeder and Brian Deegan are fun to root against. They are both super talented and nice guys off the track but they make good villains on the track.

Johnny Greaves. Self made. Self built. Dude still tears down his own awning!
www.daileyengineering.com
www.hondaoff-road.com

The Wildmam Adrian Cenni the guy might be out of his mind. First race in person was prim and the Wildman busted the crazy wall ride never lifting. I became an instant fan. The 360 jump was sick! He is always fun to watch on the track.
"If off-road racing is outlawed only outlaws will race off-road."

Since Robby Gordon doesn't do a lot of traditional short course I don't really have a favorite . Most of the time I root for the brand of truck ........ FORD !!!!!!!
I've got walls full of autographs and pics , Scott Douglas , Rob Mac , Rick Huseman , Ross Hoek , Dan Baudoux , and Steve Barlow to name a few .
Here's a pic of just 1 wall The other 3 walls are just the same with pics and stuff lol .

I find myself rooting for Bryce Menzies, he's put in the work and is a solid driver.
www.armin-schwarz.com/en/
S

Marty Hart. Only because I remember reading about him racing in 3Wheeler magazine when I was a kid! And the 'stache certainly helps!

All time favorite is rick, he was always exciting to watch! These days i root for Renezeder. 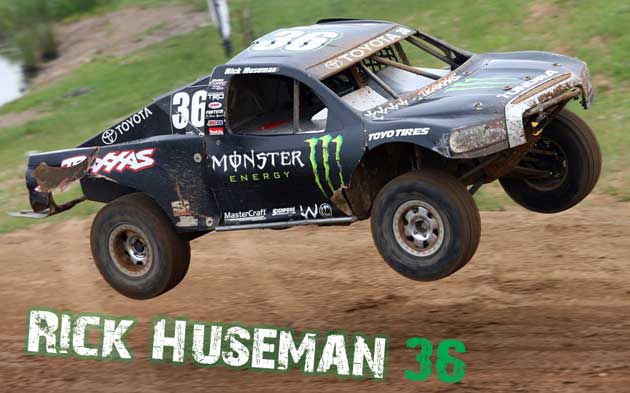 Disturbing the comfortable. Comforting the disturbed.

Also MacCachren and Renezeder are always re inventing themselves. They probably have more total wins between the two of them with all the drivers combined at LOORRS.

New School Drivers- Sheldon Creed has everyone covered in the Prolite class at LOORRS, TORC and SST hands down.

down
If you read it on the Internet it must be a true story !

At first I couldn't stand seeing Deegan in a truck. Now I find myself rooting for him every race in both his classes. I've noticed the amount of himself he's put into this sport, and he has worked for what he has achieved. In P4, I've always been a Kyle LeDuc fan, but I'm not digging his ego right now. Todd is way more down to earth.

Out east, the Greaves family is my team.
Dirt Bike Rider

Yeah I got to say Todd leDuc is just a class act nice guy. I like Robby woods for his blue collar work ethic and he wears his heart on his sleeve.


Sent from the RDC Mobile App. Get it for your IOS device today
AMERICA BLESS GOD!
W

I don't have a lot in person interactions with drivers on the LOORRS side but in TORC, it would be tough to find a nicer guy than Scott Douglas. Always willing to talk to the fans. Last fall at Crandon after my daughter saw Scott in the grandstands he asked him to sign her grandstand pass which he gladly did. About 20 minutes later when Scott got up to leave he walked over to us and asked my daughter for her autograph. She signed his credentials and talked about it for weeks. Just a class guy. Other good guys in TORC include Jeff and Keegan Kincaid and Chad Hord. Johnny and CJ Greaves are good guys as well but I have to admit it was easier to cheer for them when Menzies was in TORC and there was more competition. Nick Baumgartner...can't help but laugh when you are around this goofball. From a pure race standpoint, the Johnny G and RJ Pro 4 battles in past years were incredible...and I was pulling for Johnny...hope that level of competition returns.

Any of the drivers in stock mini...