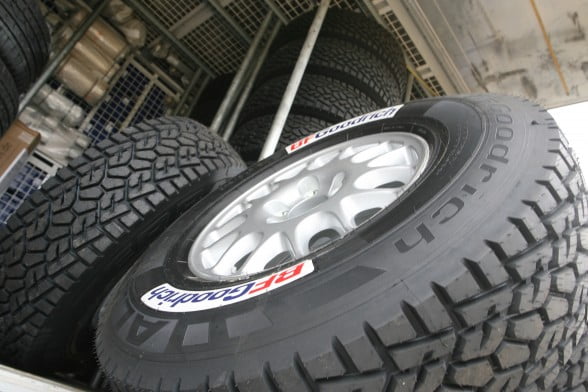 The American tyre brand BFGoodrich secured its 12th Dakar triumph – its 10th in a row – in Lima, Peru, today. Victory on the world’s most gruelling cross-country rally went to Frenchman Stéphane Peterhansel (ALL 4 Racing MINI) who took his personal score on the event to 10 wins.

BFGoodrich’s maiden Dakar success dates back to 1999,and the American tyre brand, which belongs to the Michelin group, hasn’t been beaten on the world’s most exacting off-road rally since 2002.

The 2012 event proved particularly challenging thanks to a menu of more than 4,000 kilometresof against-the-clock action between the New Year’s Day start in Mar del Plata, Argentina, and the finish in Lima, Peru. The route featured a punishing cocktail of rough and rocky trails, plus Chile’s sandy Atacama desert and the awesome dunes of southern Peru which competitors discovered for the first time this year.

The Dakar regulations dictate the use of a single type of tyre for the entire route. BFGoodrich’s principal partners in the T1class (MINI, Toyota, Mitsubishi, etc.) chose the All-Terrain+ tyre which is reputed for its durability, versatility and performance.

The American brand faced stiff competition this year, notably in the form of the Hummers driven by last year’s winner Al-Attiyah and the USA’s Gordon. These powerful machines were entered in the so-called ‘Open’ class which permits the use of wider and bigger-diameter tyres (+13cm), as well as a system that permits tyres to be inflated and deflated from the cockpit. This solution is especially useful when crossing terrain which alternates between stones and sand dunes.

That, however, didn’t prevent the ALL4 Racing MINIs and their BFGoodrich All-Terrain+ tyres from claiming a one-two finish thanks to Stéphane Peterhansel and Spaniard Nani Roma, while South Africa’s Giniel de Villiers and his new Toyota Hilux made it an all-BFGoodrich podium.

Today’s result sees Stéphane Peterhansel establish a new record for the highest number of Dakar wins, and the Frenchman only suffered from loss in tyre pressure four times during the entire two-week competition which was run at an extremely quick pace from start to finish. “Most of these punctures were due to bad luck, including one where a sharp branch pierced a hole in the sidewall, while another was caused when the rear tyre was hit by a big rock that was dug up by a front wheel. I was very happy with my BFGoodrich tyres. The team’s engineers worked hard on the chassis, suspensions and tyres this year to make sure that the three functioned in perfect harmony. I would like to thank my co-driver Jean-Paul Cottret, everyone in the X-raid team and all my partners. They all deserved this win!”

F
RDC
What was the size of BFG tires used in Dakar and kindly inform if these rally tires are for sale?
245 x 80 16 ,only europe , I have tried to get them in the usa ,BFG do not seem interested in selling the in north america , which is a shame because It would save me from paying shipping from france .