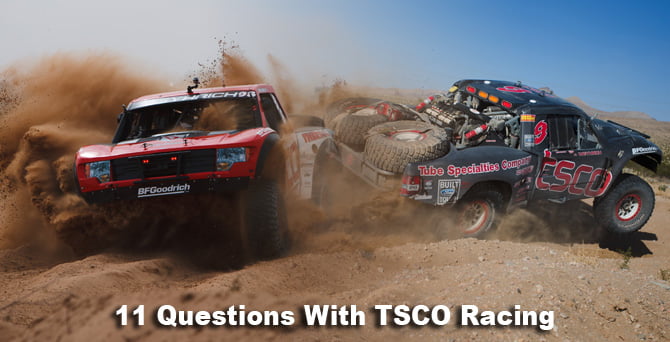 Gary and Mark Weyhrich have been involved in offroad racing for many years and have been synonymous with consistency and a hard working team. Each race they are in they’re always in the hunt for the win, and going into this years Baja 1000 is no different. We were able to sit down with both brothers and grill them on a few topics.

1. When race day comes around do you guys try to work as a team or is it every man for himself and may the best driver win?

Mark Weyhrich – We are there to win as a team. Each truck starts the day with orders to win the race. But, as the race develops we will do what we can to help the lead truck get to the front.

Gary Weyhrich – We always work as a team but at the same time we are both trying to win the event. A good example is the Mint 400 where we both were racing hard for the win against one another. It is fun to race hard against your brother in that situation. We have also had unfortunate situations in races and have stopped to help each other out.

2. If you were Casey Folks or Roger Norman what is one thing you would do to help offroad racing grow as a sport?

MW – Growth is a tricky thing and both of these guys are working hard at it. I agree that Trophy Trucks/Trick Trucks need to lead the way. But, we need to mindful of where this sport came from and always make sure there are a multitude of classes that provide entry points for anyone who wants to show up. There will never be 50-60 corporate sponsored Unlimited Trucks running one series, for a variety of reasons. That said, I would make sure I was taking care of the hobbyists while welcoming the corporate guys with open arms. I would also open up 100% of satellite data, both real time and post-race for everyone to see. I would get really good at displaying this, then transition into live televised race coverage. Yes, I said it. I truly believe this is possible with today’s technology, an open mind and a small kick ass organizing team that knows how to use the tools they have at their disposal. Are you listening Mad Media, because you are just they guys to do it. 3. Describe your brothers driving style, and is it anything like his real personality?

MW – Gary is very quiet and calculating. I see him drive this same way. He is never too outwardly emotional, but inside he wants nothing more than to kick ass and he is constantly figuring out how to beat you.

GW – I would say that Mark has a very confident personality. He doesn’t let anything get in his way and will never give up. He drives that way and is smart behind the wheel. He also knows when to put the pedal to the medal or just lay back and let the race come to him.

4. Do either of you have a pre-race ritual or any kind of superstitions before a race?

GW – I wouldn’t say it’s a ritual but to compound nerves I just tell myself to relax and have fun. 5. If you could have one super hero power what would it be and why?

MW – Power to see the future, because unlike my brother, I never win at the Sports Book!

GW – Never liked super hereoes, I grew up in the Looney Tunes era. Bugs Bunny was the best.

6. What is your best racing moment so far in your career both as a team and individually?

MW – Getting 2nd place in the Baja 2000. We were in a Cheonwth with a SCAT V4 and finished behind the Herbst Truggy.

GW – We’ve won our fair share of races, but individually the most proud I’ve been was at the finish of the Baja 2000. We had around fourteen people with six getting in the car. We had no GPS and limited prerunning. This was back when the Herbst truggy was almost unbeatable. We gave them a run for the money and ended up in second place, but we were the first true buggy to the finish line. For our team it was the Parker 400 which occurred just a few weeks after opening our own race shop. The amount of work the guys had to do to open a shop and prep two trophy trucks was phenomenal. In the background a lot of people were saying it couldn’t be done but we made it happen. Mark finished a close 2nd and I finished 7th. Again not a win but a very proud moment. As for winning a race it was the overall Vegas to Reno we won with our class 1500 car. It was fun to win it splitting the driving with my brother and having my Dad there was awesome. My Dad raced in the first Frontier 500 and it has always been his favorite race. 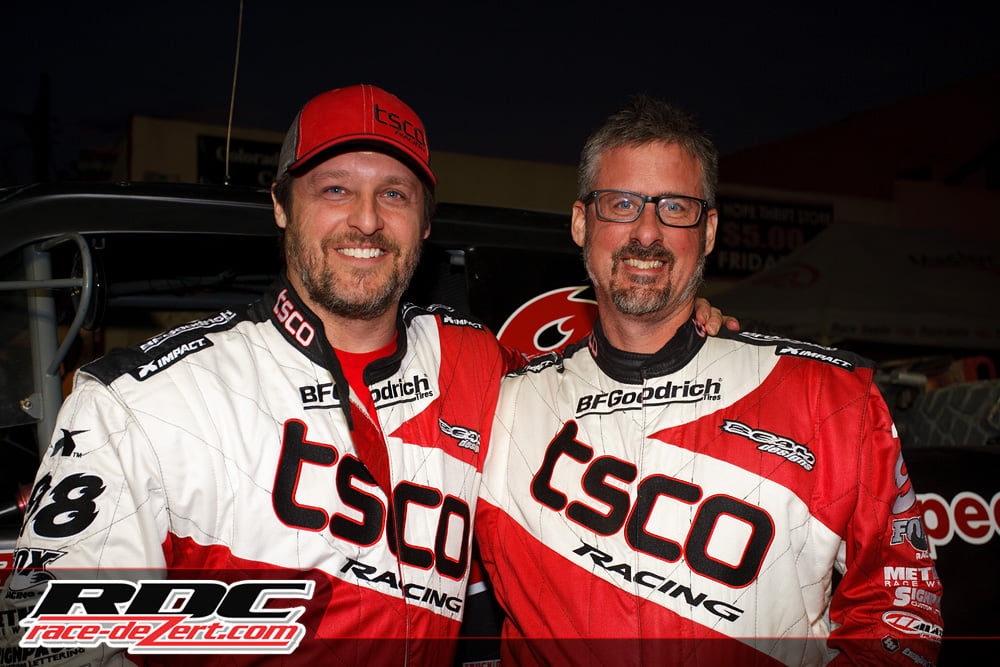 7. What other forms of racing are you guys involved in, or would want to be in the future?

MW – I have been involved in Formula racing, but not since the mid-1990’s. I have thought about the Ferrari Challenge or Lamborghini Super Trofeo series. They both look like a blast and both would be a lot less expensive than Trophy Trucks! But, honestly I would miss the adventure.

GW – In the nineties I took some time off from the desert and did SCCA racing for awhile. Ended up racing the Formula Ford 2000 National Championship which was a ton of fun. I got to race some really cool tracks and at the same time see a lot of the country.

8. Since you guys have both been racing offroad for a while, what are the biggest improvements you’ve seen come across the industry to make vehicles both faster and safer? What will we see going forward that will take things to the next level?

MW – Head and Neck restraints along with seat technology have been the biggest improvements. Gary, myself and our dad have all broken our backs racing off-road. It seems to me those types of injuries have declined.

GW – Just the overall improvements of all the parts on the trophy trucks has made them very reliable. Especially the transmissions, they used to be the weak link but the advancements in them lets us run hard all day. It still amazes me how hard we run these trucks and how reliable they have become. The head and neck restraint has been the biggest safety improvement to come along in a long time. They not only keep you safe but also help you to stay fresh in the truck. 9. TSCO Racing is known for being very family orientated, do you guys want to see your kids get into the sport and continue the TSCO Racing name?

MW – I would love for the kids to get into it! The hardest part is that we are so far away from where the racing takes place. Combine that with the hectic schedules kids have today and it is very difficult to make happen.

GW – My kids have shown some interest in off road racing, but it is difficult to involve them much because of our geographic location in Oregon. It would be fun to see a third generation Weyhrich out there but only time will tell. 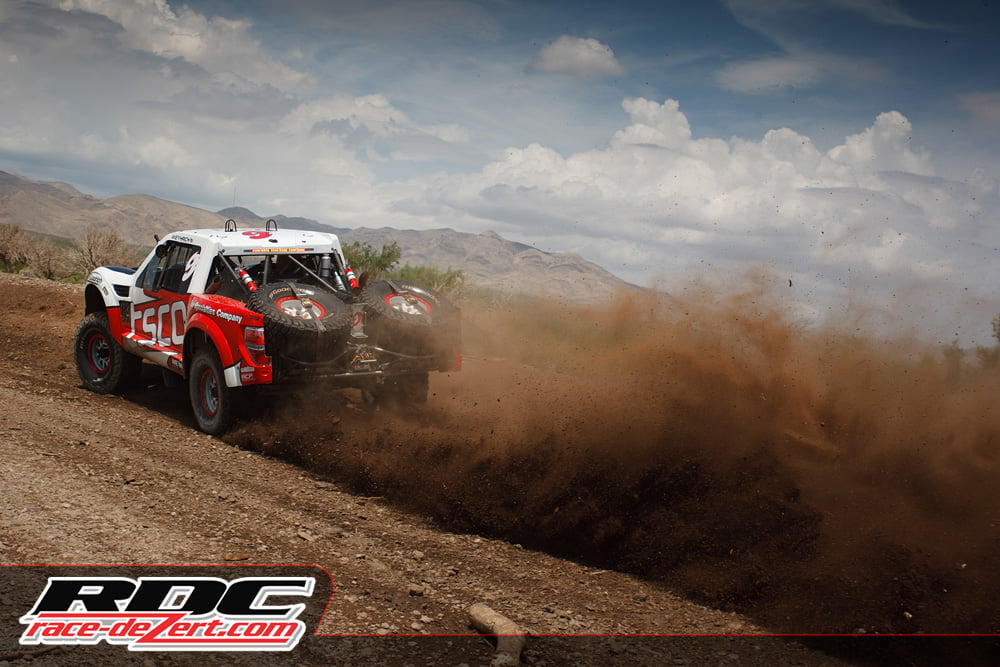 10. Who do you think are the top 3 fastest drivers in offroad both past and present (for fairness you can’t say yourself or your brother)?

MW – Fast? That is hard to say. There are a lot of guys out there that could drive faster, but they don’t because they know how to save equipment. I prefer to look at who is a quick, solid competitor who is good at taking care of equipment. Given those parameters, I would say: Larry Ragland, Rob MacCachren, Andy McMillin.

GW – Myself, Robby Gordon And Rob Mac are all around the same age and we all got started around the same time. I’ve raced against these guys for over 25 years. They are super fast and fun to race against.

11. Who are some people who have inspired you both in your driving career and your personal life?

MW – There are a lot, but the first one to come to mind is Rob MacCachren. How can you not love this guy? I showed up to the Midnight Special (I think it was 1994) and he heard I had never been around the course. Rob took me through a very impassioned, animated prerun while we were standing around waiting for the sun to go down. When I got out there it was like déjà vu. He had nailed it, right down the specific rocks to look out for and how to attack some of the trickier turns. It was my first off-road victory. Rob has continued to maintain this passion, winning countless races and being an all-around good guy in the process; role model for sure! As far as my personal life goes, there are countless people I have gleaned from. I believe we take something away from everyone we encounter. Therefore, it occurs to me that by mentioning anyone, I would forget someone. So, if I have met you, thank you for helping me in my journey.

GW – When I was a kid I always liked AJ Foyt and Rick Mears, but my biggest inspiration for racing and my personal life has always been my Father.

To learn more about TSCO Racing visit their website at http://tscoracing.com.