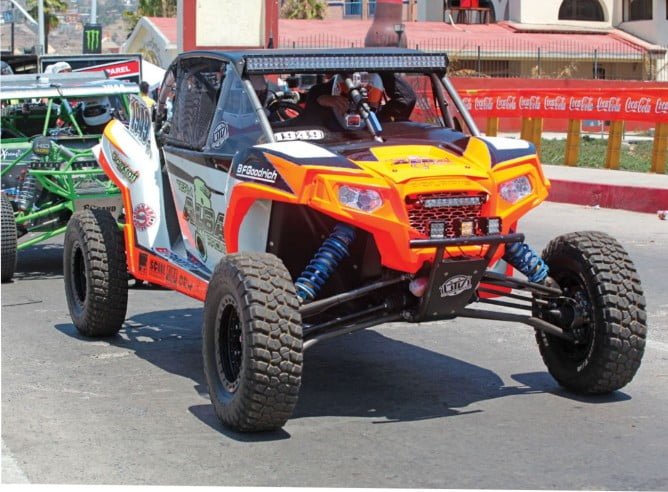 For immediate press release…
CALIFORNIA CITY, CA – December 5, 2015 – AVE RACING/BAJA PROMOTIONS announced today that it has added the “Super 1900 Class” to its roster of classes for the 2016 PURE UTV OFF-ROAD RACING SERIES, which starts January 23, 2016, with the running of the PURE “150” in California City, CA.

Adding the “Super 1900” Class will make it easier for racers who are currently competing in the Nevada, Arizona, and Baja series, to just step over between races to run the very popular and very affordable Southern California Series, without having to do any modifications to their car and still keep their same numbers during the year. AVE will honor the 1900 numbers if requested.

In the past, many racers in the open 1900 Class of UTVs wanted to compete but were not quite sure if they fit the Pro 1000 Class in the AVE/Baja Promotions Series. Now with the adding of the “Super 1900 Class,” those racers can step right into their own class and compete for basically the same amount of pay-back money they are competing for now but with much less of an entry fee, which is truly remarkable and inviting.
Moreover, the move may encourage some in the Pro 1000 Class, currently, AVE’s largest Pro Class, to move into the Super 1900 Class, to augment the Pro purse. The differences between the two are subtle.

Race Director, Alan Bell also stated, “We want to attract some of the drivers that race the BITD and SCORE Series to our series, where they can experience every bit of the courses they run in other series, but in short spurts. We have it all here in Cal-City. The challenge and testing opportunity are still there. Also, it’s easier to “chase” and pit, while communications are excellent.”

Race promoter Lou Peralta added, “This year we are switching over to a GPS-based Series, so those Super 1900 guys are experts in navigation and usually have top notch Navigators. Therefore, it won’t take much for them to fit right in. What is nice is that for a $400.00 Pro entry fee, $200.00 of that goes right back into the Pro purse. By the time you figure it, you are getting 50% (highest of any organization) of the Pro entry fee back, while, in some of the other series, you may get 8% to 10% only. We offer ‘More Bang for your Buck’ as they say.” “And the Sportsman Classes are just $200.00,” Peralta added.

Bell also suggested that now the “Navigator” becomes as an important factor to a winning effort as the  “Driver” and, of course, the entire team.

AVE/BP will continue offering the following classes: Pro and Sportsman 1000; Pro and Sportsman 900; Pro and Sportsman 850, Unlimited 2 & 4 (1001 cc and over) Pro Only and two strictly Sportsman Classes; BONE STOCK 1000 and BONE STOCK 900. This class is strictly for those who just bought a car and want to see if racing is in their program. Absolutely no modifications to the car are allowed, except for safety and communications. Everyone must have a GPS system although. Also, only those who have entered the event will know what types of markers are being used in the event their GPS fails. A common person won’t have that information.
Peralta also announced that he will be able to provide the course files way in advance of the event to those who are signed up. They can download a “kml” file for Google Earth or an “usr” file for those who use a Lowrance unit.
Peralta added, “We are in discussions with several entities to perhaps add a feature to the GPS through the race car’s intercom system where a voice will warn of impending hot spots on the course and major turns. GPS units are already capable of sounding a horn any time you are off course. More on this later.” He said.

This year, AVE/BP also announced that both, the “Driver” and “Navigator” will each get exact points for every race, which will be added towards the year-end point’s championships. Consequently, there will be top Driver and Top Navigator of the Year Awards.

AVE/BP has six events on tap for 2016, five of each team’s best finish will count towards the Overall and Points Championships. Racers must compete in at least three events to qualify for year-end points.
Racers and Navigator, if not already, will also have to become members of FUTVI (Formula UTV International) to compete in the series.

In addition to the six-event PURE UTV OFF-ROAD DESERT SERIES, AVE/BP has also added two UTV events in conjunction with the “Ensenada Cup.” These will be May 28 and October 1, at Ejido Coronel Esteban Cantu, in Punta Banda, Ensenada, Baja California, Mexico. Best total points for the two events will be used to award the “Ensenada Cup.”
For more details, visit AVE/BP at www.averacing.com or send an e-mail to [email protected] – Correspondence to P.O. Box 2141, California City, CA – 661.524.1550 – Toll-free fax is 877.842.3052 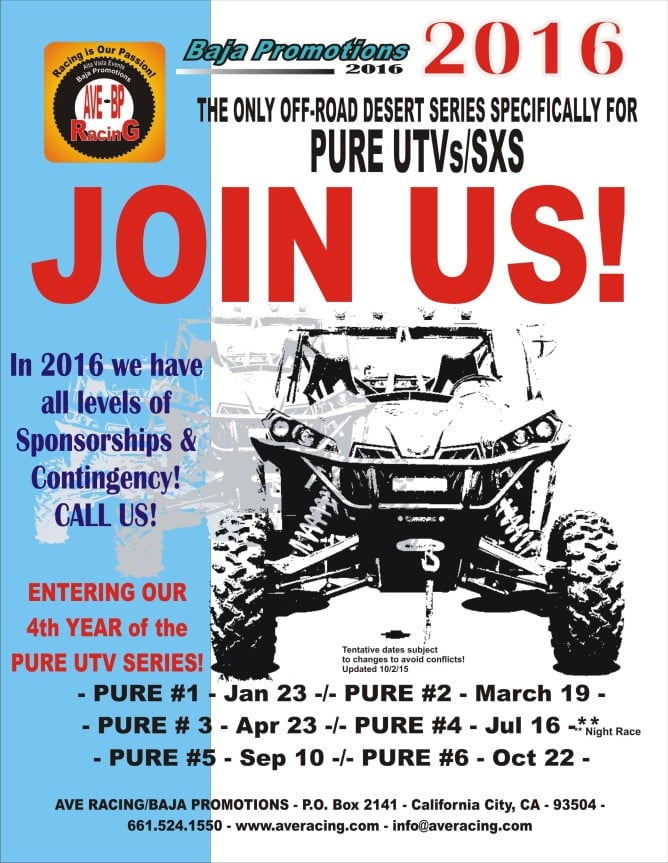