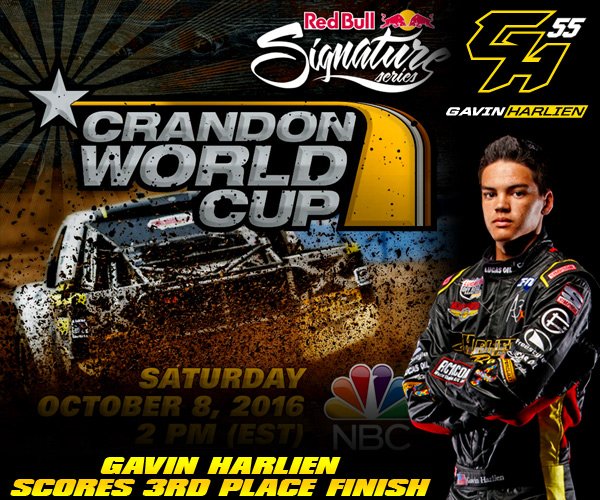 Off Road Truck Racer, Gavin Harlien, pilot of the #5 ProLite, took on the very best of the best at the “Big House” of Crandon International Raceway and earned a 3rd Place Podium Finish at the Crandon World Cup. Slated as one of the biggest races of the year, the huge jumps, high speed turns, crowds 100K thick, and large cash purses also make it the most exciting event in Short Course Off Road Racing. 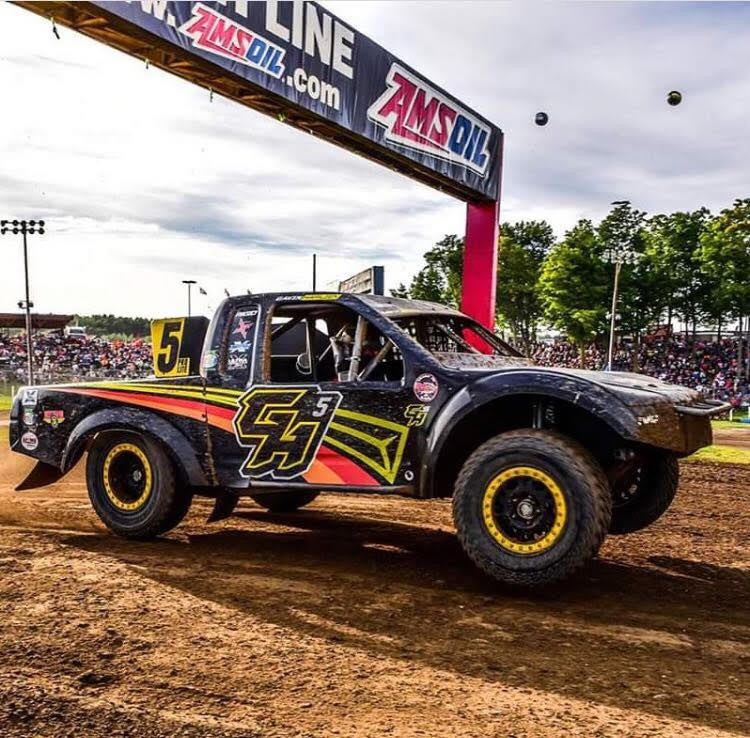 This would be the 47th running of this event but the first running of the Red Bull / Amsoil World Cup Race. Gavin left his west coast comfort zone and made the 2200 mile journey to the north woods of Wisconsin to take his skills east. Harlien and his team had only one seemingly impossible objective and that was to simply beat the TORC Series regulars and the East Coast guy’s on their home turf.

With zero seat time at Crandon, Harlien was optimistic and excited just to run on this historic track. Gavin had made the journey two other times but could not compete due to injuries suffered at races the week before the 45th and 46th event running. Previously present for the excitement but not participating in the races, Gavin commented; “It killed me to watch and not be out there racing.” This year was different, Harlien was healthy and poised to show the world his honed skill set as one of the top Pro Lite racers in all of Short Course Off Road.

Harlien made his presence on the track known early on by running 6th fastest in the timed scoring during Thursday’s two practice sessions. The team nailed the setup and the #5 Pro Lite seemed to be dialed-in from the get go. Gavin and the crew agreed that the truck was perfect and no changes were necessary. 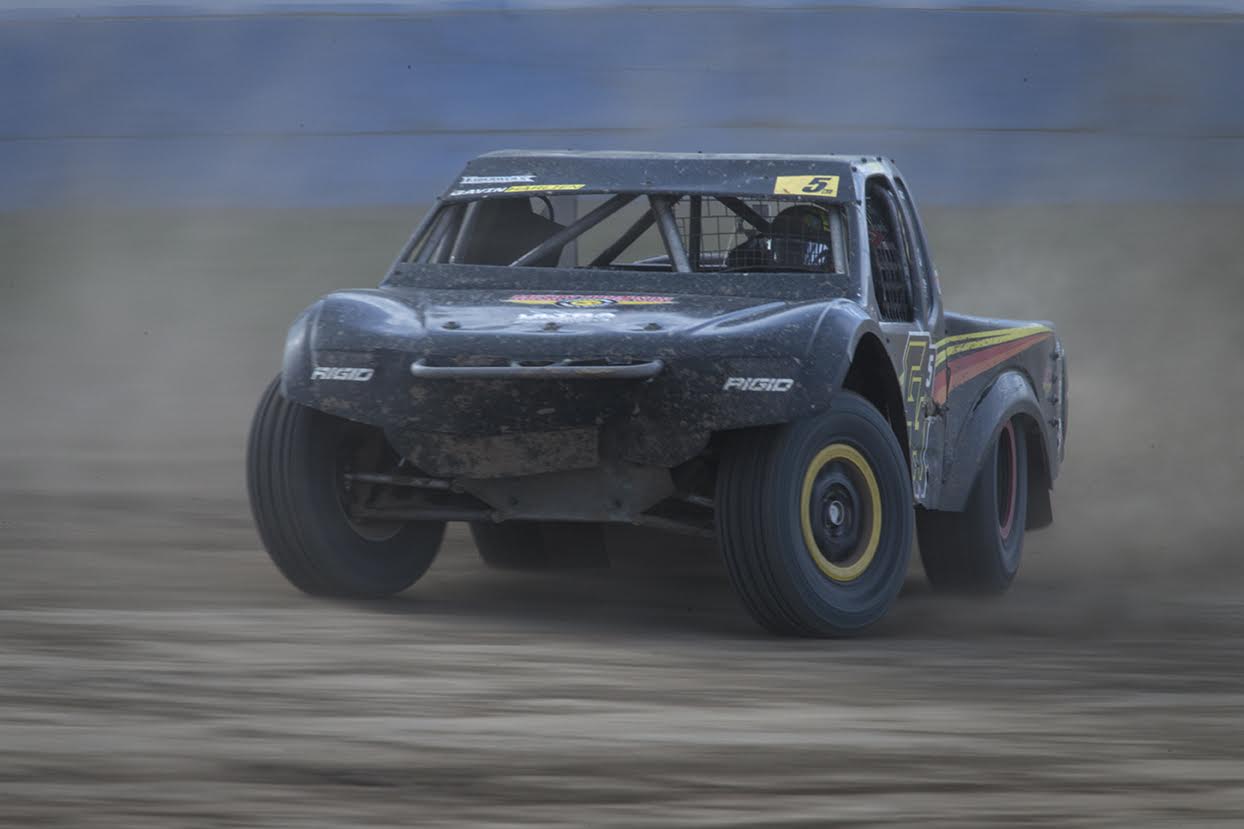 Saturday’s race had Gavin starting 7th on the line. When the green flag dropped Gavin came out of Turn 1 in 5th position but was spun from contact by other drivers in the race start melee. Now from dead last, Harlien powered the truck around and pointed it towards the front row and began methodically picking drivers off one by one. During Gavin’s charge to the front, more contact was made resulting in another spin out and forcing him to the back of the field. With the laps ticking down, the race nearing the finish, Harlien made yet another valiant effort to gain and overtake more positions. Gavin was able to work his way back to finish inside the top ten. The bigger picture was that Harlien was able to gain more seat time and save the truck for the World Cup Race on Sunday.

Qualifying for the World Cup on Sunday morning saw Gavin lay down his best times of the weekend only 3 tenths off the top time. This would be quick enough to secure the second spot off the pole for the start. Everything was shaping up to propel Gavin forward and put him in position for success.

The Crandon World Cup saw a field of 20 trucks line up for the start. The Green Flag sent them off into the legendary Turn 1 at nearly 100 MPH. No words can describe this scene but the race can be viewed in its entirety by tuning into Red Bull TV and navigating to past live events.

Gavin got a great start and entered Turn 1 in 3rd and by the start finish line was sitting 2nd. Harlien held the position for a lap but Travis Disnmore eventually passed by with a slick inside move. Gavin ran him clean and both drivers looked great battling clean and fast. Harlien held on to 3rd place up to the Competition Caution. When the green flag dropped the race winner Kleinman made an inside move to take third from Gavin in Turn 3. Gavin did not give up and focused on the guy’s in front of him. Harlien’s spotter, Jeff Knupp, instructed Gavin with some sharp encouragement to get him motivated but to race smart & patient and the truck will get to where it needs to be at the end. “GO,GO,GO Go get it!.” Gavin toyed with his race competitor and set up to make a perfect cross over move to secure the third position right before the White Flag signaling the last lap. Gavin was just one gear short compared to the top two but made a valiant effort to take the win. In the end Harlien held onto 3rd place and made an attempt to the inside for second and was short by half a truck. The team was elated with the finish after a tough year in the Lucas Oil Off Road Racing Series. This was truly Gavin’s day. “I’m so pumped for my team and myself after having a tough year with a new truck,” said Gavin. “We came hear not expecting anything and left with a medal for a hard fought 3rd place finish. I want to thank all those who have helped me get here; Mickey Thompson Tires, Ultra Wheels, Extreme Manufacturing, Pro Power Engines, Dynamic Motorsports, Stoney Transmissions, Rigid Industries, FiberwerX Off Road Fiberglass, VP Racing Fuels, Howe Performance Power Steering, TRH Wiring, and my crew guy’s; Jeff Knupp, Jimmy Owens, Jonathan Kizziah, Clayton Reichard, Chris Ramey, and my Dad Chris Harlien for making all this possible.”

EVENT BROADCAST COVERAGE: The Crandon World Cup will be aired on the Red Bull Signature Series on NBC Sports on Saturday October 8th, starting at 2:00 p.m. (EST). Event Coverage can also be found on Red Bull TV under Past Live Events.