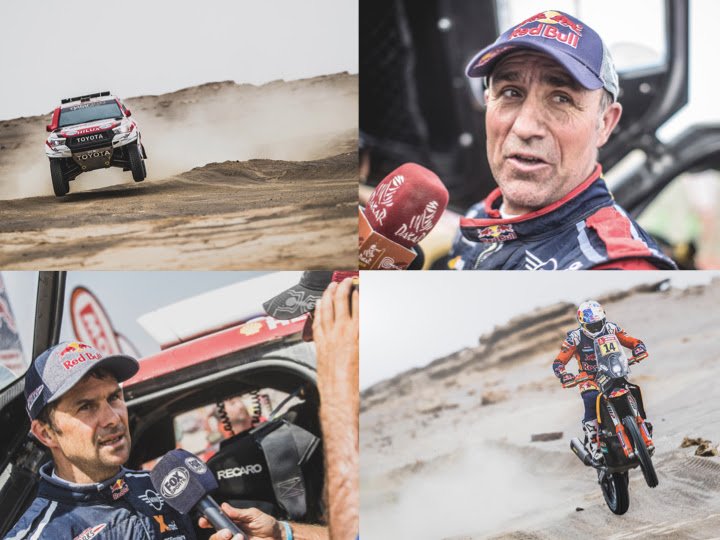 The new cross-country rally season is alright hitting top gear as a gang of world class offroad racers target glory this year. The upcoming Abu Dhabi Desert Challenge will welcome a number of high-profile Dakar Rally champions as well as a host of exciting, up-and-coming competitors. The challenge for all entered into the rally will be the same – master 2,000-kilometres of desert to take home the big prize.

Elsewhere, current Dakar Rally champions Nasser Al-Attiyah (QAT) and co-driver Mathieu Baumel (FRA) will tackle the Merzouga Rally in Morocco. Nasser and Mathieu have made the perfect start to 2019 with victory at the Dakar as well as at the Qatar Cross-Country Rally. Now the duo are focused on taking the chequered flag of the SxS race at the 10th anniversary of the Merzouga Rally.

“Every race is important. Whatever race we enter, our aim is always to win.” – Nasser Al-Attiyah

Meanwhile, the Abu Dhabi Desert Challenge is the second race of the 2019 FIA World Cup for Cross-Country Rallies, following the Qatar Cross-Country Rally. Returning to race the rally after an absence of nearly a decade is 13-time Dakar winner Stéphane Peterhansel (FRA). Peterhansel will race a MINI John Cooper Works Rally alongside his wife. Andrea Peterhansel (GER) will be giving pacenotes to her husband for the first time in the car category after several SxS races together.

“I’m really looking forward to the Abu Dhabi Desert Challenge – I haven’t been there for ages.” – Stéphane Peterhansel

Also heading to the famous Yas Marina Circuit for pre-race scrutineering this week are a pair of MINI John Cooper Works Buggies. One will be under the control of Kuba Przygonski (POL) who with co-driver Timo Gottschalk (GER) recently won the Dubai International Baja. The second MINI Buggy will be driven by five-time Dakar bike race winner Cyril Despres (FRA) who joins forces with co-driver Dani Oliveras (ESP) for the first time.

“The desert in Abu Dhabi is very special because there you’ll find a lot of big dunes – I always had a lot of fun there.” – Cyril Despres

“Once you have won the race once it has to be your goal to do it again and that’s what I will be aiming for.” – Sam Sunderland

Sunderland’s fellow Red Bull KTM Factory Team rider Luciano Benavides (ARG) is also in Abu Dhabi as the youngster looks to build on his Top 10 finish at the Dakar earlier this year. Among those looking to chase down the factory riders will be sand racing specialists Mohammed Balooshi (UAE) and Mohammed Jaffar (KUW).

We’ll also be keeping our eyes on the quad contest where Fahad Al Musallam (KUW) will compete on a Yamaha Raptor 700. Al Musallam is a rider with a growing reputation thanks to a string of wins in his local region.

Following the Abu Dhabi Desert Challenge’s start podium on Saturday, March 30 it’s off to the desert for 1,283-kilometres against the clock spread over five stages. There’s sure to be plenty of drama in the dunes of the Liwa Desert before the winners are crowned on Thursday, April 4. The Merzouga Rally takes place in the Moroccan sands of Erfoud from March 31 until April 5.

Nasser Al-Attiyah: “Every race is important. Whatever race we enter, our aim is always to win. Last year we were developing the car a lot, but it was a clean performance this year. We won the Dakar Rally and now the Qatar Cross-Country Rally. It has been great.”

Cyril Despres: “I’m looking forward to the Abu Dhabi Desert Challenge, we had a long practice session in the dunes during the Dakar. In addition, I can’t wait to sit in the buggy and race again. The desert in Abu Dhabi is very special because there you’ll find a lot of big dunes – I always had a lot of fun there. Jean-Paul (Cottret) unfortunately had no time and that’s why I’m competing with the former motorbike driver Dani Oliveras. He did a very good job at the Dakar in the SxS.”

Kuba Przygonski: “The Abu Dhabi Desert Challenge is a very nice rally. Since we’re only driving in the sand and dunes it’s not easy. Most pilots like to drive there – it’s nice and warm and features great landscapes. We drive the buggy for the second time and it will be interesting to see where we stand in comparison with the other pilots. It’s nice that Cyril and Stéphane are taking part, which makes the race more challenging.”

Stéphane Peterhansel: “I’m really looking forward to the Abu Dhabi Desert Challenge – I haven’t been there for ages. I think it was 2011 when I last drove there. I have nice memories of the rally. When I started on the bike we started in Dubai and then we went straight to Abu Dhabi. I think that in the end it was the same tracks as today. The rally is well organised. The special stages are not very long, but intensive. Navigation isn’t that difficult, but you have to have the right technique to cross the dunes. The last time I drove a 4×4 there, it was the first victory for MINI ALL4 Racing.”

Sam Sunderland: “All of our races are in extreme environments and it’s necessary to take care about your fluid and electrolytes, but I think most of the top riders have this under control. It’s normally new riders that aren’t used to the heat or exertion for long periods. I’m in very good shape, which is important at the start of a new season. Once you have won the race once it has to be your goal to do it again and that’s what I will be aiming for. We will just have to see how the strategy plays out without a prologue.”