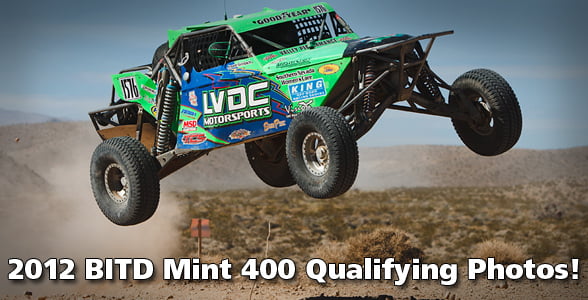 The 2012 BITD Mint 400 race is one step closer as qualifying for start positions was held today in the northern Las Vegas desert. Teams charged the qualifying loop hard to try and get to the top pushing both themselves and their vehicles. A few teams pushed a little too hard which caused flats, mechanical failures and rollovers. Jason Voss went for a ride right before the finish line, and Cameron Steele put his #16 truck on its roof after passing the finishing line.

The course kept getting more tore up as the 85+ vehicles went over it, bringing up big rocks, ruts and silt throughout the loop. Results will be live streamed here on RDC at 8pm so don’t miss it! Some early favorites are Householder, Childress, MacCachren, TSCO, PAB and both LVDC cars. We’ll keep you posted throughout the night!