It’s a wonderful thing when racers and charity come together. Despite the fact that most of these guys spend all of their hard earned dollars on their trucks, buggies, and UTVs, sometimes even down to what seems like the last cent, racers always find a way to still donate a toy to kids in need. This year’s Toys for Tots 200 had a smaller turn out and the weather was harsh but that didn’t stop MORE from having a successful event in the end. To that, it came down to whom could stay in it and who could stay together at the end of the 200 mile loop race at Barstow, CA.

Race start was at 8 am, with a wind that could cut bone and temperatures that felt like Mother Nature was against the MORE crew and racers. The 55 drivers of record and their support would have to battle that all day. The rain from the night before also helped keep the dust to a minimum but what was kicked up would be quickly carried away by the wild, cold winds of the Mojave.

It was also good that these drivers were toughened against what insane weather the desert can throw at them. There were less fortunate children looking forward to the toys these drivers donated. Bill Markel, Race and Tech Director for MORE, helped to create and rename the Holiday 200 to the Toys for Tots 200 and it holds a special place in his heart. About 10 years ago Bill approached Jim Clements about changing the name to the Toys for Tots 200, to which Jim agreed as at the time there signage and t-shirts hadn’t been made. Car counts were down, so donations probably were not at typical levels but Bill says, “It’s something I want to work on getting back up.”

It’s also to be expected as there were several events being held in two weekends and a few championships already crowned. BITD held the Henderson 250 that weekend, as you saw here on Race-Dezert, and the SNORE Rage at the River would be the very next. Many of these drivers participate in multiple series since the rules are nearly the same across each. It equals maximum payout, exposure, and possibly experience for those still new to open desert racing. 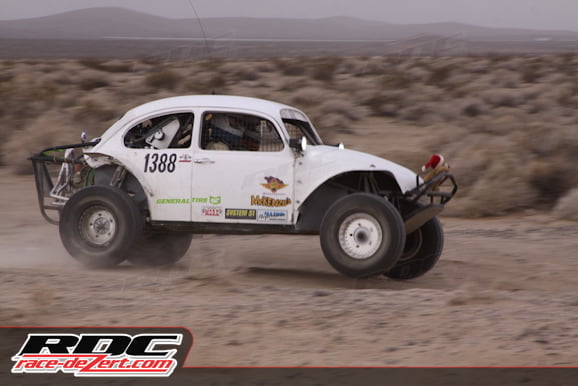 The Toys for Tots 200 would bring out the family aspect of racers in not just the community, but a family of racers themselves. The Tjelmeland family of Sue, Vince, Adam, and Breezy along with Shane Laptka of the Sabina Racing team. This was Sue’s first time racing and she would be the driver of record in the 1388 Buggy of the Trophy Challenge class. Vince, her husband, raced in the 1088 Buggy along with Adam for its first three laps and then would finish in the 1388 after trading with Sue.

“It was really difficult, but fun in the first 8 miles,” Sue told of her first experience in the 1388, “then I’d see the faster cars come up and begin to bump us.” Sue laughed at that experience saying, “So, that’s always exciting! You’re bopping along in your buggy and then you get nerfed thinking, ‘wow, I better move over!’”

By about 11am, the weather decided to bring a wet change to the drivers and began to sprinkle and give a light rain. Well, at least on the start line side of the course as over closer to the mountains and the Slash X Cafe, it actually began to sleet and ice a bit. Fortunately, nothing would stick and would help keep some of the loose sand down for a bit. That weather would come in spurts and never really stick around for long because of the wind. 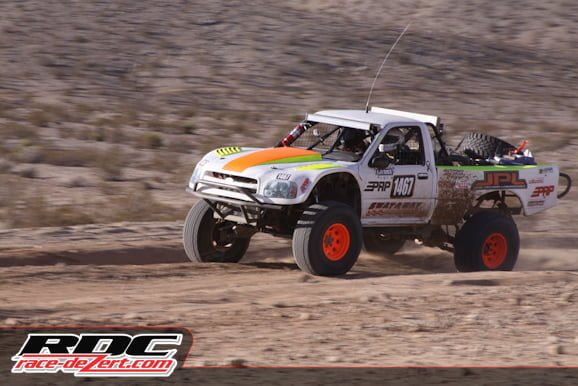 The racing was exciting and Class 5 race winner edged out second place by less than 3 minutes while Class 10 would be just under 3 minutes between the top two. However, Class 1450 would have the closest finish with only 2 minutes and 14 seconds separating Jordan Grane in the 1467 Toyota Tacoma and Brian Blaggs in the 1491 Toyota Tacoma.

This was the debut race for the 1467 truck and team as Joe Pecora explained, “We built it with a bolt-on kit with leaf springs and single Sway-a-Way shocks.” The simple and easy to maintain truck also used a Toyota V6 along with a 5-speed that came in it, which powered it to the fastest lap in the class with an average speed of 36.3 MPH on the final lap. “It was awesome,” recalling the race, “We got to battle the whole time because the class was so tight and that just made it real exciting.” The track was starting to deteriorate at the end, despite their fastest speed on the last lap, “It felt like we were hitting curbs the whole time.”

The Toys for Tots 200 would also be about keeping your vehicle together. Vi Tang of the 1478 Engage Off-Road Toyota Tacoma, who was also in the 1450 Class, experienced several problems. “The race was awesome, but unfortunately on the first lap we lost the most of the rear brakes,” Vi explained, “So, we tried to finish the race on minimal brakes.” As if that wasn’t enough, the truck finally lost all rear brakes by lap 3 then on lap 4, “we broke a driveshaft.” The brake issues have been a season long problem and the driveshaft was “just a matter of time. Last race and wear and tear, it just finally gave out. “

Despite setting some very competitive times, Mike Pacewiczh of the AP Fab 135 Class 1 Buggy also experienced failure. “We broke the clutch; it’s a fairly new car so we’re still trying to work out a few bugs.” It was enough by mile 22 of lap 5 the crew called it a day. “The car was really predictable, but this is a typical Barstow race with a lot of rough stuff and some fun stuff, but overall we were happy with the performance of the car except obviously the clutch.” 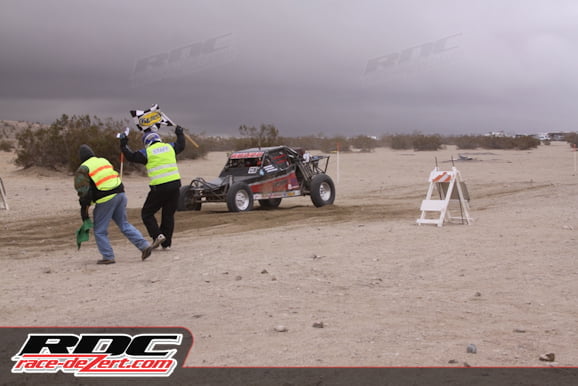 As the final car was greeted enthusiastically by Bill Markel, who was also flag man at this event, the race was finally over. Most of the drivers, worn down by the cold and windy conditions, were able to leave Barstow with either a trophy or vehicle that was mostly intact. However, all drivers could leave knowing that they had made a difference in a kid’s Christmas this season by the donation they had made before the start of the Toys for Tots 200 in the Mojave Desert on that bitterly cold day. That should be reason enough to hold their heads high. 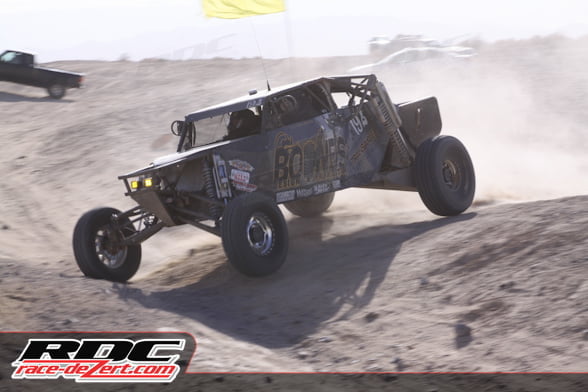 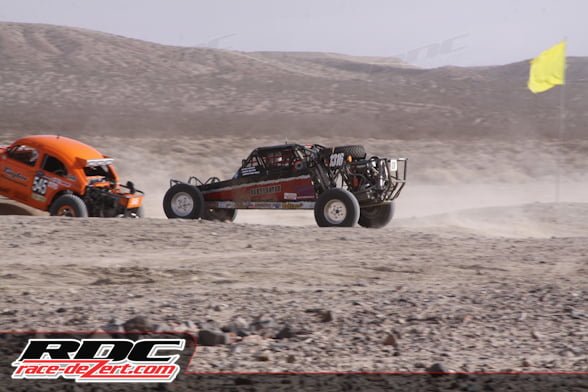 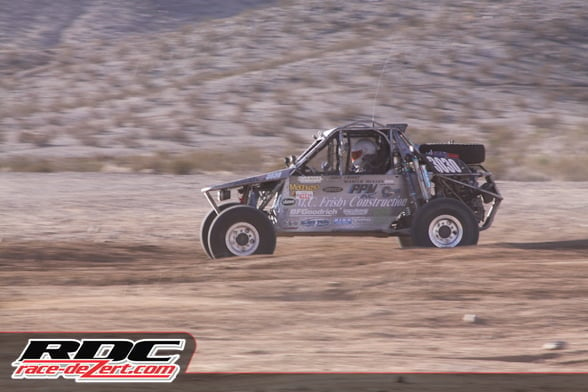 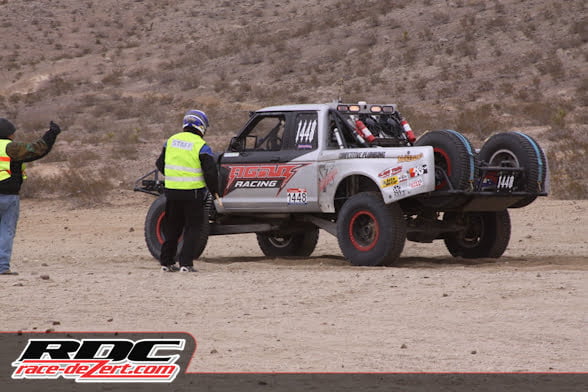 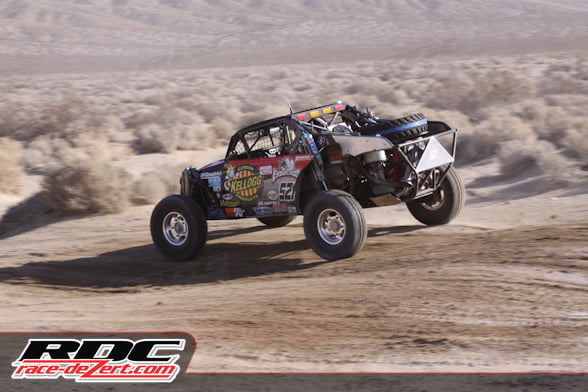 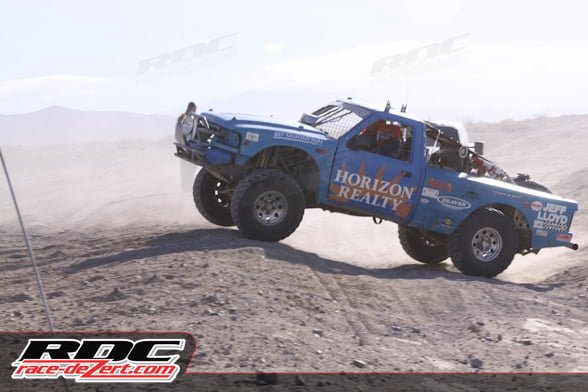 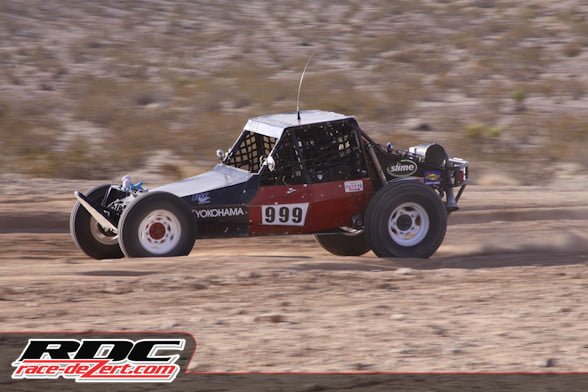 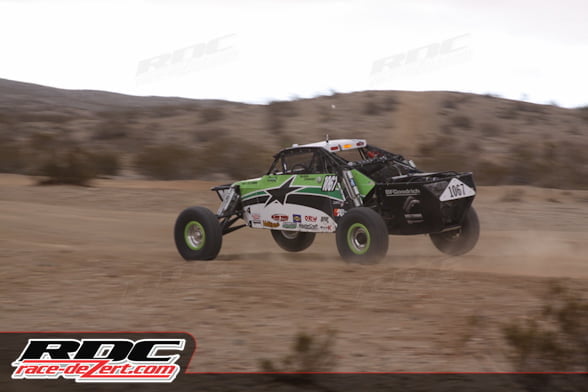 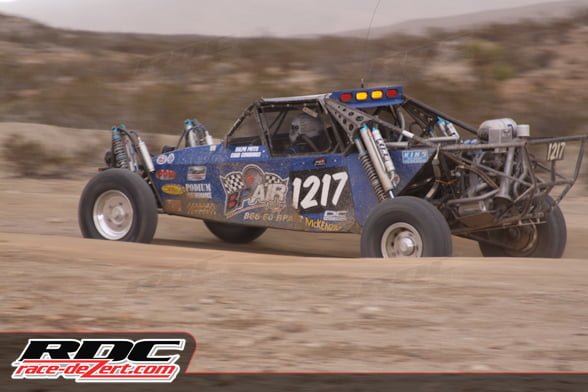 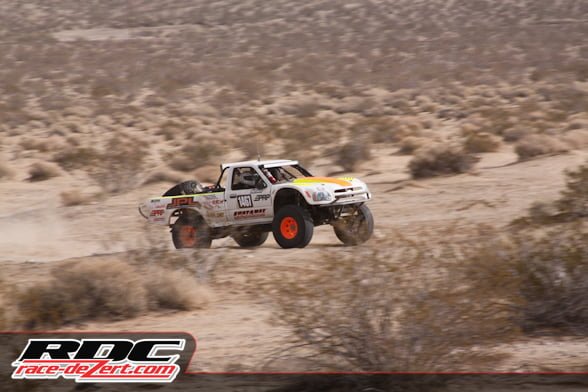 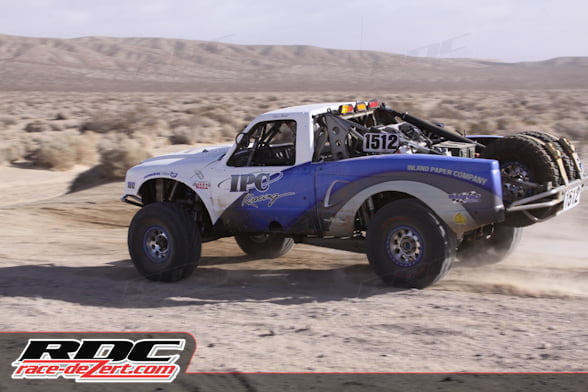 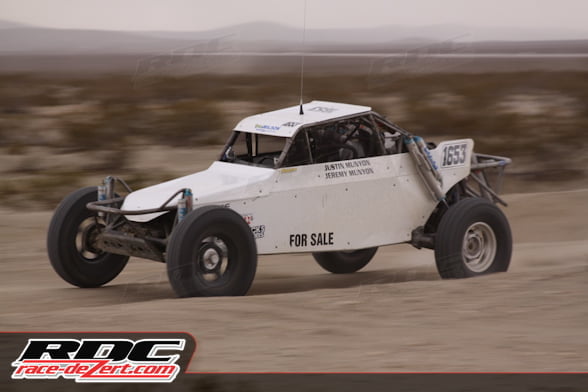 Photography and words by Justin Banner