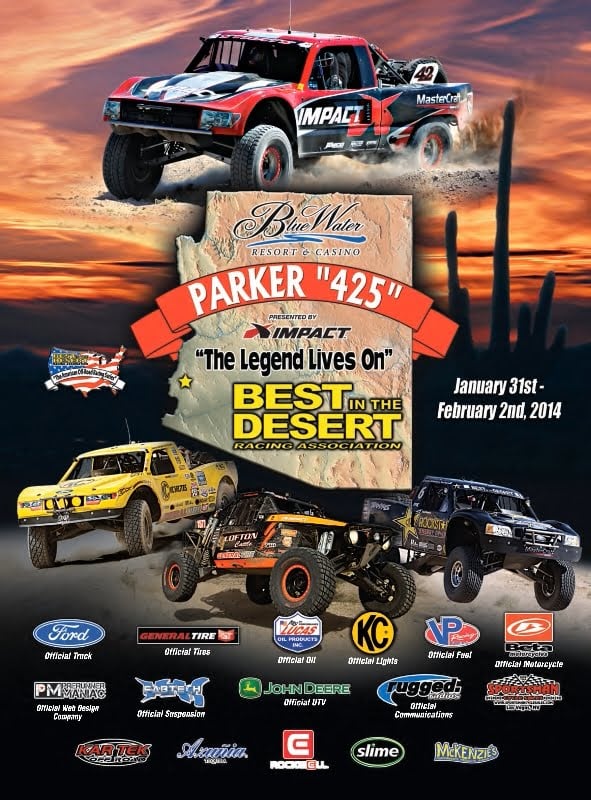 Best In The Desert, the world’s largest off-road desert racing organization, announced that more than 220 entries have already signed up for the 2014 Blue Water Resort & Casino Parker “425”. Casey Folks, director of Best In The Desert said, “We now have 39 Trick Trucks, 48 Class 1500 and 39 class 1000’s registered to race….we’re well on our way to having a record-breaking entry for this year’s race. The interest has been overwhelming in this legendary event and I know 2014 is going to be an awesome year for not only us, but also for all of our great and loyal racers.” “The Legend Lives On” as the annual BlueWater Resort & Casino& Casino Parker “425” presented by Impact in Parker, AZ, January 31 – February 2 kicks off the Best In The Desert’s 2014 six-race schedule for the car & truck classes.

The race weekend actually gets underway on Thursday, January 30th, with the Time Trials where the Trick Trucks and Class 1500 cars go head-to-head on a specially designed course to determine the first overall starting position and claim the coveted $1,000 Team Ford “Pole Award”. Directly following the Time Trials, participants will parade their vehicles to the center of town for the “Downtown Parker Experience”. The “Downtown Parker Experience” features all the Time Trials vehicles on display for race fans and local residents to check out up close along with live entertainment all afternoon long.

The fast moving, exciting Napa Parker Pit Crew Challenge presented by Impact and the Down & Dirty Radio Show, will be held in conjunction with the “Downtown Parker Experience” and take place at 5:30 PM on Thursday. Race teams signed up to compete include: Jim Beaver, Steve Strobel, Scott Whipple, Gary Weyhrich, Mark Weyhrich, Will Stats/Robbie Pierce and Kevin Curtis. Come experience these teams (and more) battling for for bragging rights! The competition will feature a maximum of 16 Trick Truck teams competing two at a time in an elimination bracket with a minimum of $2,000 paid out in prize money. The Parker Pit Crew Challenge will also be streamed live on Race-Dezert.com. Safety equipment for the Challenge is provided by Impact. For more information and to reserve your spot to compete, contact Jim Beaver at [email protected]

The race weekend continues on Friday, January 31st, as contingency and technical inspection take place in the parking lot of the Blue Water Resort & Casino with the beautiful Colorado River as a backdrop. Race fans will have the chance to get up close to hundreds of race vehicles as they weave their way through contingency row as well as check out the latest off-road and racing accessories from the industry’s top manufacturers.

The 2014 edition of the Blue Water Resort & Casino Parker “425” officially gets underway on Saturday, February 1st, as the green flag drops just past 7:00 AM for the first car or truck on California Ave. in downtown Parker. The huge entry field will be off to challenge 425 miles of desert, battling the fierce competition and chasing their dreams of a 2014 class championship. The Parker “425” is also a very spectator friendly race. The famous “Parker Python” infield section adjacent to the main pit area is extremely popular with race fans. Another excellent viewing area is located along Shea Rd., just outside of town.