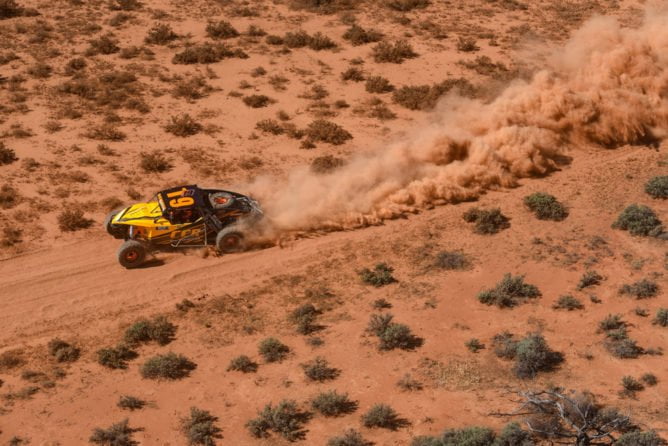 The Horizon Power Kickstarters Gascoyne Dash sprung back into life over Easter, returning with a new look loop race format based out of Carnarvon, 1000km north of Perth. The festivities commenced with scrutineering and a display at Carnarvon’s Civic Centre on Good Friday, before the 28 Bikes and Quads in the moto division and 28 Cars hit the track for 5 laps of the 70km course over the next two days.

Fresh from wins at the 2016 Baja 1000 and 2017 San Felipe 250, Daymon Stokie brought his good form to Western Australia for the Gascoyne Dash. Stokie stamped his authority on the event during Saturdays prologue then continued on to take the outright win in a time of 3hr 41min 50.9 seconds on his #4 Yamaha YZF450. While there was plenty of clean air out in front, it wasn’t all plain sailing for the Territorian with Stokie breaking two bones in his hand 10km from the start on day two. With the best part of 3 laps remaining and a 59 second lead up his sleeve Stokie pushed on, to set up an epic finish with 2015 winner Cody Upton hot on his heels. By the time the pair greeted the chequered flag, the margin had closed to a slender 3.6 seconds in Stokie’s favour, leaving Upton to finish second on his #1 Honda CRF450R. Rounding out the podium in third outright was Veterans Class winner, Stephen Mitchell on the #737 Yamaha in a time of 3:53:25. 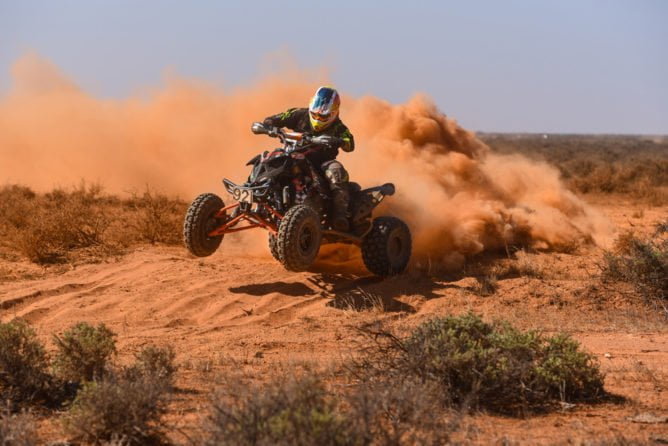 The battle amongst the Quads was equally close, with just over a minute splitting first to third over the 350 kilometres of competition. Riding his #921 KTM LC4 IRS, John Iuliano was rewarded for putting in the hard yards early, with the 1min 06sec lead generated during Saturdays two laps enough to keep #929 Dylan Richards and #971 Dale Harris at bay as they duked it our for second and third respectively.

All three riders on the outright podium took their respective class wins, with #4 Damon Stokie dominating Class 3 ahead of #3 KTM 500EXC rider Matt Lettey in second and Glen Taylor in third on his #501 Husqvarna. While #1 Cody Upton was the victor in class 2 by over 14 minutes from #544 Daniel Pratt and #640 Graham King in third. Yamaha rider #737 Stephen Mitchell continued the trend, cleaning up in the Veterans class ahead of the KTM’s of #122 Rob Pollard and #5 James Doherty. #240 Somers was unchallenged for the Masters Class win, completing the 5 laps in 4:15:14, while #777 Kenny took the Seniors Class honours ahead of #612 Knight and #73 Tamas. 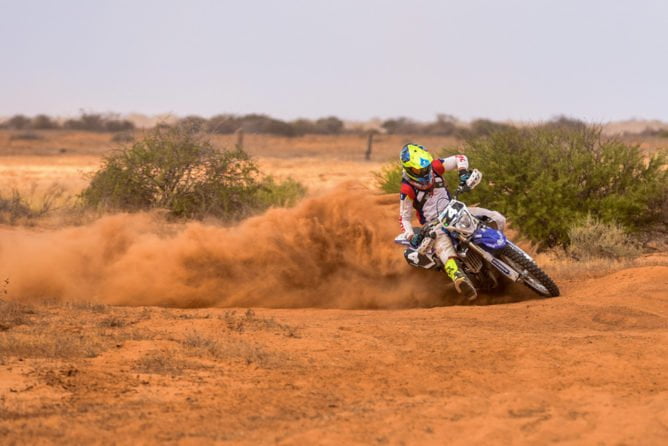 19 out of the 28 Motos that started completed all 5 laps of the 70km Carnarvon track, which threaded its way through flowing station tracks and swept across limiter bashing clay pans.

Returning to the Gascoyne fourteen years after taking the Auto category win in a Class 2 buggy, Troy Schoen and navigator Deb Schoen produced another blistering performance in Carnarvon over Easter, driving their #19 Probuggy to the outright win in an overall time of 3hr 37min 19sec. Starting the race in second after Saturday mornings prologue, Schoen quickly stepped in to the lead during the afternoons opening lap when pole sitter Harleigh Uren suffered a flat tyre in the de-skinned truck. From that point Schoen didn’t look back, gapping the field by 5 minutes during section two on Sunday morning, then extending it by a further 4 minutes in section 3 which included a quick pitstop to check over the front end.

Behind Schoen, the Prolites of Percival and Yeardley were going toe to toe. Jared Percival launched out of the blocks hard early, opening up a 1min 4.8sec lead in the #119 SS Racetech Prolite over the #171 BAT of Mal Yeardley. However on Sunday morning Yeardley hit back, slicing 20 seconds off Percival over the first two laps to ensure an enthralling finish. When the clocks stopped after 5 laps it was Jared Percival and Paul Tognela who took the class win and second outright, while Mal Yeardley and Michael Davis had to settle for third 54 seconds back.

The gloves were off in Carnarvon amongst the Extreme 2wds, as Doney, Pickersgill and Hardman wrestled for class honours. On the way to the chequered flag all three picked up a section win, however on overall time it was the #428 Protruck of Darryl Hardman and Robert Smith who took the Class victory and 4th outright in a time of 4:01:52.9, ahead of the #425 Truck of Greg Pickersgill and Greg Finlay. While the #406 A-Arm Baja of Colin & Peter Doney was third in class and 7th outright, just behind #168 Mark Jarrett and Glen Humphries in 6th outright and 3rd in Prolite. Daniel and Alf Allen drove a smart race to bring their immaculate #269 Super1650 home for the class win and 9th outright.

Piloting the #866 turbo diesel Patrol Ute, Mark Murray and Jim Ingham withstood a late charge from #848 Mitchell and Owen Davies to take the Extreme 4wd Class win and 8th outright. Davies took second in class and 11th overall, with #883 Russ Cullen and Daniel Fahey third in class after a tough weekend at the office saw their race end during section 2 on Sunday. Attrition took its toll on the Production 4wd’s with the Class winner, #790 Graham Bentick finishing on 4 laps after broken front shock mounts ended his day in the 79 Series Landcruiser. A DNF on the final lap forced #766 Chris May and Kerry Yaxley back in to second. #727 Steven Baxter and Andy Kingscott had been in a strong position in class until their engine expired leaving them third in class. While #764 Ben Armstrong and #732 Darren Schultz were also on the pace until mechanical dramas ended their day.

The Gascoyne Dash saw the debut of the WA Junior Driver Development program, with 16 year old Matt Beck taking the wheel of the Performance 2wd Kingswood alongside his father Jeremy. Completed just in time to make the startline, teething problems plagued the crew early, however as the weekend progressed the classic Holden hit it’s straps. Completing 3 laps and crossing the finishline to a standing ovation and taking the Performance 2wd Class win.

Eleven out of the 28 starters completed the full race distance. 2015 race winner, Brett Renton was a notable DNF after a broken stub axle ended his race on Sunday morning. While a big roll over during the prologue saw the weekend end prematurely in a cloud of red dust for #932 Mark Cramer and Adam Trewhella. Thankfully the crew walked away from the accident and the car will live to fight another day

Looking ahead, 2018 is shaping up to be a landmark year for the Horizon Power Kickstarters Gascoyne Dash with the organisers set to introduce an exciting new race format. An ‘Outback and Back’ point to point race at Easter between the coastal centre of Carnarvon to Gascoyne Junction which will tie together some of the best desert racing terrain the region has to offer.

The complete event results can be found here: