So a veteran racer, his son, a couple hardcore fishermen, an elevator safety technician and his son, a first time Baja noob and a guy who takes pictures for a living team up to race the NORRA Mexican 1000.
What can possibly go wrong?

The NORRA Mexican 1000 has been billed as a lot of things over the last few years. “The happiest race on earth.” “The – its not a race, race.” “The rolling cocktail party with vintage off-road cars” All these things are true, but the truth it can’t escape is Baja and anything can happen. Baja will make you a man, but it can also make you hang your head and ponder why you do such things. This is a brief explanation of this teams time of the good, the bad and all crap that happens in-between. The following is the saga of Bill and Trey Hernquist, Rob and Austin Ash, Rob and Garret Ott, Tom Fain, Mike Lund and Art Eugenio.

Its a mad thrash for the race. The car is a 20+ yr old Vintage Class 5 open racer, which was supposed to be ready a few weeks prior, but has had a few issues from its tear down and rebuild which included a new ecotec power plant that was giving the team a few issues. The day before contingency the car was heading north to Los Angeles to get diagnosed and fixed. Thankfully the issue wasn’t more than a few crossed wires and easily remedied. Typically you want some test time on the car before tackling 1300 miles of Baja but it wasn’t in the cards for this one. We would test as we raced so to speak. We packed up and headed south a 1/2 day behind schedule but at least in the right direction.
Once we get to Ensenada we look over the car and everything seemingly looks to spec. Time is limited so we go over what we can, check out a few things, make a few adjustments and are set for the following days start.

Day 1. The car is solid, its on, we feel good. We get in the car to take the start, get situated and bam, problem number one. We had checked the intercom the night before but now for whatever mysterious reason it doesn’t work. Navigation is a crucial part of the Mx1000 if you want to go fast. You do have a GPS file, which NORRA provides, that will guide you but all your dangers and speed zones that keep you on the side of the living are in the road-book. We tried a quick helmet swap which didn’t work so now we are reduced to hand signals. This is not ideal but it will work, especially if we still have the GPS file to help guide us.

As we take the first liaison to stage one we jockey for position to not start behind anyone slow. We ease into our start window with 30sec to spare. We’re on point! GREEN FLAG and we are wide open chasing the the dust in front of us and pass several cars before reaching Ojos Negros. This is where things started to really go sideways.

The night before the race we downloaded the course files off the NORRA site. In hindsight we’re not sure if it was a random glitch but somehow we ended up with the 2017 file in our GPS. All the notes leaving town and first few miles of the stage lined up but when we reached the outskirts of Ojos the GPS file said go left, the road book said go right. We followed the pink line on the GPS to the outskirts of Ojos at full song north of 100mph but now our notes aren’t matching up. The problem compounded by no intercoms, we raced ourselves into a 20min time deficit before we knew what was happening. A panic call to our crew and we confirmed we were way off and made our way back to Ojos and our crew for a mad scramble to get the correct file on course which was donated by a fellow racer. In the chaos we had to power down the car to reset the GPS, HOLY CRAP now our intercoms work again. Who knows what wizardry fixed the problem but we weren’t complaining. We continued on without issue for the rest of the day ending with a 20min deficit to the class leader Drew Belk.

Day 2 started out great with no issues, with the exception of a small navigation issue the guys did an amazing job and set a great pace. Somewhere along the way we discovered the car no longer had reverse, but who needs reverse right? This “little” issue would come into play more than once. Towards the end of the day on the last stage into Bay of LA Bill reports the car feeling a bit loose. Only minutes after Bill radios in reporting they collided a huge Boojum tree and are high centered on it, no reverse and dead center in the stage with no access for chase. We scramble and make contact with a fellow racer who was getting ready to start the same stage. With the help of the number 75 (The big dodge power wagon) we’re once again free to continue. This is Baja karma at its finest, the camaraderie between your fellow competitors to help you when things get tough is what makes off-road racing different than other forms of motorsport and just one of the many reasons to love it. Thank you Jeremy Benson and Ryan Barrett for your help!

It’s not over though as the front beam is bent back 45˚ on the drivers side and we’re yet another hour down to the class leader for the day. Once in Bay of LA we discovered that the bolts on both the spring plates had backed out causing the car to be super loose. It was long night of repair on the front beam but Paul Mischel and the guys from Racer Services it was good as new for the next day.

Day 3 Started great, the car was on rails passing lots that started in front of us. Then about 100mi in we lost the ability to shift the car. For the next 300mi we drove the car in 3rd gear only but still finished with a great result. Once we got into Loreto for service we found the shift fork in the gear box was broken. Welded up and once again ready to go.

Day 4 A bout of Montazuma’s revenge had struck our group overnight and reduced some of the crew to a shell of their former selves. Not to worry though as there were plenty of us to ride in the monkey seat and provide navigation. This was the only race we had zero issues with the car. A glorious run through some of Baja’s finest terrain from sea to sea. Once in La Paz we regrouped and decided that there was no way for our team to win our class with the 2:30min deficit we had to the class leader and we’d take our time and have fun driving to San Jose the next day.

Day 5 Starting in La Paz on the Sea of Cortez and racing towards the Pacific is something every off road racer should experience. The terrain in between is 100% picturesque Baja and the bone jarring bumps and sand in your face is worth every minute of it. As the boys raced towards Todos Santos we noticed the class leader was stopped on the tracker 50mi into the stage and soon our car had passed them. This could’ve been a number of things for them, a flat tire or broken tracker so we did not put to much emphasis on it.
Soon enough or car came through and to our driver change. Bill and his son Trey would take the car to the finish.

The car is good, the guys are hauling ass and BANG, 2nd gear explodes while they were climbing a hill. Bill hunts for a gear and its back to 3rd for the remaining 100mi with pieces of 2nd gear bouncing around inside the trans sounding like a metal box of rocks being shaken violently. Usually once a car breaks a gear it goes 3-4 miles and it stops with a big chunk of metal wedging its way into the other gears. For the next three hours it was a real nail biter wondering if we could even finish the race.

Bill and his son slowly made their way to the finish, calling off the miles on the radio as they chipped their way down course. Each hill climb, each tight turn felt like an eternity as we all knew at any moment the car could come to a sudden stop. Finally we see them coming to the last turn, the gear box can be heard over the engine with metallic clanking; they take the checkers to complete the day still not knowing the fate of the class leaders who had the lead since day one.

Shortly after we were told we won we learned the previous class leader, Drew Belk, had an accident and Wendy Belk had been injured. This news saddened us as we’re all one big crazy family when it comes to Baja. It was not the way we wanted to win. In the end for the team and this race, we were happy just to have finished. We never gave up despite the many opportunities Baja gave us to go home with our tails between our legs. We hope and pray for the Belks for a full recovery.

The NORRA Mexican 1000 is definitely a more laid back event than the usual Baja race, but make no mistake, it will challenge you, it will humble you, it will make you happy, sad, it will teach you things you didn’t know about yourself. Because Baja is hard, it has no friends, no enemies, it is the great equalizer, it is beautiful and at the end of the day it truly is better in Baja. 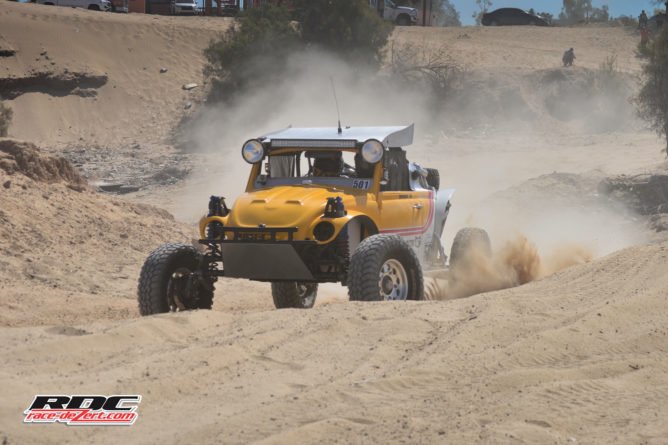 Art Eugenio
I was that Baja noob in 2018 and ignorance was bliss! I was there to win, which we did, but didn't think it would happen the way it did. In the end we won because less stuff broke on our car than on our competitors cars and a LOT of stuff broke on our car. I loved navigating through the silt beds and having the silt hit me in the chest, it was like powder skiing in Tahoe only a bit warmer. Great Memories and GREAT pictures, thanks for sharing your skills Art.