The NORRA Mexican 1000 is not a race.  But don’t tell the drivers leading their classes.  It’s a stage rally, but there is timing, winners, losers, trophies, glory and the agony of defeat.  Sounds like a race.  Many people treat it like a race.  Maybe it is a race.

Originally started in 1967 the NORRA Mexican 1000 later morphed into what is now the SCORE Baja 1000.  NORRA made its return in 2010 as a stage rally.  Instead of racers starting in Ensenada and racing all the way through to La Paz or Cabo, it is broken up into stages over four or five days.

This year, the rally was broken into five days of racing. Day 1 from Ensenada to San Felipe. Day 2 from San Felipe to Bahia de Los Angeles.  Day 3 from Bahia de Los Angeles to Loreto.  Day 4 from Loreto to La Paz and Day 5 from La Paz to Cabo.  Each day the drivers would complete both Transit Stages (not on the clock) and Special Stages which are timed.  The Transit Stages are meant to prevent speeding on the highways and allow teams plenty of off the clock time to fuel, make driver changes and whatever else needed before starting the next Special.

This year the final day had two new elements.  First, instead of the usual route of the last few years from La Paz to Cabo via the East Cape, the racers went Southeast out of La Paz and returned to the West Cape through Todos Santos before cutting across the peninsula to San Jose Del Cabo.  The second new element was a Secret Special Stage.  The maps and GPS files ended at the Start of the SSS and the only way to navigate the route to the finish was with the road book.  This added a nice touch to make certain everyone had to use the road book at least once.  2018 also saw a record number of entries with 245 teams signed up for the rally.

The team of Mark Post, Jesse Jones and Ed Herbst drove the infamous Riviera Racing Trophy Truck – aka the Diamante Negro (the Black Diamond).  The trio started eighth on stage 1 but quickly moved up to first on the road.  They used that position to control the pace of the race and build a 40+ minute gap over the first four days.  A mechanical issue on the final day caused the team to give up the first spot on the road but a quick repair got them back in the hunt.

The Riviera team took the checkers in San Jose del Cabo with 35 minutes over second place and became the Overall Winners of the 2018 NORRA Mexican 1000.

” The coolest thing I did this week was with the Riviera team and my three amigos (Jesse Jones, Ed Herbst and Co Driver Brent Bauman).” Mark said after the race.  “We drove from Ensenada through all of Baja looking at beautiful sights and having a great time.  We had one philosophy coming here.  We are all very experienced, the four of us know how to get here to Cabo.  Our idea was be consistent for five days.”

While Mark makes the race sound almost easy, there is more to the story.  Brent Bauman, who has been in the right seat of the Riviera truck for every mile over the last seven years told us about his NORRA week and how he managed the three unique personalities, driving styles and quirks of Mark, Ed and Jesse. 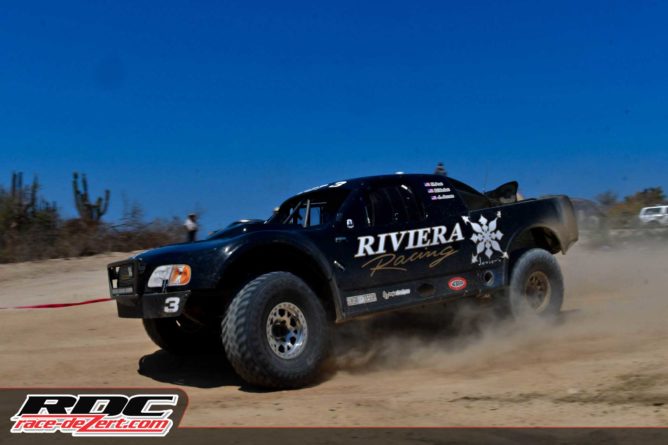 ” Every single stage requires a different psychology. I have so much confidence in all three guys, they are all super talented.  All with different skill sets, areas they excel in.  We tried to manage that in our plan this week. Put the driver in where they are the fastest.  Ed is a mountain goat.  He can grind through technical stuff without mistake.  He is so good at driving rocky goat trail type stuff.  Mark is completely different.  Mark is always cool and relaxed behind the wheel.  Very seldom can I wind him up, or need to wind him up.  He’s so fast, there is nothing he has not seen down here so his mental game is super strong.  Jesse Jones, he is the fastest MFer in the desert.  It was a very strategic race.  We talked about where Ed, Mark and Jesse should drive.  Use our strengths.  And push the truck where we know it has its strengths.  We knew on the last day we had to have that time cushion.”

“We went through a ton of adversity this week. It was not as easy as Mark thinks because I don’t always give him all the information.  He doesn’t know that each night we had things failing, that mid stage we had things failing.  We broke and idler pulley  the last day and Jesse threw the new pulley on but we had belt alignment issues.  We did a field repair with a grinder and it was perfectly Baja.  It threw things at us and we were able to use our experience and think fast and make good decisions.  I am so proud that this week we raced like Larry Ragland.”

Ryan Arciero and his father Butch raced the Bob Gordon Chenowth DR2 to a first in class and second overall in the race.  The car is all original from the old days except the high zoot race motor was replaced with a junkyard Camry motor to save money. “Me and Bob were teammates for about 18 years.” Butch said  “We campaigned that car through 1996 or 1997.  They Ryan and Bob drove that car in 1998 and won the Baja 1000.” Butch said.  “The car is just amazing.  I compare it to the Energizer Bunny.  This car keeps going and going and going.   It continues to run and gives it everything its got to get us to the finish. It’s a great design and was state of the art when Bob built it.  It tops out around 102mph and there had to be 100 miles of roads that Mark (Post) was doing over 120mph.   You have to make up time in the technical stuff”

“We were hoping we could win for Bob.  When Ryan came through the finish I broke down. I looked up and said Bob, thank you for leading us.  I tell you what, there were a lot of areas where I was driving and I asked him to help me. This is an honor for us to be able to win this for Bob.  I believe that Bob was up there guiding us.  A couple of times I got off the course because of dust or silt and I didn’t hit any rocks or trees, I got back on course clean, it was because someone was leading me in the right direction”

Lightning Larry Ragland injured his back while driving the Ultra Wheels Class 1 at the end of the first day near San Felipe. Lucky for Larry, Robby Gordon was able to take the wheel for a team of two scary fast drivers.  Larry recovered enough to drive the final day into San Jose del Cabo. The duo was fast enough to finish third overall and first in class.

“I tried to find someone with more experience but when I couldn’t I had to settle for Robby Gordon.” Larry said after the race.  “He was not real excited to get in my car because he was racing his Arctic Cats. He did it as a favor to me, and luckily he did it because it all worked out.  I had a great time.  I’ve raced against Robby Gordon since he was 17 years old, and he’s been a pain in my ass forever.  So it was nice to be teammates for one race.”

It’s no surprise that highly experienced Baja racers like Jesse Jones, Ed Herbst, Mark Post, Larry Ragland, Robby Gordon and Ryan and Butch Arciero were at the top of the leader board at the finish.

It was a big surprise to see King of the Hammers founder Dave Cole in 4th overall in a solid axle Ultra 4 car.  The NORRA course is different than a SCORE course.  Hundreds of miles of giant whoops would destroy many of the vintage racecars in NORRA.  Knowing that the Mexican 1000 course would be smoother and not a endless whoopfest, Dave Cole came up with a plan to win it all.

” I’m not shocked  I came here to win the overall.  I’m dead serious.  I say that because the same thing that wins every other race is teamwork, and we have a great team.  The course is not difficult.  People say Ultra 4’s can’t be competitive but they are competitive on this course.  Not a SCORE course, I can’t win the San Felipe 250, or the Baja 1000.  I can be competitive in the 500 because its twisty and tight – its technical.  Pick the right course with the right car and the right team and you have a shot.”

“4 wheel drive was a huge advantage.  We stopped for a minute and a half yesterday and lost the stage by 2 seconds.  And we were in dust for 20 miles.  Every time you touch the brakes in a 4 wheel drive car you are faster than everyone else. When you hit the brakes you have to hit the gas eventually and we accelerate faster than anybody.  Not top speed, I can only do 112mph.  I found out that you can’t run a rock crawler at a 112mph for 30 miles.  You melt the rear differential.   The oil was literally bubbling out of the diff.  We left the 5.83 gears in it, the car has the same setup as when it left King of the Hammers, except we added more fuel capacity.  That motor has 4200 race miles on it.  It’s a crate LSX, about 725hp at the crank.”

Many NORRA racers have commented about the memories they make during the Mexican 1000 and Dave Cole came home with a couple of doozies.

“The coolest thing this week was on the first day or two, we would go through a road crossing or pit area and teams would look at us like What the F?  By the last day ,every team was giving us the thumbs up.  Walker Evans and I were going back and forth out of San Felipe.  I passed him the whoops in a wash.  That is a lifetime memory, to pass Walker Evans in two foot whoops in a rock crawler.  In the speed zone after the wash, we were literally bumping into each other while side by side for miles on the road to Coco’s.  I see him at the finish in Loreto and he says ‘You’re a fat overweight ******.  But you’re really **** fast.’  That made my day.  Racing against Walker, Robby, Larry, Ryan Arciero, I am just a rock donkey so to be able to go wheel to wheel with those guys is amazing.”

In closing, Dave was able to sum up why NORRA is so much fun and so very different from any other desert race.

” It’s just enough stress and pressure to keep the blood going but you can still enjoy it and relax at the end of the day.  When you race the Baja 1000 you don’t remember what happened at race mile 80 by the time you get to the finish and you never go back and talk to a guy you passed at race mile 80.  But every night at NORRA you are bullshitting with the guy – we did this and you did that.  You’re having fun with it every day.  You basically have five individual races all the way down the peninsula.  Your team gets time to hangout.  You are at the beach everyday in daylight, it’s cool.”

So is the NORRA Mexican 1000 a race?  That is something each driver will have to decide for themselves.