AL-ATTIYAH AND KARGINOV ADVANCE THEIR PIECES…

Nasser Al-Attiyah (Toyota Hilux n°101) in the car class, and Andrey Karginov (Kamaz-Master n°309), in the trucks, win the 2nd stage of the 2018 SILK WAY RALLY. At the end of this marathon stage, without assistance at the bivouac in Elista, capital of the Republic of Kalmoukie… and of chess, the day’s two winners move their pieces forward. But on the eve of the return trip to Astrakhan, the match would appear particularly delicate and uncertain!

# Cars: Al-Attiyah remains in front… but only with front wheel drive! 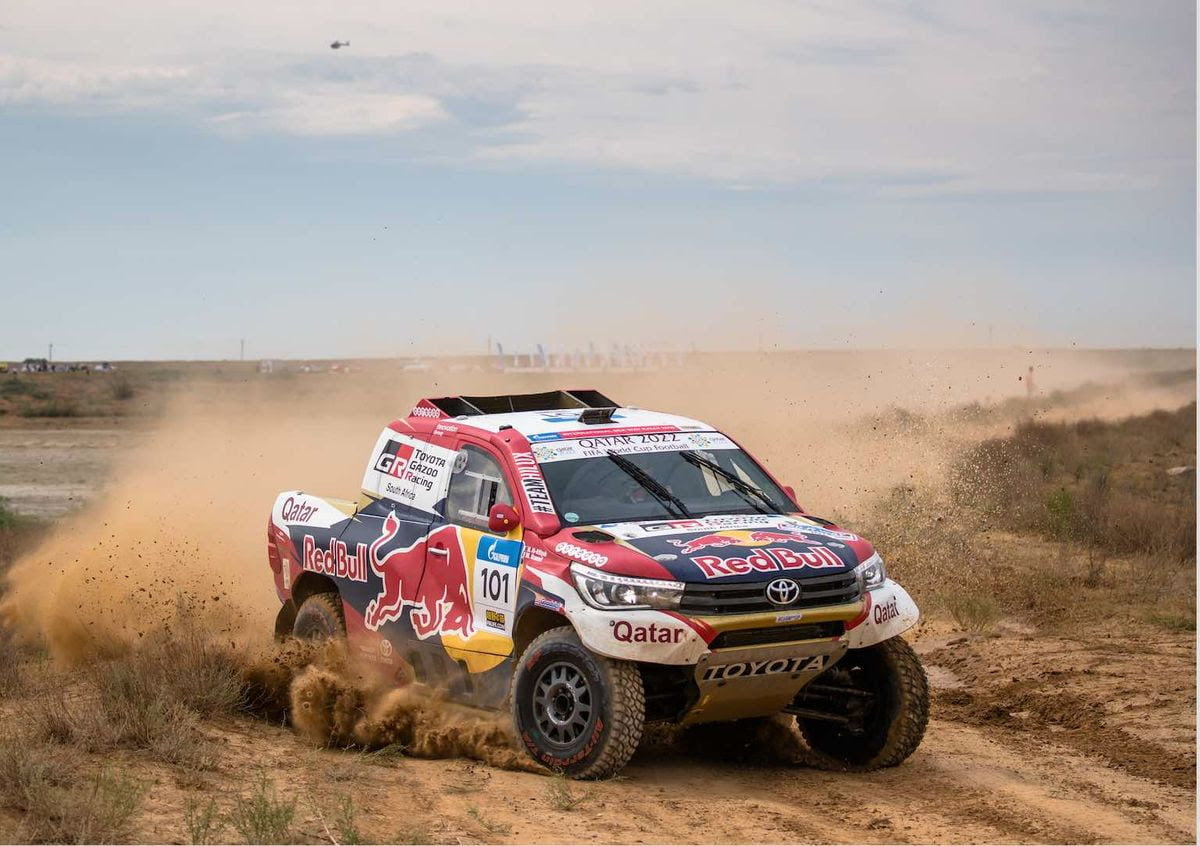 Cars: Al-Attiyah remains in front… but only with front wheel drive!

It has nearly been one hour that Nasser Al-Attiyah and Matthieu Baumel have been turning around their Toyota Hilux, cordoned off until tomorrow morning in the parc ferme set up in the heart of Elista. Despite a second win in two days, their concern is palpable. 125 kilometres into the second special stage the rear differential of their Toyota Hilux gave up the ghost. Not enough to stop the leaders but a problem that couldn’t come at a worse time, the day of the marathon stage, where the competitors are left to their own devices, without outside assistance. ‘Tomorrow will be a damage limitation exercise. If we lose 6 or 10 minutes it will be OK. But the transmission has to hold up until we get to the finish’, declares the Qatari driver, who in addition was penalised one minute for speeding on the stage. With that added to their time, the leaders are this evening only 3:34ahead of the Peugeot 3008 DKR Maxi No 107 of British driver Harry Hunt, third on the day, slotting in between the MINI John Cooper Works of Saudi Yazeed Al Rahji and a Nani Roma, who’s health, moral and racing spirit increased progressively as he approached the capital of the Republic of Kalmoukie. One thing is sure: tomorrow’s 332 km special stage back to Astrakhan is likely to turn into a fine game of chess!

In the T2 category, second on the day behind the Toyota Land Cruiser of Chinese driver, the Russian Anastasia Nifontova (Toyota Land Cruiser No 132) holds onto a comfortable lead overall in the production class. This evening in Elista, there are also two woman at the top of the T3 category. Taking full advantage of previous leader Nicolas Duclos’s (Polaris RZR n°117) roll after CP1, Mariia Oparina and Taisiia Shtaneva (Maverick X3 n°115) move up to the overall lead 1:30in front of the Bulgarian Cenkov (Quaddy Yxz n°130), winner of this 2nd stage. 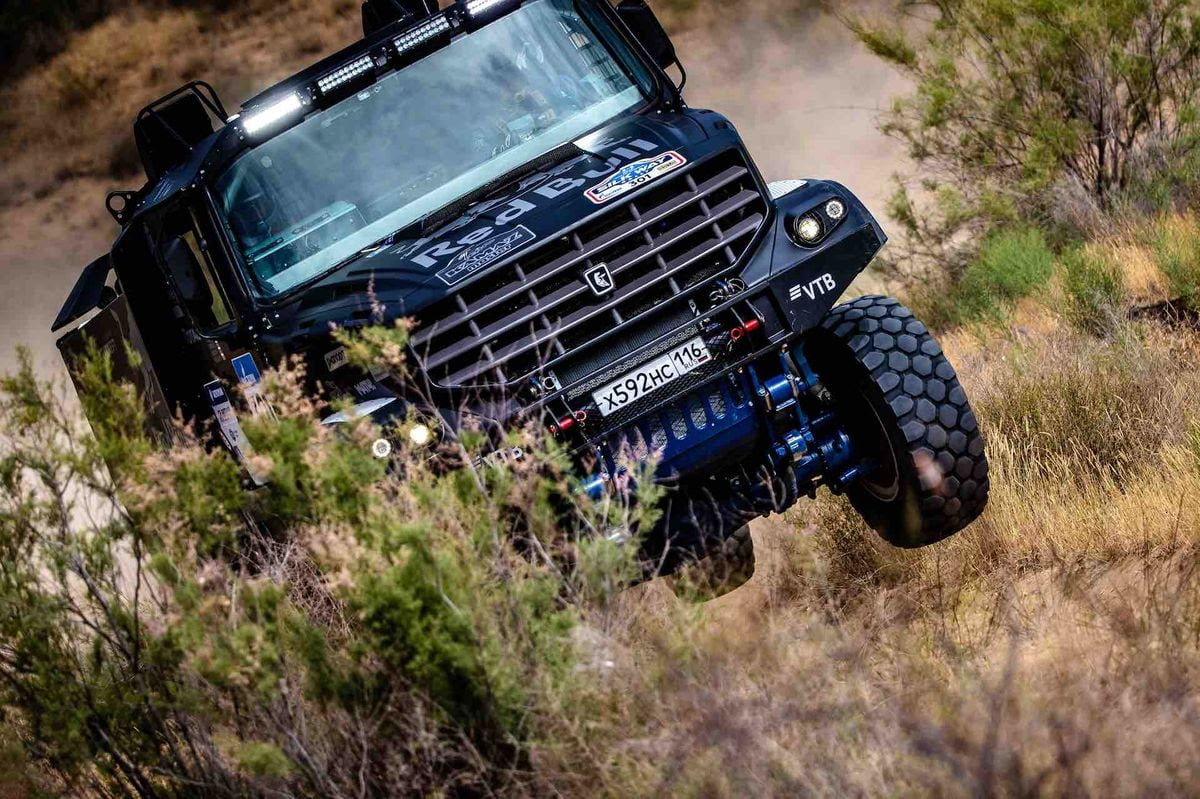 The day after a less than successful first stage, the result of a multitude of niggling little problems, Team Kamaz-Master were today back on form. And while Andrei Karginov (Kamaz-Master No 309) took the stage win ahead of team mates Sotnikov and Nikolaev, victim of a broken wheel 20 kms from the finish, Mardeev, Shibalov and Kupriyanov complete an impress grouping for the Russian manufacturer. Overall, Karginov is just 1:47ahead of Sotnikov, a gap that promises a fine fight between the two team mates tomorrow as they head back to Astrakhan. After the problems of Martin Van Den Brink (Renault Mammoet n°304), still repairing his front end after yesterday’s stage – he hopes to restart Tuesday -, this second stage caused big problems for all four of the Belarus MAZ Sport Auto team trucks. While Vitaly Muryliou decided not to take the start following engine troubles, one after the other, Vishneuski (engine), Vasilievskiy (stuck) and Viazovich (turbo) successively accumulated difficulties…

Back to Astrakhan for the second part of the marathon stage (475,38 km, of which 332 are special stage). Two thirds of the special are very fast before the profile becomes less rolling than the previous day towards the end of the special. On the programme: demanding driving and plenty of navigation, with the slightest error by co-driver potentially costing big time in the final overall results. The first authorised assistance ‘oasis’ will be situated two thirds of the way into the special at CP2 km 215,52. Though it won’t be a leisurely break as the clock will still be turning. Care will also need to be taken over the 5 km section of off-piste through the vegetation (km 241,56) which could catch out more than one…

On arriving at Elista, at the end of the first part of the 2018 SILK WAY RALLY marathon stage competitors could take a few strategy lessons from the ancient game of chess. Led between 1993 and 2010 by Kirsan Ilioumjinov, the Republic of Kalmoukie is heavily influenced by the leaders passion for chess. Ilioumjinov, also president of the international chess federation (FIDE), turned Elista into the world chess capital after having built the City Chess complex, entirely dedicated to the game. In addition there is a chess museum in which is housed the personal collection of one of the great players from the Soviet era, Mikhaïl Tal. And if that wasn’t enough, chess is also on the school programme throughout the Republic of Kalmoukie !

Sponsor since the first edition of the Silk Way Rally in 2009, the Russian company PJSC Gazprom is engaged on the event as a main partner for a minimum of two years.

Because of their unique design and capabilities, TOYOTA all-terrain vehicles have proved their extraordinary resistance during the various reconnaissance and on the rally. TOYOTA, which symbolizes technical and technological confidence, has been the official supplier of Silk Way Rally cars since 2016, accompanying the rally on both road and track.

SIBUR is the technical partner for innovative materials and is sponsoring a special award “For impressive vehicle reliability and excellent skills demonstrated under extreme circumstances”.Under its support several environmental activities will be carried out during the rally in order to promote a culture of environment protection.

Gazprom will be filling up the Silk Way Rally’s vehicles along the route with the company’s newly launched branded diesel fuel, Diesel Opti.