Nani Roma (MINI John Cooper Works n°104) has won the 5th stage and in doing so has taken his first ever victory on the SILK WAY RALLY. The Spanish driver led home his team mate Yazeed Al Rajhi (MINI John Cooper Works n°103) who shores up his overall lead over his rivals who struggled on the tracks leading up the banks of the Volga. In the truck class one Kamaz can hide another. Following a 6 penality given to the day’s winner Andrei Karginov (Kamaz-Master n°309) for speeding in a control zone, Anton Shibalov wins his first stage of this 2018 edition. As a result, despite the 26 minutes lost on the track due to mechanical problems, Dmitry Sotnikov (Kamaz-Master n°300), just manages to hold on to his overall lead.

# Cara: MINIs out in front! 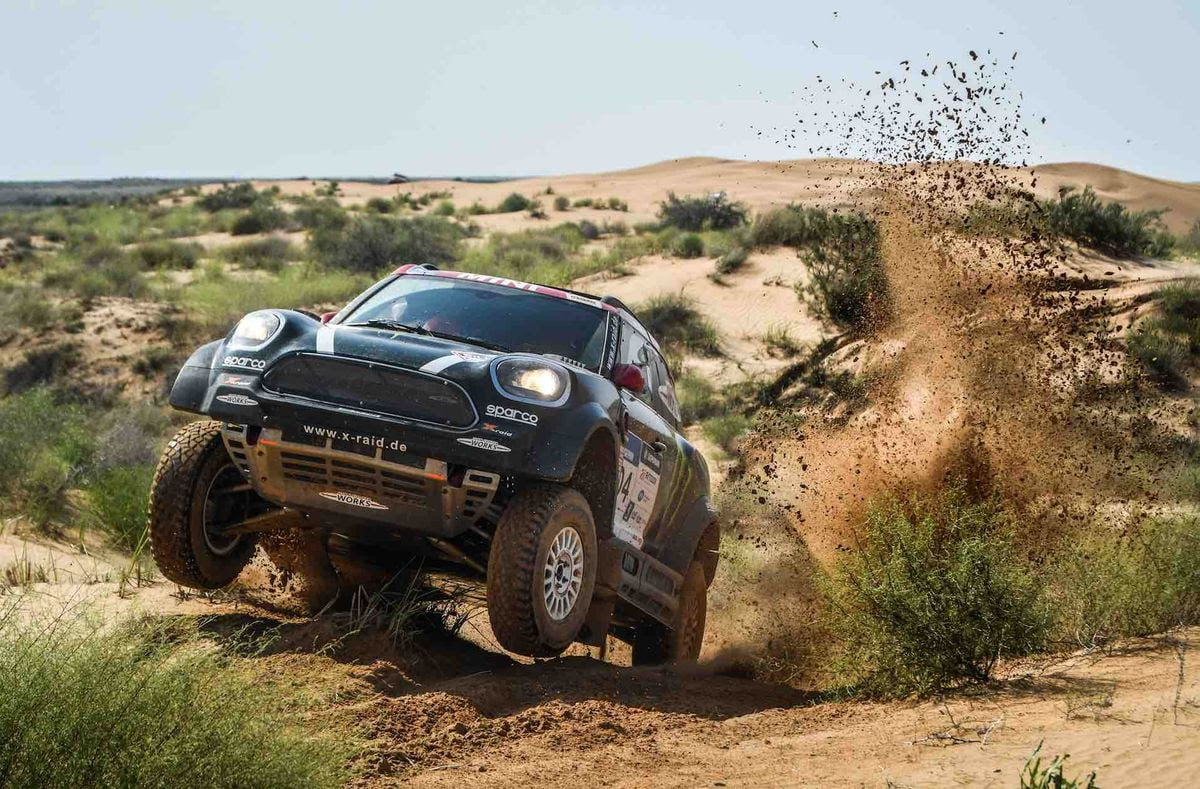 Setting off at a brisk pace this morning, the two X-Raid team MINI John Cooper Works were the main protagonists of this 5th stage to Volgograd. Yazeed Al Rajhi (n°103) and Nani Roma (n°104) pulled away from the pack to fight over the day’s laurels. Often just seconds apart, their duel finally played out in the Spaniard’s favour. After a difficult start to the rally, marked by health problems, Roma takes his first ever stage win on the SILK WAY RALLY. Backing off as the finish came into sight, Al Rajhi shores up his place as overall leader, regulating his rivals to more than one hour in the overall classifications. If you add to that the 3rd fastest time of the day (but not counted in the classifications) of the MINI All4Racing of Vladimir Vasilyev, who has joined in the race as part of the Russian championship, and you have to conclude that it was a good day for the MINIs.

For the other front runners, the track leading to Volgograd (formerly Stalingrad) brought nothing but misery. Struggling with his powerful buggy SRT over the second half of the special stage, the longest of the 2018 edition (443,78 km), Mathieu Serradori (n°108) conceded more than 30 minutes, mainly due to problems with his windscreen wipers that forced him to stop several times during the last 150 kilometres.

Starting without a rear differential this morning, Nasser Al-Attiyah (Toyota Hilux n°101) was forced to stop twice to allow it to cool down. But at just over 13 minutes behind Serradori overall, the Qatari driver still has legitimate ambitions for the 2nd place. For Harry Hunt (Peugeot 3008 DKR Maxi n°107) everything was going swimmingly and he was posting the fastest times…. until km 165 when his ‘Lion’s’ gearbox gave up the ghost. After having already lost 4 hours yesterday, the British driver has once again obliged to wait for his assistance…

One thing is certain: If she loves the sand, Anastasia Nifontova (Toyota LandCruiser n°132) doesn’t like the mud. The Russian driver gave away nearly one hour thirty minutes to her main rival, the Chinese driver Zi Yun Gang (Toyota LandCruiser n°134) who posted the best time of the day ahead of his countryman Lu Binglong (Toyota LandCruiser n°128). In doing so he becomes the new leader of the T2 category reserved for production-based vehicles. In T3 it was the Bulgarian Petar Cenkov (Quaddy Yxz n°130) who won his 2nd stage of the race to move up to just over 3 minutes behind Mariia Opariina (Maverick X3 n°115), who manages to hold onto the SSV class lead. 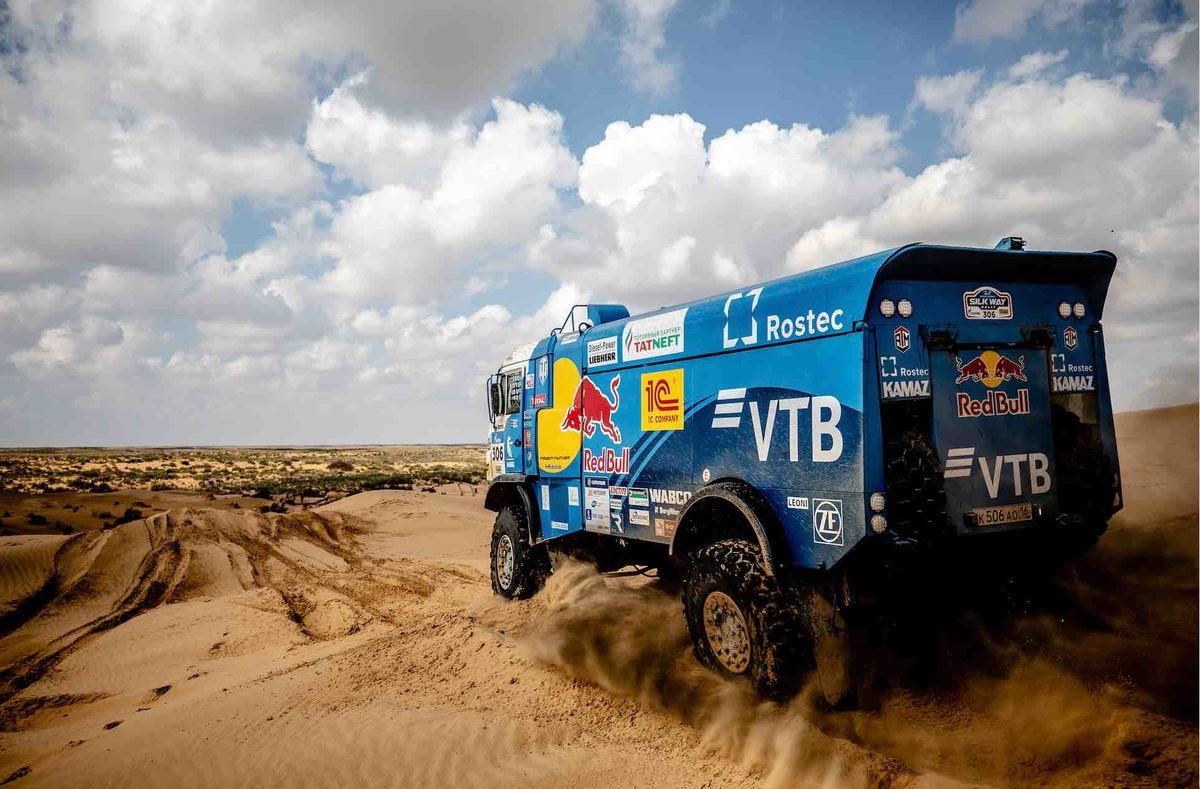 Plenty of drama in the truck class where, despite losing 26 minutes right at the beginning of the stage changing a turbo hose, Dmitry Sotnikov (Kamaz-Master n°300) just managed to hold on to his overall lead by… 44 seconds! Credited with the best time at the finish line, his team mate Andrei Karginov (Kamaz-Master n°309) thought he’d taken the overall lead. But a 6  minute penalty for speeding in a control zone put paid to his hopes.

With second on the day, Eduard Nikolaev (Kamaz-Master n°301) also receiving a one-minute penalty for the same reasons, it was finally the young and talented water carrier for the blue armada, Anton Shibalov (Kamaz-Master n°306), who took the day’s stages.

All of which promises a hi-tension last two stages as they battle it out for final honours – a three-way sprint between Sotnikov, Karginov (+0:44) and Airat Mardeev (+11:44). Add into that mix the Renault Sherpa of Maarten Van Den Brink, held back today by suspension woes, but still chasing after a stage victory and you have all the makings of a fantastic finale in the big boys’ class.

The longest stage of the 2018 SILK WAY RALLY, the 6th leg from Volgograd to Lipetsk (766,78 km) risks being particular tough on both the drivers and their vehicles. After a fast start, the first crossing of small dunes could cause problems for some, particularly if high temperatures make the sand soft. Navigation will once again be omnipresent with numerous changes of track that will demand careful reading of trip meters and compass headings.

There were six of them at the start of this 2018 SILK WAY RALLY and they are firm favourites to win the truck class. But look at them a bit more closely and you will notice that not all the Kamaz are the same. While Dmitry Sotnikov, Airat Mardeev and Andrey Karginov are driving the current version to come out of the Naberezhnye Chelny workshop, Eduard Nikolaev is driving an evolution, in ‘Kapotnik format’, matt black and with a prominent front bonnet and fitted with an automatic gearbox. Different in design from the other Kamaz and decorated in the colours of GAZPROM and VTB, the n°311 driven by Sergey Kupriyanov is powered by the latest evolution of the hybrid motor running on a mixture of gas (30%) and diesel (70%). Successfully developed over several years, this hybrid Kamaz last month took its first victory in Kazakhstan. A source of great pride for its driver, whose ‘day job’ is as press attaché to the president of the board of directors of Gazprom.

Sponsor since the first edition of the Silk Way Rally in 2009, the Russian company PJSC Gazprom is engaged on the event as a main partner for a minimum of two years.

Because of their unique design and capabilities, TOYOTA all-terrain vehicles have proved their extraordinary resistance during the various reconnaissance and on the rally. TOYOTA, which symbolizes technical and technological confidence, has been the official supplier of Silk Way Rally cars since 2016, accompanying the rally on both road and track.

SIBUR is the technical partner for innovative materials and is sponsoring a special award “For impressive vehicle reliability and excellent skills demonstrated under extreme circumstances”.Under its support several environmental activities will be carried out during the rally in order to promote a culture of environment protection.

Gazprom will be filling up the Silk Way Rally’s vehicles along the route with the company’s newly launched branded diesel fuel, Diesel Opti.