Silk Way Rally; Special Stage Nine: What was mesmerizing about the modest sized dunes dominating challenges in the 8th leg, pales in comparison to the spectacular mountain-sized monuments of khaki colored granules just outside of Alashan. Though this was near the site of the previous day’s ASS, we didn’t have the chance to absorb the full magnitude of this place – massive shadows in the horizon opening up to China’s own Sahara. To never feast your eyes on such a sight is to do them, and yourself, a disservice. Like setting foot into a Dali painting, the mountains create bizarre illusions, appearing Martian to a novice. Peaks look within reach, yet the true distance is incalculable without a couple bottles of a water and a Fitbit. The cliffs are two faced, completely darkened by shadow on one side, brilliantly white on the other. A rollercoaster building anticipation as one ascends and releasing pure exhilaration all the way down, a ride with which one American feels right at home.

Heroes come in all shapes and sizes, and today, at least one of them is “Short.” It’s here in China where retired Motocross-star-turned-Rally-Raid-pro won his first stage in the World Class championship. (And it’s about time.) A truly underrated rally racer, Andrew Short #29 (Rockstar Energy Husqvarna) understands hill climbs, whoops, berms, getting loose and going airborne like their something he tackled for, say, two decades… It’s no wonder he looked so at ease throughout this multifaceted special. Stage Nine wasn’t just another highspeed road race or Enduro like the former seven – to exclude SS8 of course. Shorty (as he’s known ‘round town) knew he’d made good time, feeling confident yet again, through the dunes which were quite well suited for his style. But instead of his usual fluid nature, being smartly conservative when outside his comfort zone, he pushed himself to the top of his limits, taking more risks than usual in the fast parts to ultimately win the day’s crown. It’s still too soon for the United States to bust out in unison Queen’s “We Are the Champions,” but if Shorty’s feat was a representation, at all, of his country, we have much to be proud of. 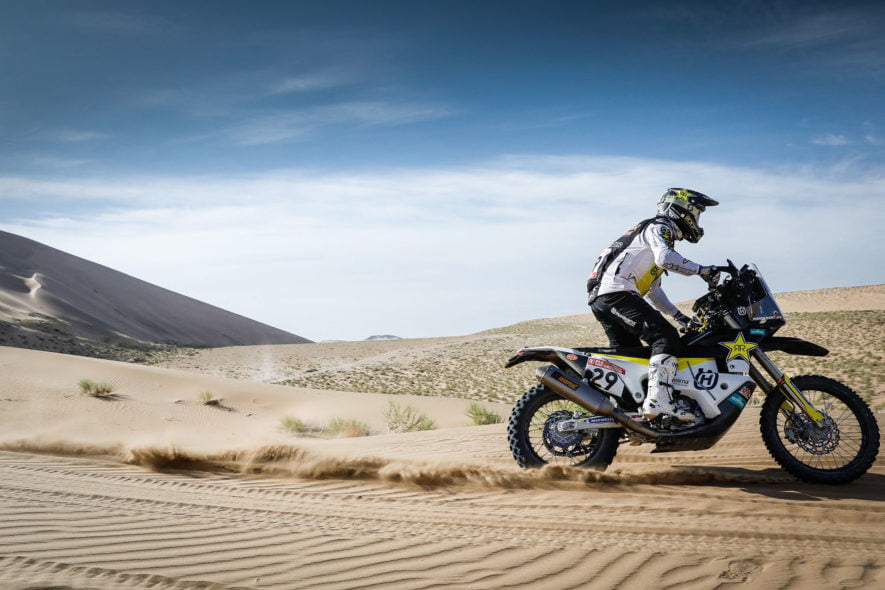 “Today it was more like motocross – not those fast roads. I was able to move on the bike, I had a good start position, so overall a really good day for me. Nice to win my first FIM special even if it has taken me a lot longer than I thought to get to this point. And I’ve still got a long way to go. These guys have been doing it so long. They have so much knowledge and expertise, and also speed. There’s some truth in the fact that this being a level playing field helps (first time for bikes on the Silk Way Rally), but for the most part it’s just because they’re fast.” – Andrew Short #29, Rockstar Energy Husqvarna 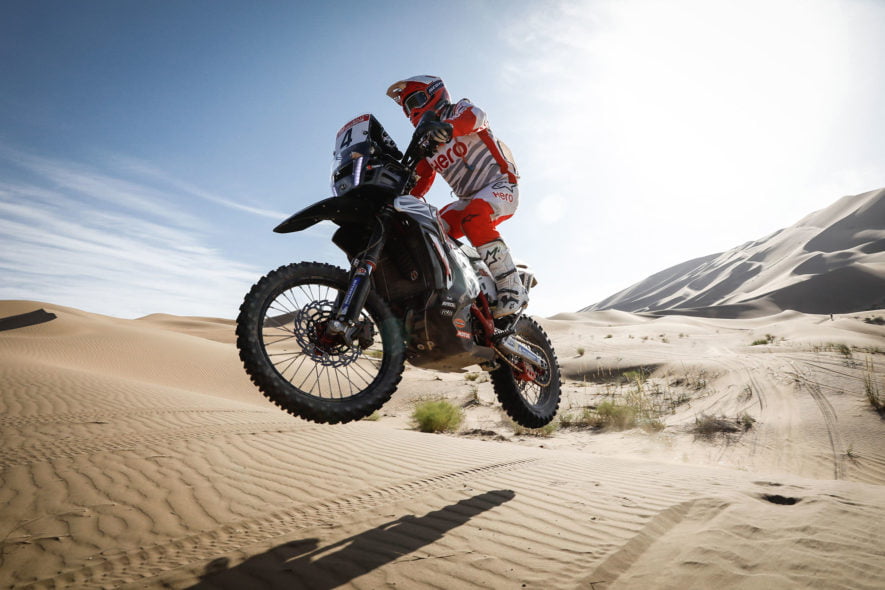 HERO Motosports’ Paolo Goncalves #4 performed well in the sand sierra as well, sliding into Second place at the finish. Quite unfortunate he was taken out of contention for engine troubles earlier in the event. Frenchman Adrien van Beveren #10 of Yamaha Rally Team too boxed his way through the penultimate stage with the third seed as his prize. At only a minute-forty-five behind the winner, he’s in clear shot of the final podium in Dunhuang. Fourth position in the 9th leg, #6 Sam Sunderland (Red Bull KTM) still has plenty of space between him and his adversaries in the General Classification. If all goes according to plan, we’ll see the Brit-born factory rider at the top of the pyramid summing up the 2019 Silk Way Rally. But then who will fill those next two coveted spots – Short, Beveren, Benavides K. or L.? It’s such an airtight competition right now, predictions would be a fool’s errand. 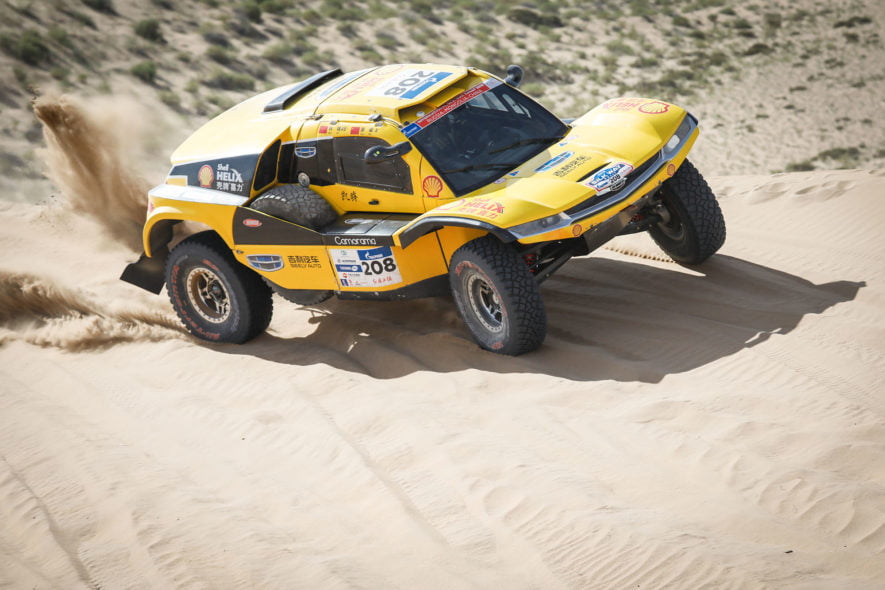 In the Car class, a victor appears to have already been chosen. And although, again, we could blame fate (or recklessness) for any casualties among the elite, #201 Nasser Al-Attiya and Mathieu Baumel (Toyota Gazoo) are much too clever to endanger their massive advantage by pushing it. Any troubles they might encounter would be at the hands of destiny.Some exhaustive driving by with pinpoint accurate navigating, the team managed a tough stage without any hiccups, securing their 8th consecutive triumph. Wei Han and Min Liao #208 (Geely Auto) came out of the beach day in Second, only to be starting the final stage at a tense position. Whereas Overdrive Racing, Eric Van Look and Sebastien Delaunay #205, will be cozy in third and gunning for their Chinese opponents. 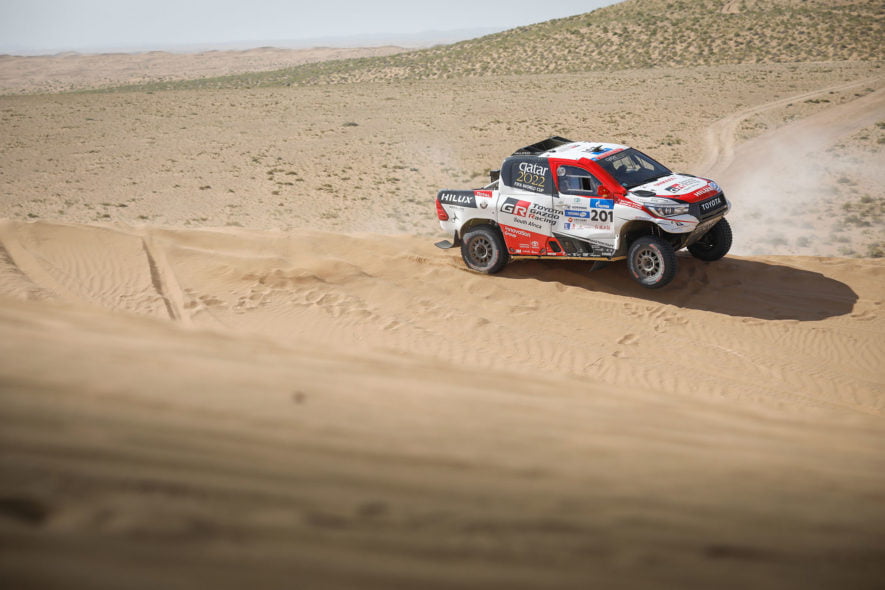 “It was a very difficult stage today. I have raced many Dakar’s, but I have never known such an exhausting special. Like yesterday it was very interesting, but the body, already tired, I was really tested today. There’s only one stage left now to finish this Silk Way Rally in style.” – Nasser Al-Attiya #201, Toyota Gazoo Racing SA

It somehow feels right to have a KAMAZ-Master truck present on the podium at this Russian run event. But that’s not to say the team this year won’t have earned it. With the Belarusian hopefuls, vessel #304 MAZ-SportAuto piloted by Siarhey Viazovich, officially out of the race after tumbling down a dune, KAMAZ is pushing to have all three steps filled with their machines – and so far, the effort is paying off. Anton Shibalov, Dmitrii Nikitin and Ivan Tatarinov are sitting on the top driving camion #303; Andrey Karginov, Andrey Mokeev and Ivan Malkov in the #300 have the second landing on lockdown; and teammates Airat Mardeev, Dmitrii Svistunov and Sergei Krenev holding the last stair behind the wheel of #302. Not to be forgotten, the US CRV team, #310 captained byAviv Kadshai, Izhar Armony and Maoz Wilder, have scrapped their way to 6th in the stage and 7th overall, their greatest stats yet. Glad to see the Stars and Stripes are putting up a good fight in this cross-country battle having Short, CRV and UTV #229 (Austin Jones and Kellon Walch) pulling solid results at the rally! 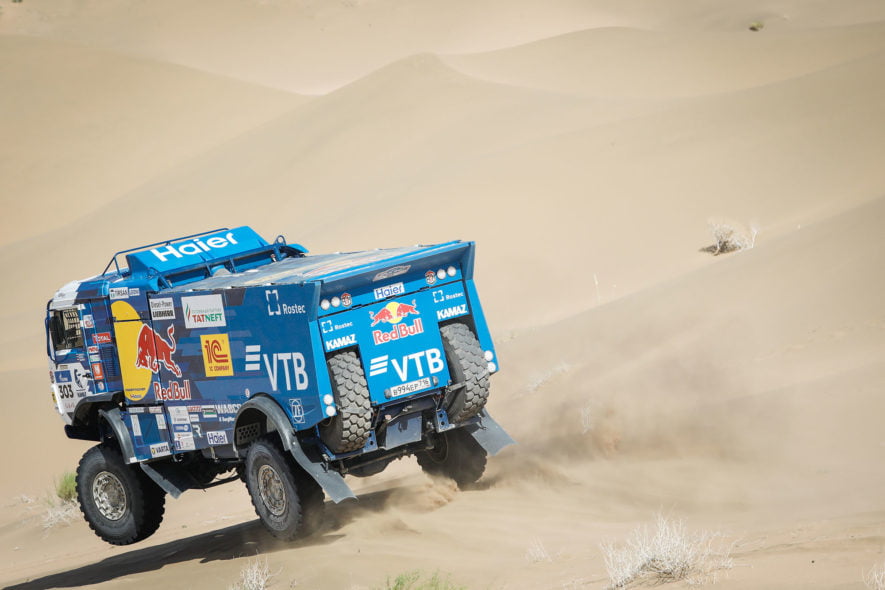 “We drove this special at a good pace, but I never had the impression of taking any risks. The goal was to drive carefully and get over the obstacles as efficiently as possible. Something we clearly achieved, as the first cars didn’t take much time off us.” – Anton Shibalov #303, KAMAZ-Master Team

Will the standings remain steadfast as this 2019 iteration comes to an end? Or will the fickle nature of Rally Raid alter the outcome of a seemingly certain finale?

Ø By installing their bivouac at Jiayuguan, for this last bivouac before the finish, the Silk Way Rally almost touches the western extremity of the Great Wall of China, with its ‘Fort of the Fertile Valley.’ The Great Wall has been measured several times. In 2012 the Chinese authorities announced an official length of 21.196,18 meters, equivalent to 5 times the width of the USA from east to west or, if you prefer, 175,000 football fields in a line! It should be noted however that this figure takes into account all the different walls, sometimes superimposed at certain points, that have been built over the centuries by different dynasties. In reality, it is reckoned that the 8th Wonder of the World measures more or less 5.000 kilometers. Which tallies nicely with the wall’s alternative name, ‘the wall 10,000 li long’. A ‘li’ being the equivalent of 500 meters. [Excerpt courtesy of Silk Way Rally]

Ø Tomorrow: Stage 10 – JIAYUGUAN to DUNHUANG is the last stage, starting in the foothills and becoming harder and more technical with every new kilometer. Going through the canyons, across plateaus, along twisting roads and dry riverbeds. The last kilometers are set along a smooth and fast ground road, which will define the rally champion.