Russia’s Remote Forest Sunk Its Teeth into these Unsuspecting Racers

Special Stage One was a tremendous send off for the rally, offering action right out the gate. At only 51 kilometers long, one could reference the notion that things with the most value often come in small packages. Be it true, then the pilots and co-drivers were in for one impactful race. Scattered showers throughout the night and early dawn mutated the diverse landscape into nature’s version of a prolonged Slip n’ Slide. Cool temps kept the ground wet and the stones and gravel in many sections lubricious. While the density of sharp objects caused an endless stream of tire troubles. Many teams derailed by a simple pinch-flat. The real disaster happened, though, for South Racing CAN-AM team #229 co-captained by Americans Austin Jones and Kellon Walch. Onboard footage from #233 Henard Racing team show them approaching as Jones pulls into the grass and almost immediately their UTV is sent into a spiral. 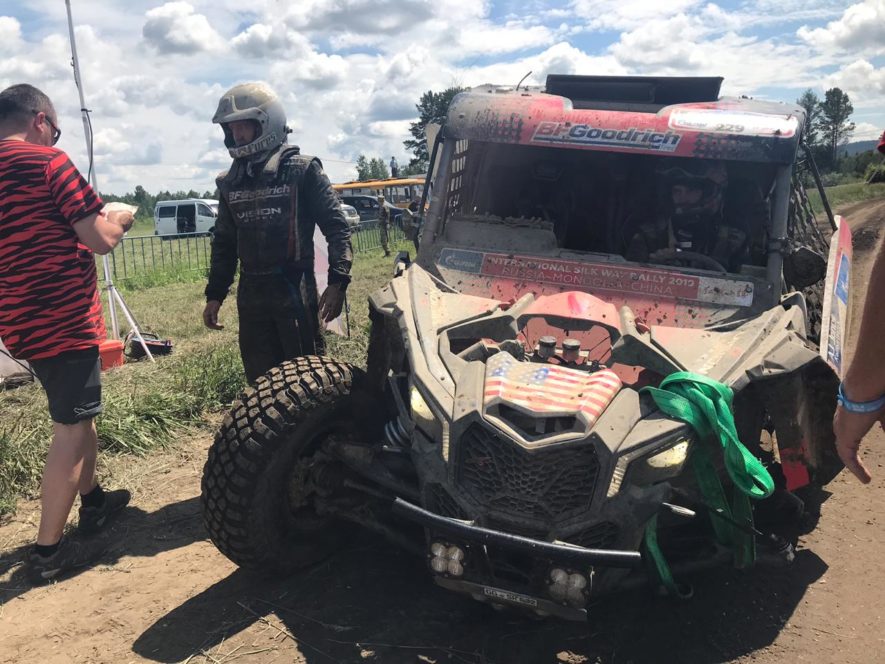 Video of the crash from #233 Henard Racing Team:

Jones commenting their big crash: “They wouldn’t get out of the way for about probably four kilometers. So, I got frustrated from hanging out behind them. We tried to go around on the side through a field of weeds that were about waist high. We were going through there, made the pass on them and when we were reentering the racecourse a…massive tree stump was in the middle of the racecourse. We hit that, went for a little ride, and Kellon Walch and I fixed it. We got as much as we could back onto the car [because] we knew we had to finish the stage, so, that’s exactly what we did, and we’re here now.”

It wasn’t all bad, however. As this was the first chance to see how the bikes and quads would fair in terrain so far removed from the desert and dunes many of these Dakar vets are used to, it was interesting to find the Argentinian Benavidas brothers proving to be steadfast. Kevin #7 of the Monster Energy Honda team and Luciano #77 of Red Bull KTM taking the number One and Two spots – separated by a mere 36 seconds. Yamaha Rally team also found their way to the day’s proverbial podium, with Frenchman Xavier de Soultrait #16 sliding into Third just moments later. Alternately, Quad results concluded with more of a landslide, having the Polish rider #103 Arkadiusz Lindner crossing the finish 4 minutes-37 ahead of Russian, #102 Aleksandr Maksimov. Firsthand accounts from the sidelines said that of all the open-air machines, the Quads were pushing it the hardest, ripping into every new turn of the stage. 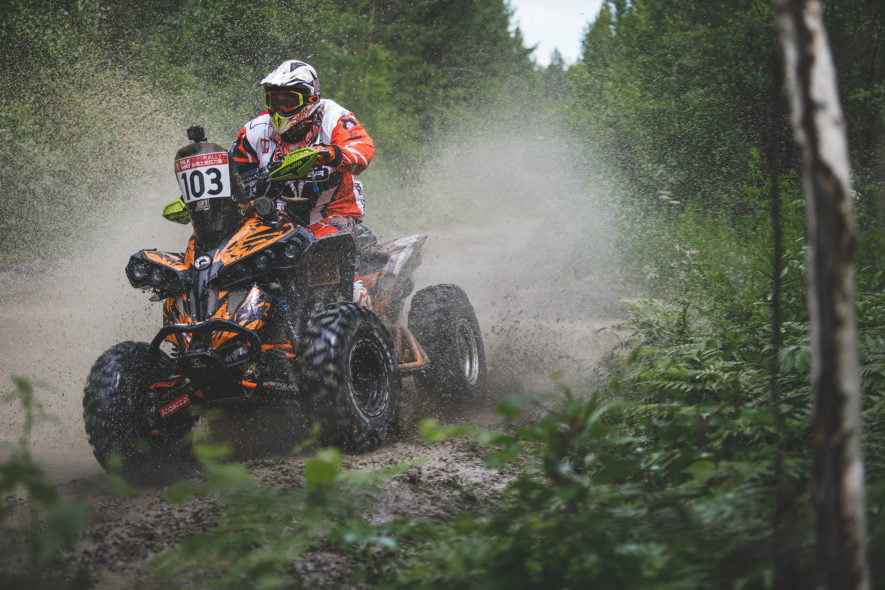 “I feel really good. It was a short stage but really fun to ride. Sometimes fast. Sometimes more like an enduro, and I think this is why I felt so good on the bike. And then with my brother finishing first, this is good for the family – makes me feel so proud. But this is just the start of the race. Tomorrow will be longer and more complicated.” – Luciano Benavidas #77, RED BULL KTM FACTORY RACING

Three-time Dakar champion Nasser Al-Attiyah promised himself one thing this year: to win. And if SS1 proves anything, it’s that Al-Attiyah and his co-driver Matthieu Baumel #201 are staying faithful to their word, nabbing the victory from last year’s winner, and Toyota Gazoo Racing teammate, Yazeed Al Rajhi #200 who, despite a three minute lead at the start, limped a bit along the special from a slow puncture. But we’re still nearly 5,000 kilometers from Dunhuang, China so there won’t be any popping of champagne just yet. Each car will need to take things a stage at a time, and as one should, keep an eye out for the underdog. Of the Side-by-Sides, Russian native #253 Tatiana Sycheva with co-driver Aleksandr Alekseev of the Xesha Rally Team also found opportunity when Can-Am Maverick’s buggy suffered some electrical problems – taking from them the premiere seed in their class. 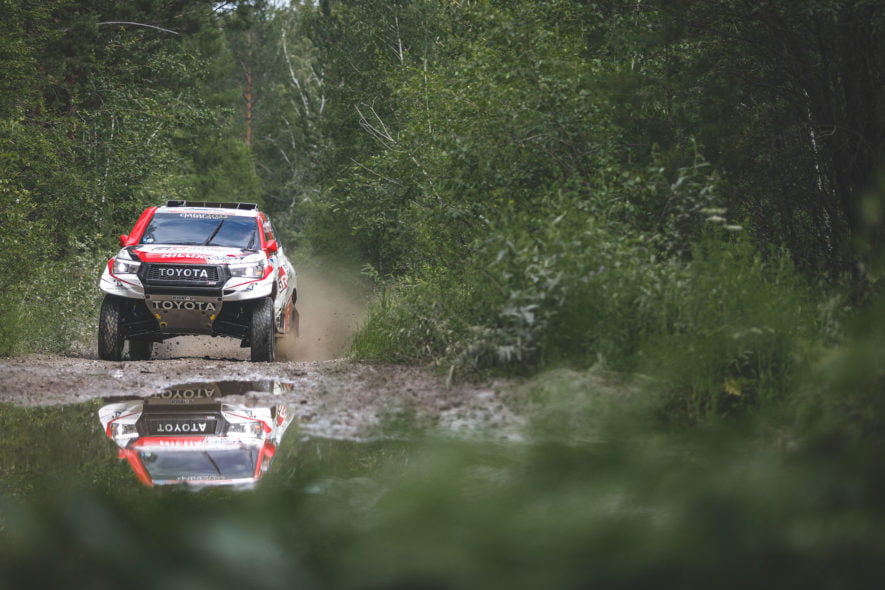 Despite Jones’ and Walch’s setbacks, the two remaining USA reps managed to break into the Top Ten. Andrew Short #29, (Rockstar Energy Husqvarna Factory Racing) secured 9th in bikes, while Izhar Armony managed to sneak into the 10th position in the #310 CRV truck. But the real fight among the camas was between pilots Siarhei Viazovich of #304 for MAZ-SportAuto and Anton Shibalov of #303 for the KAMAZ-Master team. Viazovich’s “long nose” vessel skidded past his adversary – who was reportedly weighed down with parts for his team – with 56 seconds to spare. A seemingly common occurrence this race, to find an opening, recognize a weakness, and seize it. But when all the competitors are equally measured, when circumstances are flawless, who will really lead the pack? Even then, will fate – and Russia (and subsequently Mongolia and China) – let them own their place for long?

You don’t see it coming. There could be hours spent struggling past any number of obstacles before it strikes. Because what you do know is that you don’t know – like when the moment of disaster will occur. Why? How? Where? But when it does… When the Siberian “Taiga” forest, much like its most infamous endangered predator, decides to pounce, you’ll feel it. The pinch-flat and punctures. The tree stumps. All this while navigating slick wet rocky sections, massive mud puddles and dry riverbeds which have transformed back into rivers. An attack by Mother Russia can kill the race, or your willpower, if not you yourself. So far, you’ve survived. Now… Onto the next one.

Photos and story by WESTx1000