Tuesday, July 8th, 2019 – Baikalsk to Ulan Ude: More than double the previous special, Stage Two was bittersweet. The sun was out, the earth a little dryer and the vistas were varied and beautiful. Even the day’s trials were fulfilling, albeit difficult. It seems racers really enjoy such a demanding day (at least when they don’t DNF).

But this race was the send-off. A goodbye to lush forests, Lake Baikal and Southern Siberia because on Day 4 they’ll be chasing each other across the open grasslands in Mongolia. To say Russia had left its mark on the event, and everyone involved, would be an understatement. And just as SS1 was a slick, stony, arduous endeavor, SS2 bested its predecessor with a constant stream of obstacles: baby head and bed rock, static and dynamic water crossings, mountain passes, bridges and fast navigation all at the top end of race-pace. Stuff rally dreams are made of, and a far cry from what many competitors are used to with the World Championship and Dakar. 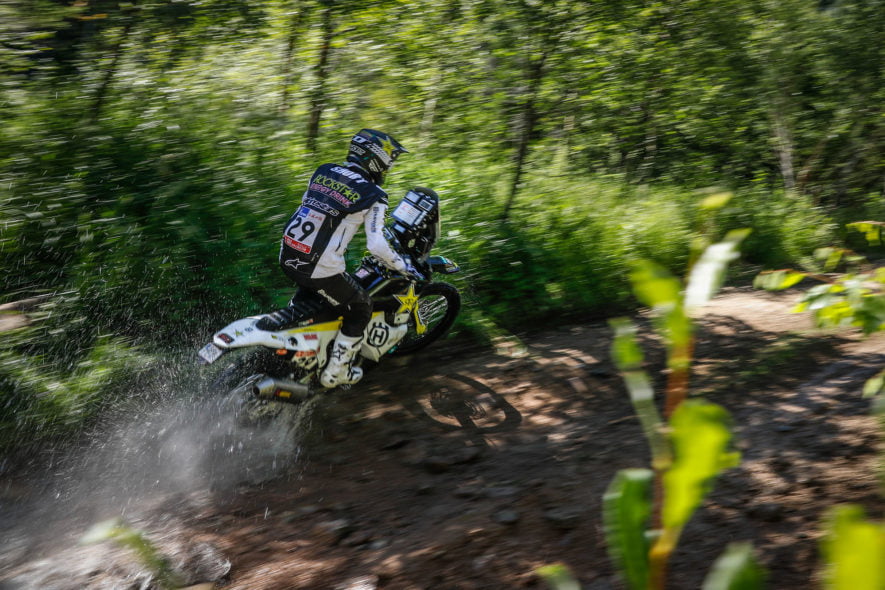 “[It was] a fast Stage Two… Big water crossings, rocks and surprises all day while going really fast. I was scared all day… [It’s] mentally draining when you are focused for that long. Leaving Russia tomorrow and headed to Mongolia.” – Andrew Short #29, Rockstar Energy Husqvarna Factory Racing

American Andrew Short managed to move forward to 8th position both in stage results and the General Classification. But that’s we know him for – consistently climbing the ladder while others ping-pong back and forth up and down the rungs. Steadiness is a quality often overlooked as a key to victory, but with all rally’s unexpected twists and turns, it’s one of the most valuable. Expectedly, the Top Ten was a mixed bag, with Sam Sunderland #6 (RED BULL KTM Factory Racing) pulling the stage win while yesterday’s victor, Monster Energy Honda rider Kevin Benavidas #7 found a comfortable spot a few steps back in 4th. Sunderland had in fact intended to finish a little further down the pack in preparation for the following stage which would give him nearly 700 kilometers to make up time and close gaps, though it’s tough to imagine he’s displeased. Hero Motosports team, however, had double the reason to celebrate as two of their athletes, Paolo Goncalves #4 and Oriol Mena Valdearcos #25, moved up significantly to the 2nd and 3rd seeds – a product, they suggested, of an even playing field since no one racing in this class had ever ridden these tracks before. But with the good comes the bad, and after a series of damaging events, Yamaha Rally Team’s Xavier de Soultrait #16 had to drop out of the competition, while his teammate #10 Adrien Van Beveren fell into 9th. 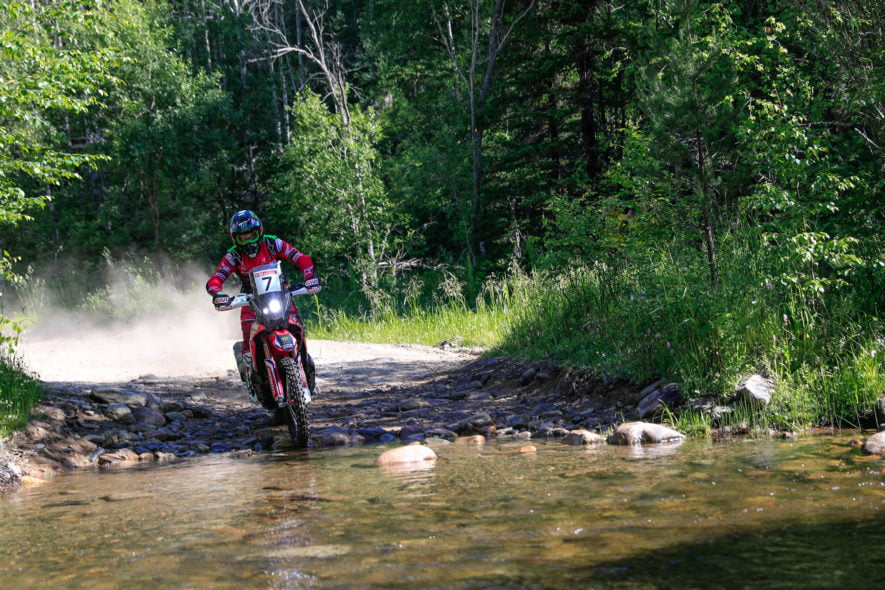 Nasser Al-Attiyah and Matthieu Baumel #201 are on a roll, giving Toyota Gazoo another triumph, but will they keep up the pace? There are so many stages remaining, and the terrain is about to change drastically, so we’ll see if their opponents will rise to the occasion and keep them out of the Winner’s Circle. Alternately, last year’s champion #200 Yazeed Al Rajhi and Dirk Von Zitzewitz suffered major engine problems at kilometer 106 not long after they took the lead, knocking them out entirely. While the other contenders, Eric Von Loon and Sebastien Delaunay #205 of Overdrive Racing were forced to repair their transmission on the track, losing about three hours in the process. This allowed the UTVs to really become a threat, and we could be seeing quite a few in top spots after the wide-open stages in Mongolia.

“Today’s stage was very complicated. A lot of stones and a lot of water. We spent a lot of time in the forest tracks. In spite of a puncture we did a good job. For my part I am satisfied. We are 14 minutes ahead overall and we should be able to control a little the buggies who are coming into terrain more suited to them.” – Nasser Al-Attiyah #200, Toyota Gazoo Racing SA

We no longer see the US CRV team in the Top Ten, but Izhar Armony #310 felt they managed the demanding course well and plan to turn around their luck in the following days. Number 304, Maz-SportAuto drivers Siarhei Viazovich, Anton Zaparoshchanka and Andrei Zhyhulun have been doing well to overcome Siberia’s complexities, besting their rivals in the “Heavy Weight” category once again. But this wasn’t without a fight, and the monstrous KAMAZ-Master team isn’t backing down any time soon. If the roads were tough for the cars, bikes and quads, one can only imagine the struggle these trucks endured in the hopes of outdoing one and another. And as the pathways clear and the speeds are kicked up to “Alarming,” the big boys really have a chance to shine. Let’s just see who’ll twinkle the brightest in the Gobi.

“All the stones made this a very difficult special stage to get through. We picked up a puncture and lost time replacing the wheel. In general, we drove well, but the puncture disrupted our rhythm. I don’t remember how many times we arrived behind (Siarhei) Viazovich and beeped to pass. Each time he says he didn’t hear the signal. This left us driving in the dust.” – Anton Shibalov #303, KAMAZ-Master team

Saying farewell to a country so full of diversity – its landscape, people, cultures – will be a hard pill to swallow. Because it’s already given the participants so much in experience and challenge and compassion. But as is the nature of rally, no matter how good a place is, you must concede to pack up and move on to the next location…start a new day. So, “see ya later, Siberia,” and “Hello to the land of the Nomads.” 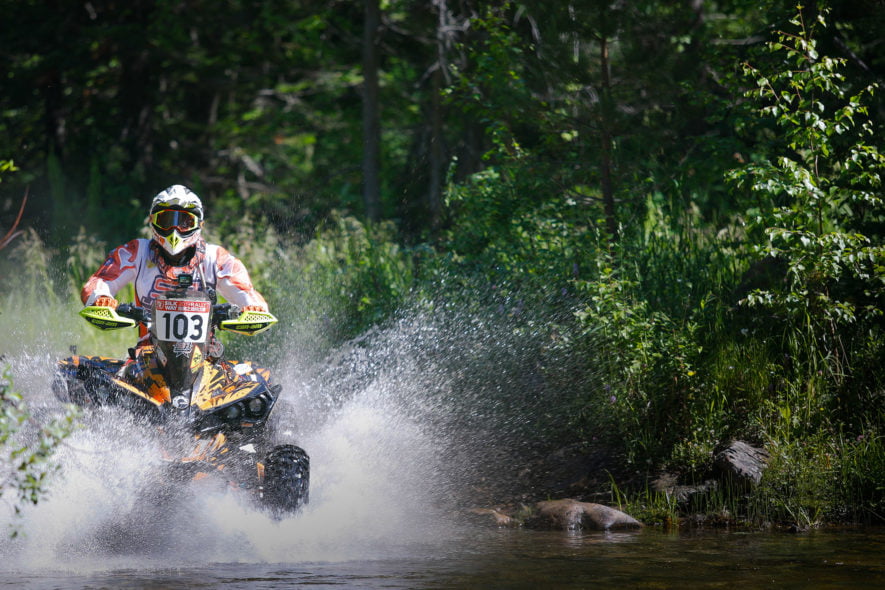 Ø At the station in Ulan-Ude, not everybody is on the Trans-Siberian. In the Republic of Buryatia, the world’s longest railway offers two alternatives. Either you continue the 9,298-kilometer route for the seven days between Moscow and Vladivostok, or you turn off on the Trans-Mongolian which heads to Pekin via Mongolia and Ulaanbaatar.

Ø For Day 4, the event crosses into Mongolia during a long 691.35-kilometer stage where racers will face altitudes of up to 1,000 meters before the finish. First bikes leave the bivouac at 5a.m. local time and begin the special at noon. Cars and Trucks will be starting together.