Special Stage Three: The “Enduro” type trails are now a thing of the past, and the mobile world of the Silk Way Rally is opening up to the vast grasslands in the Mongolian-Manchurian Steppe. What makes this region so spectacular is nothing. An obvious void of established roadways, buildings or signs to sully the immaculate landscape. Hills roll freely like massive waves in the middle of the Pacific. Great herds of cows, goats, horses and sheep roam it with just as much liberty, eating their way through the smorgasbord laid at their feet to each new destination of their nomadic masters. 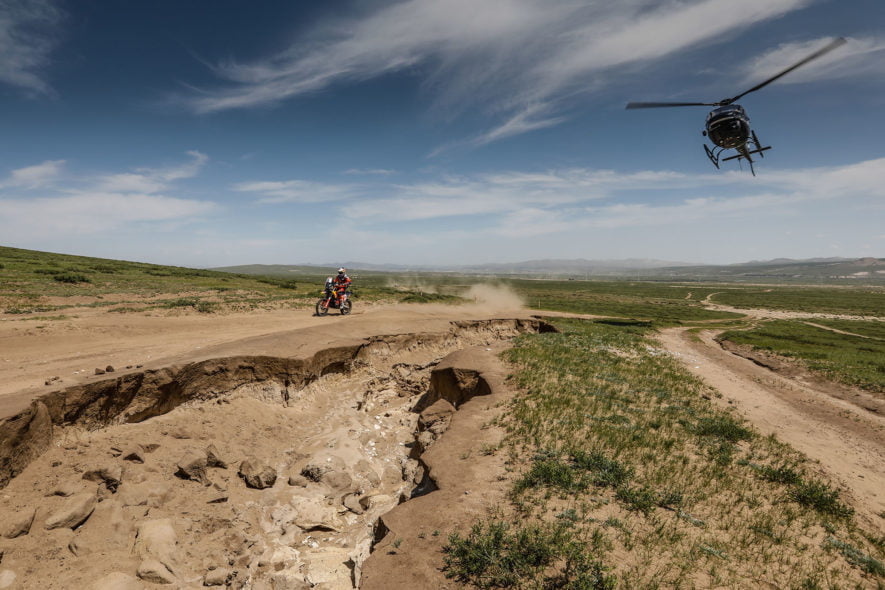 Mongolia is quite a sight to behold, though the racers may not have seen as much of it as they’d like with fast speeds pace and tricky navigation to contend with. Out the gate, the pace was blazing, and competitors were quick to take advantage of the wide, gravel & dirt avenues. Although, danger lay quietly between the cracks waiting for the distracted driver to slip into its clutches. A trap which Joan Barreda #11 (Monster Energy Honda) literally fell into at the start of the special stage. He nabbed second nonetheless, coming back stronger than HERO Motosport Rally rider Paolo Goncalves who, after disappearing into a crevasse, subsequently dropped into 10th. To add to the risk, river crossings offered equal amounts of peril however peaceful they might have seemed. And when teams started finding their rhythm, halfway through, the route turned gradually towards the sky bringing machines up to over 3,200 feet adding altitude to the reckoning. 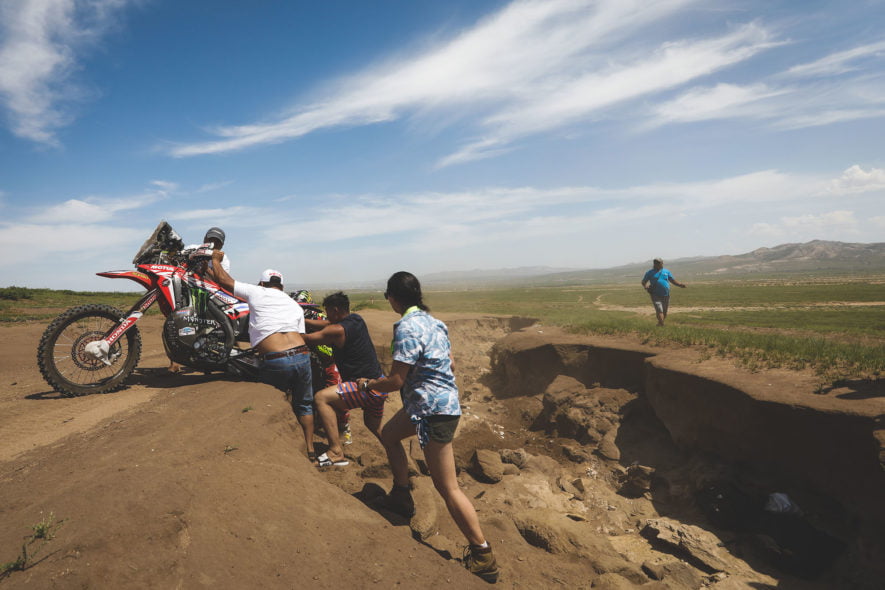 By roughly kilometer 150, the remaining section was set on a plateau with so many pathways carved into the countryside it was a dizzying challenge to navigate. Ultimately, the premiere lineup continues to shake things up, with Kevin Benavides #7 (Monster Energy Honda) finishing yet again in First just ahead of his teammate Barreda. This performance increased lead ahead of Sam Sunderland #6 (Red Bull KTM Factory) eight seconds to 2-minutes, 54-seconds overall. Kevin’s brother, #77 Luciano Benavides (Red Bull KTM) rounded out the trio. Sunderland didn’t have long on the throne, finding himself fourth in this special, but knowing Sunderland, he’s very much still in the running! What we Americans are all waiting for, of course, is word on our man “Shorty.” Andrew Short #29 of Rockstar Energy Husqvarna managed a respectable 5th place bringing USA this much closer to the podium.

“A big contrast in terrain arriving Mongolia after the forests and lakes in Russia. Really nice to have that difference in a race. Not ideal for me to open over such a long day, but I felt pretty good. Made a little mistake and lost a couple of minutes in the middle of the special, but all in all a good stage. It’s a big one tomorrow, and I have a good starting position. The further back the better, hopefully there won’t be too much dust… I’m looking forward to it!” – Sam Sunderland #6, Red Bull KTM Factory Racing 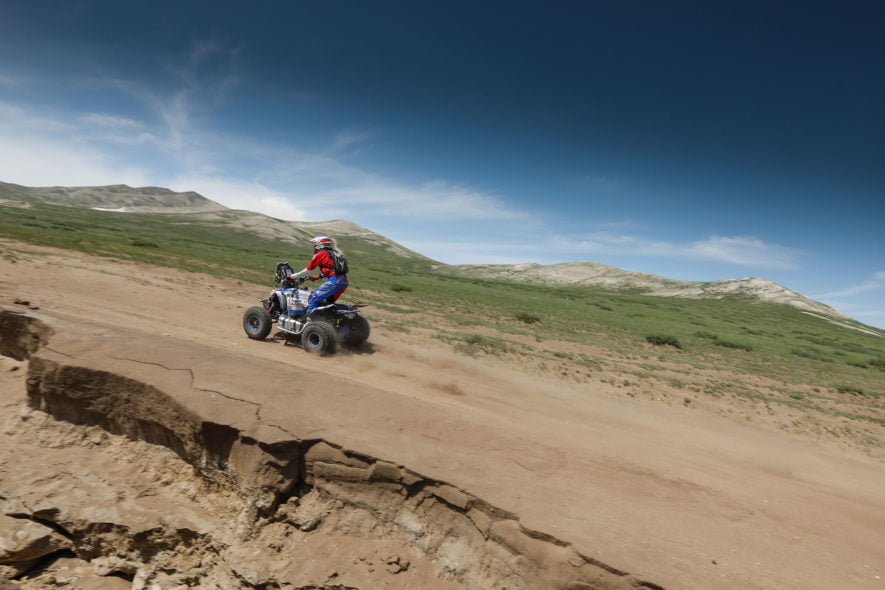 Quads too had a hell of a fight, though the results mirrored stages past, with Rafal Sonik #101 keeping a keen eye on top that step of the podium. Aleksandr Maksimov #102 hasn’t given up yet, and he does his best to stay on Sonik’s heels. Arkadiusz Lindner #103 is also still in the race, but he’ll have to make up some time if he wants to be on Sonik’s radar. In cars however, for one team, it seems like a cake walk. While the others tear at the ground to pull ever closer to three-time Dakar Champion.

With teammates Yazeed Al Rahji #200 – 2018 SWR winner – out of the race, Nasser Al-Attiya and Mathieu Baumel had one less hugeadversary to contend with today. But Al-Attiya is not foolish enough to drive at a comfortable pace, knowing there are plenty of formidable cars and UTVs on the course hot on his tail. It seems his goal is to put as much time between him and the pack as possible. Surprisingly pulling in front of the ultra-determined Side-by-Sides – racing on terrain that is far better suited for their machines – was Russian MINI JCW driver Denis Krotov and co-pilot Dmytro Tsyro #209 who concluding the stage in Second Place pushing Chinese Geely team drivers Wei Han and Min Liao #208 down to the third seed, just ahead of Kun Liu and Hongyo Pan #211 of Shanxi Yunxiang Qimosport. In the SxS class, an all-out war is being waged between Russians Sergei Kariakin and Anton Vlasiuk #220 of Can-Am Mavericks and the American team piloted by American Jones and partner Kellon Walch #229 who have made a miraculous comeback since their accident in the first special stage. 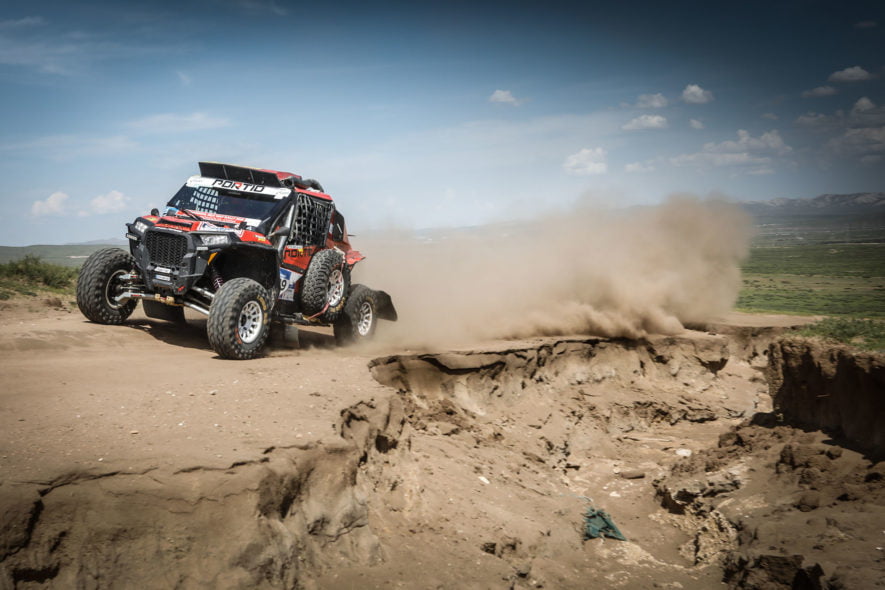 “The day was pretty good for us on a much faster special. We didn’t make the slightest navigation error and that allowed to get in the wake of Al-Attiyah. Tomorrow’s stage should also suit us, and I hop ewe can do the same result.” – Denis Krotov #209,MSK RALLY TEAM 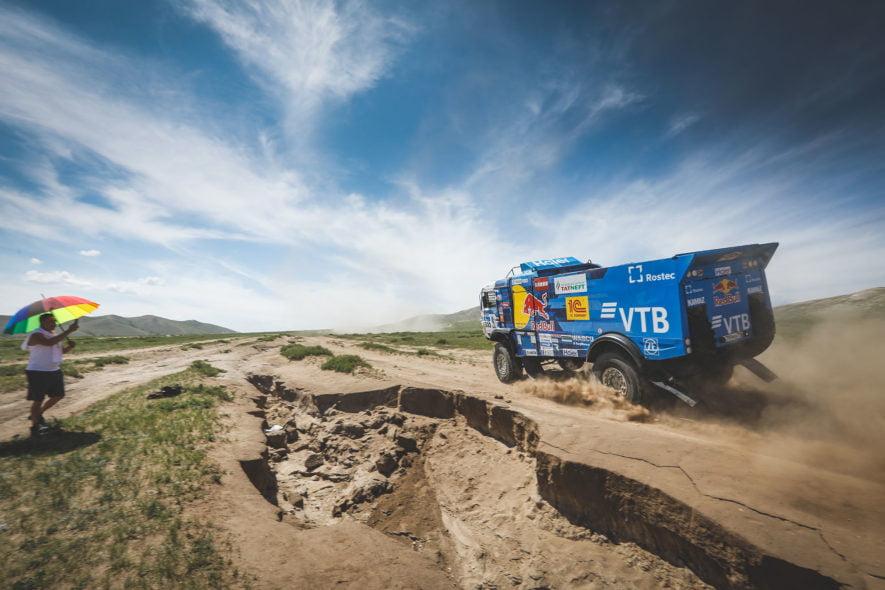 The third special stage opened-up opportunity to a new alpha of the plains, as the biggest beasts fought like mammoth bulls butting heads until one came out victorious. Winner of the first two stages, #304 MAZ-SportAuto team drivers Siarhei Viazovich, Anton Zaparoshchanka and Andrei Zhyhulun from Belarus finally succumb (for now) to the Russian KAMAZ-Master team ending the day in Third Place behind #300 Andrey Karginov, Andrey Mokeev, and Ivan Malkov (1st) and #303 Anton Shibalov, Dmitrii Nikitin and Ivan Tatarinov (2nd). But the MAZ team isn’t worried yet, as they still sit at the top of the totem pole. Whether that’ll last, we’re yet to see. Right now, the overall standings see Shibalov following Kargoinov in 2nd, with Viazovich now in 3rd. The American CRV truck #310 might have fallen back a bit in the lineup, but they still have a lot of fight left in them, and we hope to see them making strides over the second half of the Silk Way Rally!

Ø Special Stage Four marks the beginning of the Marathon stage, and most racers have been focusing more heavily on their tactic for this challenge than those of SS3. Hopefully it pays off because any mistakes will need to be remedied by the racers themselves as their mechanics must remain hands-off.

Ø Mongolians are best known for their nomadic lifestyle, as well as, their mastery of archery, horsemanship and wrestling. Mongolia, as it’s well known, has a storied past with one of their most famous countrymen, Genghis Khan, uniting their ancient tribes to conquer lands stretching from the Pacific Ocean to Eastern Europe making it, still to this day, the largest contiguous empire in history.