Part 1 of the Marathon Stage Complete, but Racers Can’t Relax Quite Yet

Special Stage Four: The dreaded “Marathon Stage.” It’s a topic which overshadows all others as it approaches. No one said a word about the trials and tribulations of Special Stage Three. All anyone could think about was the Marathon Stage. And for good reason, as any mistake made on the course during SS4 would be the sole responsibility of the pilots to repair. There’s a reason why Malle Moto competitors at rallies are regarded with such awe and curiosity. What screw has to be loose to make them want to race for upwards of two and a half weeks, with no mechanics, no team, no sleep, no sense of self-preservation? That’s Special Stage Four and Five in a nutshell. Luckily, there’s only a single night to contend with. But that fateful night, this night, could be the difference between an overall lead and an early flight home. 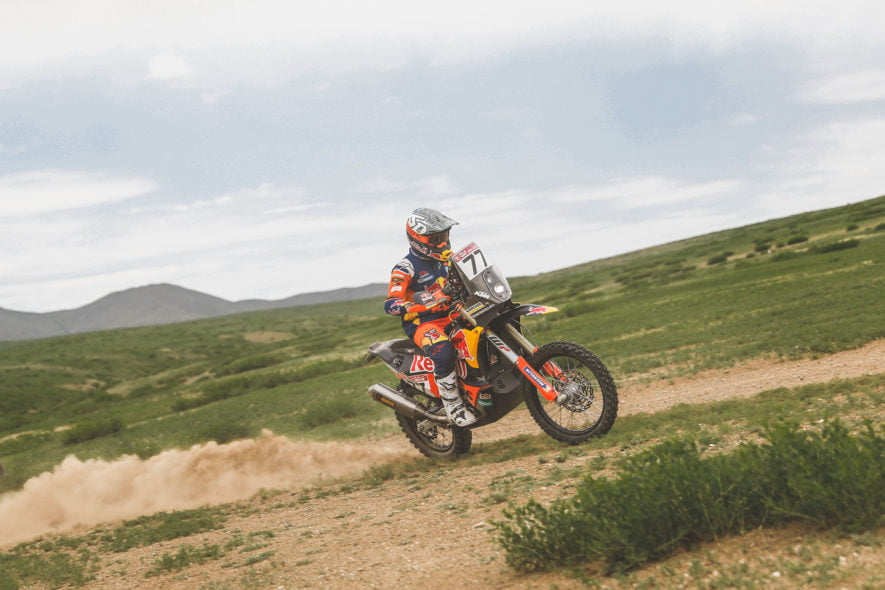 Looping from Ulaanbaatar’s brand-new, yet-to-be-opened, airport – which hosted the bivouac – and back, Part 1 had riders leapfrogging this way and that. Sam Sunderland #6 (Red Bull KTM Factory Racing) reclaimed the stage title, while teammate Luciano Benavidas #77 inched his way through the ranks as well, landing comfortably at Second. Spaniard Joan Barreda #11 (Monster Energy Honda) has been holding on to the podium, though he slipped back a spot. And American Andrew Short #29 of Rockstar Energy Husqvarna may have backed into 6th place, but with his skill at delivering respectable results, never swinging too drastically away from mid-ten, there’s a good chance he’ll pull off a remarkable finish! If the leaderboard for motorcycles is dynamic, rather fickle even, then the quads are static and relentless. It’s becoming harder to believe the quads will rearrange their order any time soon, as Rafal Sonik #101 has put over a two-minute gap between him and his adversaries. Not that Russians #102 Aleksandr Maksimov and #103 Arkadiusz Lindner aren’t putting on a great show, but they just can’t seem to catch up to the Poland native, who’s besting some of the bikes. 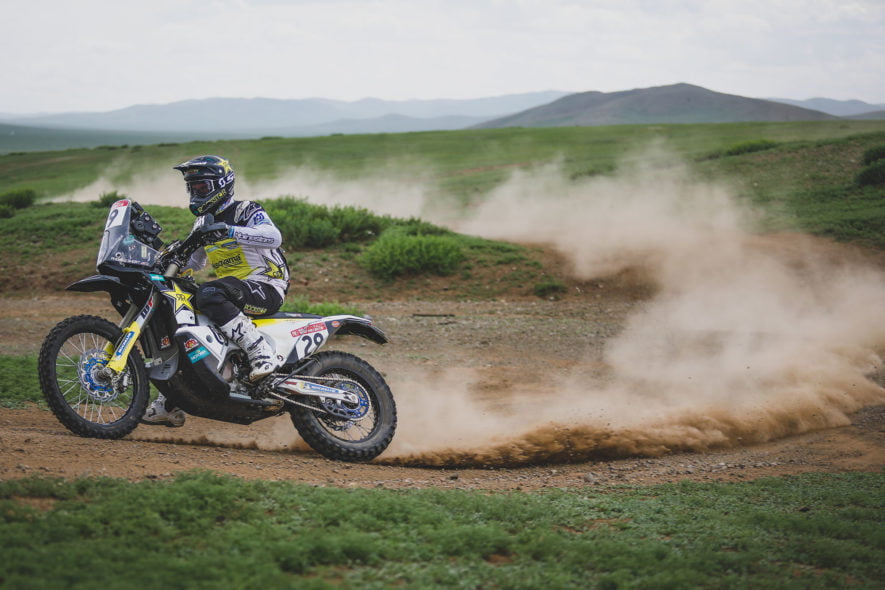 “I think it was okay. It was really fast – more than my comfort. But nice roadbook, nice terrain. Just not my specialty, you know, coming from Motocross to be going so fast like this. It’s more like road [racing], but I like the flow of the course…I didn’t see anybody all day, but Sam [Sunderland] started in front of me…I think he was really fast.” – Andrew Short, #29, Rockstar Energy Husqvarna Factory Racing

Contests between cars has been stunning. Vehicles coming out of nowhere to take premiere positions while other hopefuls drop like flies. And then, when it looks like the status has been chosen, they switch it up again. The only thing which has been truly steadfast at the 2019 Silk Way Rally is the performance by Toyota Gazoo machine manned by three-time Dakar winner Nasser Al-Attiyah and co-pilot Mathieu Baumel #201. With teammates and 2018 SWR champion #200 Yazeed Al Rajhi and partner Dirk Von Zitzewitz out of the running, they’ve been dominating with an iron fist (and a led foot). Necessary in these rolling grasslands where pilots have room to really let loose, but any simple error with navigation can cost big time – creating a domino effect of mistakes. Austin Jones and Kellon Walch #229 are looking strong mid-pack, though they have stiff competition ahead of them if they want to climb the ladder. They’re giving the United States a killer team to cheer for, all the same. Coming from out of the woodwork, however, #205 Eric Van Loon and Sebastien Delaunay (Overdrive Racing) have made a tremendous leap into the best spot behind Attiyah after several days of missing the Top Ten mark. Kun Liu and Hongyo Pan #211 (Shanxi Yunxiang Qimosport) saw opportunity in this swirl of number plates to snatch 3rd from #208 Wei Han and Min Liao (Geely Auto Shell Lubricant team) who, as a result, stumbled into to 7th. 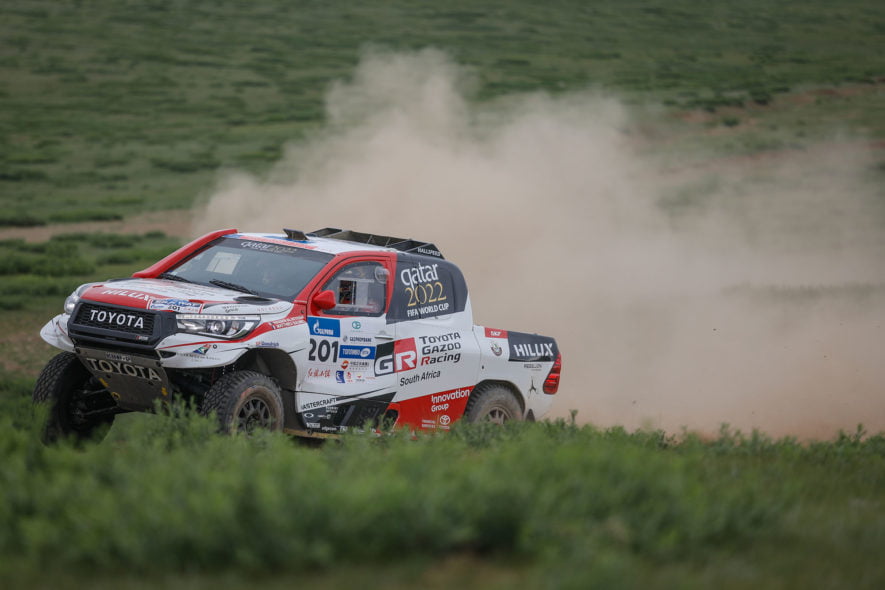 “We started behind the Kamaz today. In the dust, over the fast tracks, it was impossible to overtake. We tried just once and ended up in a hole. Luckily without damage to either us or the truck. We set off again only to see Karginov stopped at the side of the track. Then we passed Shibalov who had just punctured. Once we were out in front, we drove steadily to the finish, like a training run, because we knew we’d done the job!” – Siarhey Viazovich #304, MAZ-SportAuto 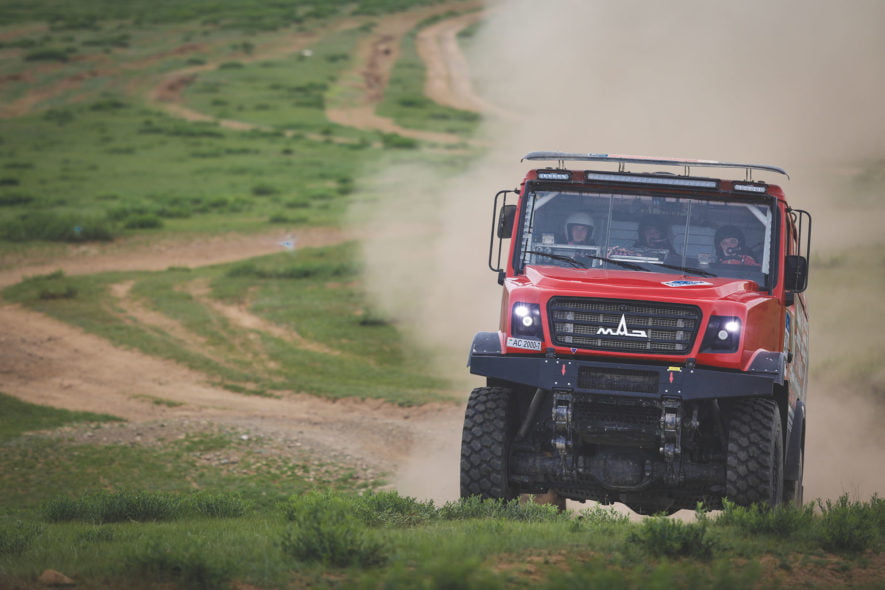 When you’re in the sand, you can go slowly and still make good time. But here, the terrain is such that you want to go fast – it encourages you. And opens you up to perils which camouflage into the horizon. Not excluding a wicked amount of dust and the animals which casually stroll into the line of fire, blissfully unaware of their role in such an event, or of the event itself. They just eat, excrete and, sometimes, get obliterated by race trucks. Let’s hope for everyone’s sake, luck is on either side of the pending incident. For the camas, all aspects of the rally are exaggerated: the size of the vessel, the speeds, the corrections, the consequences. All of which need to be respectfully ignored if teams like MAZ-SportAuto want to put three all of their rigs on the stage podium, which is exactly what they did today ahead of their rivals from KAMAZ-Master. A high-velocity race, with hordes livestock roaming wild, plus the aggressive KAMAZ drivers to contend with couldn’t have made for an easy win by Belarusians Siarhey Viazovich, Anton Zaparoshchanka and Andrei Zhyhulun in #304. Followed by their fellow countrymen Aleksandr Vasilevski, Maksim Novikau and Vitaly Murylev #311 and #307 Aliaksei Vishneuski, Pavel Haranin and Andrei Neviarovich. 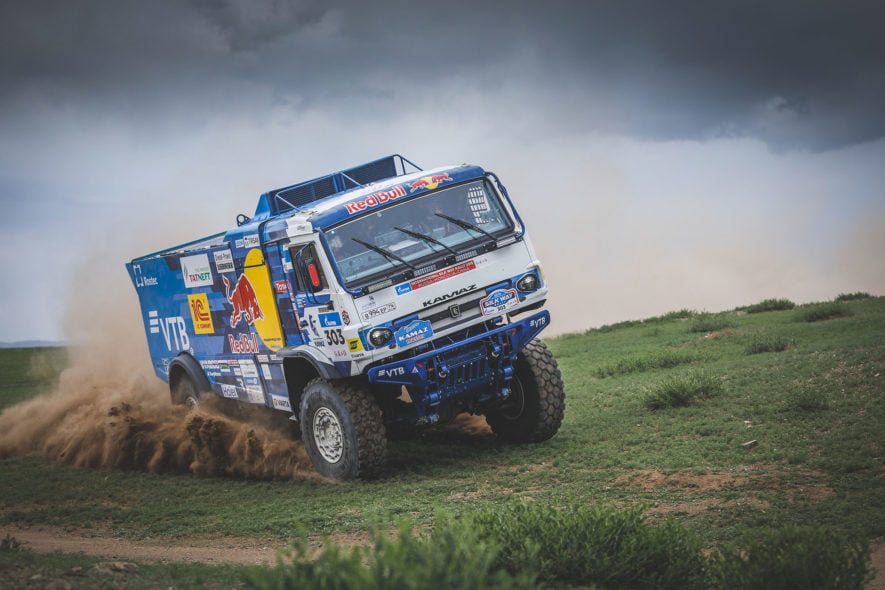 As one could expect from an event of this caliber, by the halfway-point the herd begins to thin out. Engine problems, exhaustion and injuries, all leading to the dreaded DNF. But it’s not a matter of giving up. There isn’t a person here behind bars or a dashboard who would throw in the towel without spending every ounce of energy, pushing through all the bruises and lacerations, even broken bones, to make it to the stage finish. Because if you can make it to the end of the special, maybe, just maybe, you can make it to the next start. And the finish once more. Then rinse and repeat. It’s crucial to take each challenge, each day, one step at a time when, in most cases, the only thing between you and ASS is willpower.

Ø In the motorbike category, only one woman is left in the race, with Laia Sanz holding her own amongst the top tier riders. While Dakar vet #58 Gabriela Novotna of the Czech Republic and Russian favorite Anastasiia Nifontova #56 both had to concede due to injuries sustained on Special Stage Three. Novotna with a broken leg and Nifontova with a broken collarbone.

Ø A three to five-day celebration across Mongolia begins during Part Two of the Marathon Stage. July 11th, 2019, Nadaam – the biggest event on their calendar – to honor the Mongolian revolution of 1921, shutting down an entire country (even the airports close). Competitions are held around three themes: archery, wrestling and horse racing (with shows displaying their incredible horsemanship). 1.5 millions participate, with expected 15,000 foreigners joining the festivities.

Ø Further south, the wildlife begins to include camels. (Camels!)