With the Marathon Stage Complete, the Racers Can Concentrate on the Finish Line

July 11th, 2019 – Silk Way Rally, Special Stage Five: Perched on a plateau 5,200-feet high, the race-pace climbed with the increasing altitude. This cocktail of monuments, open roads and stony hollows was nothing short of spectacular, quite a shame it was only seen in a blur. Part Two of the Marathon Stage traveled straight through the countryside which could be considered a key reason to visit Mongolia – if only one was needed. Formations of porous sticky rocks and boulders jutted from the ground almost haphazardly, some in colonies and others spaced out by several yards. Perfect to climb for a better view of the valley. Individual clusters resembled the natives who roam these lands: stalky, unwavering, visible but not towering. Those who are lucky enough to witness the sun break through the clouds and illuminate the sage, emerald and lime colored landscape are of an elite group. Race across it though, however the means, and you’re in a class all your own.

Velocity suits Sam Sunderland #6 (Red Bull KTM Factory). Maybe it was the wide, swift pathways or the familiarity of dune-like waves, only grass instead of sand. But nonetheless, Sunderland has made it a point to win consecutive stages, therefore dubbed “Marathon Man” by the organization. The pattern of riders across the leaderboard was painted like a Pollock– unpredictable and all over the place. Third seed overall Joan Barreda #11 (Monster Energy Honda Factory) gambled with Lady Luck and lost, enduring another substantial crash which has taken him out of the running. Teammate Kevin Benavides #7 and Red Bull KTM Factory rider Luciano Benavides #77 both stopped to offer their assistance. Although some time was incurred for the brothers, it didn’t affect their stage finish or overall scores since it’s customary to remove penalties if it’s to aid a fallen competitor. Kevin still begins Stage Six in the second position, followed by HERO Motosport’s Paolo Goncalves #4. 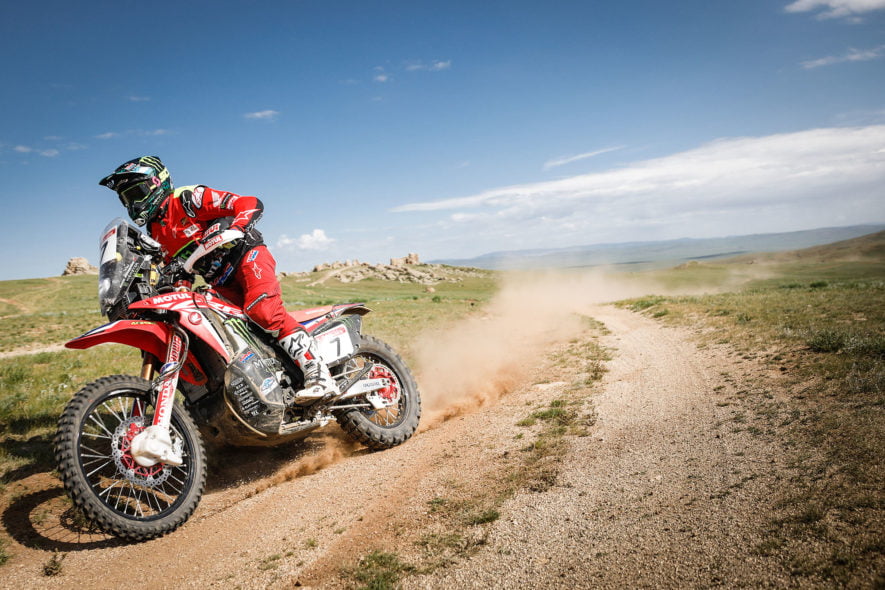 “Obviously opening the route is never going to be an easy, normally somebody can see your tracks and catch you up. I tried to keep the rhythm high all day and on the long stages you start to fatigue because at high speeds you have to be so focused. The bike is feeling really good, despite not being serviced overnight. The tire was a bit slick towards the end, but it is the same for everyone.” – Sam Sunderland #6, Red Bull KTM Factory 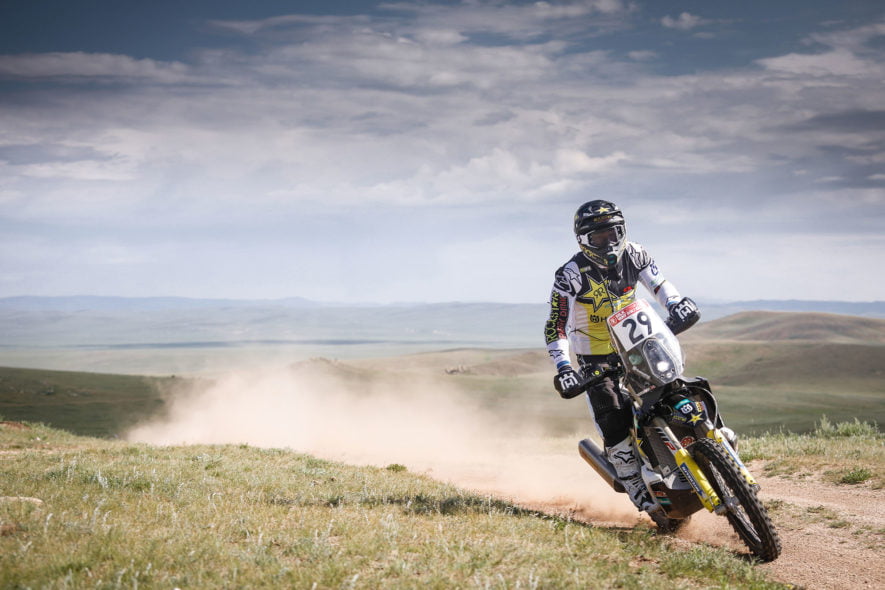 Xavier de Soultrait #16 (Yamaha Rally Team) is back in the race with no hope left to collect FIM points, but he’s taking full advantage of his “on the job” training, ending SS5 in 4th place. USA rider Andrew Short #29 of the Rockstar Energy Husqvarna team is still strong at 7th after the second Marathon, using his best weapons as tools: good attitude, cool demeanor, respect for the surroundings and, of course, consistency. But in a surprising turn of events, Arkadiusz Lindner from Poland #103 decided to hang up his hat after a few days of struggle on the racecourse, though he hopes to continue participating in the rally if everything in the bivouac goes as planned. This leaves only two fighting for the top position, though it appears from this vantage point #101 Rafal Sonik will be crowned King of the Quads ahead of Aleksandr Maksimov #102 who’s now behind by over 1 hour and 48 minutes. 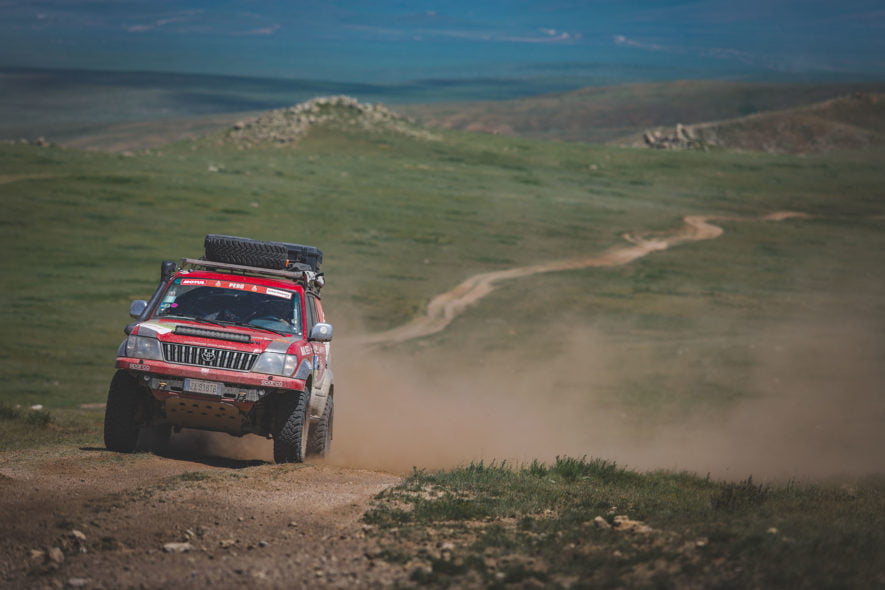 Buggies thrive in this sort of terrain, the earth more akin to the desert. While some excelled, like #203 Mathieu Serradori and Fabian Lurquin placing second in their CR6 STR, others met their demise. The #233 buggy – who had placed 4th on the first stage and simultaneously captured the Americans Austin Jones and Kellon Walch rolling over with their dashcam – has suffered a significant crash of their own (also caught on camera) losing them precious World Championship points. Speaking of team #229, Jones and Walch have been driving with fervor, finding themselves third in class once again, but they still have some time between themselves and the front-runner UTV, driven by Tatiana Sycheva (#253). Nasser Al-Attiya and navigator Mathieu Baumel #201 (Toyota Gazoo) continue to follow the yellow brick road. All they need to do now to win the coveted title, is not veer off the path… No accidents, no engine problems and they’re a shoo-in with a mile-long gap trailing behind them.

“A great stage for us! It was fast and everything worked out. We overtook a lot of cars and three trucks. Sometimes it was complicated and sometimes it was a little risky. I remember hitting 192 KPH overtaking a Kamaz. But Fabian navigated perfectly. We were secretly hoping for a stage win. But anyway, it proves that our decision to use the new buggy was the right one…” – Mathieu Serradori #203, SRT Team 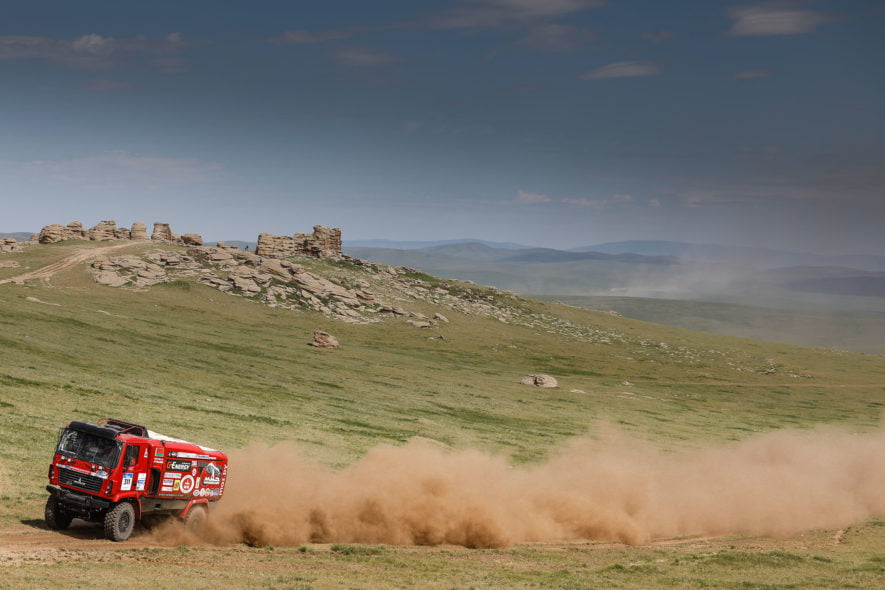 SWR proves to be exciting in every class this year, and the trucks are not to be left out. A battle has broken into all out war between the KAMAZ-Master team and MAZ-SportAuto. Where yesterday, MAZ cleaned house. Special Stage Five, made a comeback taking the 2nd, 3rd and 4th positions in the special – #303 Anton Shibalov, Dmitrii Nikitin and Ivan Tatarinov; #300 Andrey Karginov, Andrey Mokeev and Ivan Malkov; #302 Airat Mardeev, Dmitrii Svistunov and Sergei Krenev. One MAZ machine stubbornly held onto the podium, finishing again in 1st was #304 commanded by Siarhey Viazovich, Anton Zaparoshchanka and Andrei Zhyhulun. Their teammates however stumbled back into 7th and 8th.  The US vessel, manned by Aviv Kadshai, Izhar Armony and Maoz Wilder have managed to maintain their rhythm as well, seated in the ninth chair. How will these athletes fair as the days dwindle down? There’s only one way to find out…

“To avoid yesterday’s problems, we changed our tires and put more pressure in them. And it was a strategy that paid off. It helped us a lot to keep a very fast pace, even if that made our trucks less comfortable. Because the tires are an integral part of the suspension. We will continue to attack. There are four great stages left…to retake the overall lead.” – Andrei Karginov #300, KAMAZ-Master Team 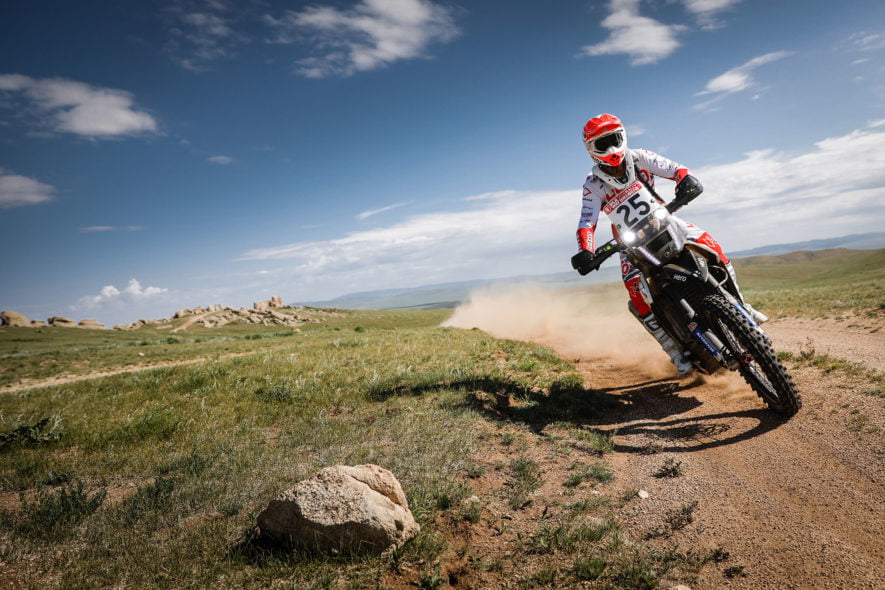 Ø “With no less than 5 stages disputed in the country, Mongolia sees half of the 2019 SILK WAY RALLY’s 10 racing days run on its territory. Translated into distance that’s 2.092 kilometers of stage, of which a substantial 1.458 are special. Or if you prefer, an exceptional 70% raced against the clock. Lots of work for the assistance crews, but a lot of smiles per miles for the competitors.” [Excerpt courtesy of Silk Way Rally]

Ø Tomorrow: Stage 6 – MANDALGOVI – DALANZADGAD: Distance: 411.75KM; Special Stage: 408.17KM; This is a section with fast and wide steppe roads. The main task of each competitor is to follow the road book and contend with constant changes of direction, and almost nothing in regard to landmarks.