Waving Goodbye to Mongolia, Teams Make the Most of Serious Speeds Before a Tedious Transfer

Silk Way Rally; Special Stage Six: What were once endless peaks and valleys of shimmery green, today was a sea of golden brown. The former curling of earth lay flat and placid with minor swells to offer a break in the monotony. But as the average viewer sees a void of features and hurdles, the rally racer sees a distorted horizon, complicating the legibility of the roadbook. This is really where the navigator shines. Having to use a keen set of eyes to swiftly read and execute quick-changing directions among the mess plate of pathways laid out in the dirt. The pace faster than ever, competitors are making the most of the free-for-all because these last few stages will offer a variety of countryside more akin to other World Class their used to.

Whether it was luck, skill or a bit of both, HERO Motosport’s Oriol Mena Valdearcos #25 outshined his adversaries taking the victory in this last stage before the long transfer to Northern China. Even more astonishing is Polish privateer Adam Tomiczek #31 whose grand performance placed him second after Mena, putting the Orlen Team into the overall Top Ten. Coincidentally, his teammate #32 Maciej Giemza too broke through. It’s moments like these which make rally raid so exciting. Grassroots racers rising up the ranks by their merit and the inevitable mistakes of their Factory comrades. The SS6 roadbook was tricky, turn right, and you’re on the fast-track to the Finish Line. Turn left, and like the Benavides brothers, Kevin (#7 Monster Energy Honda) and Luciano (#77 Red Bull KTM), the clock ticks away at lightspeed. This stage made a significant impact on the day’s lineup and the general standings, which, importantly, sees Kevin – one of the most promising riders of this year’s SWR – dropping to 7th overall. Sam Sunderland may have made some similar errors in the special, however, still maintains a comfortable lead in the rally.

Colorado-born Andrew Short #29 (Rockstar Energy Husqvarna) may seem like he’s hanging out in the upper-middle part of the pack when looking at his daily stats (for instance, he ended the stage in 6th), but in fact America’s most humble moto star is actually holding down 4th in the General Classification. Evidence his conservative tactics could lead to the podium after all! Fan favorite Laia Sanz #44 (Red Bull KTM) proved her worth once again finding herself in 5th after teammate Sunderland. On the other side of the celebration, Paolo Goncalves #4 of HERO Motosports is officially out when early on his bike came to a halt due to mechanical issues. 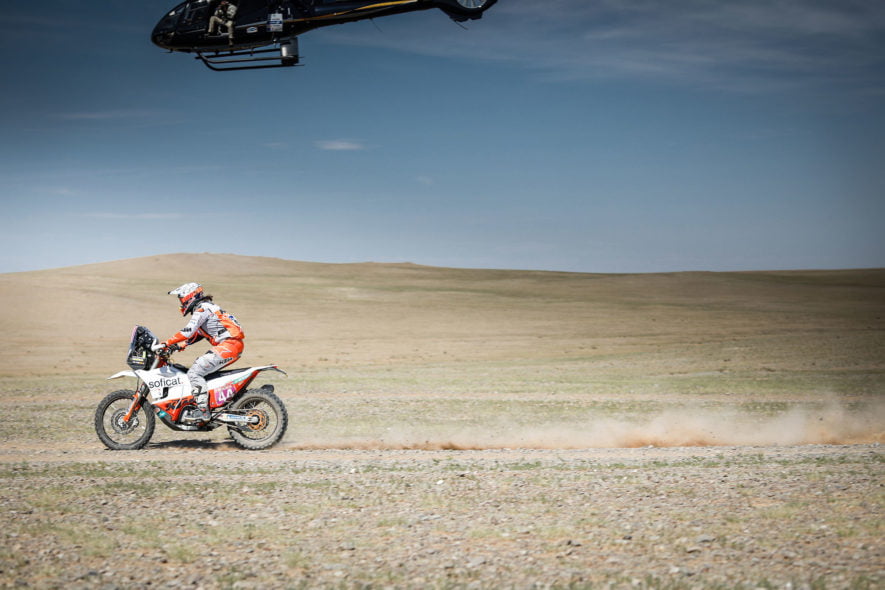 “Today, I am happy. It was a good stage for me. I just [got] lost a little bit…Luckily, I [chose the good way]. I [had] a good race, but anyway, I am happy because the first two days were not easy for me with the mud and the bumpy…and broken tracks. But [it] seems the third day I’m feeling really good, I’m confident with the bike and I feel really grateful because after last year, [when] I was sick and out of racing for a long time, it’s nice to feel strong again, and fast, and enjoy.” – Laia Sanz #44, Red Bull KTM Factory 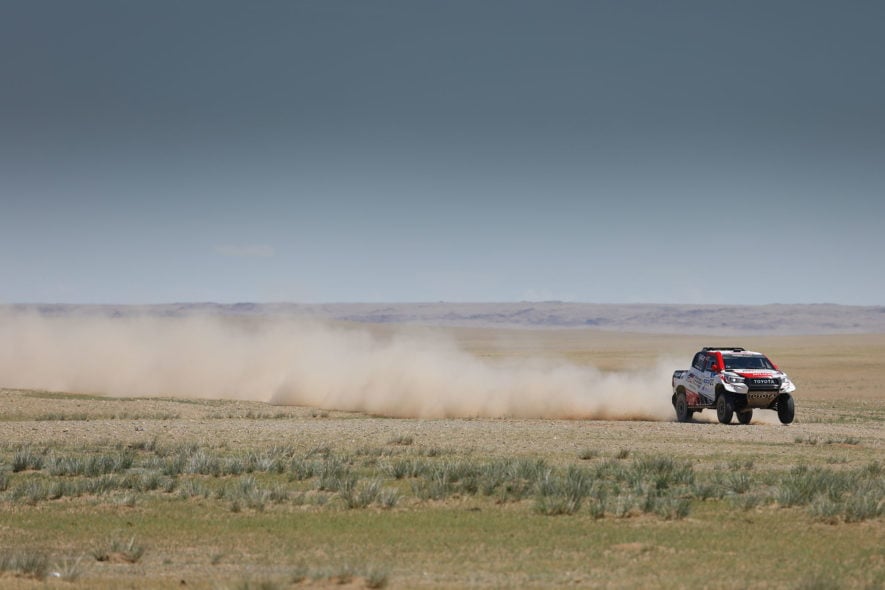 The Car class has been nonstop chaos. The order shuffled and reshuffled everyday like a deck of cards at the Tables, with only Nasser Al-Attiya and Mathieu Baumel #200 left out. In this scenario, they’d resemble the Jokers, sitting on the side watching as the kings, queens and other numbers are mixed incessantly. But the Toyota Gazoo team is no joke. Besting the rest by, now, 40 minutes and 33 seconds. A time which would have been even more impressive had they not missed three kilometers after the restart. Nonetheless, they again claimed the stage title. And although nothing is for certain, a betting man would likely put his money on Al-Attiya staying true to his word: finally winning the Silk Way Rally.

“The special was difficult to navigate. You had to really pay attention. At certain points we hesitated, but in the end, everything worked out OK. It is the 6th victory on the trot for us. Tomorrow is relaxed – just 550 kilometers of liaison to go into China, where we will discover the dunes of the Gobi Desert.” – Nasser Al-Attiya #200, Toyota Gazoo Team SA 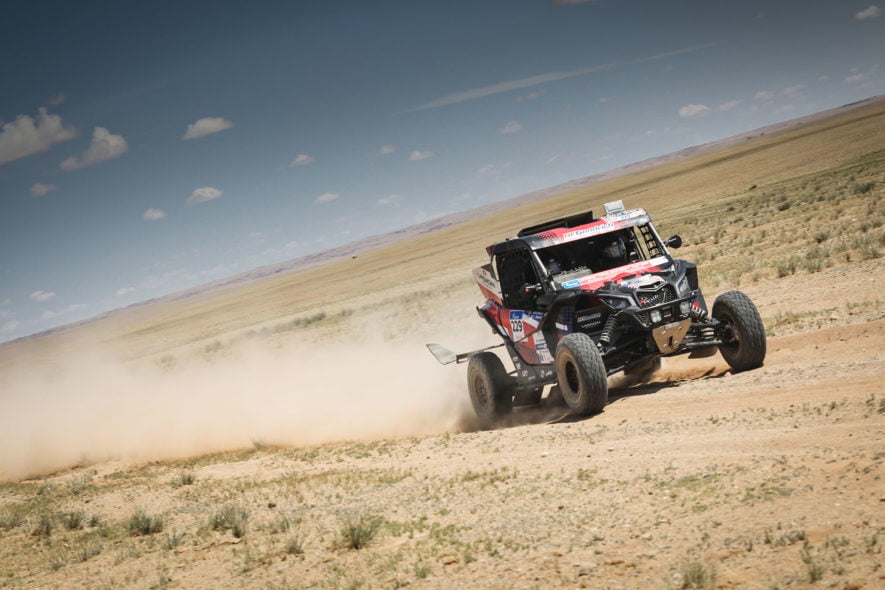 Within the scuffle, Eric Van Loon and Sebastien Delaunay #205 of Overdrive Racing earned themselves a much better position than the previous, ending the stage at 2nd after yesterday’s 7th place finish. Denis Krotov and Dmytro Tsyro #209 in the MINI would have achieved a spectacular feat if, after leading by 23 minutes only 50 kilometers from ASS, they hadn’t suffered a puncture and a stuck gearbox. A strong conclusion such as this could have brought them twenty minutes or so closer to the Winner’s Circle had they succeeded. “Team USA” in the Can-Am, Austin Jones and Kellon Walch #229, have made leaps and bounds to nestle into the SxS class’ second seat ahead of everyone but Russian team Sergei Kariakin and Anton Vlasiuk #220. 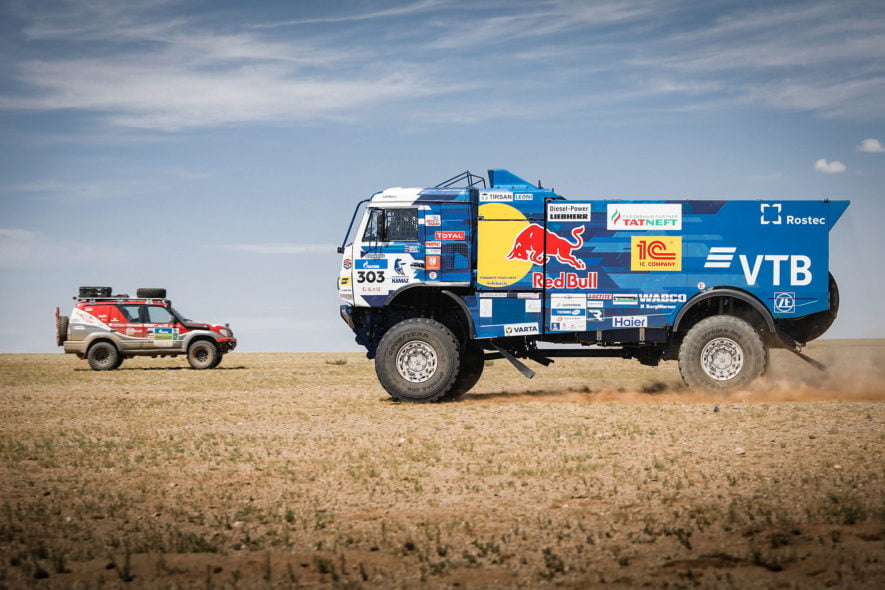 Plenty of politics are involved in rally raid, there’s no question. But it can be frustrating for those competitors who depend on results to determine their tactics. Although the MAZ-SportAuto team seemed to have claimed the stage victory, the starting order for the following special state otherwise. Instead, the KAMAZ-Master fleet has taken the three premiere positions pushing #304 Siarhey Viazovich, Anton Zaparoshchanka and Andrei Zhyhulun into 4th. Overall, the leading MAZ team from Belarus will begin again in China with a good enough distance to observe mistakes, even follow tracks, and make up for lost time. Leg Seven may not be a real rest day, but the liaison across the border can give the athletes time to consider their next strike. There are only three more specials left, and as the world works in mysterious ways. Anything can happen!

Ø Due to a track which had been badly damaged by mining trucks, for safety concerns the Race Direction team decided to cut Special Stage Six into two parts with a liaison from PK 157.23 to PK 286.65 – a total of 129.42. This deliberation also delayed the start of the race about an hour.

Ø “Kilometer 289.91 of this 6th selective section caused a major upset for some of the riders and drivers. You had to find [it] difficult to see track heading off on 270°. In the bike class, this note will remain memorable for Oriol Mena (HERO), who wins his first victory on this SILK WAY RALLY, it is also the place where Kevin Benavides (Honda) perhaps lost the race. In the cars, the changing of a bearing very nearly interrupted Nasser Al-Attiyah’s (Toyota) clean run.” [Excerpt from Silk Way Rally]

Ø Tomorrow: Day 8 (would-be SS7) is a long transfer from Mongolia to China. The entire event will be uprooting from the Southern Gobi and going by truck, car, bus and/or plane into the oppressive heat of China’s northern desert landing in Bayin Boalige.