Silk Way Rally; Special Stage Eight: Some have been dreading it. Others live for it. SS8, the longest and reportedly most difficult of the event, introduced the dunes. They weren’t the only obstacle of the stage, but the first portion of the 326.6KM special was certainly a white-knuckle welcome back to the racecourse after the only “non-race” day out of ten. 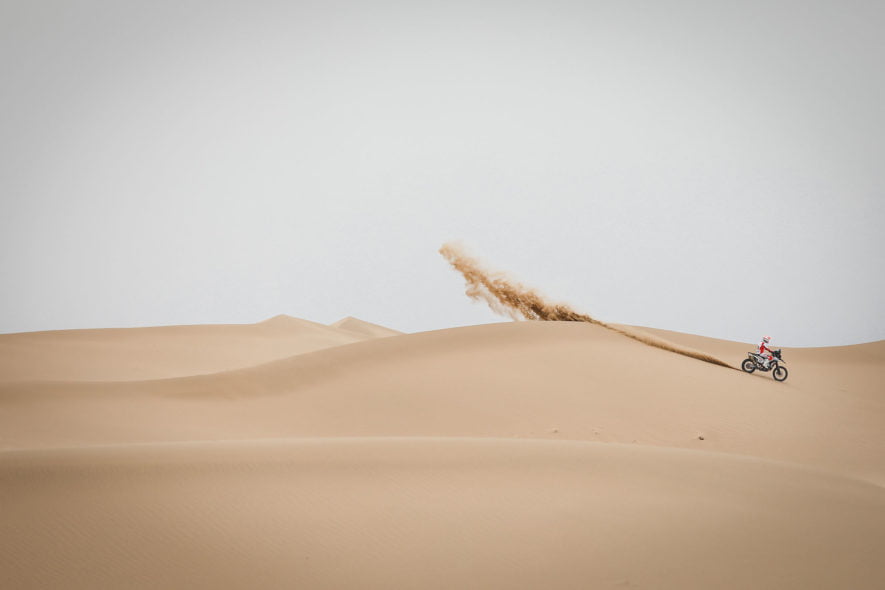 Just off the starting line, there was some traversing through low lying desert speckled with camel grass, the dirt chunky, cracked and tight around the barely visible pathways. As pilots approached the inevitable, the earth dissolved into a beach like sand, soft and deep much like you’d find in Baja California. And then, there were dunes. Humble at first, but challenging nonetheless, where racers encountered sharp cliffs which perimeter sequential shallow valleys. More demanding than intimidating. And don’t dare let off the gas or you’re bound to be buried, if not take a tumble, which is what camas #304 MAZ-DportAuto endured not too far into the stage, but more on that later. The fast section in the middle was multifaceted, offering dry riverbeds, ravines, canyons, another few steppes and was quite a bit quicker to navigate. But then, before vehicles could reach the ASS, dunes were brought back into the picture, this time staggeringly more monstrous.

“Today I feel really good. I really enjoyed the first stage in China. It was very different from what we’ve had until now. More navigation, more desert, the dunes… It is an amazing place here in China. I am happy with my work today. We have two more days, and my goal is to try and recover time.” – Kevin Benavides #7, Monster Energy Honda Team

Kevin Benavides #7 (Monster Energy Honda) surfed the proverbial waves as one might expect from a Dakar veteran, finishing in the coveted position – and moving him to 2nd Place overall only about 25 minutes behind Sam Sunderland #6 (Red Bull KTM Factory) who completed the special 8th after sustaining a crash. Nipping at his heels was Adrien Van Beveren #10 (Yamaha Rally Team) reaching his highest position yet this event sitting comfortably in the second seat 42 seconds behind Kevin. These results bring the Frenchman to the Third spot in the General Classification. Privateer #31 Adam Tomiczekof the Orlen team, who surprised us all with his spectacular slide into Second at the end of SS6, began SS8 clean, but was quickly surpassed by Monster Energy Honda team rider, Joan Barreda #11 (who concluded in 6th) and found himself outside of the Top Ten of the special,. But he held his respectable 9th place in the overall standings, followed by teammate #32 Maciej Giemzain 10th. Andrew Short #29 (Rockstar Energy Husqvarna) looked really comfortable in the sand making the slippery madness look effortless, yet his stats today don’t quite reflect this. The only American motorcyclist here in the East in fact fell further back than expected into 9th. Undeterred, he still holds onto 5th in general.

Initially, it seemed Rafal Sonik #101 may have experienced some mechanical issues as he was finally overtaken by his one of his adversaries, #102 Aleksandr Maksimov, reordering the Quads for the first time the entire race. But Sonik Team’s press officer cleared the air saying, “it was just slow day” and reassured us this is a minor setback. Which of course is true if the last two stages continue to go in Sonik’s favor, as he’s still well ahead of both Maksimov and #103 Arkadiusz Lindner in the competition.

Lucky number Seven, Nasser Al-Attiya and Mathieu Baumel #201 (Toyota Gazoo) are undefeated so far and are in it to clean house. The whims of destiny could still catch up with them, as with a few of the top competitors this race, but if not, we’ll be sure to see the duo in the Winner’s Circle in Dunhuang. This is the first time in Silk Way Rally history a team has ever achieved so many victories in a row. Second after Al-Attiyah, the Dutchman Eric Van Loon and Frenchman Sebastien Delaunay #205 of Overdrive Racing held their car in position like a swift cat evading a pack of ravenous dogs. And the only thing which can satiate their hunger is a podium finish. With just two steaks left – or so it seems – will it be Chinese Geely Auto team piloted by #208 Wei Han and Min Liao, currently holding the 3rd step? Or the French Raid Lynx team, #212 Jérome Pelichet and Pascal Larroque, who, at the moment, is the meat in this premiere sandwich? Although, neither team ended SS8 at their best also being taken by SRT Team, #203 Mathieu Serradori and Fabian Lurquin rounding out the Top Three.

“I remember the Gobi Desert being beautiful but not this magnificent. We drove in a superb special. The dunes were incredibly high. In certain places we were incapable of following the tracks of the bikes all the way to the top and had to make our own route. The camel grass was hard on the car…and on my neck. I thank my co-driver for the excellent job he did today. I have no hesitation in saying he is the best navigator I’ve had by my side in the last 12 years!” – Eric Van Loon #205, Overdrive Racing 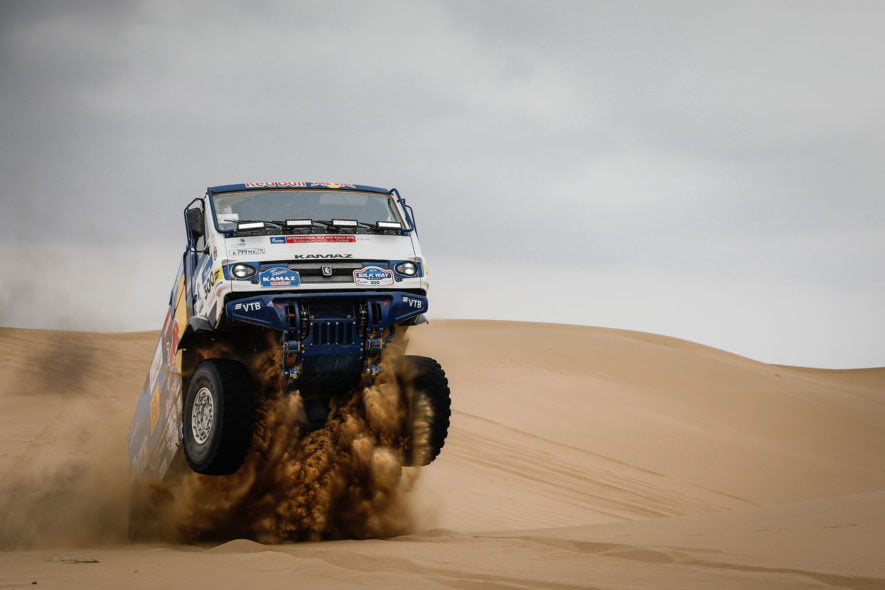 No matter who you’re rooting for, it’s the camas we all look forward to watch tackle the dunes. These giants of Motorsport precariously teeter-tottering in banked turns, maintaining alarming speeds to climb the steep, slick hills, sending it over the crest and exposing its belly to the terrified onlookers – like coming across a pissed off grizzly in the woods standing on its hind legs to display dominance. You could hear the #303 KAMAZ-Master truck for miles, engine noises bouncing around like a pin ball making it hard to mark their direction. The cars and the bikes and so on can be heard much the same manner, but they just don’t equal the vibrato. A roar bellowed into the air before #302 KAMAZ (Airat Mardeev, Dmitrii Svistuno and Sergei Krenev) landed into sight dividing the earth beneath it, then soaring away into a Second-Place finish. Closing out the podium on the third step was team #300 Andrey Karginov, Andrey Mokeev and Ivan Malkov who have trained well for this world class landscape. The most promising truck of the race, #304 MAZ-SportAuto manned by Belarusians Siarhey Viazovich, Anton Zaparoshchanka and Andrei Zhyhulun, unfortunately succumbed to the sand hills between Bayinbaolige and Alashan rolling off a steep cliff. Although they landed on their feet (er, tires), the roll cage was irreparably damaged forcing their hand. This loss gave way to the (almost) full KAMAZ fleet clinching every ledge of the podium. With such a spirited show keeping the KAMAZ at bay over the last six stages, it’s sad to see the MAZ truck out of the running. But this is further proof that anything can happen, even this far into the race. 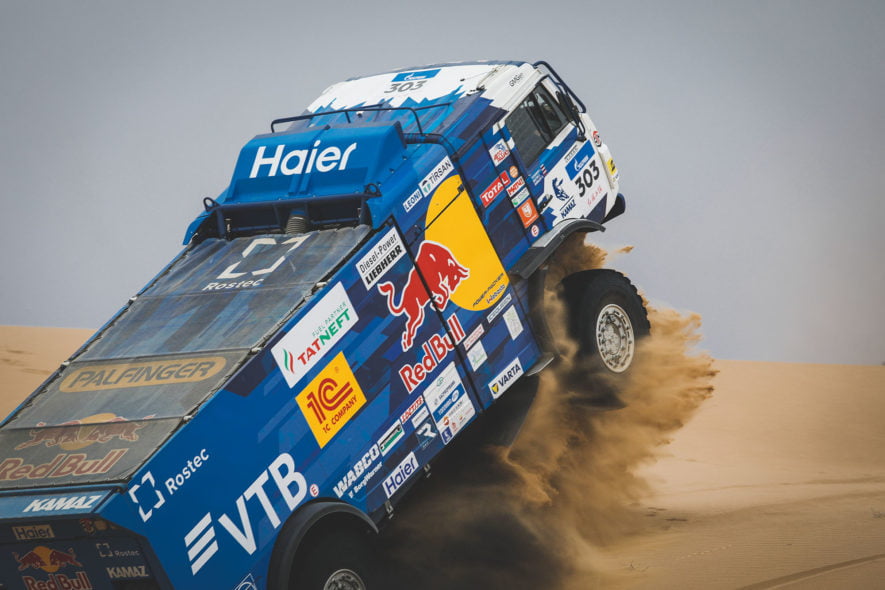 “On crossing a dune, I saw Viazovich stopped over to my left. The crew seemed ok, and I couldn’t see any damage to the truck. We carried on our way without taking any risks. The dunes were much more abrupt than on previous years. The nose of the truck hit every crest before jumping over the obstacle. Fortunately, we didn’t have to stop.” – Anton Shibalov #303, KAMAZ-Master Team

Ø Unlike many of the FIM World Championship rallies, this year, the Silk Way Rally only offers two days of dunes – each special (SS8 & SS9) still including a variety of terrain along with the sand sections.

Ø “Tomorrow: Stage 9 from ALASHAN to JIAYUGUAN starts from the finish point of previous day. It will be a fast and beautiful route, mostly set along sandy roads. This is the moment when one gets to admire amazing fixed dunes of Gobi Desert. The next part on your way to finish is slower, as bumps and ‘dunettes’ are mixed here with dry riverbeds, but the last kilometers will be very fast.” [Excerpt courtesy of Silk Way Rally]