A Rally This Savory Needs to Be Indulged…

(But Too Much Good Stuff Could Lead to An Upset)

Competitors left the bivouac near El Golfo de Santa Clara Tuesday morning and somewhere along the liaison were transported to Mars. No, Venus. It was much hotter than a rock four planets away from the sun. The further inland the pilots ventured, the more stifling the weather became. We’ve seen this scene before, or something like it, at the Dakar Rally. This year, Peru’s monstrous dunes dwarfed even race-spec garbage trucks. And yesterday in the best sandbox Sonora has to offer, racers felt the magnificence of the landscape which lay ahead. Several succumbed to the trials – DNFs, minor injuries, on-course repairs and running out of fuel. Just another day at the races. But for many, this is what they live for. With no challenge there’s nothing left to win, to achieve, and making it to the finish in one piece, let alone in decent time, this day, was an accomplishment well-earned. 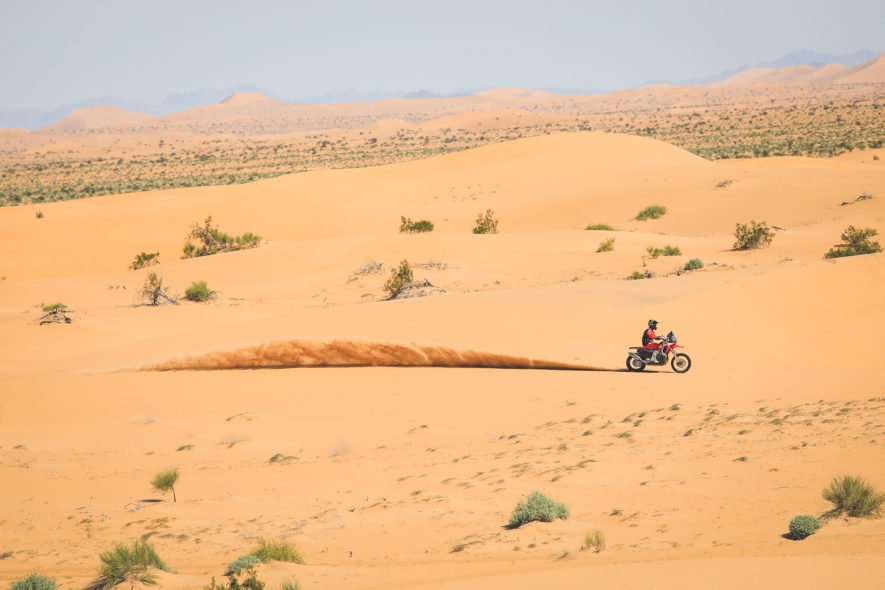 Puerto Peñasco welcomed racers into a large parking lot alongside the beach in the midst of transformation into Bivouac Number Three. Grilled meats were prepared seaside and treats were a small gesture for the weary teams. Those familiar faces had entered the winner’s circle hours before the rest of the pack – Ricky Brabec #2 coming in a solid 20 minutes before Skyler Howes #1, who had likewise built a wide gap between he and the next rider. Both riders appeared unfazed by the stage, even expressing enthusiasm about taking on the dunes. Brabec mentioned in passing that he prefers the pace in the sand and explained it can actually be easier to hit waypoints on the bullseye. Howes’, the 2018 Sonora Rally champion, applied all the skills and experience he’d picked up from racing the 2019 Dakar to what was once a personally dreaded section of the racecourse. 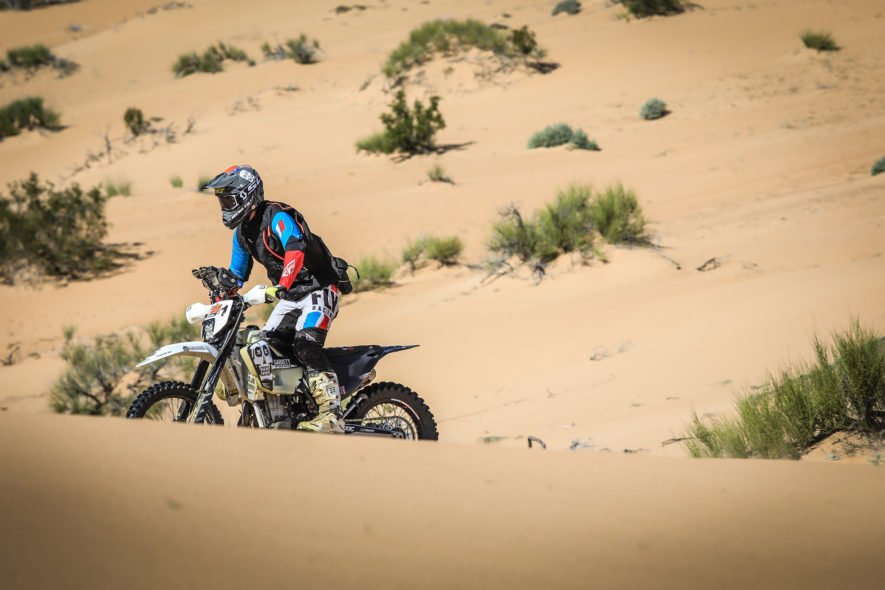 “I was definitely looking forward to the big dunes day today. Last year I struggled on this stage but after my experience in Dakar I was excited to see how my navigation and skill improved. I felt great and had a lot of fun, the navigation was tricky in some spots, but I was able to nail it. These dunes are huge, but after Peru, my perspective changed, and I was definitely less intimidated by them which helped my overall speed.” – Skyler Howes #1, Garrett Off-Road Racing Team 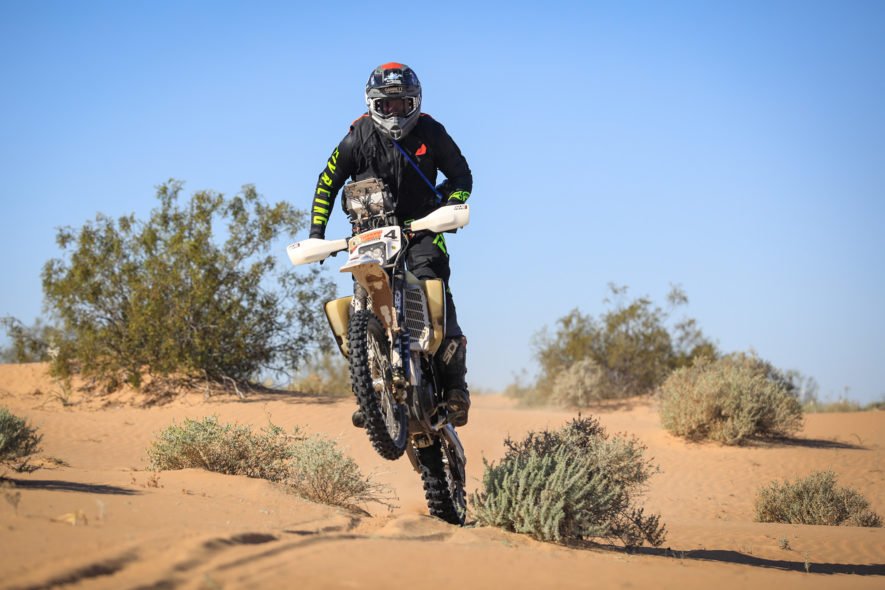 Every epic battle has casualties. The rally bid farewell to top contender after Garrett Poucher #4 who reportedly suffered a knee injury in the first quarter of Special Stage Two and was forced to leave the podium in the very capable hands of his teammate, Skyler Howes. And although the young rider has a clear shot to the steps, he feels sure his chances at a second winning title have slipped through his fingers due to unforeseen issues with fuel capacity.

“My biggest issue is coming from my fuel mileage, and the last 30km of today’s special I had to ride at 30% in order to save my fuel and make it into the gas check, which hurt my time in a big way. So, after yesterday’s 25+ minute fuel delay, and today’s slow down, I’m well off the lead, which is frustrating because it would have been fun to test myself against Ricky. But! I’m headed into day three happy, healthy and having a great time.” Skyler Howes #1, Garrett Off-Road Racing team 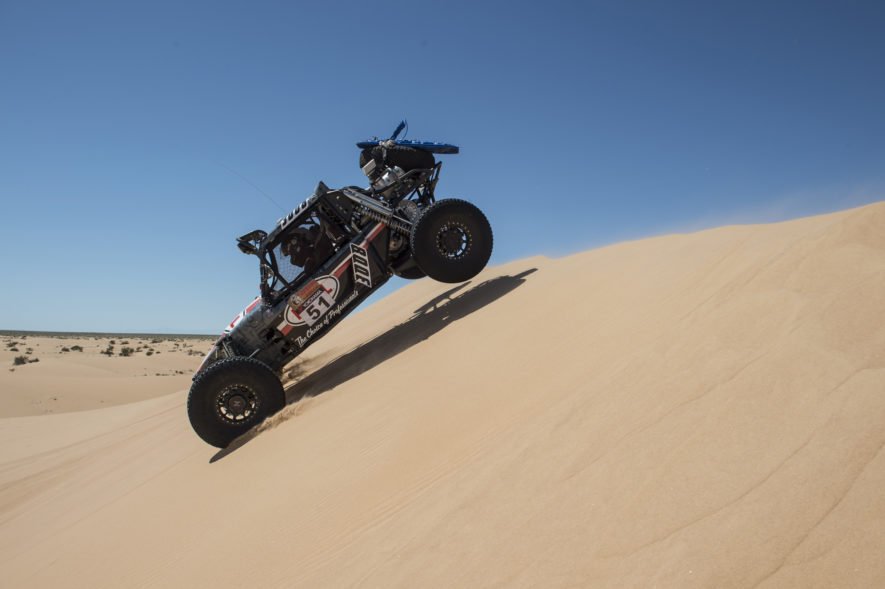 Cars & UTVs have seen a fair share of mishaps as well, but one man who’s notably climbed to the top of the pack is none other than former pro motorbike racer, Chris Blais #49. As if meant for it all along, his knowledge navigating from behind a set of bars has applied nicely to his new position holding a wheel. Although he can’t breathe easy yet, Javier Luis Pelayo #60, Dave Sykes #52, and Eric Pucelik #52 have been Blais’ toughest adversaries throughout the week so far, all vying for the first, second and third positions. But with three stages left, could an underdog emerge from the four-wheeled pack to take the victory? Or will the fearsome letters “DNF” claim another handful of victims and reorganize the lineup? 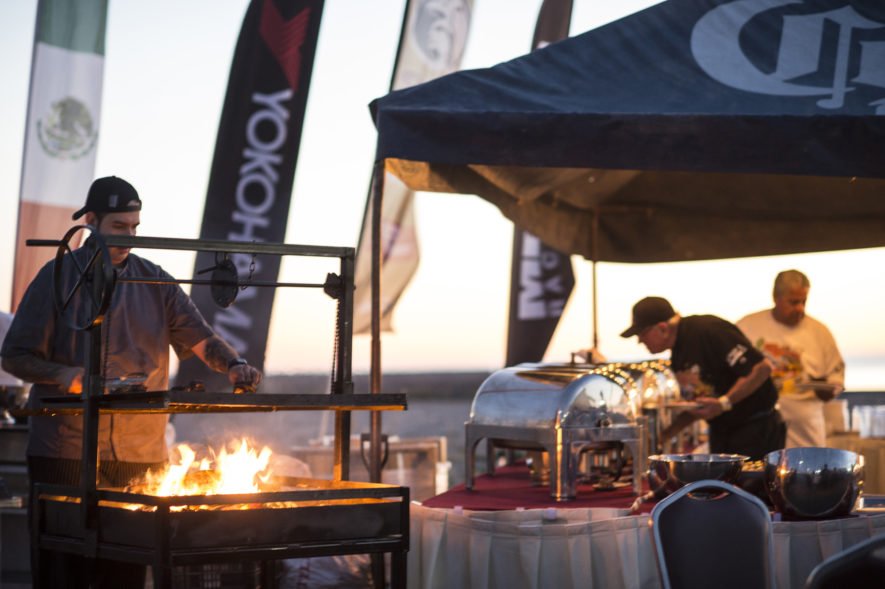 If nothing else, SS2 gave the teams perspective. Showing them, each of those involved, their limits. There needs to be one of these in ever rally raid: a defining moment. A stage which separates the field to reveal those who have mastered both navigation and navigating the terrain (these things are different). These are the stages which put a sharp focus on certain competitors, commanders of their craft, doing the impossible. It’s why we the viewers can’t peel our eyes away from the screen. Why we travel hundreds of miles to have our favorites fly by, once, and if luck would have it, we just might catch a whiff of exhaust. A stage like yesterday’s is why we chow-down on any digestible content served to us from a clickable dot-com menu. To choose to race is already a feat alone. Deliberately putting one’s self through hell and back for, quite often, absolutely nothing. Nothing but memories, that is. But to witness (wo)man master machine in such breathtaking ways over seemingly impassable wilderness, with only gibberish on a paper scroll as a guide, dominating over a group of 60-plus? Now that’s a dish worth going back for seconds…or thirds. 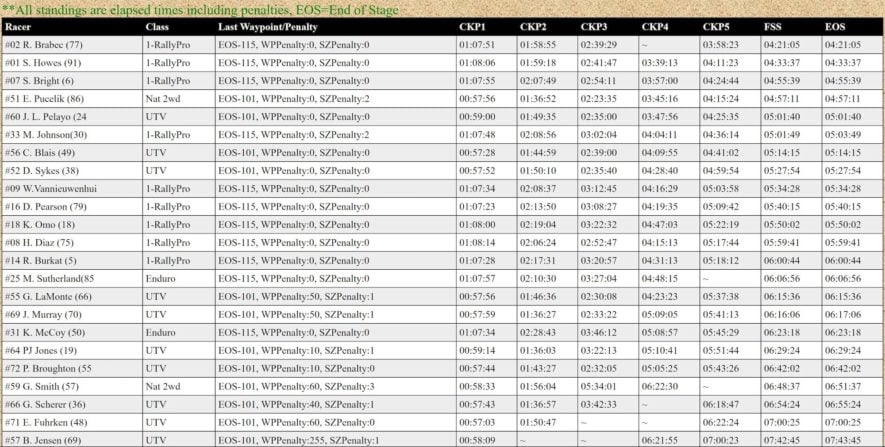