Midway Through the Five-Day Rally, Pilots Still Have Plenty of Fight Left

Wednesday, March 20th marked the end of the road for some key players. The journey from Puerto Peñasco to Puerto Libertad was a demanding one indeed, shedding substantial weight from the rankings. But a war still wages on among those left to fight these final two battles.

Challenging navigation seems to be a trend this year, as are the epic landscapes and formidable terrain – quite akin to what teams faced at the Dakar Rally last January. Though the racecourse broke free of the dunes for most of the event’s third Special Stage, what little of the deep sand was seen still caught many pilots off-guard. Cliffsides would literally drop out just over the crest, like having a rug pulled out from under you…but you’re moving at race-pace with a ten-foot fall ahead of you. Obstacles which a roadbook can only do so much to help the riders and drivers really anticipate. But before they hit the dunes, competitors traversed ranchland, fields of cacti which grew dense as they weaved their way closer to the mountains. And then, the horizon opened up into quick, wide vistas of desert, only to close back up again. 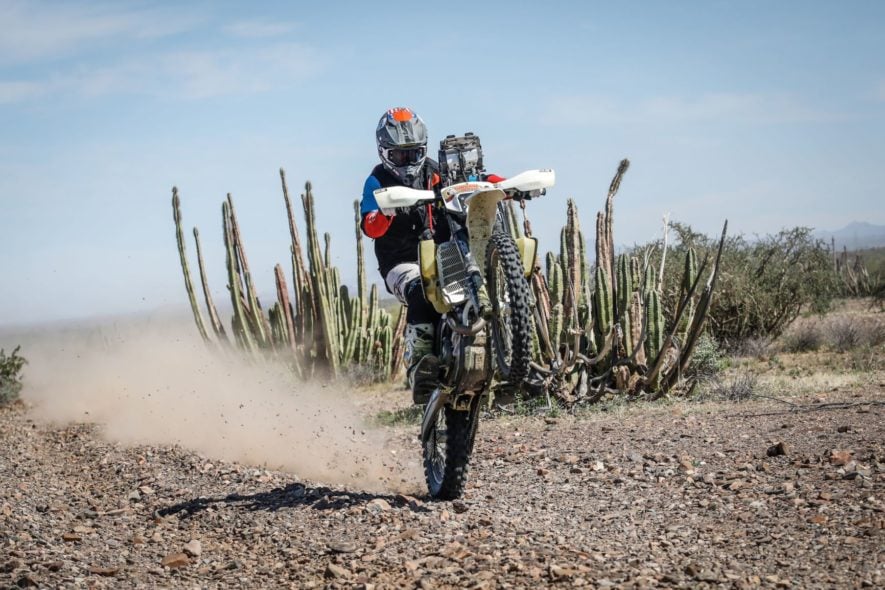 Unsurprisingly, we saw the same two faces at the front of the Pro Moto class: Ricky Brabec #2 and Skyler Howes #1. Howes was making good time and could have probably nabbed his first stage win of the race if not for his navigation tower rattling of his bike and snapping in two. Duct tape to the rescue, he was back on-course in a flash, but unfortunately, not fast enough to catch up with Ricky. Charging through their wake, in third overall is Rally Comp’s very own Mike Johnson #33 while Pro Aaron Richardson #15 follows by nearly hour. In the Enduro class, Matt Sutherland #25 holds the lead above Kyle McCoy #31 and Vasile Scurtu #21.

Even if Richardson doesn’t take a place on the podium this year, he seems a shoo-in to win the Morocco Challenge – distances between the riders begin at a two-plus hour gap – which offers complimentary admittance to race to the Rallye du Maroc in October to the champion. Although in rally raid, it’s a fool’s errand to try and place a victor before the finale, though for whichever bike triumphs, it will be in for a treat. This historic event samples sections of the original Dakar Rally route through Northern Africa, an envious experience for those (only) fortunate enough to compete in the “Big Show” in South America. But with talks of Dakar packing up and journeying back over the Atlantic in 2020, the winner of the Road to Dakar just might find themselves in similar regions. One can only hope. Though Chris Blais #56 continues to dominate the UTV class, he is ineligible to compete in this segment as he has already raced Dakar in 2007 – on a motorcycle, nabbing 3rd place overall. Yeah, he’s fast. In whatever he tries, it seems. And lucky for the current contenders, Dave Sykes #52 and Javier Luis Pelayo #60, Blais isn’t in competition for that highly coveted free entry. 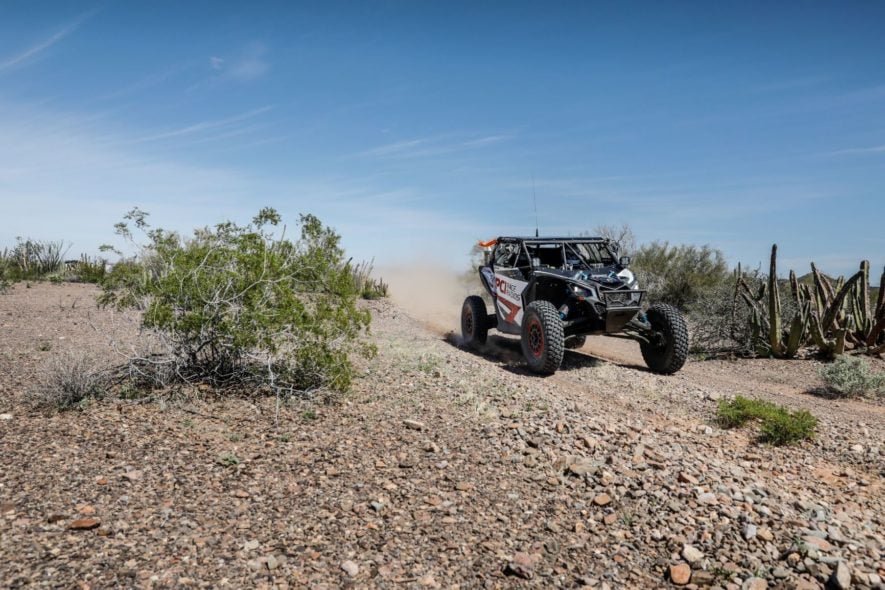 “We’ve gone through some tough days – the longest stages we’ve ever run in the dunes. A super long-distance stage today [Wednesday], which everyone completed with good time. So, we’re kind of over the hump now. There are two short, really beautiful stages to come, with a couple tricks added in which could still wreak havoc on the final standings because of the navigation – especially on the last day. Pretty excited to be in Puerto Libertad again, it’s been a couple years… Great food, great time, great views.” – Darren Skilton, Yokohama Sonora Rally Race Director

In the UTV class and overall, Blais, Sykes and Pelayo make three the points of a crown placed at the head with Eric Pucelik #51 driving into Fourth overall and First in the N2WD segment, while Ben Swain #63 is leading the N4x4s. It’s not all good news, however, as the circumstances of the field and requirements of the day knocked out some heavy hitters. We’d already lost Moto Pros Justin Morgan #6 and Garrett Poucher #4 to Special Stage 2, but now the event is giving the peace sign to Joe Bolton #54 in the UTV class. As well as a reluctant pair: Scott Bright #7 who went over his handlebars due to a precarious cattle guard, resulting in a yet undiagnosed shoulder injury. Though you won’t see this incident reflected in the standings as Bright chose to ride the remaining 100-plus kilometers of the special and liaison to the bivouac. Another loss, who likewise refused to accept a DNF that day, Wes Van Nieuwhuise endured a tremendous off-bike episode causing some serious neck pains which were enough to keep him from continuing the rally.

“Everything was going really smoothly until today, when both team riders, Scott Bright and Wes Van Nieuwhuise, were injured. Unfortunately, they are out for the rest of the event, but everybody’s doing well which is better than what can be expected at the speeds those two are racing.” – Alex Martins, Rally Pan Am Team Owner

Ø The Yokohama Sonora Rally presented by Method Race Wheels has welcomed to it an “Expert Developer” iteration of the Moto class, which allows the riders to compete – though not for the overall title – while field-testing innovations to motorsports. And in this case, what could be the new standard for rally racing. With heated debate over “Map Men” and homework taking place at rallies, this digital roadbook being developed by ICO Racing and F2r (free-to-ride) specifically for FIM, ASO and other premier off-road rally circuits is a hopeful solution to the unfair advantages believed to spawn from teams having roadbooks in their possession overnight. 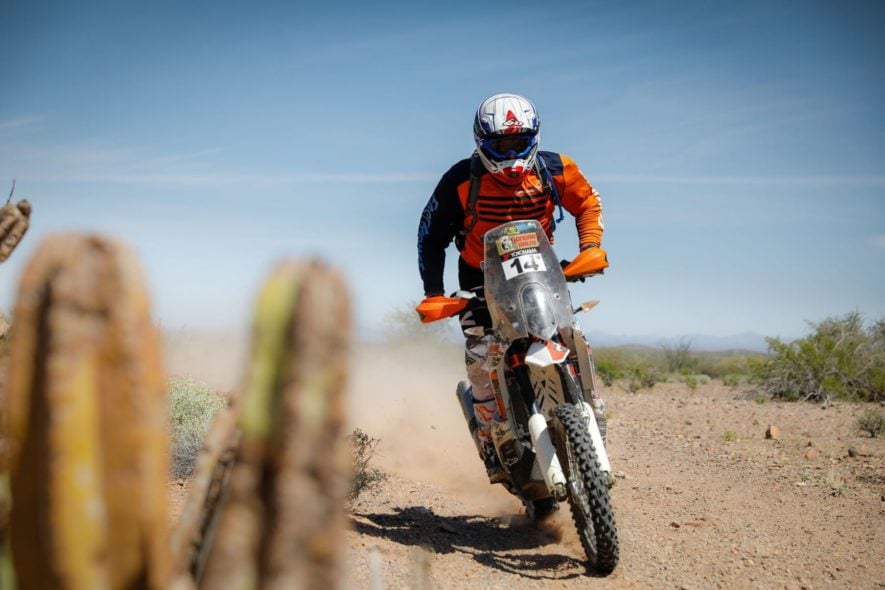 Ø Results by Class as of SS3

Ø Morocco Challenge results as of SS3

Ø Road to Dakar Challenge results as of SS3 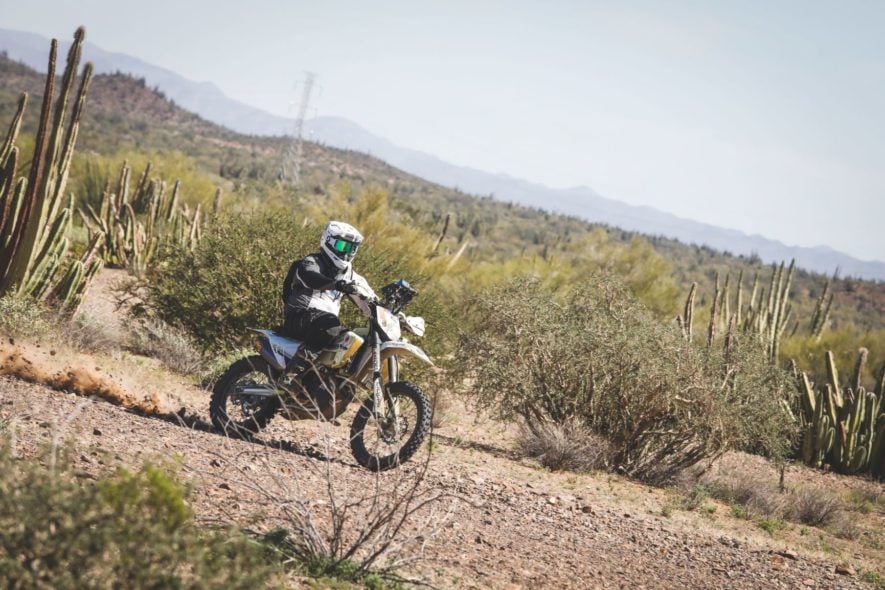