As the dust settles on the 2020 BFGoodrich Tires Mint 400, there was plenty to celebrate from the biggest and baddest event in off-road racing. After another successful year of action, some of the biggest names in the sport added more hardware to their trophy cases, while new names and faces added their names to the illustrious list of finishers of the Great American Off-Road Race. 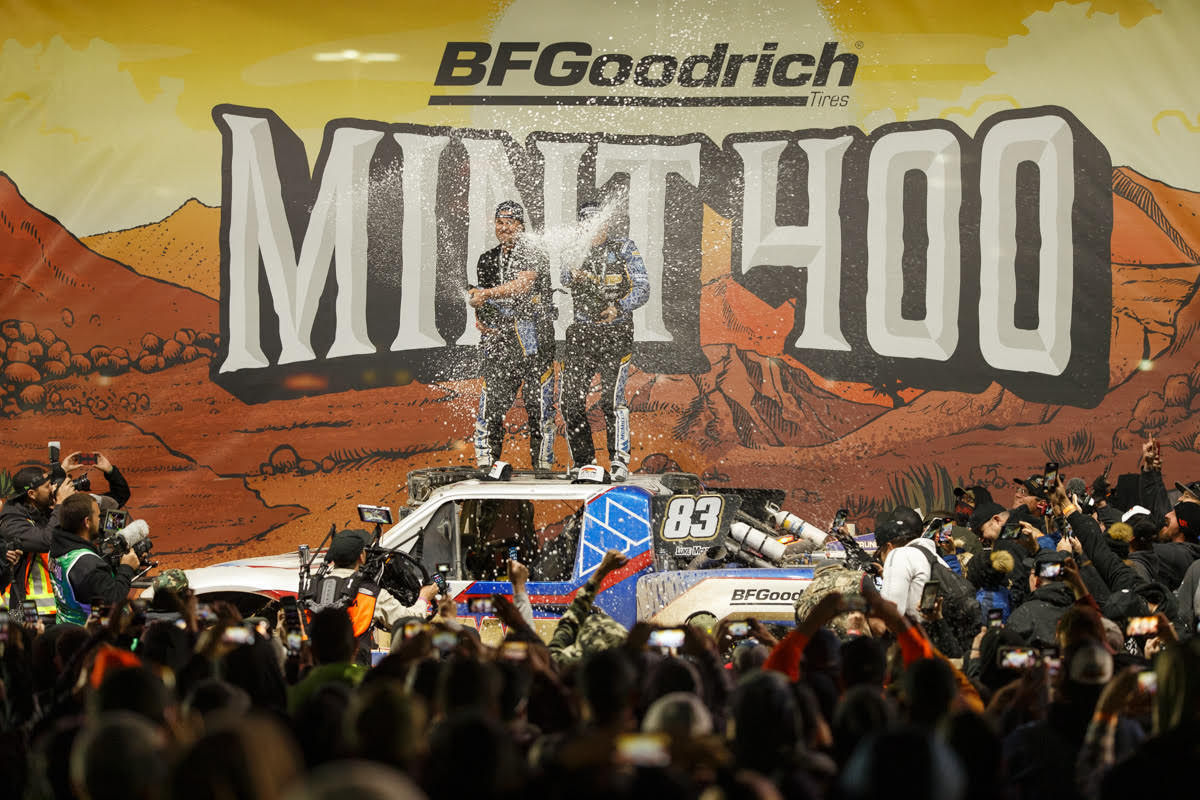 Unparalleled Livestream Coverage
The entire event featured the most comprehensive live streaming coverage in off-road, kicking off with Method Race Wheels Qualifying on Thursday and continuing through Friday and Saturday’s action. With dozens of cameras on the ground, in the air, and on board from 2017 winner Rob MacCachren’s Unlimited Truck, as well an all-star panel of hosts and guests, live coverage of this year’s BFGoodrich Tires Mint 400 set a new standard for the off-road industry to follow for years to come.

Military Challenge
Unique entries were the name of the game this year, and this year’s event featured an extensive military presence. The Mint 400 Military Challenge raised well over $100,000 for charitable foundations that support military veterans and families, while Team Warfighter Made took the victory among the Military Challenge teams that competed in the UTV Rally class with vehicles supported by Zero 1 Off-Road. In addition, the event’s new Military class featured a diverse collection of combat-ready vehicles proving the viability of armed forces equipment over rugged terrain.

Team BMF
In addition, Team BMF saw the trio of UFC fighters Donald “Cowboy” Cerrone, Brian “T-City” Ortega, and Yair “El Pantera” Rodríguez team up with Eagles of Death Metal frontman Jesse Hughes in a Zero1 buggy to score a second place class finish in the event. Cerrone, Ortega, and Rodriguez, who have combined for 50 victories and 14 UFC Fight of the Night honors, ran the beginning portion of the race, while Hughes completed the event just one night after Eagles of Death Metal headlined the Mint 400 Main Stage in downtown Las Vegas following the AMSOIL Pit Crew Challenge.

Massive Field of Entries
This year’s event featured a deep entry list of 525 competitors, including 246 cars and trucks, 186 motorcycles, and 93 combined youth motorcycles and UTVs in the debut of the NGK Spark Plugs Mini Mint 400 presented by Yokohama. 56 women competed in this year’s event, including new Miss Mint 400 Emily Dobrzenski, who served as navigator for Mint 400 veteran and former class winner Lacrecia Beurrier in the UTV Pro Unlimited class.

Tens of Thousands of Spectators
All told, over 65,000 spectators experienced the 2020 BFGoodrich Tires Mint 400, whether on Fremont Street in downtown Las Vegas for the Mint 400 Off-Road Festival or in spectator areas in Primm or Jean. With an exceptional turnout by competitors and off-road racing fans alike, this year’s race only served to set the stage for an even more exciting and immersive race experience for the coming years.

Information on the 2021 BFGoodrich Tires Mint 400 will be revealed in due course. For results and images from this year’s Great American Off-Road Race or to replay streaming coverage, visit themint400.com or follow @themint400 on social media.

About The Mint 400
Known as “The Great American Off-Road Race™,” The Mint 400 is the most celebrated, prestigious, and challenging off-road race on the planet. This annual four-hundred mile marathon between the top off-road racers in the world includes over four hundred and fifty race teams in twenty-four different classes of off-road vehicles. Established in 1968, The Mint 400 is steeped in American lore. Thousands of racers and celebrities from around the world have attempted to tame the brutal Nevada desert, but less than half of them have ever finished the Mint. An entire week of events lead up to the famed off-road contest in and around Las Vegas, including a vehicle parade down the Las Vegas Strip, a drivers meet and greet, a pit crew challenge contest, the Miss Mint 400 beauty pageant, massive parties, a qualifying race, and a huge ten-block “contingency” gathering on Fremont Street East. Over forty-thousand spectators gather to watch the world’s best off-road race teams do battle at The Mint 400!

About Mad Media
Established in 1995, Mad Media is a San Diego based marketing and creative agency, specializing in adrenalized film and television production. Owners Matt and Josh Martelli have spent over two decades crafting authentic, culturally engaging brand messages in print, web, photography, and film platforms for some of the worlds top brands including Red Bull, BFGoodrich Tires, and Polaris Industries.  Mad Media’s viral film projects, such as the Gymkhana series and XP1K series, have been viewed hundreds of millions of times. From their early days as pioneers of branded viral video content for skateboard companies Osiris and Expedition, to their most recent work spreading the gospel of off-road racing with the world famous Mint 400, Mad Media remains a powerhouse pioneer of digital media.