2020 Dakar picks up pace over dunes of Saudi Arabia 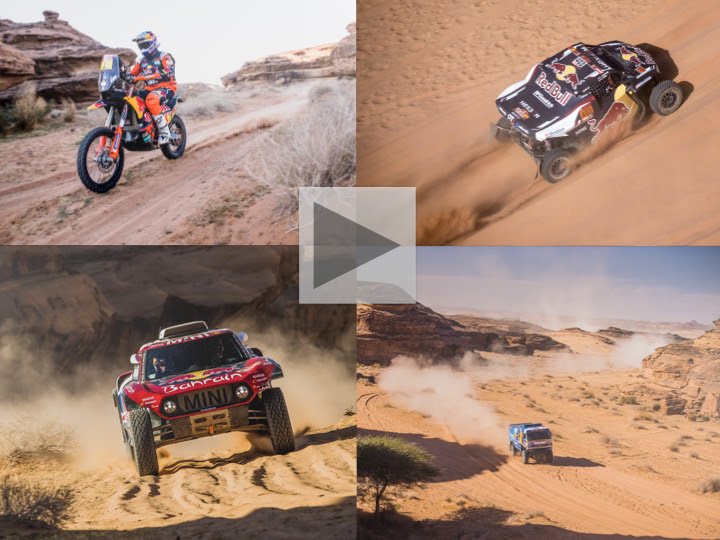 Former champions both exited and returned to the 2020 Dakar Rally on a wild Stage 5 dominated by sandy terrain. With the Rest Day in Riyadh now just one day away, we’re witnessing world class offroaders assert their authority at the 42nd edition of the world’s toughest rally.

A second consecutive stage win was achieved by Red Bull Off-Road Team USA on the 353-kilometre special between Al Ula and Ha’il. The coaching crew of Cyril Despres (FRA) and co-driver Mike Horn (SUI) thundered along in their side-by-side OT3 by Overdrive – refreshed from an enforced rest day yesterday while their vehicle underwent repairs.

“Cyril’s driving was fluid all the way. Taking the perfect headings always and that’s what saved us the time. That’s two stage wins for the team, let’s get some more!” – Mike Horn

It’s testament to the ultra-resilient mentality of both Despres and Horn that they were able to battle back from adversity to park on the top step of today’s podium. The result makes Despres the first ever Dakar competitor to win stages in the three different categories (bike, car and now SxS).

Despres and Horn are now competing in the Dakar Experience class, alongside team-mate Blade Hildebrand (USA). Hildebrand also enjoyed his best day behind the wheel of an OT3 as he set the sixth fastest time on the stage. The third OT3, driven by Mitch Guthrie Jr. (USA) – winner of Stage 4 – maintained sixth place in the overall SxS classification despite being handed the tricky task of opening the road.

Sergei Kariakin (RUS) is the new leader of the SxS contest, but the margins are tight. Third place Chaleco Lopez (CHI) is less than two minutes away from the former Dakar quad race winner.

Overnight leader of the car class, Carlos Sainz (ESP), extended his advantage by scorching over the dunes on Stage 5. The Spaniard’s second stage win of the 2020 Dakar moves him six minutes clear of Nasser Al-Attiyah (QAT) who remains his closest competitor.

“We’re all pushing hard and doing a good job so far. The car is working well.” – Carlos Sainz

Third on the stage and staying third overall is Stéphane Peterhansel (FRA). The 13-time Dakar winner managed to keep himself in contention despite being tasked with opening the stage, alongside his stand in co-driver Paulo Fiuza (PRT). Peterhansel is now 18 minutes back from fellow Mini Buggy driver Sainz.

“It was a big change in terrain today. The first part of it was stones and rocks again, but towards the end we were in the sand dunes. This made the navigation tricky.” – Toby Price

The news was much less positive for Sam Sunderland (GBR), the fourth member of the Red Bull KTM Factory Team. The 2017 Dakar winner crashed out of the race 187 kilometres into the timed special stage while setting the day’s second quickest time. We wish Sam a speedy recovery from the back and shoulder injuries he has sustained.

Mohammed Balooshi (UAE) is still in the hunt to improve on his 25th place finish at last year’s Dakar. However, his task was not made any easier today when he ran out of fuel 25 kilometres from the end of the stage. Thankfully another competitor was able to lend him some gas – the spirit of the Dakar is still going strong in Saudi Arabia! Balooshi is placed alongside CS Santosh (IND) in the Top 50 of the bike race with both targeting a move up the leaderboard in the second week.

“A really tough day and I’m glad to make it to the finish. I’m finally starting to feel like I’m getting in the groove at this rally.” – CS Santosh

With the halfway point of the Dakar almost in sight, Team Kamaz Master are flexing their muscles at the front of the truck race. A second consecutive 1-2-3 stage result has given the Russian truckers a vice-like grip on the general classification. Stage winner Dmitry Sotnikov (RUS) was followed home by race leader Andrey Karginov (RUS), with team-mate Anton Shibalov (RUS) joining them on the podium.

“During the stage we had a puncture but we made the decision not to stop and change the wheel. We used the air pressure system we have in the cab to save some time.” – Andrey Karginov

A near faultless opening week at the first Middle Eastern Dakar continues for Ignacio Casale (CHI) in the quad class. The Chilean is chasing his third Dakar quad title, and now has an advantage of more than half an hour in his category.

“Today is when the real Dakar started. There will be really tough stages and I’ll have to be ready for them physically.” – Ignacio Casale

Tomorrow takes the Dakar convoy to Riyadh. For those competitors managing to cross a further 477-kilometre stretch of dunes there will be a well-earned Rest Day waiting for them in Saudi Arabia’s capital city.

Mike Horn: “We had a clean run today. My navigation was a little bit better than it has been on earlier stages. Cyril’s driving was fluid all the way. Taking the perfect headings always and that’s what saved us the time. That’s two stage wins for the team, let’s get some more!”

Cyril Despres: “It was our first day without any trouble on the stage. Just one flat, that’s all. We kept going until the refuelling so it didn’t cost us time to change the wheel. We didn’t know we were leading the stage. I know Mike has some potential and I know that I have some potential. It’s good to know that this car also has some potential. Mitch showed it yesterday and we showed it today. It was great to have the rest of the team waiting to cheer us over the line.”

Mitch Guthrie Jr.: “This was our first stage with lots of sand. It was really long and just the same thing for 250 kilometres. I was eating so much dust. We’re just happy to get to the finish line on a stage like this. We learned a lot today about how to set up the OT3 for the sandy stages that are still to come.”

Chaleco Lopez: “It was nice in the sand today. I was unlucky for the last 100 kilometres of the stage because I lost traction in the rear. I thought that we may have snapped a chain, but thankfully we could make it to the finish.”

Carlos Sainz: “We started OK, but then we had a puncture before the first checkpoint. The last part was fast and bumpy. We managed to catch Nasser (Al-Attiyah) in this section. We finished the stage together. We’re all pushing hard and doing a good job so far. The car is working well.”

Nasser Al-Attiyah: “It was a good stage for us. I think the route was suited more to the buggies than our 4×4. We just did our best to keep going. We had just one flat tyre near the end. I’m happy to finish day five without any major problems. It was lots of camel grass today, I think the dunes will start next week.”

Stéphane Peterhansel: “We were opening the road for the first 80 kilometres until we got a puncture. Nasser (Al-Attiyah) overtook us when we were fixing that. The second part of the stage was really sandy, lots of camel grass and some dunes. We got a second puncture there and then Carlos (Sainz) came past. We tried to follow him, he was pushing a lot. Then we caught up with Nasser and the three of us finished the stage together.”

Giniel De Villiers: “It was a hard stage on the neck because it was very bumpy out there. We had a clear stage with no punctures. The car was good and we were able to come through at a nice pace.”

Kuba Przygonski: “The last part had so many jumps over the sand and camel grass. We were pushing where we could, trying to find the limit of what we can do. We’re happy to get through another tough day at this Dakar.”

Toby Price: “It was a big change in terrain today. The first part of it was stones and rocks again, but towards the end we were in the sand dunes. This made the navigation tricky. I got caught out by one square edge that kicked me off. Luckily I was able to get back on and I’m looking to stay healthy for the rest of the race.”

Matthias Walkner: “It was quite a tough day with lots of off-piste riding. The opening guys did a really, really good job. Everybody was following the line. I was happy with my rhythm. It was tough to ride after seeing Sam had crashed, I hope he’s OK.”

Luciano Benavides: “Today was better than yesterday. There was no navigation mistakes. It was a very physical stage and I was in the dust passing many riders. Halfway through the stage I had the second quickest time, but near the end I got very tired. My speed dropped and I focused on staying safe. I ended the stage in the Top 10 so that’s good for tomorrow.”

Laia Sanz: “I’m happy to arrive safe. I didn’t take any risks. I was not so fast, but this stage was really hard and it was easy to crash. I’ll try to rest tonight and go again tomorrow.”

CS Santosh: “This was one of the most physically demanding stages I’ve ever ridden. We rode about 150 kilometres in the sand and camel grass. A really tough day and I’m glad to make it to the finish. I’m finally starting to feel like I’m getting in the groove at this rally.”

Andrey Karginov: “During the stage we had a puncture but we made the decision not to stop and change the wheel. We used the air pressure system we have in the cab to save some time. This made things a little bit dangerous because it started to have an effect on our braking, especially on the steep descents. Apart from this I enjoyed driving on the sand, I found the terrain quite familiar.”

Ignacio Casale: “My aim was to avoid losing too much time to my rivals. I think I rode a good stage. Today is when the real Dakar started. There will be really tough stages and I’ll have to be ready for them physically.”