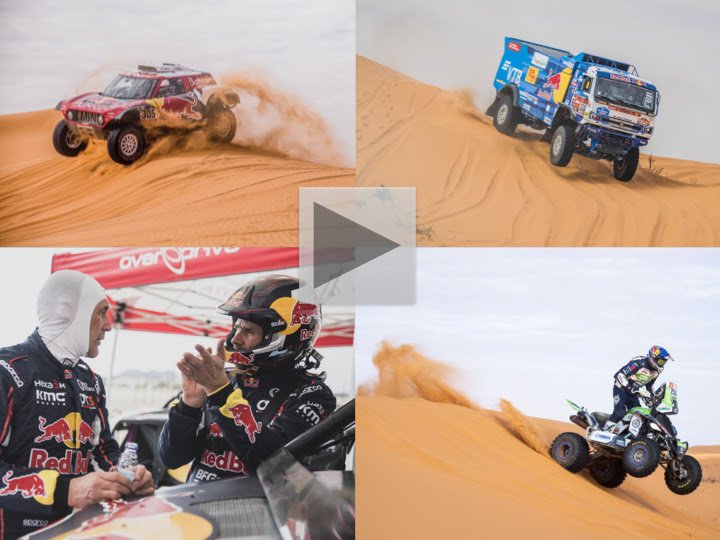 The 2020 Dakar Rally has taken competitors on a gruelling 3,700km route between Jeddah and Riyadh, and we’re only at the halfway mark! The offroaders that remain in the race will now take a well deserved Rest Day before tackling six more challenging stages before the chequered flag falls in Qiddiya.

The first week of the inaugural Saudi Arabian Dakar concluded with a dash over 352 kilometres of sand dunes between Ha’il and Riyadh. The pace was relentless as competitors jostled for position in the open desert.

The three-way battle between Dakar legends Carlos Sainz (ESP), Nasser Al-Attiyah (QAT) and Stéphane Peterhansel (FRA) continues to intensify in the car race. On Stage 6 it was the turn of Peterhansel to lead home the frontrunners, but Sainz and Al-Attiyah were both able to minimise any lost time.

“Today’s rhythm was fast, slow, fast, slow. In the high speed sections you needed to really concentrate. It’s not so much physically tiring as mentally exhausting.” – Stéphane Peterhansel

Two-time Dakar winner Sainz has the overall lead of the car category, a position he has held since the conclusion of Stage 3. Sainz’s fellow Mini Buggy driver Peterhansel is third in the general classification, 16 minutes behind his team-mate. Sandwiched between Sainz and Peterhansel is reigning Dakar champion Al-Attiyah, less than eight minutes off the overall lead.

“I lost a little bit of time in the last part of the stage, but not too bad. Opening the road is not easy so I’m happy with the result today. Now I need one Rest Day.” – Carlos Sainz

Elsewhere in the car race, 2009 Dakar champion Giniel De Villiers (ZAF) is chasing a ninth podium finish at the world’s toughest rally. Meanwhile Kuba Przygonski (POL) will be happy to see the back of an unfortunate first week at the Dakar.

In the side-by-side race there was a return to top spot for defending champion Chaleco Lopez (CHI). Lopez finished ahead of yesterday’s stage winners Cyril Despres (FRA) and Mike Horn (SUI) by seven minutes. A breakdown in communications didn’t make Despres and Horn’s work any easier on Stage 6.

“The special stage was long today. It started really badly because we lost the intercom after 10 kilometres. After that we were communicating using sign language.” – Cyril Despres

Despres and Horn’s team-mates Mitch Guthrie Jr. (USA) and Blade Hildebrand (USA) both got through the stage to ensure all three of the OT3 by Overdrive machines will start the second half of this Dakar. Guthrie Jr. is leading Red Bull Off-Road Team USA’s podium challenge, the Dakar debutant is currently fifth overall in the SxS contest.

“Today was a lot of dunes. It was fun and I felt right at home, it was like Glamis, California out there.” – Mitch Guthrie Jr.

Overnight leader of the bike race, Ricky Brabec (USA), was able to increase his advantage over the chasing pack. Brabec will be hoping to avoid another second week retirement, the fate that has met him at his previous three Dakar outings.

Looking to reel in Brabec when the Dakar gets back underway on Sunday will be the Red Bull KTM Factory Team riders; Toby Price (AUS), Matthias Walkner (AUT) and Luciano Benavides (ARG). These three bikers are all placed in the Top 10, with two-time Dakar winner Price best placed in third overall despite a tough end to Stage 6.

“Around the 400-kilometre mark my rear tyre fell off. I don’t know why it happened. Andrew Short gave me his wheel so I didn’t have to ride in on the rim. It wasn’t the best day, but that’s how it goes sometimes.” – Toby Price

The targets are different for Laia Sanz (ESP), CS Santosh (IND) and Mohammed Balooshi (UAE) as the trio look to build on a solid first week of riding to pursue personal best finishes at the Dakar.

“I think this is the first day I can really enjoy because the other days I was a bit in the dust. Now I’m looking forward to the Rest Day.” – Laia Sanz

It was a bittersweet Stage 6 for Team Kamaz Master. Race leader Andrey Karginov (RUS) was able to increase the gap between himself and nearest rival. However, five-time Dakar winner Eduard Nikolaev (RUS) was forced to retire from the rally due to insurmountable technical issues.

“The dunes were small, but I think that’s a good way to prepare for what’s to come. In the second week of this Dakar we’re expecting huge dunes.” – Andrey Karginov

The most straightforward first week at the Dakar belongs to two-time quad race champion Ignacio Casale (CHI). The former bike, truck and SxS Dakar entrant has given himself a 35-minute cushion at the head of the quad race going into the rally’s second week.

“My strategy is to maintain the gap I have in the general standings. I’m very happy with the job I’ve done up until now.” – Ignacio Casale

Tomorrow’s Rest Day maybe not be as relaxed as it sounds. Competitors will work alongside engineers and mechanics to ensure their vehicles are in the best shape possible to conquer the remaining 4,000 kilometres still to be navigated in Saudi Arabia. Then an early start beckons on Sunday as the rally gets back underway with a monstrous 546-kilometre special stage that takes the convoy to Wadi Al-Dawasir.

Carlos Sainz: “I lost a little bit of time in the last part, but not too bad. Opening the road is not easy so I’m happy with the result today. The terrain was interesting, very fast in some places. We were crossing dunes and also on sandy pistes at times. Now I need one Rest Day.”

Nasser Al-Attiyah: “I’m a little disappointed because we’re really going at our maximum and still we’re not catching the buggy. We need to do a really good job in the second week. Things will get tougher, but we’re ready for this.”

Stéphane Peterhansel: “Today was a long special stage, 477 kilometres. The rhythm was fast, slow, fast, slow. In the high speed sections you need to really concentrate. It’s not so much physically tiring as mentally exhausting.”

Giniel De Villiers: “Very fast stage, flat out with a lot of crossing of dunes. We were full throttle for maybe one hour today. Some of the dunes were quite nice to drive. In other parts we were in the valleys. Some dangerous jumps sometimes. A tough stage.”

Chaleco Lopez: “Tomorrow we’ll be working for next week for the final part. Every day has been good so far and I’ve reached the finish. It was a very strong first week. The two first days were very rocky, very tough and very difficult.”

Cyril Despres: “The special stage was long today. It started really badly because we lost the intercom after 10 kilometres. After that Mike (Horn) and myself were communicating using sign language.”

Mike Horn: “The stage was 477 kilometres, but for us it felt even longer because we were unable to speak to each other. When we can speak to each other we can motivate each other. Getting this message across with the hands is a bit more tricky. Just at the end we unfortunately had a flat tyre and lost a couple of minutes changing that. In general, the buggy is doing well.”

Mitch Guthrie Jr.: “Today was a lot of dunes. It was fun and I felt right at home, it was like Glamis, California out there. It was a long day, long liaison and stage so it’s great to get over the line. I was going really well, but then I had a couple punctures. Even with that we kept up a good pace. I’m happy with how the first week has gone. The mission is to get this thing to the finish and now we’re halfway there.”

Toby Price: “The stage today was going really good. We were navigating well and were only losing a little bit of time on the guys who were starting behind. Unfortunately, around the 400-kilometre mark my rear tyre fell off. I don’t know why it happened. Everyone else on our team ran the same tyre and they’ve all made the finish line. Andrew Short gave me his wheel so I didn’t have to ride in on the rim. It wasn’t the best day, but that’s how it goes sometimes.”

Matthias Walkner: “It was a really tough day and I’m happy that the Rest Day comes next. Until now every stage has been really tough. The guys in front have been able to go fast and avoid mistakes. Things can change very quickly at the Dakar so I’ll just keep doing my best each day. Right now Honda are in front, but it was more or less the same last year. Right up to the last stage there’s the chance to get back lots of time. Nothing is decided until we reach the finish line.”

Luciano Benavides: “I enjoyed today’s stage, it was faster than yesterday. In the first part I was riding in the dunes with my brother. We were pushing each other. Then his engine broke and he stopped so I’m feeling bad for him. This is a long Dakar and many things can still happen. My plan for the second week is to stay calm and focused, and finish all the stages.”

Laia Sanz: “I had a good day, I like this kind of terrain. It was dunes, but it was also fast. I think this is the first day I can really enjoy because the other days I was a bit in the dust. Now I’m looking forward to the Rest Day.”

Mohammed Balooshi: “I’m feeling totally finished with my body. I really don’t know how I got to the end of this stage. Whenever I was feeling tired I kept reminding myself that tomorrow is the day off. With that in mind I just kept giving it 110 percent. You need to have a strong head on your shoulders to do this Dakar because you never know what it will throw at you.”

Andrey Karginov: “We were going very fast today with no problems. The truck worked great and our navigation was good the whole way. The dunes were small, but I think that’s a good way to prepare for what’s to come. In the second week of this Dakar we’re expecting huge dunes. We’re in a good position at the Rest Day.”

Anton Shibalov: “It was good to be away from the big rocks we’ve been driving through on the other stages. On the sand I don’t have to pay so much attention to looking after the tyres because the risk of punctures is much lower. Now we’ll use the Rest Day to prepare for six more difficult days. The team has put itself in a good position.”

Ignacio Casale: “I’m happy with my result even if I did have a few problems, including an impact with another competitor. After that, I broke my exhaust and I lost my rear brakes. That said, I still managed to ride a good stage. My strategy is to maintain the gap I have in the general standings. I’m very happy with the job I’ve done up until now.”