Once Racers Descend into the Valley, the High-Speed Chase Can Commence

Teams had the sense they’d been there before. The steep climb, the rocks and barren trees, the water crossings. As if Special Stage One just wouldn’t relent. A welcome sight for some, and the sign of a grueling day for others. But this longest day of the Yokohama Sonora Rally, presented by Method Race Wheels, wasn’t going quite according to plan. Storms had mutated the land so much the route was unrecognizable enough to the organizers to cut Part One of Stage Two in half. These same systems caused competitors to snorkel through the finish just yesterday. And even abbreviated, the early mountainous section of the day’s challenge would cake the race vessels in mud by its end. But not before picking up the pace – a lot. What better way is there to burn off some steam (and maybe dry out your gear) than to turn up the heat when the road opens up? 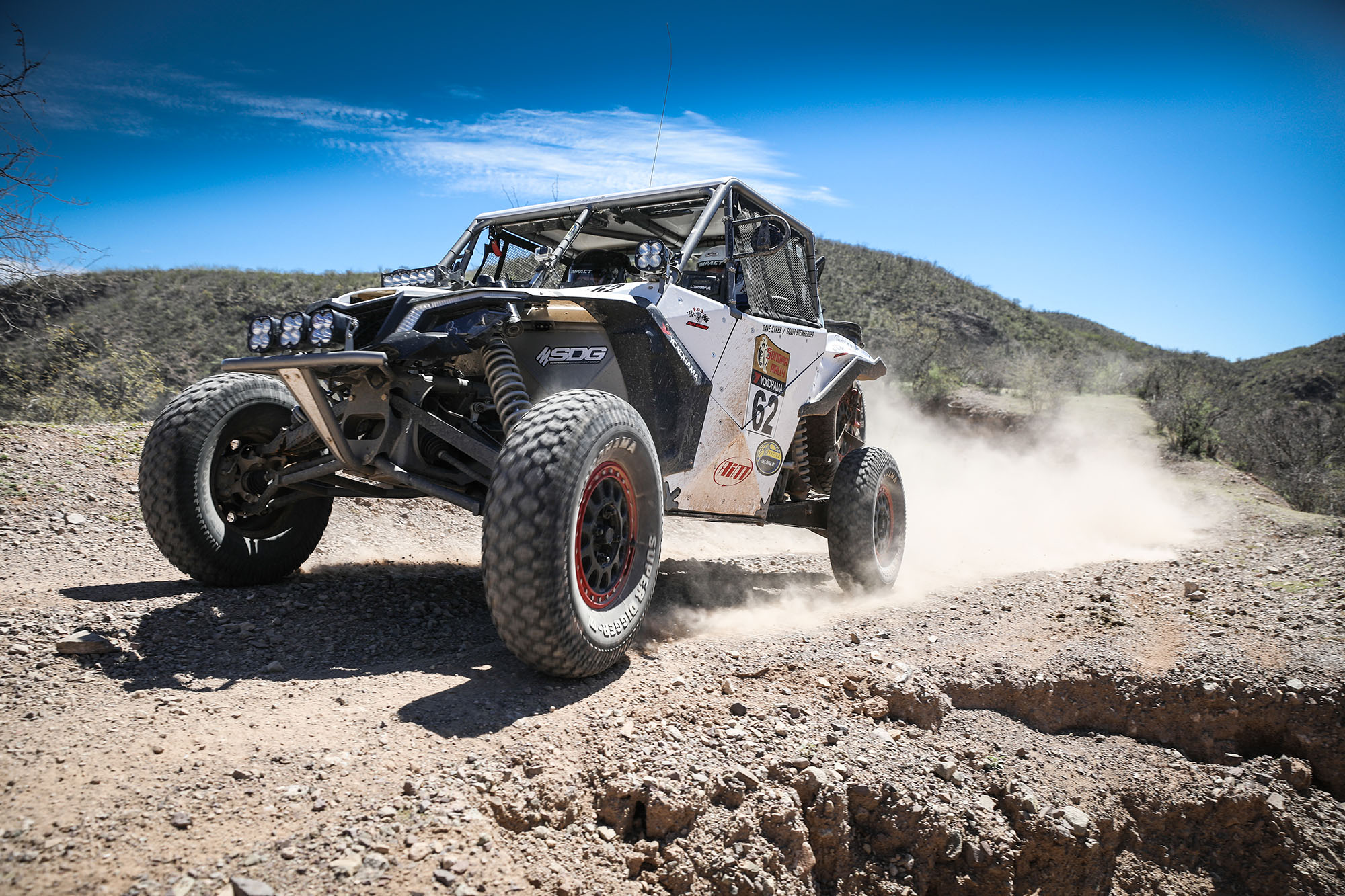 UTVs took full advantage of the speed after crawling over the sage brush covered sierras in the morning, a factor that could explain the early roll-over in the last 10 kilometers of the first section. George LaMonte had hoped to top out at 110 mph, but settled for a humble 105… Just a hair faster than the 80 or so mile-per-hour maximums his opponents were managing. Sara Price #78, along with Co-Pilot Kellon Walch, treated this next phase of SS2 more like the Score series – going head to head with anyone resistant to move aside. However, the trials don’t start and end with the momentum. A lesson learned by everyone who made it to Timing & Scoring in Cábora. It’s about consistency, which is how Price stayed on the proverbial podium, falling a little into Third. And wit, a trait the second stage’s 1st Place holder Dave Sykes #62 suffers no shortage. Despite an endless string of setbacks now in his rearview, determination is what kept Nick Bruce & Cam Muldner’s #71 skin in the game this time, landing a solid Second Place finish. 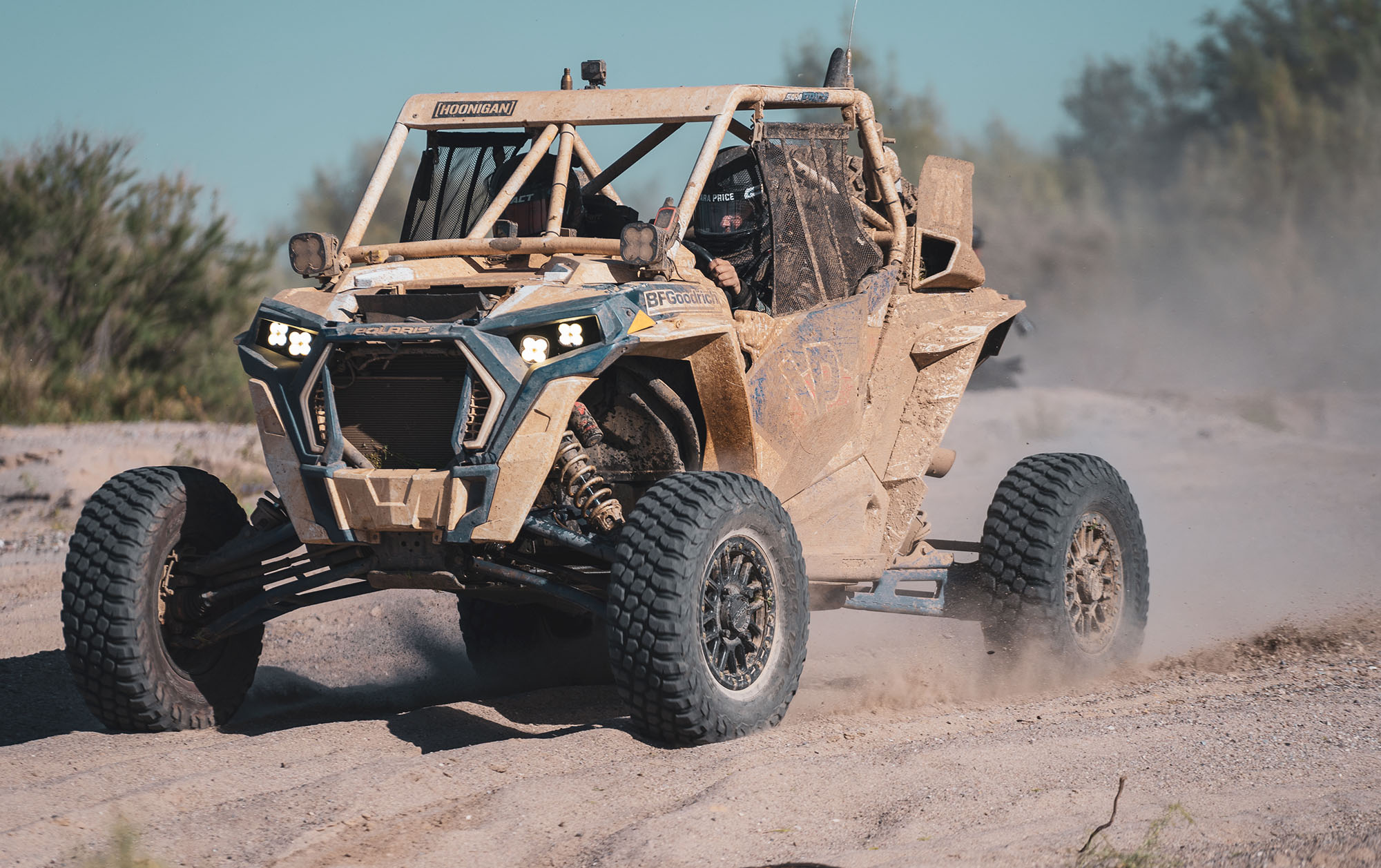 “[Special Stage Two] was a little bit more of a learning curve for me. We had some navigation things come into play, as well as being in close racing conditions. So, it was hard to get the Racer side out and the Rally side in, but this is all about learning and learning that form of navigation racing. The whole rally itself has been completely incredible. One Day One, we got Second Overall – we were the fastest UTC, but we got penalized in some speed zones…Hopefully we cleaned that up some, but [nonetheless] it’s awesome! I absolutely love rally. Thanks Sonora Rally for having us out here.” – UTV Pro Sara Price #78 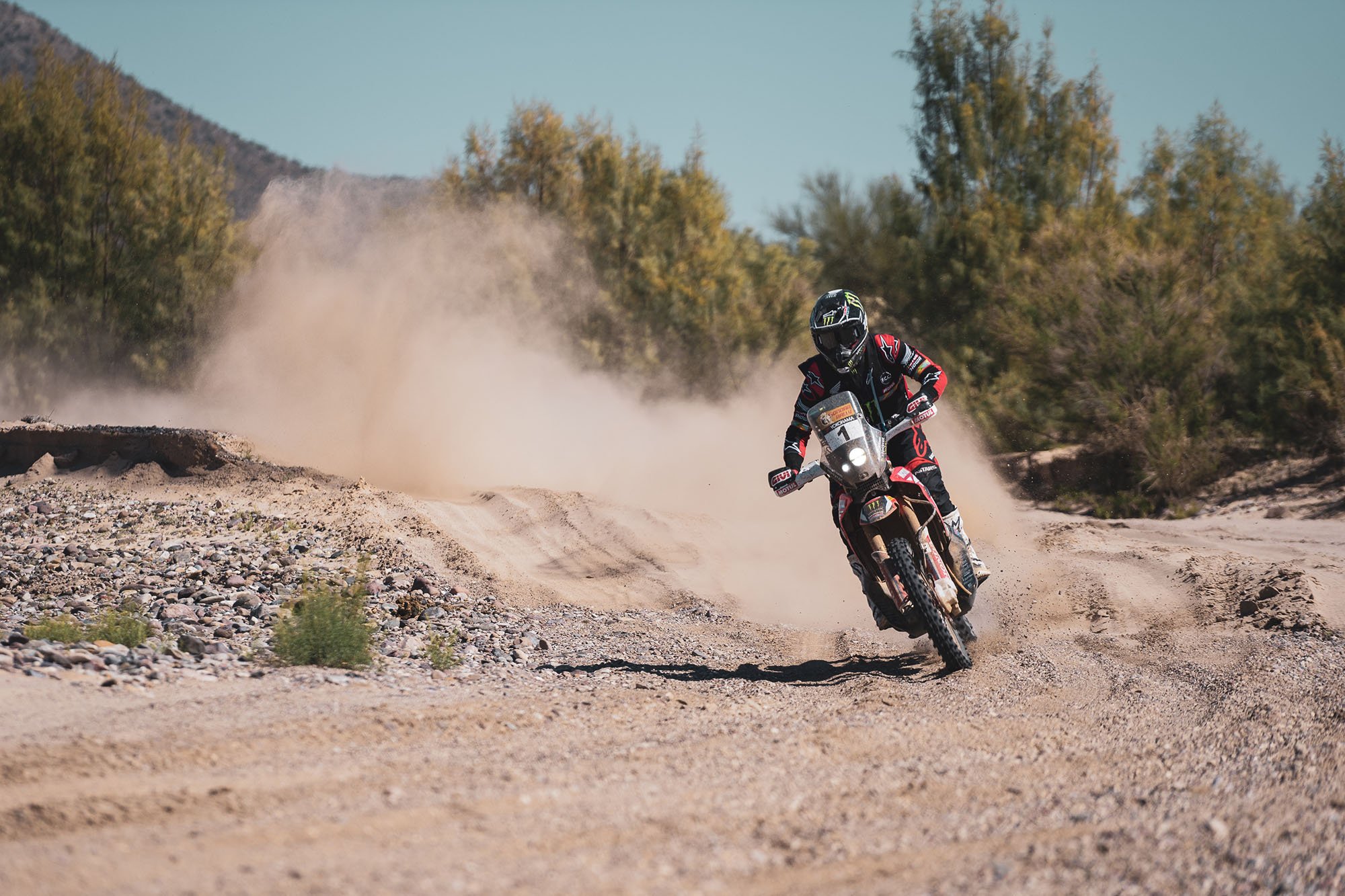 Where the path during the first part of the stage was rugged, narrow, unsteady and a bit damper than anyone desired, the latter half revealed a smooth, slick network of ranch roads – and cattleguards – offering innumerable options for travel (and equally endless opportunities to become lost). This is where the battles were waged between the premiere riders. Although Ricky Brabec #1 ultimately won the round, Skyler Howes #2, taking the next step down in the ranks, kept a firm grasp on First Overall. Comrade Colton Udall #4 gave them both hell in the mountains, an effort paying off with the 3rd seed in the general Ranks, but it was baby-faced newcomer, a 17-year-old Mason Klein #11 who really shocked the crowd. Unfortunately, the rookie is still getting the hang of his roadbook – only taking his first rally course with the organization earlier this year – which resulted in a DNF after one or two wrong moves took him way off course on Monday. But eager to gain experience, he tried again, figuring out his mistakes well enough to explode past an unsuspecting crowd onto the Third step. Klein might not be in the official running any longer, but he’s a rider to keep your eye on. 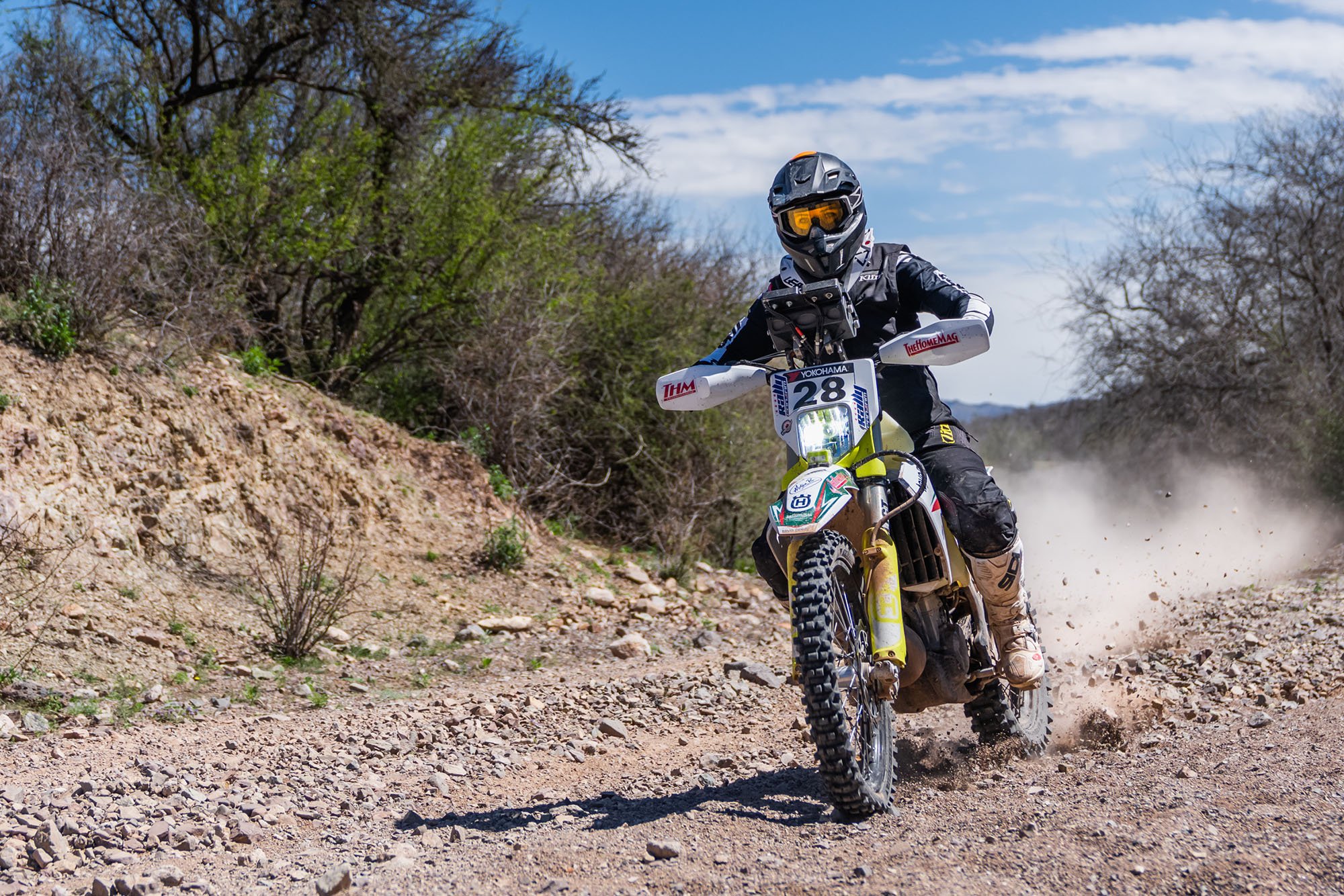 With so many talented athletes in the lineup, and still a few days left to give it their all, the winners of the 2020 Sonora Rally could come as a shock. South Africa’s finest, Taye Perry #28, continues to claw her way up the cue, starting Special Stage 3 at 7th. While leader of the ADV class, competing on a KTM 790 Adventure, Wes VanNieuenhuise #5, handles his “big bike” like it’s a 125cc two-stroke. He makes the difficult task of maneuvering technical trails look as easy and graceful as a ballerina makes her leaps look effortless. Maybe that’s why he’s continually finishing at the front of the pack, going strong in 5th Overall. But today is all about the dunes, and the racers took an early start to avoid a system headed straight for western Sonora as they blast a path in the sand to Puerto Peñasco. The race won’t become any less arduous over the coming stages, so it’s only a matter of time for the most refined racers to be sifted out. 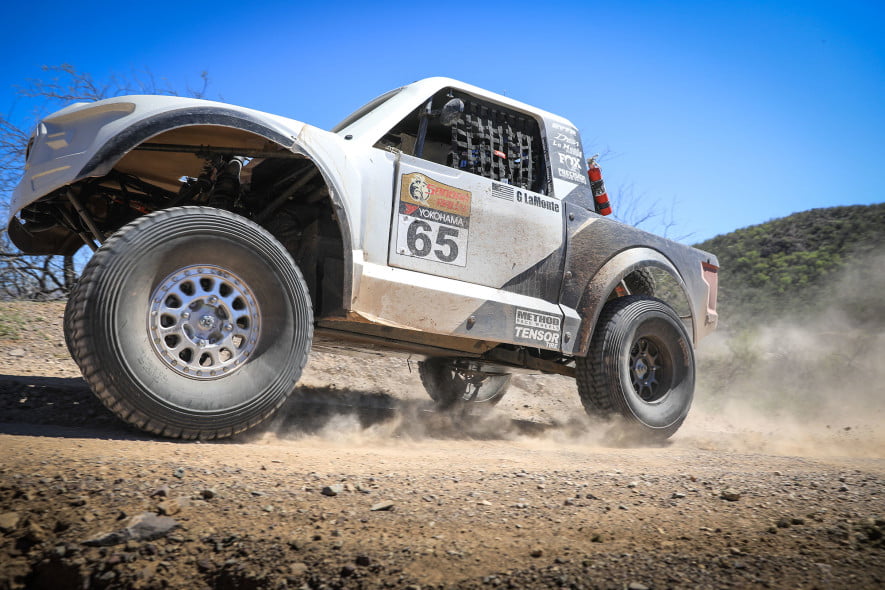 Cábora, of the Municipality of Quiriego, consists mainly of ranch lands, with horse mounted “Vaqueros” visible from the highways as they guard their herds. These same ranchers are those who welcome the Yokohama Sonora Rally through their vast properties, allowing the race through closed gates during every stage. Sonora as a whole is known for its free-range cattle, as one might be able to tell when traversing the rolling hills, massive plains and desert floor, or dry, bushy highlands all perfect for grazing.

Unlike in Baja California, another hub for off-road racing, a large percentage of Sonoran roads or trails which the rally runs as the racecourse on are rarely used, even by locals. Some of these paths are completely abandoned, 90% of which have gone back to nature. These are considered “faint roads” to the locals because they are almost impossible to see, even as they are being traversed. 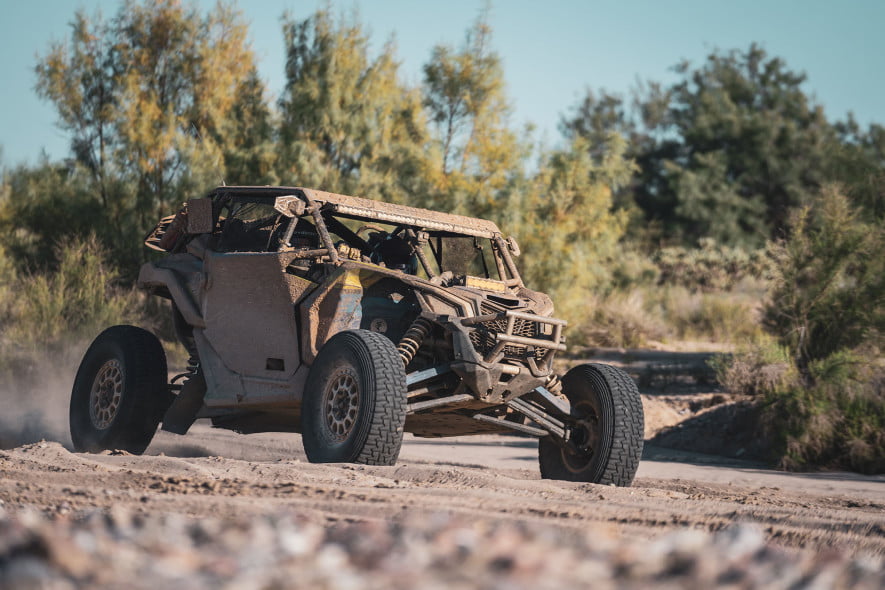 Road to Dakar Top Five Results as of SS2:

Can you believe that guy is 18yo? I met him at the Parker 250 and he uses my push-button hydration system. He's an amazing young man with a great future. I look forward to following his progress in the years to come. 3 third place finishes in a row.
Push-button hydration
https://liquidaider.com
FB & Instagram @LiquidAider
You must log in or register to reply here.
Share:
Facebook Twitter Reddit Pinterest Tumblr WhatsApp Email Link