Weather seems to be playing a bigger roll in this race than expected. Even when gloom isn’t present – even though it’s been gone for days – the impact of inclement weather lingers like a slow healing gash, especially here, in a region so wild, the only one dressing wounds is Mother Nature. Special Stage Three offered a different sort of impending danger. More direct. A storm was coming, so the Yokohama Sonora Rally, presented by Method Race Wheels, had to triage. First, the competitors started the day a bit earlier to try and beat the rain between Caborca and the next bivouac in Puerto Peñasco, which almost worked. And those who still became caught in the wet were watched closely. Then, they decided to cut out the second section which would have edged the Sea of Cortez coastline after a multifaceted voyage through the Sonoran Desert. It would have been a beautiful sight, but nobody knew what was in store, so no one missed it. All they knew was that now the race finally reached the dunes… 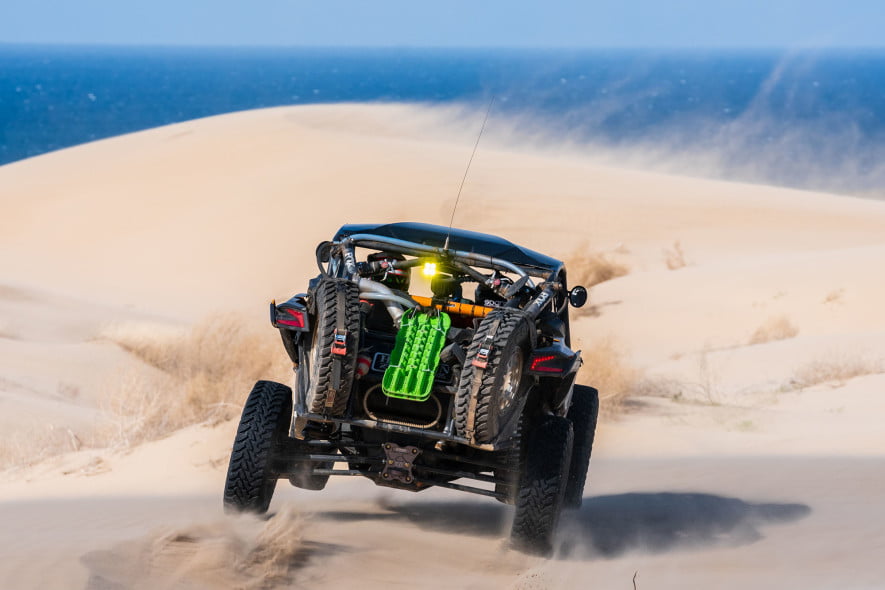 The wind howled all day. It slid across your face like a pumice stone adding icing to the multilayered cake of obstacles. When vessels weren’t buried below rows of wiry trees and blooming Seguaro, they darted over featureless mounds of sand catching glimpses of navy blue in the distance. It was the typical windswept Sonoran dunes, overlooking the sea and encompassed by sierras the event had traversed in the last few rounds – many of which are now a sawtooth silhouette in the distance. For each class so far, the battles have been quite close, concluding with mere seconds to determine the current, relatively unexpected, conquistadors. Skyler Howes (2) again beating out HRC’s Dakar Rally hero, and favorite in Motos, Ricky Brabec (1), for 1st in the stage. Sara Price & Kellon Walch (78), technically rookies in this form of motorsport, securing their spot at the top step in UTVs. And by the start of Stage Three, both Howes and Price are leaders overall. 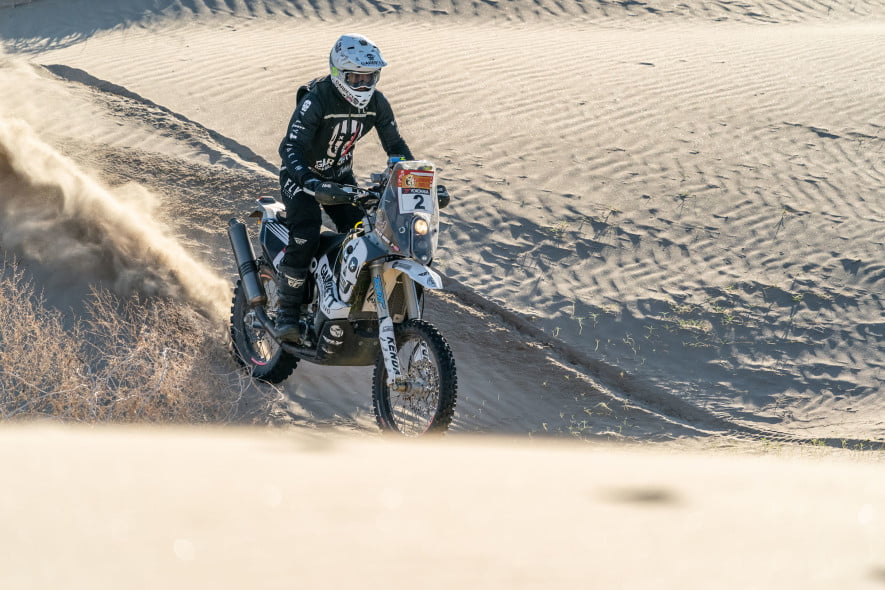 “Today was everything I love packed into one stage. Fast, twisty, sandy trails through cactus. Dunes with tricky navigation…It had it all! I was having a blast just riding my dirt bike and ended up going fast enough to win the day, which is awesome. Leading out in the big dunes tomorrow is not ideal but still should be a fun day. That’s what I’m all about: keeping it fun.” – Leader in MOTO Pro, Skyler Howes (2) 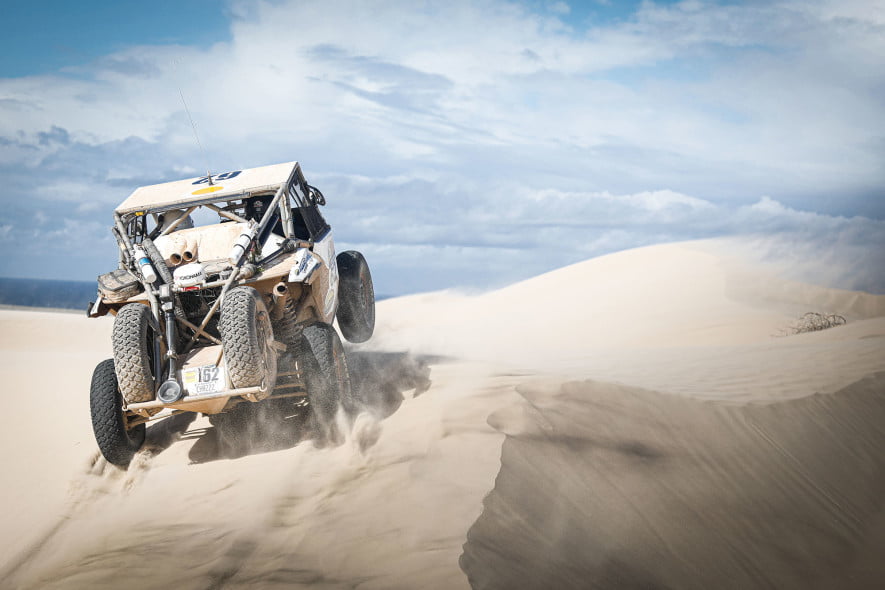 But victory can be bittersweet, as fast as you can grab hold, it slips away – like the terrible blow Dave Sykes & Scott Steinberger (62) endured when they ultimately were forced to throw in the towel after landing in the Winner’s Circle in SS2 just the day before. George LaMonte and co-pilot Tony Albano (65) also suffered malfunctions during the special which brought their official race to an end. With a few key players out of the running, Oscar Ramirez & Marc Scola (77) saw an opportunity to drive their Can-Am into the stage’s second spot, while Lee Banning & Robert Ruiz shook things up a bit, taking third in the UTV class. Mexican favorites, Luis Pelyao & Abelardo Ruinova (63) fell back to 4th – still comfortable in the 2nd seed overall – followed by his Monkey Business teammates Jorge Cano & Alfonso “Poncho” Alonzo (72) closing off the Top Five in SS3.

Wednesday set off on fast roads, not unlike the rancher passageways the day before. Then, those straightaways became wide, slippery switchbacks through the desert floor. But even in the open, at maximum velocity, the perils appear quicker and weigh-in heavier. Low-lying, poisonous cacti hid in plain sight to punish anyone who veered off the path. Many riders pulled needles out of their gear all the way to the bivouac. Deeply rooted camel grass became more prevalent as the rest of the vegetation thinned out approaching the water. And just when they were starting to feel comfortable pushing the limits, the zig-zagged washes narrowed and grew wild again. Taye Perry (8) faced several challenges, one being a shortage of gas. This seemed to be a trend amongst riders, but the 5-foot-two “Iron Lady” may have been at a disadvantage. She did her best to maneuver her machine through slick, with some help here and there, to refuel and keep going, but the complication held her back in the rankings placing her just outside of the Top Ten. She rolls off the start in 12th for Stage Four. It wasn’t all bad for Motos, however, Wes VanNieuenhuise (5), despite his own setbacks, still managed Sixth on his ADV bike. Mike Johnson (8), founder of Rally Comp, helped guide his racing comrades through their rally computers in the morning, yet somehow upheld his reputation to casually and quietly dominate the first three to five rungs of the ladder (taking 4th). And although it’s an unofficial score, “the Kid,” Mason Klein (11), has given an outstanding performance since his DNF on Monday, standing once more on Moto’s Third Step both in the Stage. [Insert hooting and hollering] 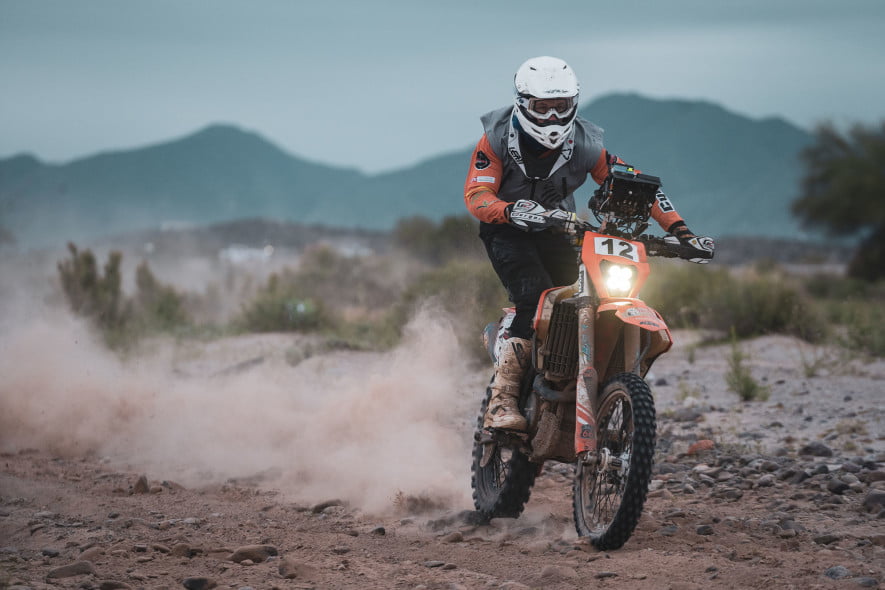 The race pulled people out of the mountains and into two sections of dunes: inland and coastal. When the vehicles entered the western half, they began drawing a series of 5km righthand turns through what’s labeled as HP [read: uncharted territory] in the roadbook. No roads. No markings. No frame of reference to indicate one’s exact location. Here, nothingness is the greatest challenge. Khaki colored granules, at the right time of day, leave no shadow or indentations, no warning of a sharp drop off. And in these small, square cut hills, pilots discovered this the hard way – mostly the motorcyclists. Even amongst the more experienced riders, unidentifiable drop-offs threatened to launch the unheeding. Thereafter, the route goes back into the mountains then cuts across the highway again. And even when the clouds clear and the sun shines on a new stage, the competitors will face two more several hundred kilometers of trials and tribulations meant to uncover a champion. If you know rally, then you know nothing is for sure. Maybe a metaphor for an epidemic the world is currently sharing. But what can be known about competition is the passion, the courage, drive and glory involved which make motorsports worth watching, life worth living and results worth waiting for.

Road to Dakar Top Five Results as of SS2: