And After The Rally’s First Day in the “Big” Dunes, Many, in Fact, Took a Spill

Tales are told about scenery like this: Beau Gest, Lawrence of Arabia, The English Patient. Great adventures of survival, war or wandering the earth like Kane. Dunes here in Sonora could inspire stories. Poetic in its nothingness, they aren’t only the largest in North America, but one of the most diverse of its kind – if a fluctuation of ripples and elevation can count as “diverse.” Akin to being stranded in the middle of the ocean, with no new horizons in sight, Mexico’s Gran Desierto de Altar (Altar Desert) takes isolation to new heights. Situated at the perimeter, Media crews perched themselves on the face of these granule mountains, waiting to capture one of the many pivotal racing moments between Puerto Peñasco and a GPS coordinate set just outside San Luis Rio Colorado – the final city to host a bivouac. Look one way, and the rolling features disappear, stamped flat by some god-sized sandal. And turn the other to find tawny tinted waves flowing into the abyss. Wind moves freely atop the terrain throwing the foreign sounds of petrol power this way and that, tricking photographers into taking a shooting stance when the vessel is in fact still at least 15 minutes away. And then, once waiting has killed the anticipation, cameras now idling, a motorbike or Side-by-Side explodes over the crest nearly overhead, hell-bent on sticking the landing on top of whatever in its way. 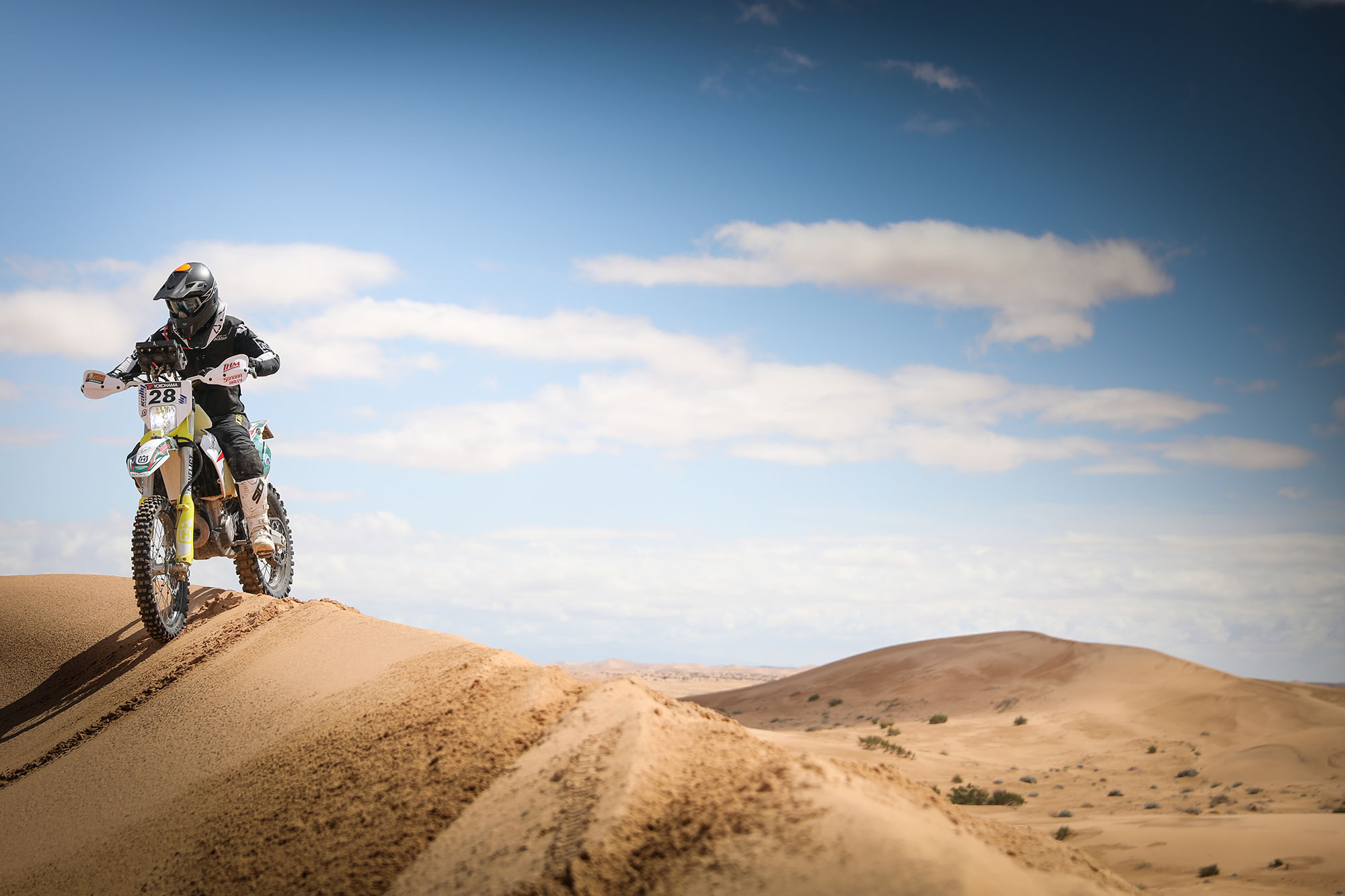 “Today’s dunes and sand were amazing, but it’s a pity I couldn’t really race them. I had to be conservative of my fuel after running out and having to push my bike [about two kilometers] to the finish yesterday. But I’ve never seen dunes like here in Mexico. And the choppy, sandy [erg] was fun – and demanding. And the rain made the sand so fun and so fast, it was just an incredible experience!” – Rally PanAm rider, Taye Perry (28) 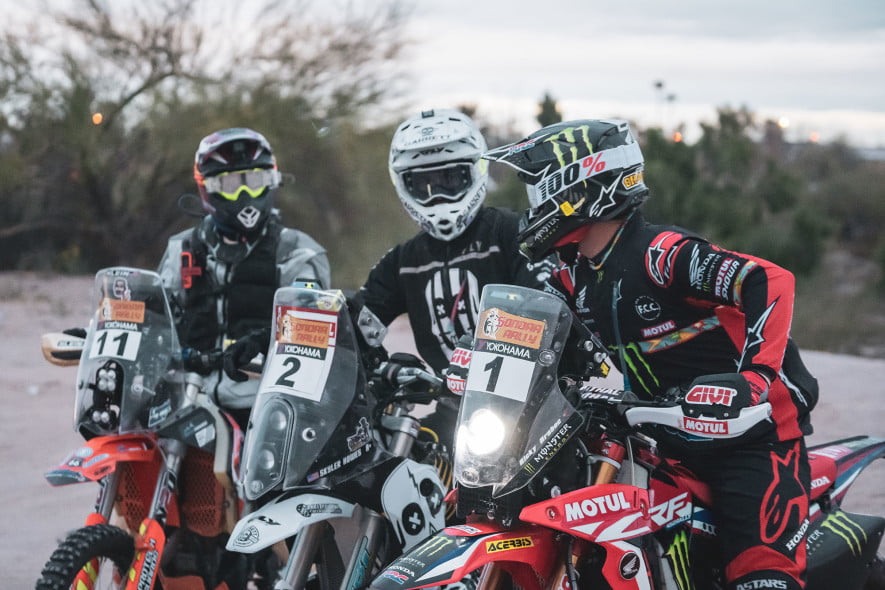 Special Stage Four was as much a treat as it was a threat. Fresh, wet sand set the stage for a blistering tempo. Bikes soared across the barren sea, mindful of the crab grass pockmarking the way. One long look at the roadbook could send a rider flying off their bike when one of these desert weeds pops into the path unseen. Board leader, Skyler Howes (2), endured a few mishaps himself trying to navigate the field of landmines while giving chase to comrade Ricky Brabec (1), who’s still got a keen eye on the Winner’s Circle. SS4 saw them switching ranks with Brabec grabbing 1st – putting him closer to his goal. It’s a shame 17-year-old Mason Klein (11) is unlikely in the running for a podium finish, all due to his humbling display on the first special which set him back an extra hour. Because his impressive performances in the rounds that followed is a staggering contrast. Holding three consecutive positions at 3rd, his crusade has brought him up to 17th overall out of the remaining 33 athletes in Moto. French-Canadian competitor, Brigitte Lacombe (29) made a valiant effort to maintain momentum with a waning vehicle, pushing it into Timing & Scoring on more than one occasion. But it had had enough, and alas, she’ll have to sit out Day Six. For Billy Trapp (31), the race ended in a severe off-bike mishap – which had sent him straight to the medics for immediate attention. Luckily, the Red Cross cleared him of any substantial injuries, so he’ll be able to travel home at his leisure. Now, whether the border patrol will give him (or anyone) the same authority is still in-question. 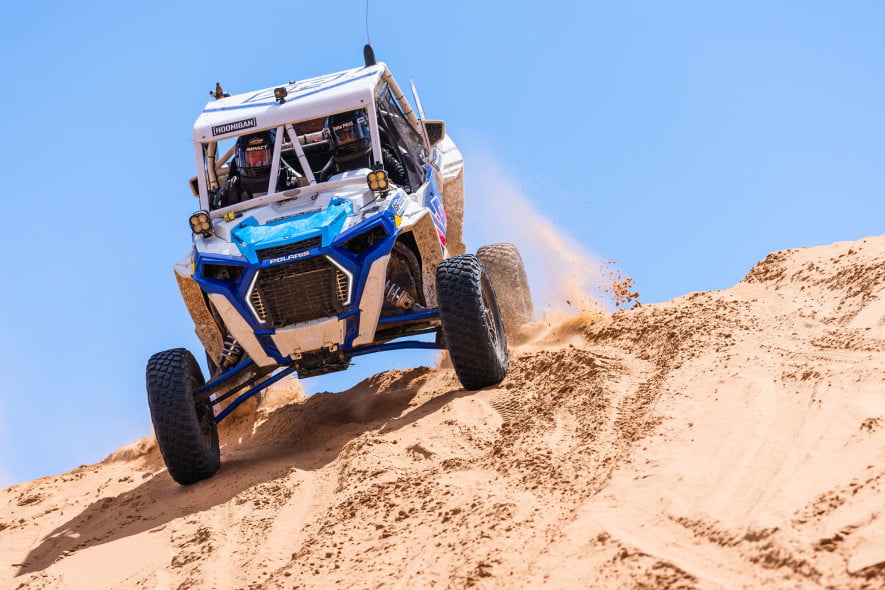 The Yokohama Sonora Rally is alarmingly close to ending. Too soon, if you ask anyone in the camp. So, you can imagine the penultimate stage will reach a deafening crescendo for every team involved. Full of surprises, SS4 meant termination for Challenge Rallye du Maroc hopefuls Luis Pelayo & Abelardo Ruanovai (63) who suffered an irreparable tumble down a rather massive mound of sand. Their teammates Jorge Cano & Alfonso Alonzo (72) cartwheeled off the same cliff, but miraculously saved their machine enough to push onto the last heat. As far as Cano is concerned, this is still the “best racing experience ever!” George LaMonte & Tony Albano (65) struggled to keep their baby Raptor “truck” alive on the racecourse for two days. But, the tired UTV took its final breath one stage too short, sending them to the sidelines alongside friendly rivals, Cameron Ornelas & Kevin Heath (73) whose race concluded similar to Pelayo’s: ass over teakettle. The playing field thinned ever further for drivers like PJ Jones & Kyle Vestermark (64) who won the second seat, Oscar Ramirez & Marc Sola (77) nabbing the succeeding spot and overall front runners, Sara Price & Kellon Walch (78) soldiering onto Special Stage Five. Nick Bruce & co-pilot Cam Muldner (71) made great time again, and with the herd thinned since the previous day, they finished the circuit stronger than ever at 1st in the UTV class. They beat out a pack of quality drivers, but does this seal the deal for a 2020 Sonora Rally victory? There’s still one more day, and in rally, one’s fate could be changed in just a few kilometers. And with Price, Jones, Ramirez (among others) hot on their tail, it would be a mistake to underestimate a team’s will to win… Or a competitions fickle nature for that matter. After all, Second place, where PJ Jones & Kyle Vestermark (64) sit now, can be merely one missed waypoint away from First.

Road to Dakar Top Five Results as of SS4: