Ultra4 Racing headed to the woods of Tennessee this past weekend at Adventure Off Road Park in South Pittsburg for the 4WP Tear Down In Tennessee. This would be the first race in the 2020 season since the King of the Hammers back in February. 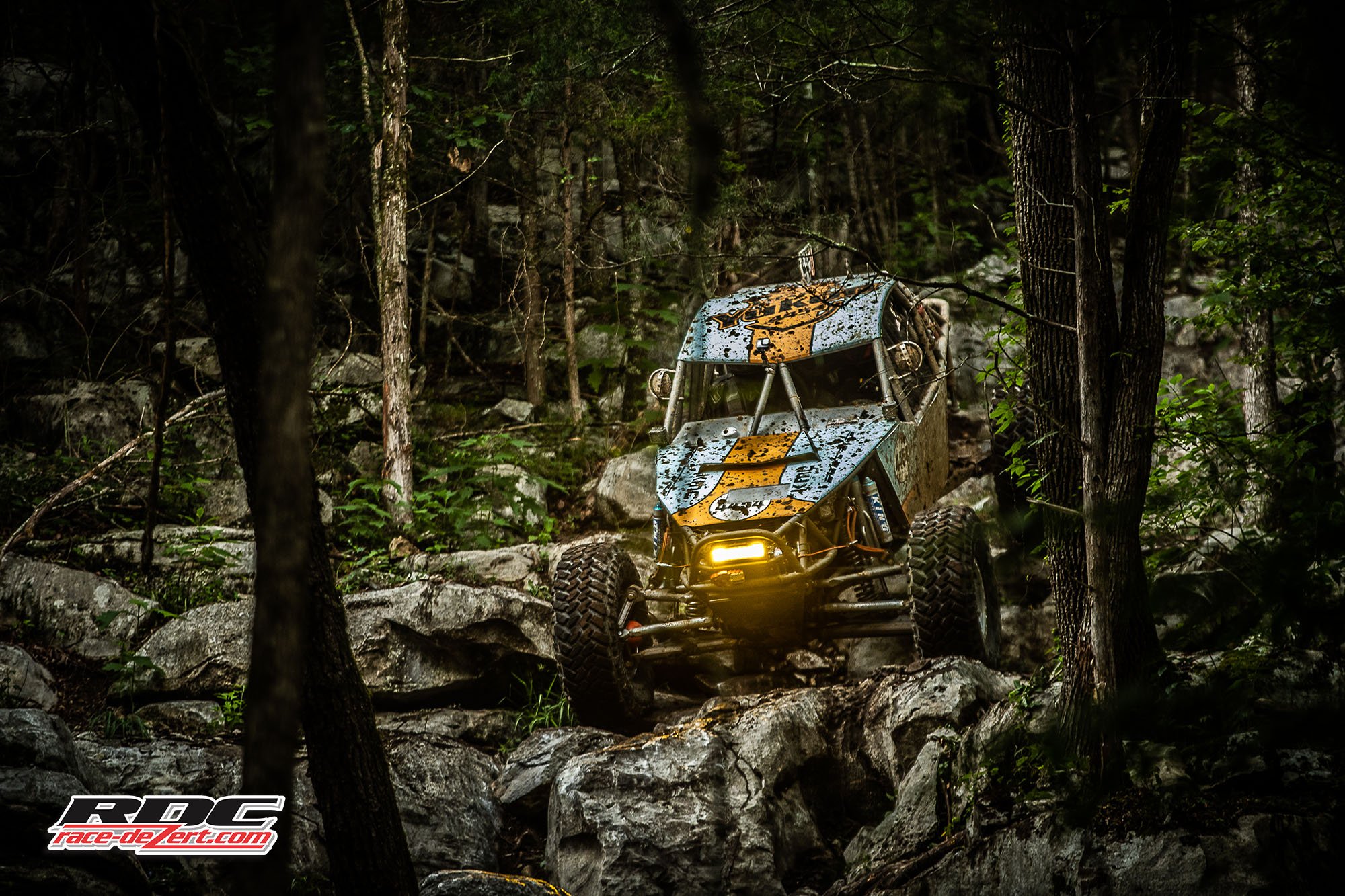 The course at Adventure Off Road Park offers a variety of terrain with hills, trees, rocks, water, mud and dust. Competitors would have to navigate through the tight trees and crawl over some slick muddy rocks before coming out of the woods and onto a grassy short course that would soon turn into dust. The week leading up to the race, called for a chance to of thunderstorms each day, which left the racers thinking that it was going to be another east coast mud race. To everyone’s surprise, it was fairly dry, and at one point they needed to bring in a water truck to keep some of the dust down. 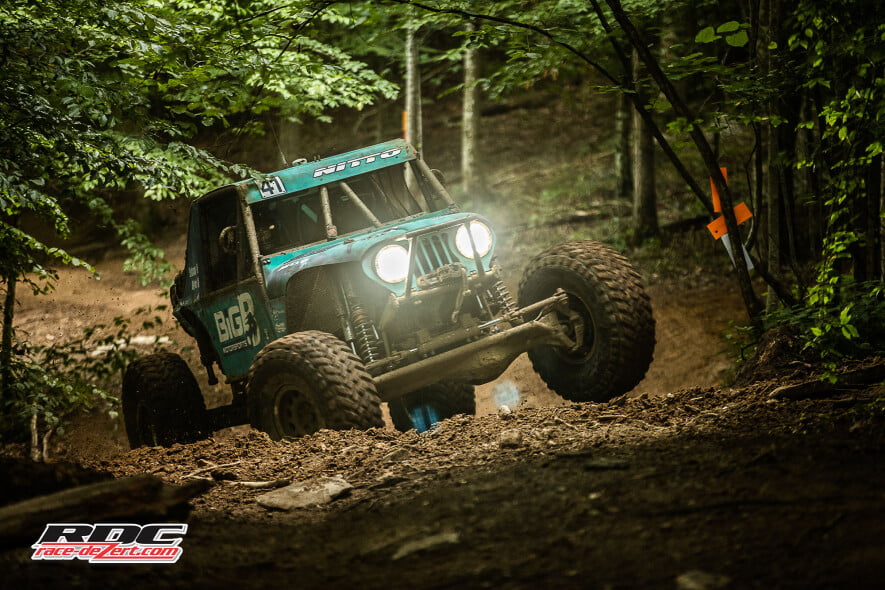 Friday would be a qualifying day for the racers. It would consist of a short little loop through the woods and a few rocks to set the line up for Saturdays racing. Jamie McCoy would be the first person to break the less than one minute mark in his Can Am UTV. It wouldn’t take long before he was joined by just a handful of other drivers, all which happened to be in the 4400 class. Josh Blyler would set the fastest lap with a fifty seven second run to put him in the pole position for his race.

Saturday morning would kick off with a 170 UTV race on the short course.   Then at 10AM, the UTV Class would take the green flag and head out into the woods. The course would prove to be tough on the UTVs, with only four of the original fourteen cars that started finished on the lead lap. Jamie McCoy would keep a steady pace throughout the race to finish in the top spot. 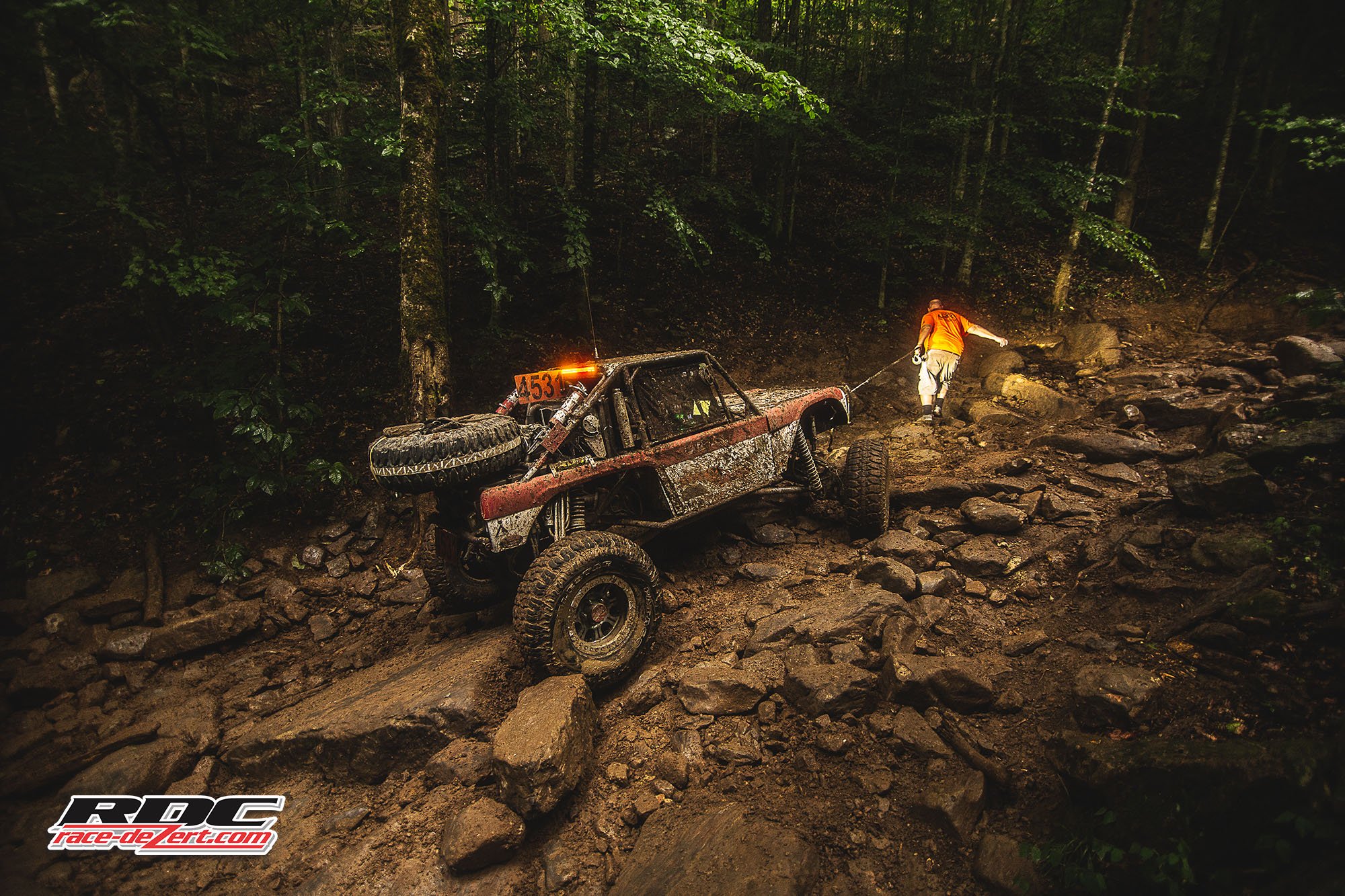 The second main race of the day would be the EMC Cars, which consists of three different classes. Stock, Modified and Legends cars would all be on the same course at the same time, competing amongst their own classes. Half way through the race, the skies opened up and the rain came down. While it only lasted about twenty minutes, it definitely changed up the race. The rain turned the track into slick mud, which would turn the hills and rocks into a completely different course.

Jeremy Jones and Cade Rodd would swap positions back and forth and coming across the finish line, neither new who won because it would be so close on corrected time. Jeremy Jones would edge him out by a small margin to take the victory. 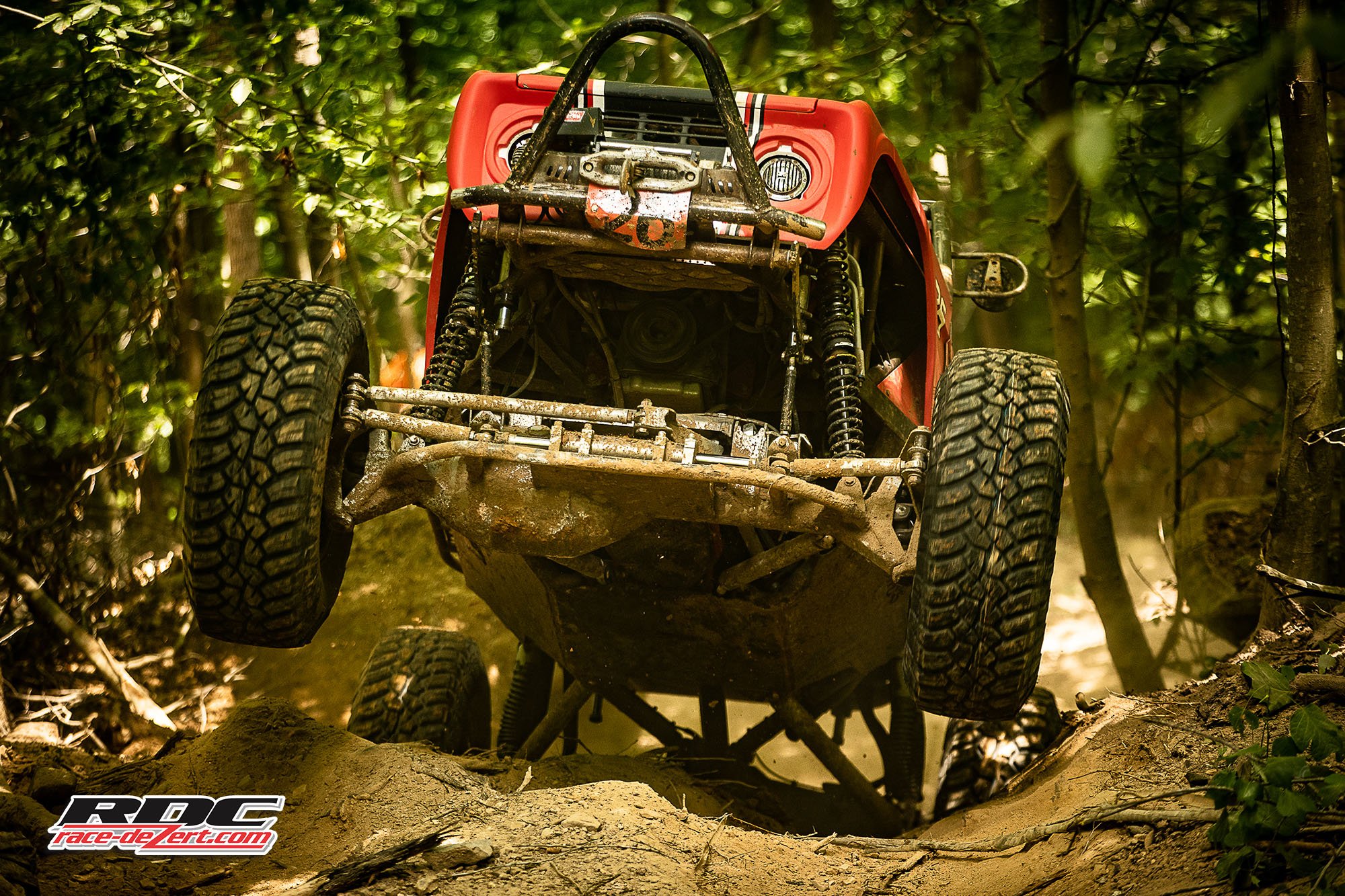 The 4400 unlimited class would be the final race of the weekend. With thirty cars taking the green flag for this race, everyone new it would be a great race. This race would consist of eight laps. On one of these laps, the racer would have to take a joker line that would take them down a rocky technical trail. Each competitor could choose which lap they wanted to take it on, and it would save them some time on the course. There would be some strategy involved in this because you could make up some much needed time by using this line.

The solid axle cars of Josh Blyler and Erik Miller, who qualified one and two, would keep a great pace through the trees staying out front the whole race. Other competitors started falling off the pace with mechanical issues, while some had to call it quits all together. 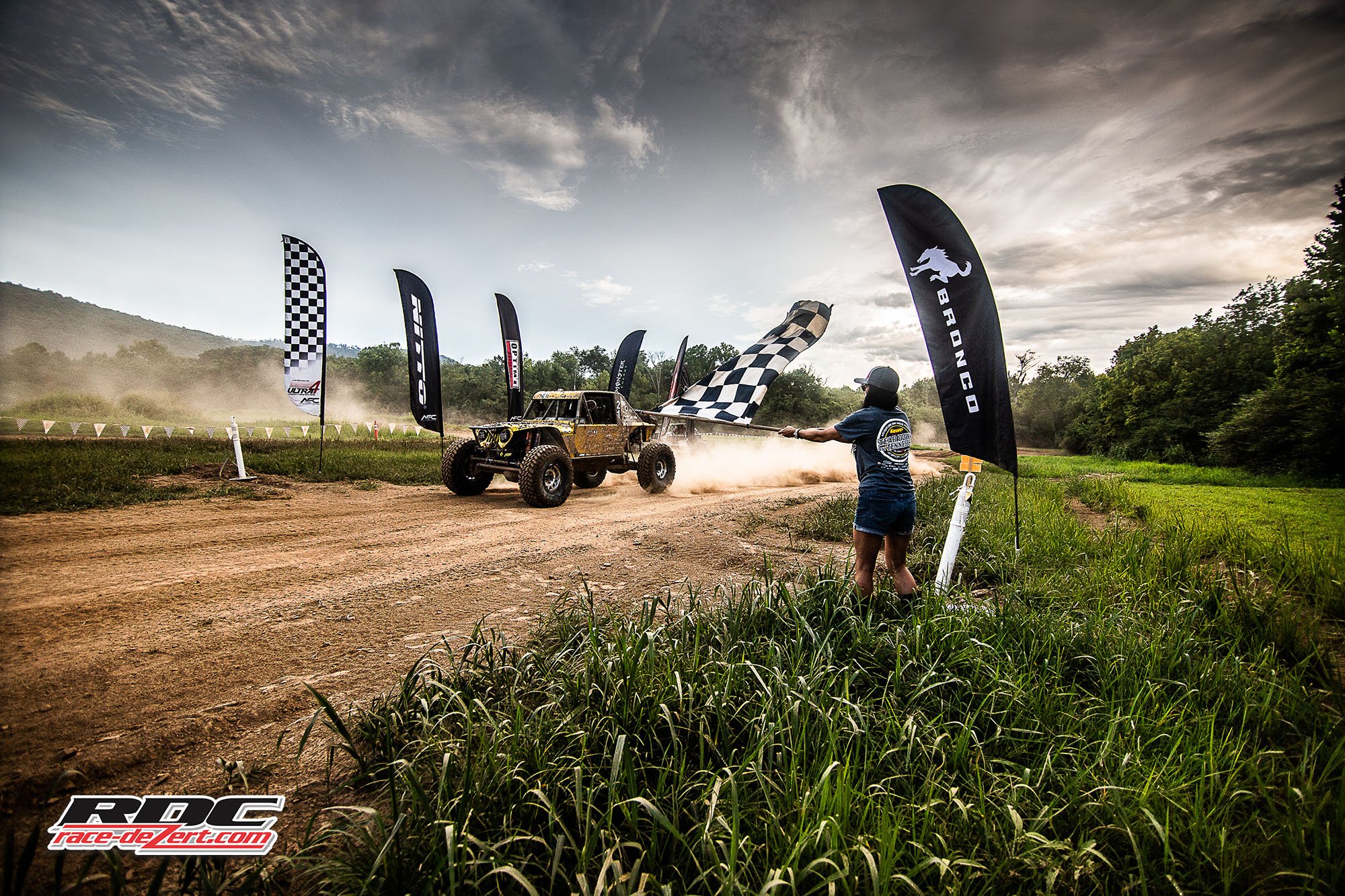 Erik Miller would make his way around Josh Blyler and be the first one to cross the checkered flag and take him the number one spot. Josh Blyler would take second, followed by Bailey Campbell and Shannon Campbell.

Thanks for the coverage Curtis.

It was great to be back on the dirt!

Dave Cole 4454 said:
Thanks for the coverage Curtis.

It was great to be back on the dirt!
Click to expand...

It looks like it was a fun race. Ryan told me he was shooting it so I asked him to cover it for us. It might look like I wrote it since it shows me as posting here in the forum but on the homepage it shows Ryan as the author. I need to get him setup with a username in here so it links the two correctly on his coverage in the future.
dezertpeople.com
offroadaction.ca

Bummer on Bailey Campbell’s qualifying mishap. Strong run. She is going to win soon. Was leading at KOH this year midway I believe. Just a matter of time. Cheers.