2021 DAKAR: ARABIA
AS NEVER SEEN BEFORE

Chapter 3 of the history of the Dakar is now in full swing. After the first edition held in the Middle East last January, the competitors and crews are heading back to Saudi Arabia to continue exploring the deserts of the country. The route designed for the 2021 edition is a loop course beginning and ending in Jeddah, where the toughest competitors will arrive a few days after the rest day in Ha’il, where the Saudi rally-raid community comes together every year. While the bivouac will revisit some of the places where it set up camp a few months ago, the specials will be 100% new.

As the race enters uncharted territory, the measures taken in 2020 to put the focus on navigation will continue their natural progression. Road books will now be handed out in the morning right before the start of each special. Some categories will have digital road books. Furthermore, the rules have been amended to slow down the vehicles and, in general, to make the race even safer. Aural warnings in the approach to certain difficulties, the definition of “slow zones”, the reduction in the number of tyres available to bikers and the mandatory use of airbag vests will help to curb risks.

The 2021 Dakar also takes a trip down memory lane with the launch of the Dakar Classic. In parallel with the main race, a test of consistency will be held for vehicles that took part in the Dakar or other major rally-raid events before the 2000s. The cars and trucks that forged the legend of the Dakar will be making a comeback… in time for chapter 3!

While Saudi Arabia made a strong impression on the hearts and minds of the competitors of the 2020 Dakar, it was only a sneak peek of its geography. Come 2021, its vast and diverse landscapes will set the stage for a new tour of the desert in which riders, drivers and crews enter uncharted territory. Although some of the towns and cities that hosted the bivouac last January will be returning, the action will be brand-new! 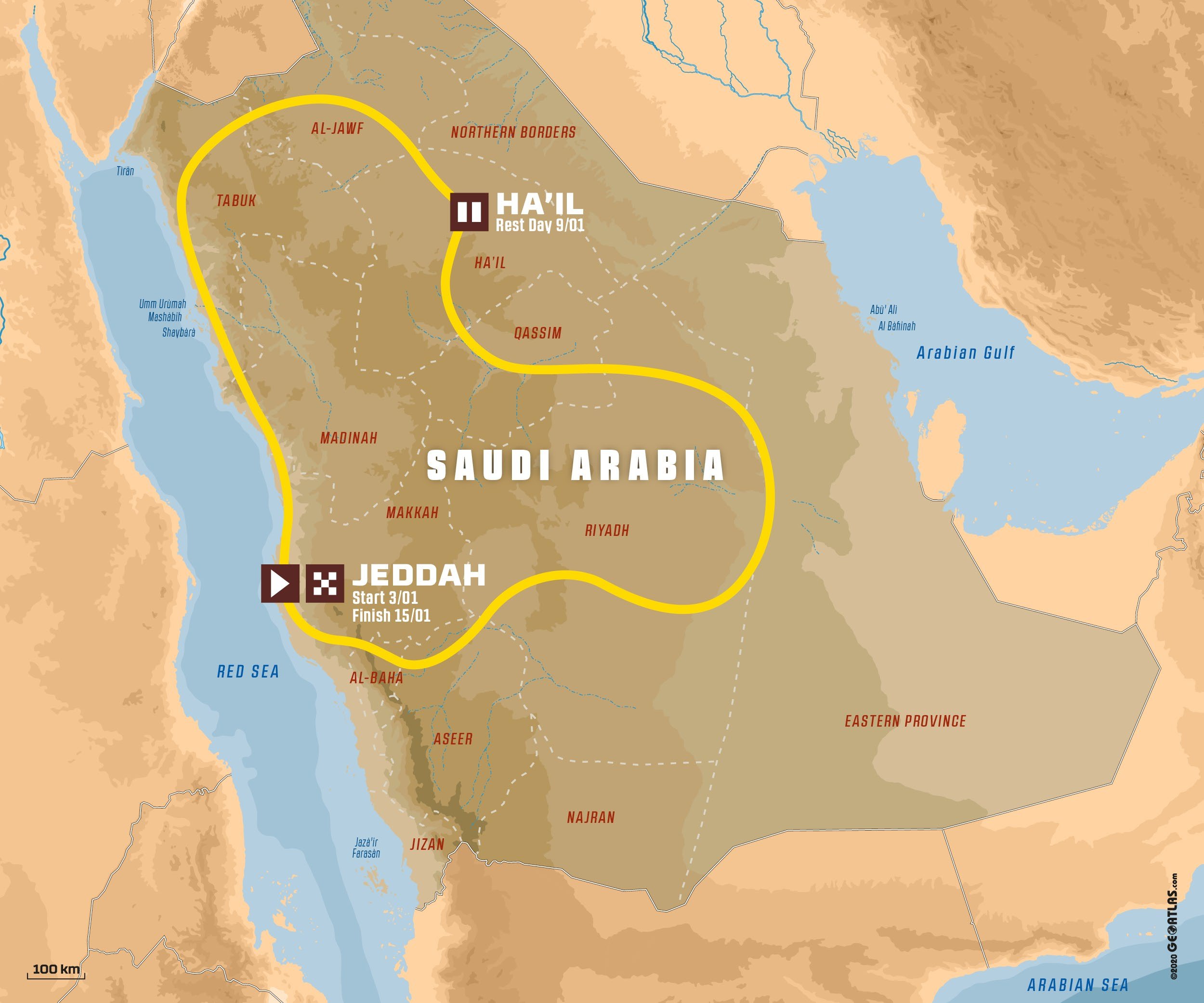 A prologue in Jeddah
On the shores of the Red sea, the vehicles will rev up their engines and open the first gaps on a spectacular course designed to keep fans on the edge of their seats. The opener will be decided by seconds.

Two loop stages
Some regions (and the quest for technical sections) are worth staying a bit longer to discover everything they have in store. It also gives support crews a well-deserved breather.

A marathon stage
The marathon stage fits the spirit of rally raids and the Dakar like a glove. Riders, drivers and co-drivers will have to marshal all their physical, mental, technical and strategic resources… while leaving something in the tank for later. A superb balancing act.

The sporting teams in charge of preparing the 2021 edition of the rally have focused on fleshing out the new navigation system introduced last January and slowing down the vehicles to make the race even safer.

Road book to be handed out just 10 minutes before the start
Mediocre competitors can memorise a road book from A to Z, but real navigators know how to read and interpret it on the fly. The cream of the crop shone in the stages of the 2020 edition in which road books were handed out right before the start. In 2021, this will become the general rule.

The road book will also experience a quantum leap in usability with the introduction of a digital version, which is more reliable than the paper one, in certain categories.

Aural warnings and slow zones
The road book already highlights danger zones, but from now on competitors will also receive aural warnings in the approach to difficulty 2 and 3 zones to keep them alert. Furthermore, certain especially tricky and hazardous sectors will be categorised as “slow zones” where the speed limit is 90 km/h.

Spare (the) tyres
In rally raids, tyre management usually plays a decisive role and determines just how hard the competitors can push their vehicles. No tyre changes will be allowed in the car category during the marathon stage —not even between competitors. Each motorbike will be granted a total of six rear tyres for the entire rally.

Airbag vests now mandatory
Airbag vests, which are already in use in several road categories and in MotoGP, can reduce the severity of injury in a serious crash. They will now be mandatory and subject to inspection by race officials during technical scrutineering.

Penalties for piston changes and ban on work at refuelling stations for motorbikes
Penalties for engine changes were introduced a few years ago to encourage bikers to ride carefully. From next year, time penalties will be applied starting from the second piston change even if the rest of the engine remains the same. Finally, bikers will no longer be allowed to work on their motorbikes at refuelling stations.

The legend within the race
The 1980s and 1990s, the formative years of the Dakar, are often remembered for their vehicles. Although no longer in contention for the win, those that have been properly maintained or restored are still more than capable of hitting the roads and tracks, and now they will go head to head in a test of consistency organized at the same time as the Dakar and with the same starting and finishing points. Copies of vehicles that were designed before 2000 and entered the Dakar will be admitted alongside vintage cars and trucks.

At a crossroads
The future often draws inspiration from the past. In constant evolution since its inception on the eve of the 1980s, the Dakar honours its past as it strides confidently into the future. The Dakar Classic contributes to the twofold objective of giving vintage car buffs the opportunity to relive the adventures of the trailblazers while supporting the initiatives that aim to put renewable power at the heart of the rally.