So, Which of the Racers Are Ready to Fight for Their Dreams?

“All men dream: but not equally. Those who dream by night in the dusty recesses of their minds wake up in the day to find it was vanity, but the dreamers of the day are dangerous men, for they may act their dreams with open eyes, to make it possible.” T.E. Lawrence 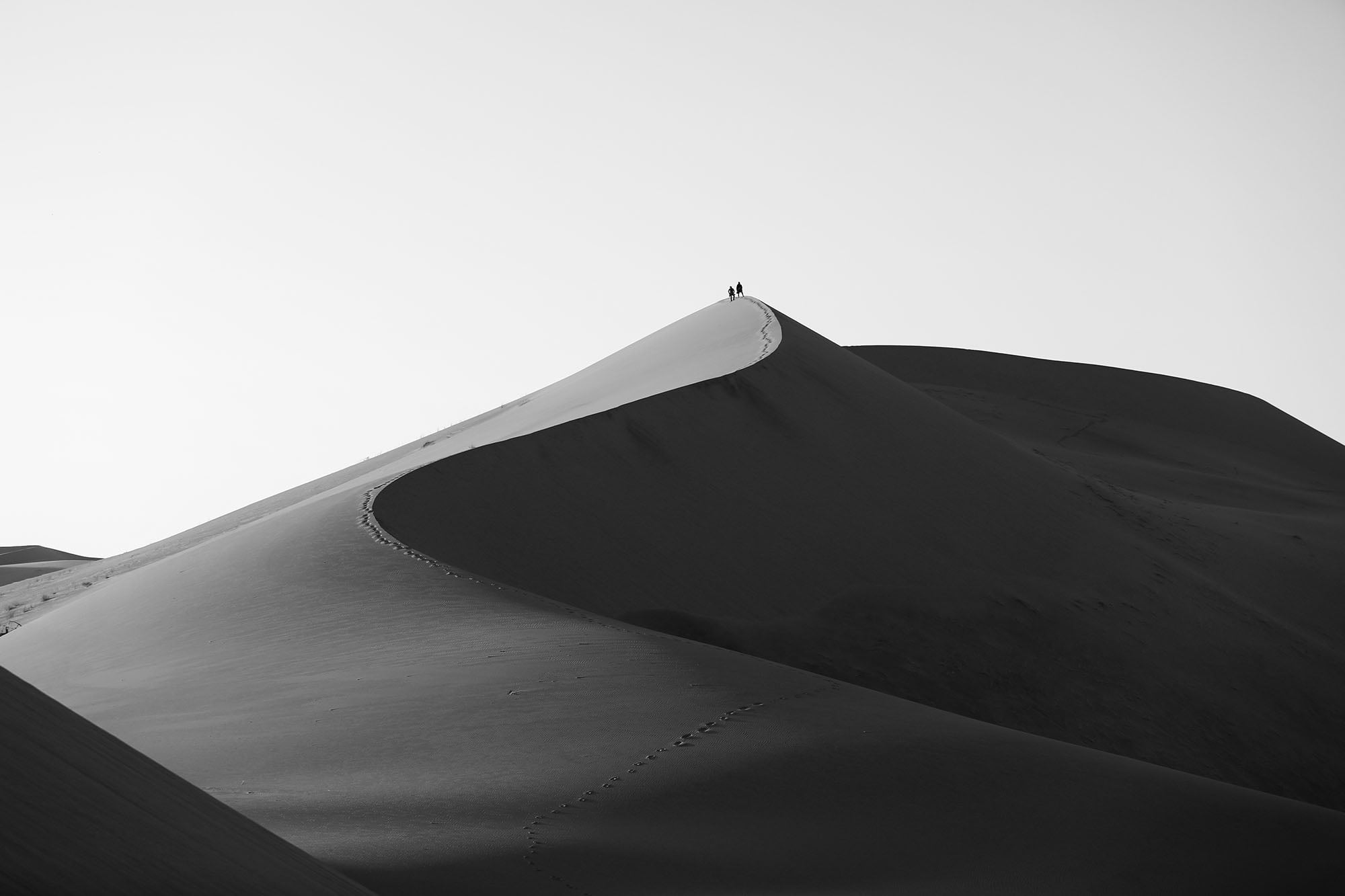 Every person in the bivouac, risking health and safety amidst a pandemic to attend, has dreams about Dakar. Dreams they wholly intend to reach by the close of the rally. Those same dreams may be the catalyst which brought them to Saudi Arabia in the first place. While others developed their fantasies the moment they stepped into the bivouac. Entering a surreal nomadic kingdom ruled by a broad authority distinguished best by their bright yellow puffy jackets and funny accents. Giants roam among us in these lands, shared with a variety of more modest sized, agile mechanical creatures constructed of industrial matter, like Aluminum skeletons and plastic shells to protect their precious innards. Angry beasts with eyes that glow in the dark to chase down their victims nimbly over any terrain they encounter at blistering speeds. Men are their masters, as well as their slaves. Because men and women would do anything to keep them, control and be in awe of them. To chase prestige with the machines, allowing oneself to suffer for time in the pursuit of success. That’s the Dakar Rally. 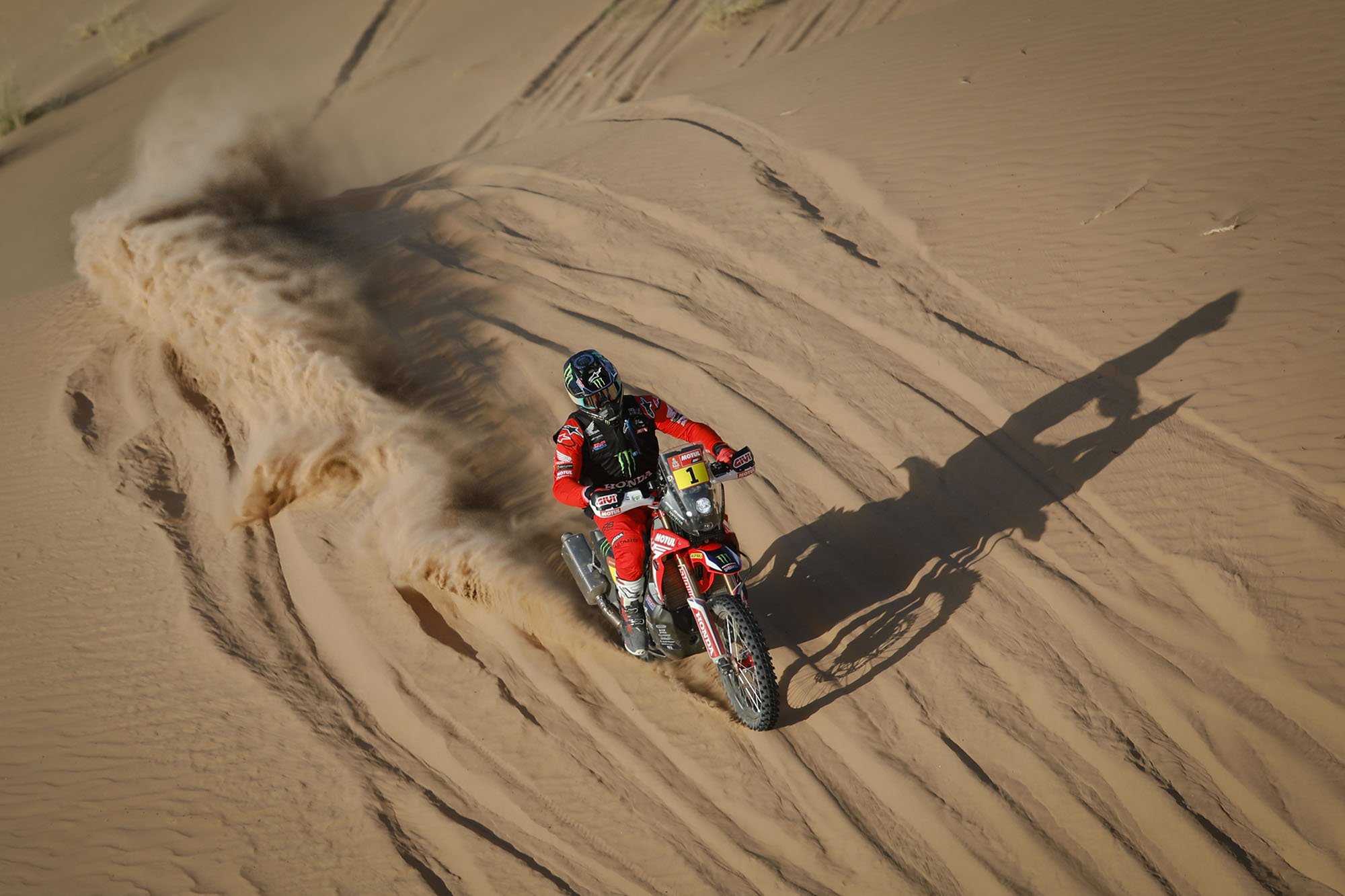 Look at today. Special Stage Two took pilots away from the rocks in Bisha – which caused innumerable punctures and perils – onto a swift, smooth, sandy plateau early on until the first assortment dunes. The set of waves came at them softly but didn’t last long before increasing in mass. It was around here when, as one might expect, problems started to arise. Matthias Walkner (#52 Red Bull KTM) was held up about 40 kilometers in troubleshooting clutch issues. Ultimately, he made it to the bivouac in Wadi Ad-Dawasir on his own but lost at least two hours in the process. But he wasn’t alone in the struggle. A huge blow to Factory Yamaha and the Americans who support him, Andrew Short (#7 Monster Energy Yamaha) with so much promise for an impressive finish at the event was let down by his motorbike. He did his best to find a solution to no avail and eventually had to throw in the towel. Slight or severe, a change in terrain will alter a racer’s fate, no matter how sure the outcome seems. Even SS1’s leaders Toby Price (#3 Red Bull KTM), Kevin Benavides (#47 Monster Energy Honda), Sam Sunderland (#5 Red bull KTM) and, of course, Walkner all fell from grace, abruptly exiting the Top Ten. A clip of Price striving to ride out of a tight grouping of short, steep sand hills has already burned holes in thousands of little black mirrors. 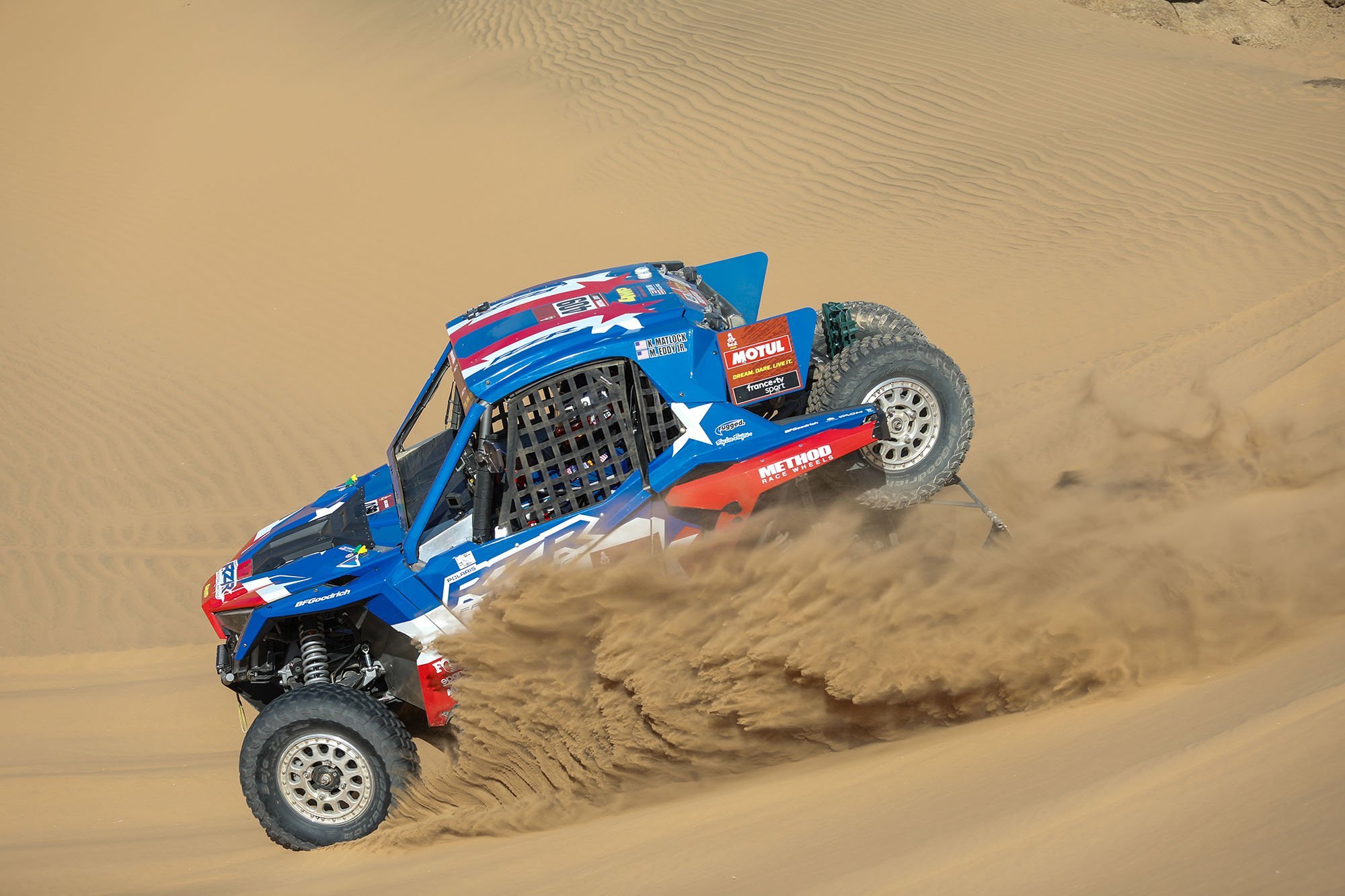 The dunes are unpredictable, elegant, alluring. And like Lawrence of Arabia, over the 10 remaining stages competitors will each cross a vast desert to fight in epic battles and, know it or not, change history. The Polaris RZR Factory Racing has already made quite an impact as the only American OEM supported team to compete in Saudi. And despite looking strong, captains Kristen and Wayne Matlock placing well at 10th and 12th after Stage One – each in their own RZR, destiny decided to foil their plan. Moving quickly through the initial sections, Kristen and navigator Max Eddy Jr. (#409), endured some damage to their vessel after misreading their terrain on a landing. This learning experience left them stranded for several hours before their crew came to help put the car back on-course. We still don’t know if their BFG’s will roll up to the starting line tomorrow, but there’s still hope! Wayne Matlock and Sam Hayes (#420), however, fared – each in their own RZR – much better than their teammates, finishing in 22nd and rising to 11th in the SSV class. 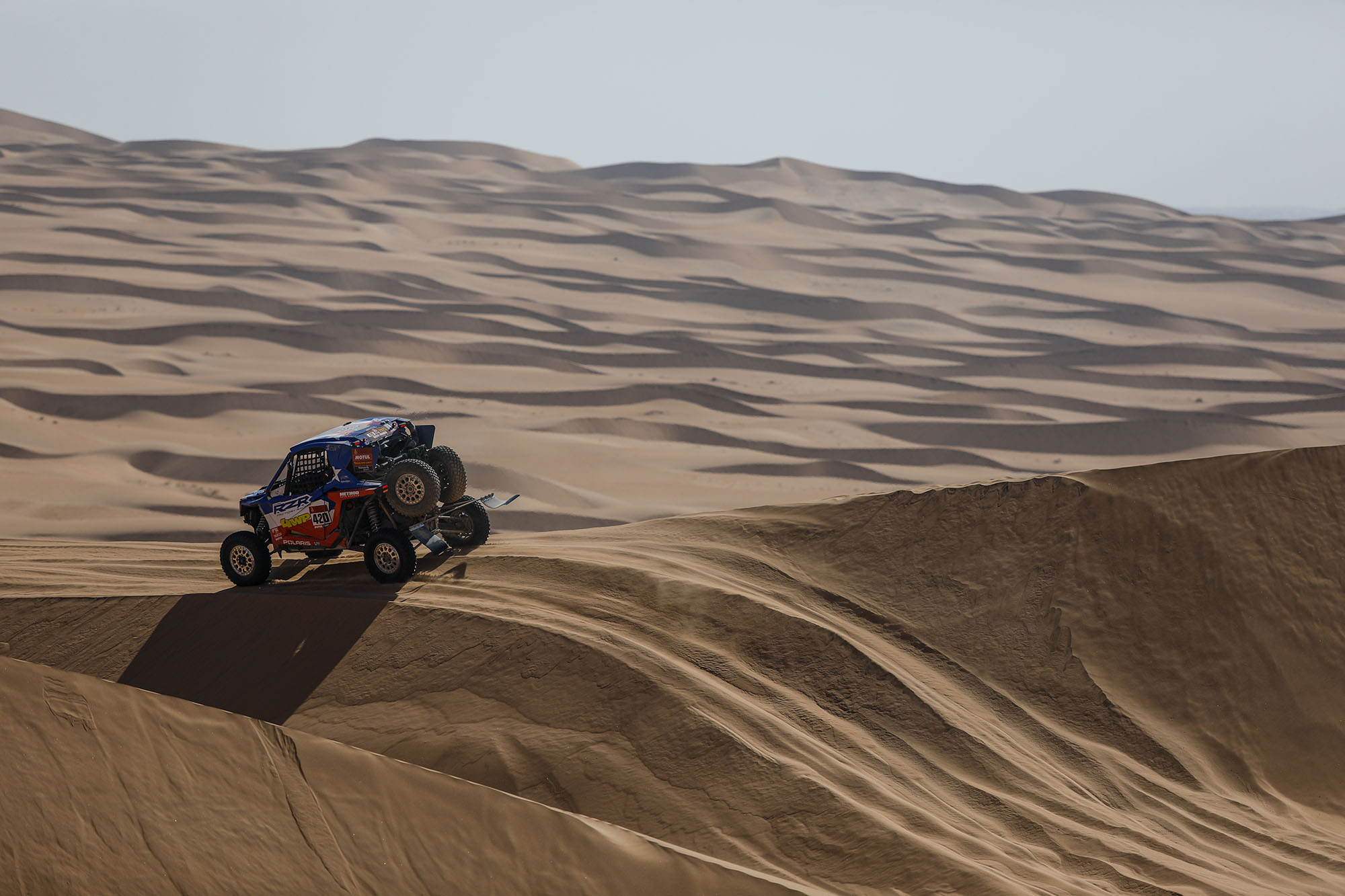 “There were a lot of really soft sand dunes. It was a long day, but the dust wasn’t near as bad [as the previous stage]. Other than that, just kind of dueled it out. We had one small mechanical problem that took us a couple minutes. We were passed by a few cars, then passed a few ourselves when we were back out there. And we got through it before dark, which was our goal.” – Sam Hayes, Co-Pilot, #420 Polaris RZR Factory Racing

What this special required most was endurance. A 228km liaison kicked off the grind. But the next 457 off-road kilometers began the real test. The most common statement from participants was how long the stage was; next that this roadbook was even more difficult than the last. Yet, there are some who excel when the pressure’s on them. Disappointed by his first performance, Ricky Brabec (#1 Monster Energy Honda) pushed himself to a more favorable second seed, but he has no delusions about this momentary triumph, “It’s going to be really tough, but there’s a lot of racing left to do. Ten days to go. We just need to stay focused and try to make it to the finish everyday with no more mistakes.” Brabec’s Honda mate Joan Barreda Bort (#88) is no stranger to hardship, nor to persistence. 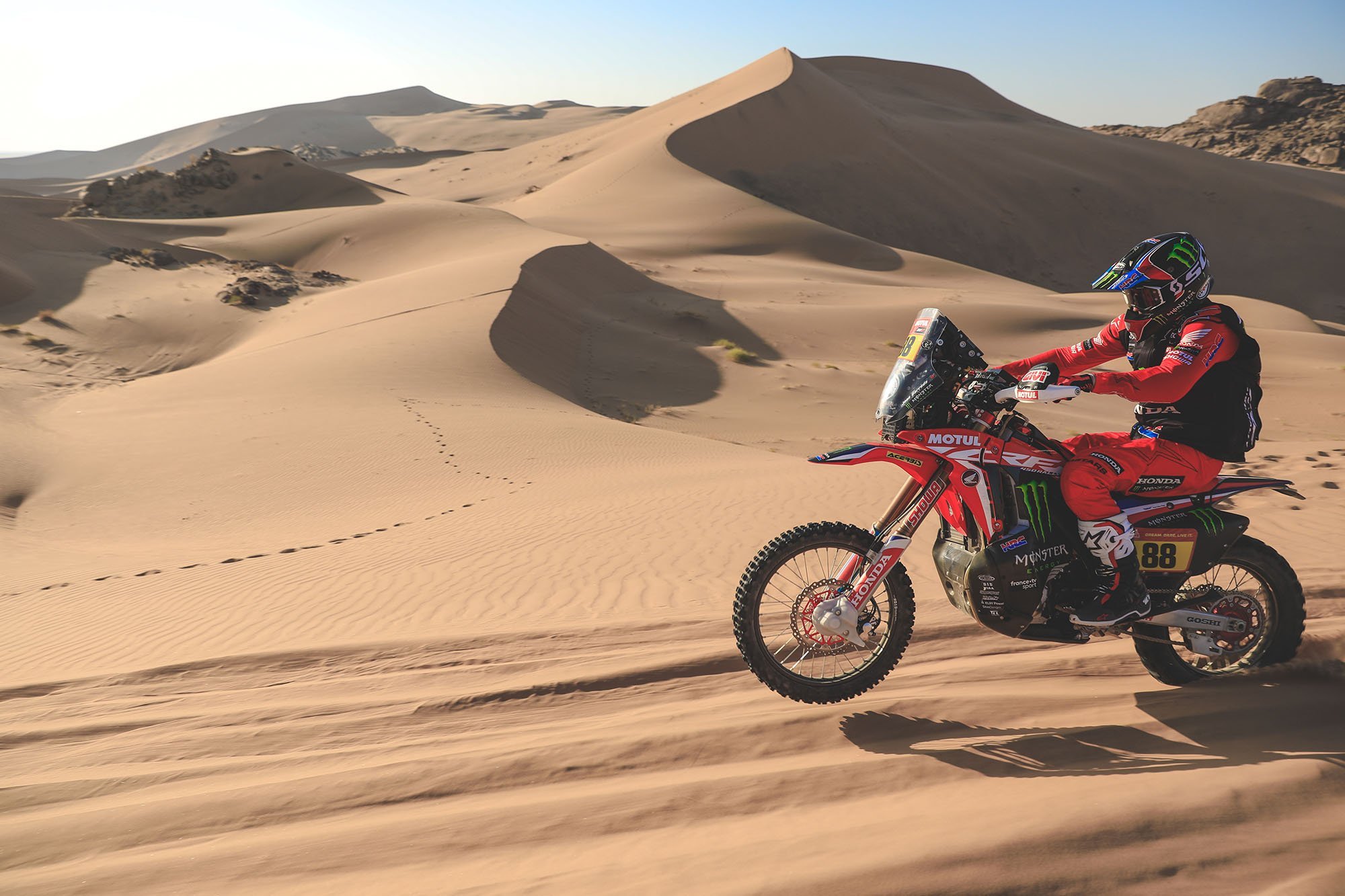 “After the hard day [at Special Stage One], I was forced to push with everything. I put it all in today. I enjoyed this type of stage a lot. It’s faster and better for me, better than enduro – like it was yesterday. Right now, everything is perfect. Sure, tomorrow will be a long day and really hard again, but the race is like this.” – Joan Barreda Bort #88, Monster Energy Honda 2021 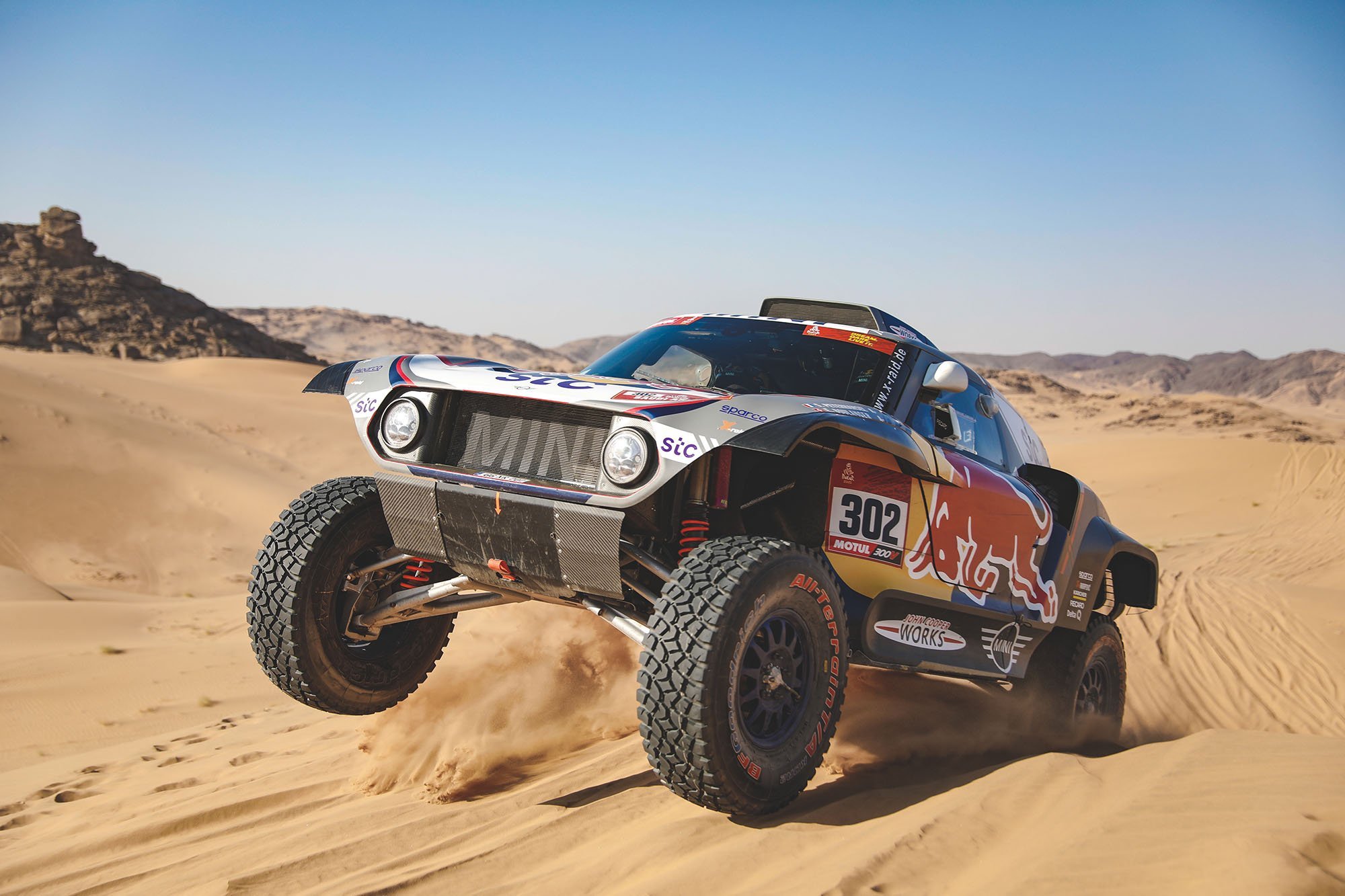 The quads also saw their fair share of ups and downs, acquiring a new king for a day, Argentine-American, Pablo Copetti (#163 MX Devesa By Berta). He’s favored to podium, if his rivals, and Saudi, can’t do something about it. While Cars, as well, had a surprise ending. Nasser Al-Attiyah and partner Mathieu Baumel (#301 Toyota Hillux) leapt from 10th to the top step. Had X-Raid Mini colleagues Stephane Peterhansel (#302) and Carlos Sainz (#300) not been at each other’s throats the entire time, they might not have left the gate to the Winner’s Circle wide open for Al-Attiyah to wander through. Camas too can’t choose a champion and stick with it, but unlike the volleying of first place in Cars, the Trucks have been playing musical chairs. Teams coming out of the woodwork to stand up to the commanding KAMAZ – MASTER team, just to hand them the number one seat each new rotation. The #521 Polaris-branded MAN truck has been fairly consistent, holding onto positions in the upper teens. But it was held back from helping the #409 SSV try to fix mechanical affairs. Perhaps SS3 will bring luck to the enthusiastic trio riding in the cockpit of that distinguished red, white and blue garbage truck. Or will the only way to reach their dreams be with some shut-eye?

Visit the Rally Raid section of the RDC for to follow the 2021 Dakar Rally.

Ø Here come the first dunes, which will appear in a section stretching for about 30 kilometers in the first third of the stage. Yellow dominates the kaleidoscope here, but the white dunes will provide a touch of contrast. A lengthy off-track section — the desert’s answer to “open space”— comes right before the final sequence of sandy tracks.

Ø The participants in the Dakar Classic have also experienced their fair share of incidents, but the Beetle driven by Belgians Benoît Callewaert and Ghislain Morel safely reached the bivouac in Wadi, in 17th place on the day’s special.

Ø The figures are irrefutable: Joan Barreda has won as many special stages as Marc Coma in his career on the Dakar. Since his first stage victory in 2012, “Bang-Bang” has let his speed do the talking on all types of special and today has even overtaken Hubert Auriol in terms of his stage victory collection. However, the Honda rider has always found consistency problematic and has never finished higher than 5th place in the final general standings. His profile is similar to his countryman Jordi Arcarons, who triumphed on 27 stages without ever having won the overall title, but Barreda has not had his last word yet!

Ø Romain Dumas and his co-driver Gilles de Turckheim experienced a fiasco today, somehow brutalizing their car in the dunes. Luckily, both men are unscathed, but their vessel – as seen on Dakar’s Instagram stories – looked like it was in pieces.

10th Place Bikes, Xavier de Soultrait #12, HT RALLY RAID HUSQVARNA RACING: “It was a very good stage. I started in sixth and passed two riders. There were some hesitations at times because the navigation is very hard this year, but we found every point and I finished with Sam, Toby and Kevin. We rode for 100 kilometers together and it was very nice because we pushed the pace a lot and the landscape was very, very nice” “

1st Place Cars, Nasser Al-Attiyah #301, TOYOTA HILUX: “It was a good day, but I don’t know how much we have won back from Carlos or from Stéphane, you know. It looks like we’ve won the stage, but I don’t know by how much. Yesterday we lost a lot of time because we opened the way, and it was not really good for us…and we didn’t take risks. But today we went flat out, and everything is working very, very well. The tires were amazing and the car too, the pace from start to finish, no mistakes at all, Matthew did a good job. I’m quite happy and we’ll see. There’s still a long way, but it’s a good start.”

Lightweight Vehicle, Cristina Gutiérrez Herrero #387, RED BULL OFF-ROAD TEAM USA: “I tried to be patient, the stage was too long. Today was a very, very long stage with very hard dunes and a lot of fast stony tracks. I tried to get in front of all these guys. I don’t know the time but I think it’s good. I don’t feel the pressure. I felt good yesterday, but today was another day. The Dakar is so long, I just need to focus on the next day and continue like that”. 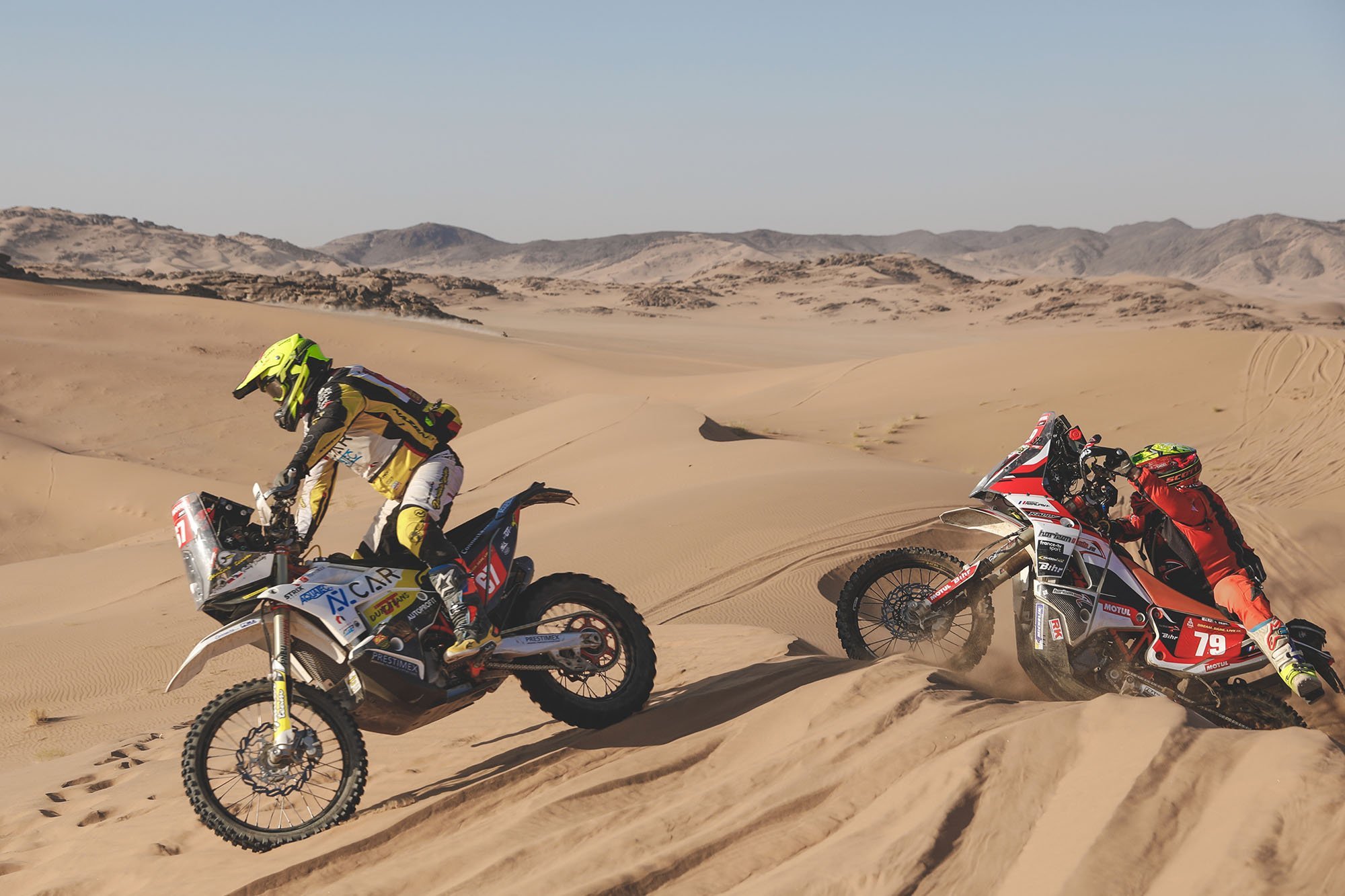 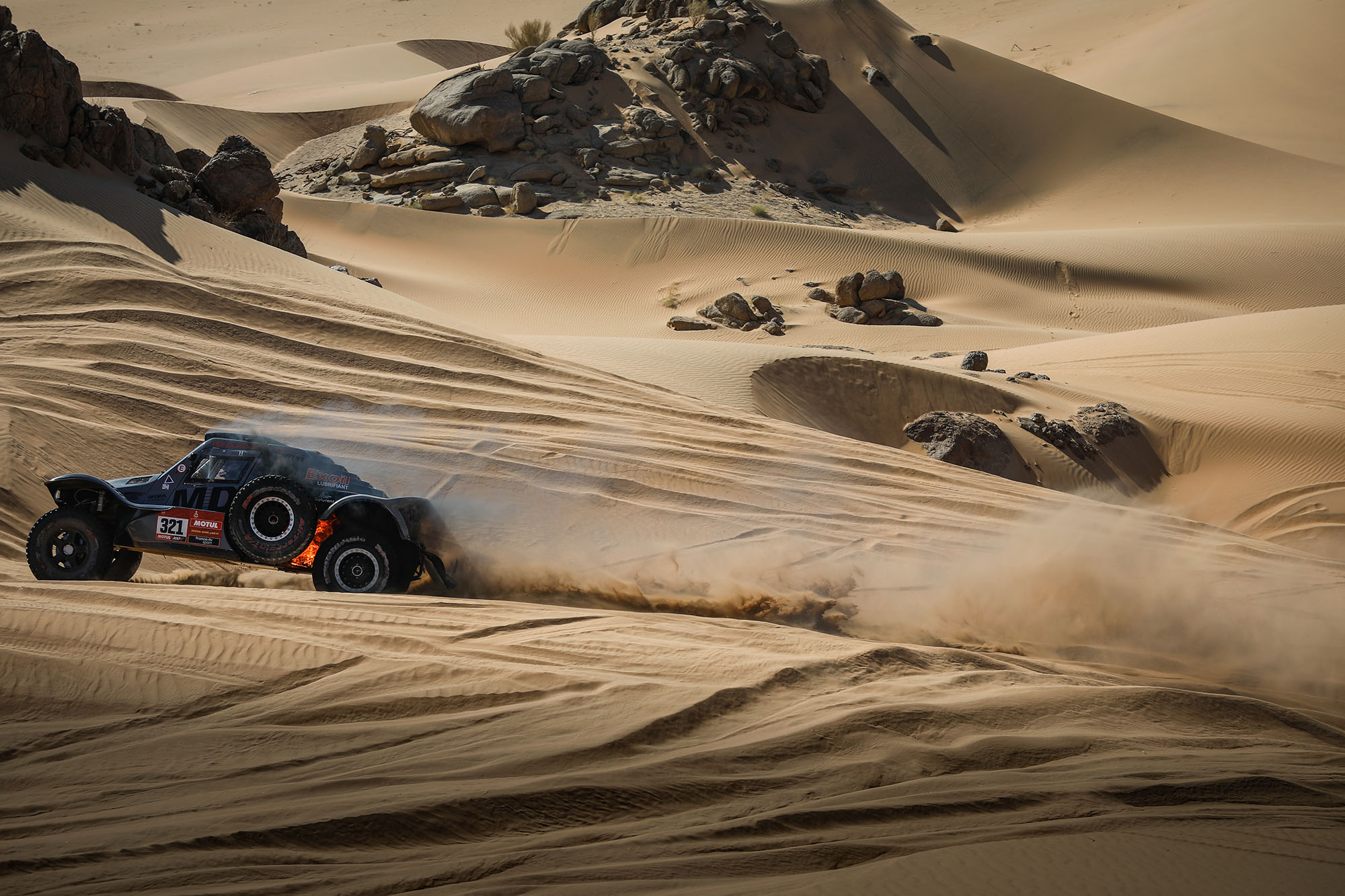 Gives a new meaning to the phrase 'he's on fire!'
Mark