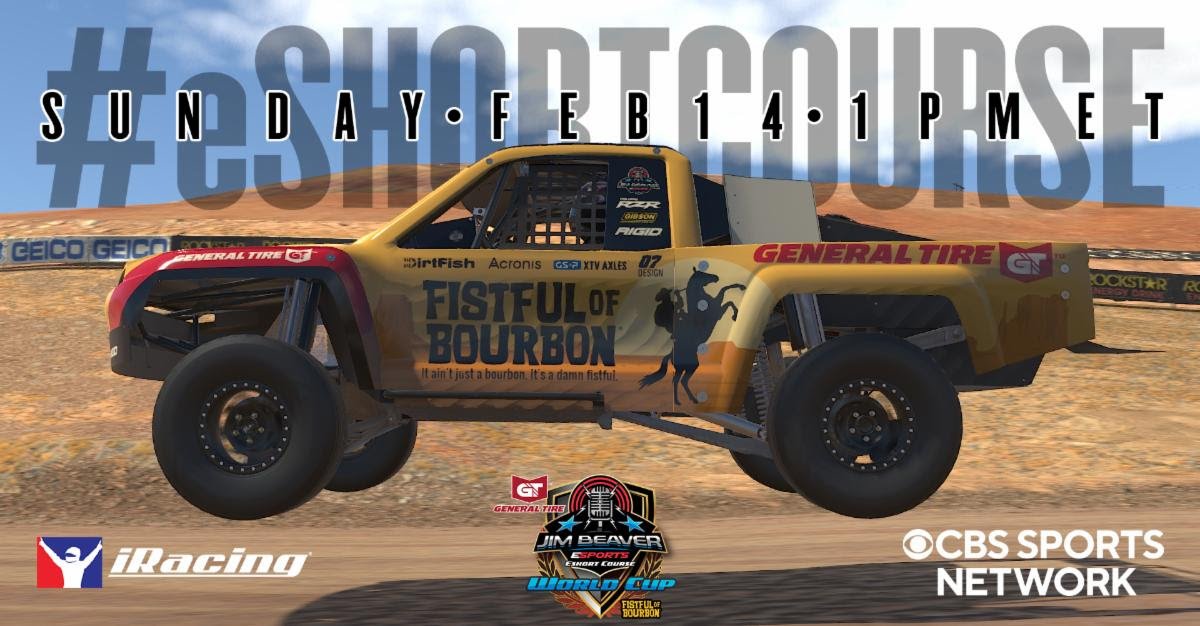 For the first time, the General Tire eShort Course World Cup presented by Fistful of Bourbon brings its high-flying mix of real-world and sim racing all-stars to television this weekend. The two-racing short course off-road event, run on the iRacing platform and organized by Jim Beaver eSports, will air on Sunday, February 14 at 1PM ET/10AM PT on the CBS Sports Network.

“We’re incredibly excited to bring the General Tire eShort Course World Cup presented by Fistful of Bourbon to national television for the first time this weekend,” said Jim Beaver, nationally syndicated radio host, off-road racer, and Jim Beaver eSports owner. “With the help of our partners at CBS Sports and iRacing, this year’s event was one of the most exciting races we’ve ever put on, and Sunday’s broadcast reflects that. We’ve got an impressive lineup of both real racing superstars and some of the fastest sim racers in the world, so I can’t wait to watch all the action!”

The unique event features two races, with Pro 2 trucks visiting Wild West Motorsports Park and Pro 4 trucks traveling to Crandon International Raceway. Each final grid was set by two heat races and a full-field inversion, leading to countless passing opportunities, full-contact moments, and chaotic finishes. The broadcast features the commentary crew of Evan Posocco, Beaver, and Tiffany Stone, and was produced by the same crew at iRacing that brought virtual NASCAR, IndyCar, and World of Outlaws races to television last spring in the midst of a pause in real-world racing due to the COVID-19 pandemic.