Stage One began before dawn. A scramble to find the true zero at timing and scoring, plus a surprisingly long liaison – lacking enough time according to some riders – raised the tension to moderately high. Nerves were cooking up in the proverbial kitchen, which par for the course. (Because if you’re not taking risks with your passions there would be no need for anxiety, right?) But add confusion and a countdown to this emotion-rich batter, and you’ll end up with a more salty than sweet taste in your mouth. To top off this slice of Funfetti box cake were light sprinkles of rain at DSS and approaching the bivouac in Vryburg, giving the two-part special a well-balanced presentation. The type of motorsports meal which leaves you fully satisfied upon consumption. Wet and cool at opening bite, and gradually melting away into a dusty heat as the sun rose towards the afternoon. The kilometers clicked away, and the hurdles continued to appear, if not in the form of the familiar tangible on-course obstacles, then as a psychological screening on how efficiently racers grasp the increasingly complex wayfinding… Or crack.

The wind howled throughout the second half of the special, free to pick up speed with no substantial masses in the Savannah to stand in its way. Buzzing sounds from 450s, and a rogue rally replica, bounced around the valley, riding the swift moving air in and out of the cracks and crevasses – fooling anyone who dared to measure their true distance. Standing from within the shallow canyon, perpendicular to the baren riverbed, the noise is cushioned by a family of giant trolls lining the tracks. Or that’s what it looked like. Only their massive bulbous feet – the base of the cliffs which have been whittled and rounded by centuries of weathering and flooding – can be distinguished when planted at ground-level. Whimsical as it might seem, this was what awaited the pilots on the other side of the arroyo. Narrow, winding, channels. The soft floor crumbling under hot rubber, even when vessels slowed to a tiptoe trying to maneuver the camouflaged ruts and dense rocky mounds. 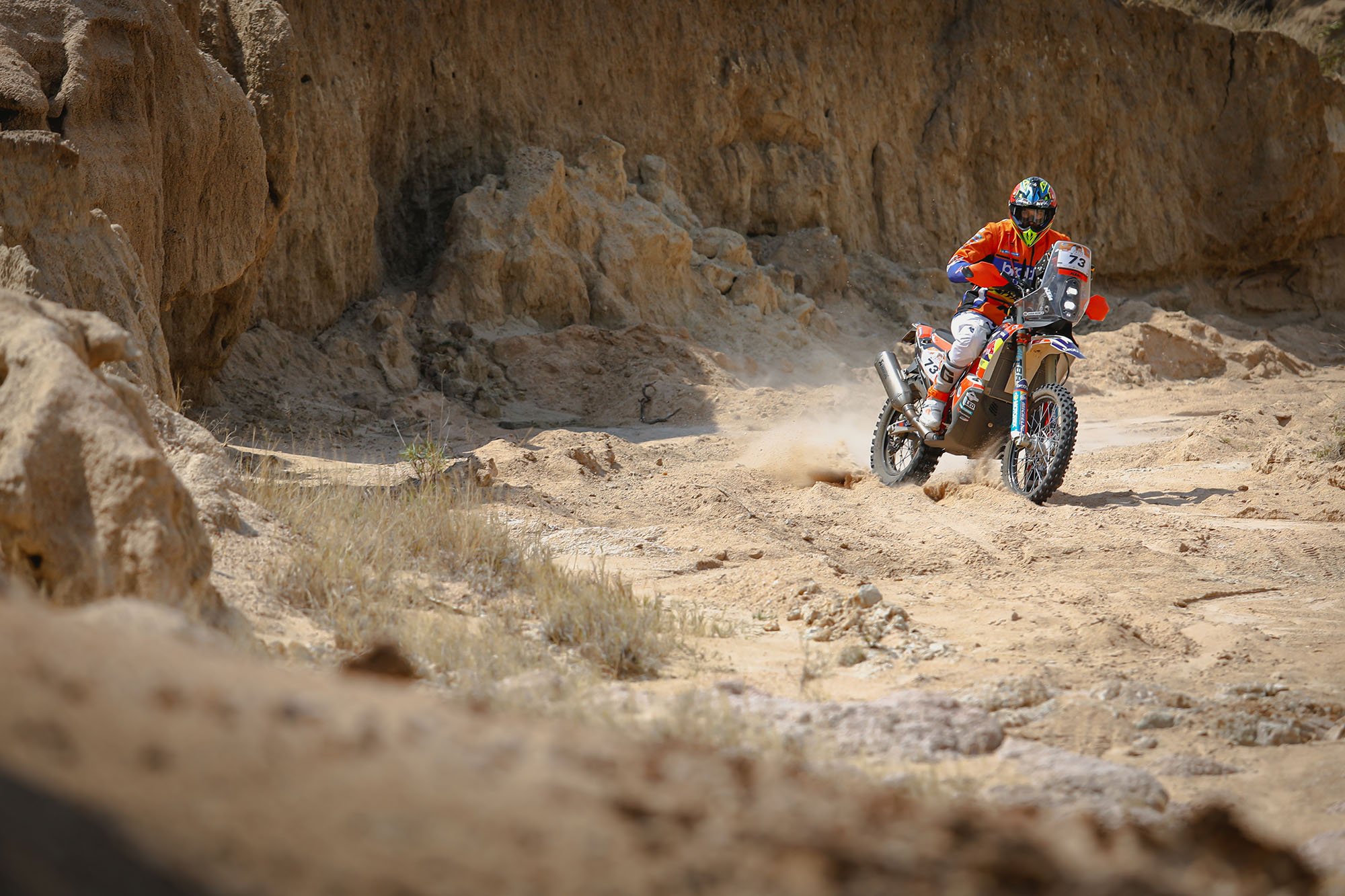 The top riders clumped together in a three-pack, arriving at the earliest river-crossing (if you can call a dried up wash a “river”) around an hour after the 11:15am launch. The initial two – #2, John Kelly and #73, Charan Moore – were neck and neck, yet the tone felt less aggressive than one might expect from adversaries fighting for the premiere spots on the scoreboard. It appeared more like a mutual agreement not to add stress to an already complicated roadbook. No need to increase exhaustion by trying to outpace each other. Ultimately, a battle at this level of the ranks could only wear on them further and possibly decrease a decent lead. On their tail was Gert Van Den Berg [#874], but it was a cool 15 minutes before the fourth man had made his entrance. And even he, Hentie Hannekom [#16], was a bit turned around. 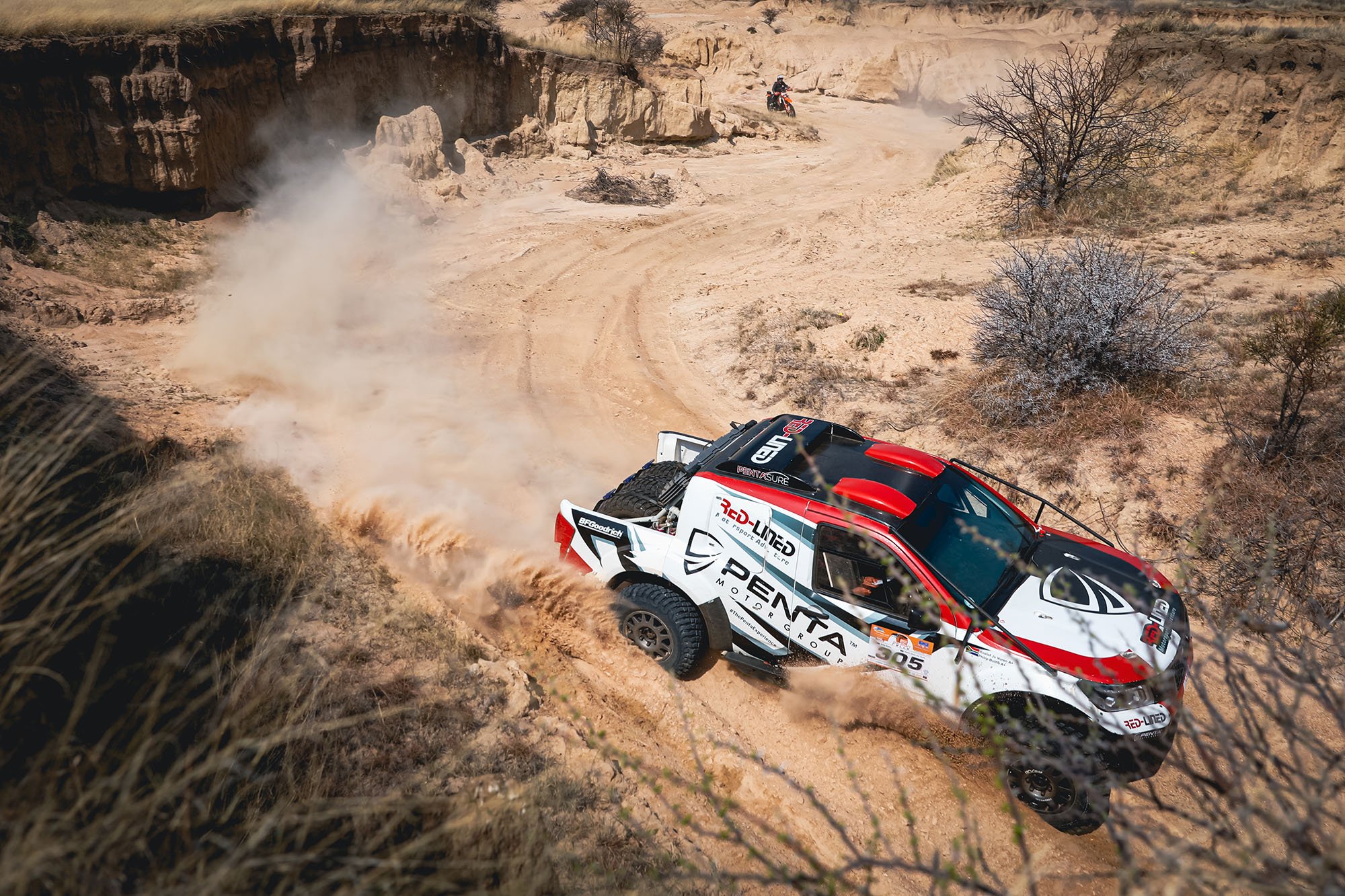 “This is our first [time] at the Kalahari Rally. And the second day is going very well, no mechanical issues. We’ve got a CV boot that was torn, but other than that, no issues mechanically…We’ll just keep on doing what we do.” – Philip Botha #305, Penta/Red-Lined Motorsports 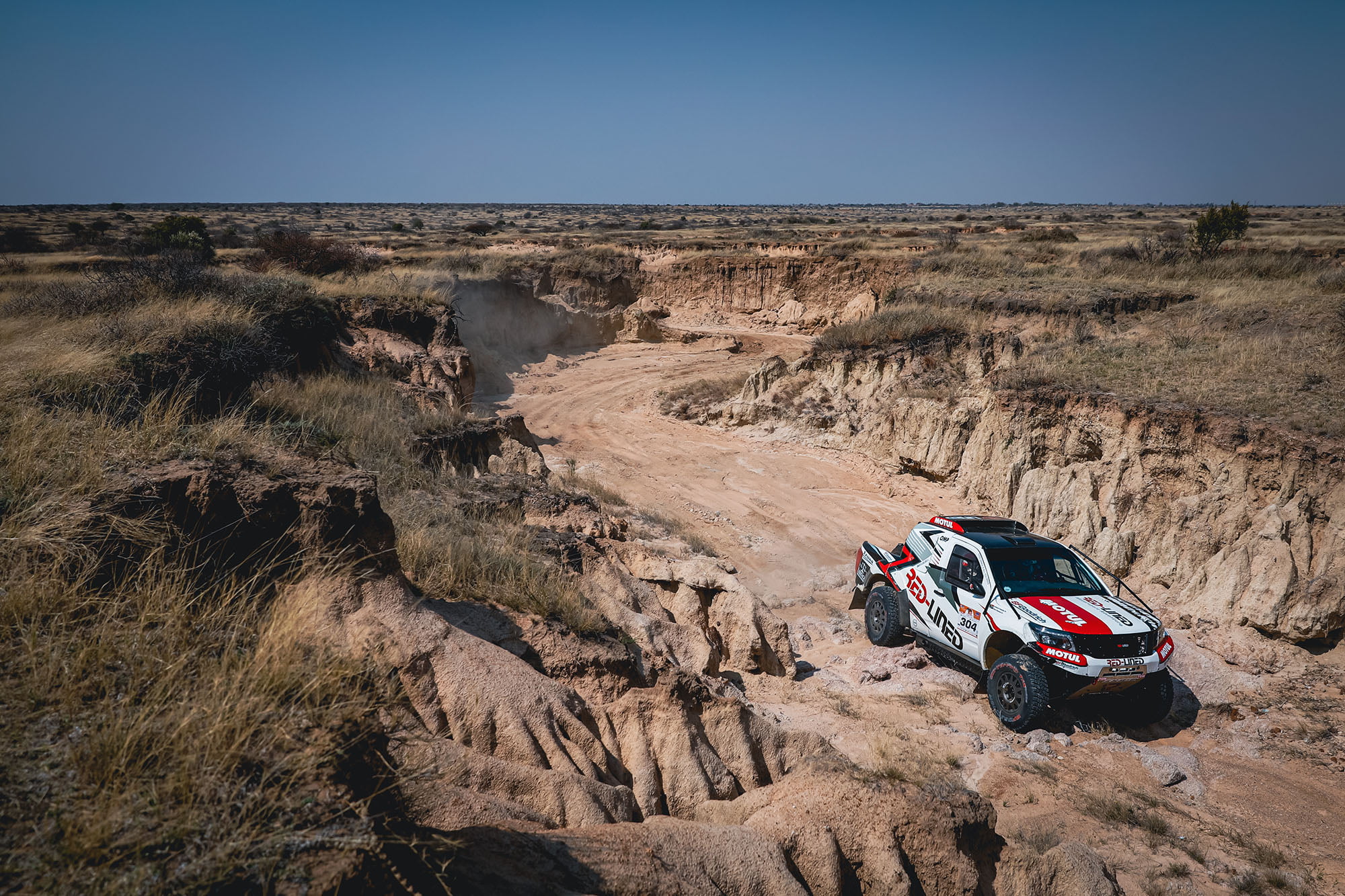 Bridging the gap between classes, over half an hour behind wasn’t just the next moto, or the one after that, but the initial car to make an appearance, #305 [Penta/Red-Lined Motorsports] with Philip Botha at the helm and Roelof Janse Van Vuuren on the paper. They kept up the pace, but ultimately took the third position. His colleagues Terence Marsh and Riaan Greyling took the stage in Red-Lined car #308, while teammates Eben Basson and Gerhard Schutte [#304] completed the Nissan board-wipe in Second. However, you wouldn’t be able to tell 30 K’s into the second special. It had been over an hour since the principle motorbikes twisted through the ravine. Several motorcycles trickled in before the view gave way to the second T1, rolling carefully into the grooves left by their rival predecessors.

What is most peculiar about this competition so far is that on flat, relatively hard-packed terrain – such as much of the North West countryside – the overall rate of travel is quite modest. Most other rallies might otherwise find these conditions the perfect breeding ground for blistering speeds. But that’s where the organizers have us turned around… And around and around again. Instead of offering velocity as a central challenge, and because the topography early on in this race is quite muted, the Route Team chose navigation as their poison. And it’s a bitter one. 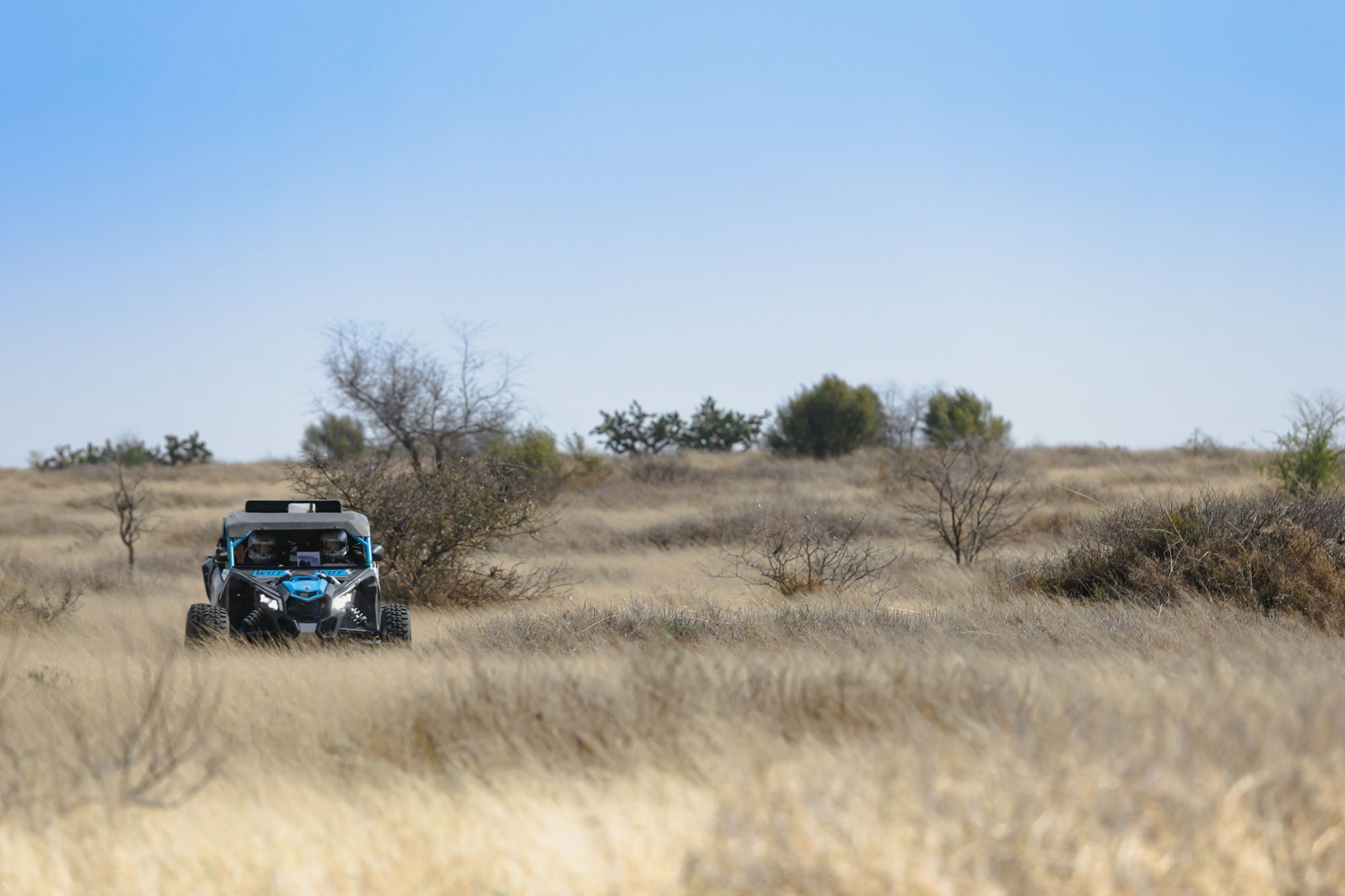 Lapsing a large span of time, a UTV – the WCT Engineering SXS, #204 – showed up to the party fashionably late with the pretty orange Century Buggy under its shoulder. The pair danced a bit in the grass as they searched for the invisible steps laid out in the tulips. Geoff Minnitt and co-pilot Siegfried Rousseau found their way first, dragging along #312 with Dewald Van Breda and Johann du Toit, who were surely keen to take the lead. But as the day went on, mayhem continued to unravel the strings keeping some competitors together. Several of them found the rigors of Stage One too much to handle, while others merely ran out of luck. In the Car class, #306 of the Junior Smith Trucking team took a big hit sending them to the back of the pack. While the lesser fortunate in their category, #303 driven by Schalk Burger and Henk Janse Van Vuuren, failed to complete the second half of the special after such a formattable performance in the morning.

“After winning [the first half of Stage One] today, we dropped a valve at 30 kilometers before the end of the stage. Before the end of [the second special]. Unfortunately, we were forced to abandon ship and had to call it a day. It is with great disappointment that we leave the Kalahari Rally, but this is motorsport…” – Schalk Burger #303, King Price Xtreme/S. Burger M/Sport 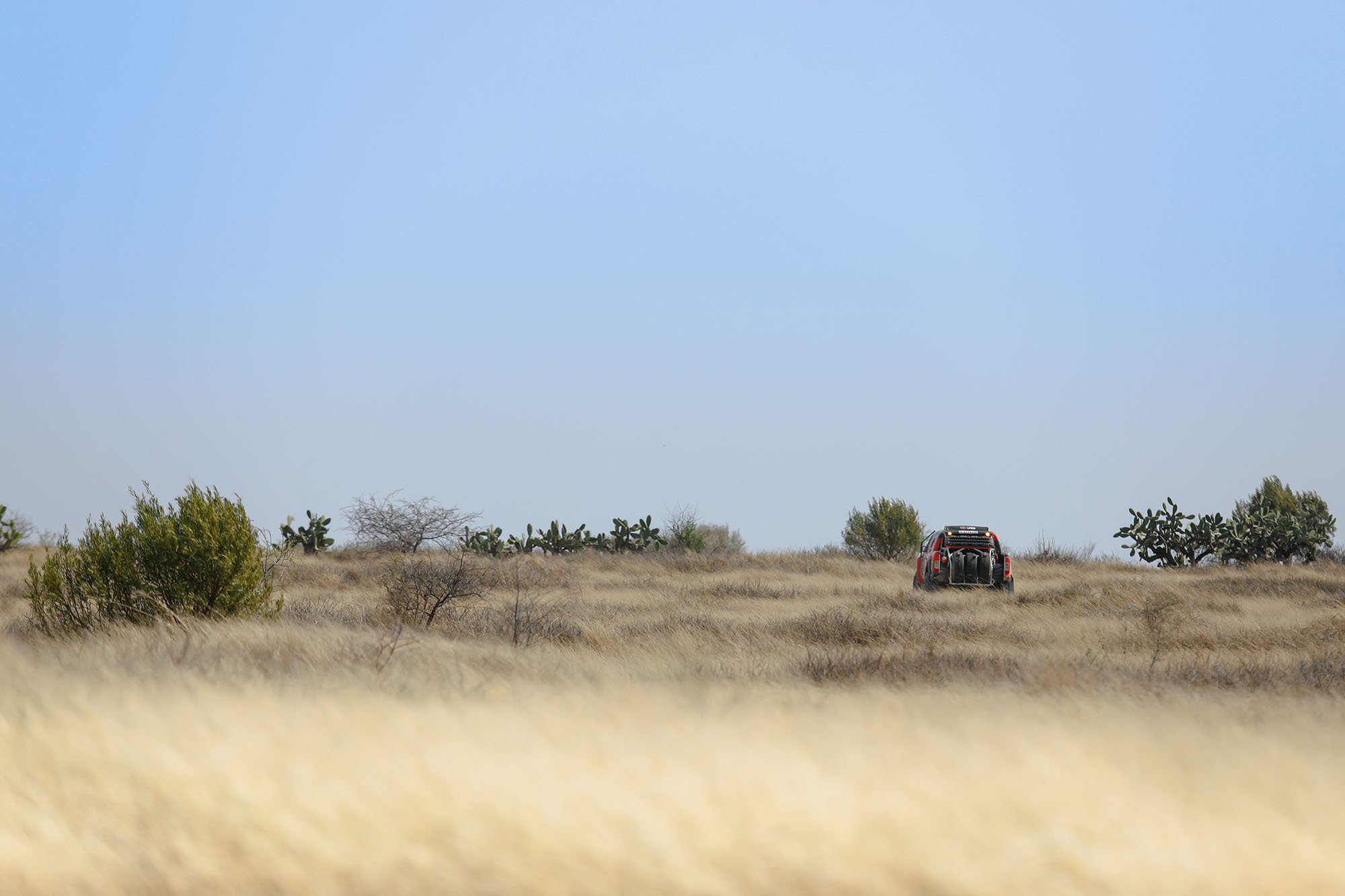 Who would have thought so many would fall so soon? But the list goes on. Complications prevented Team UTV, #203 manned by Dwayne Voogt and Mario du Plessis, from starting altogether. And some might say this was a better outcome than some of the poor fellas on two-wheels whose rally dreams were dashed by mechanical (or mental) issues one after the other. Smearing the scores with a whopping eight disqualifications in the Moto class. At least most were non-violent, albeit still significant, incidents. One poor fellas number was up, and #88 took a hard spill in the second section. To his misfortune, Jode Mostert of Penta Motor Group was the only one who endured a crash, which isn’t unusual at the least. However, a possible broken femur sealed his fate. There’s so much more to success – even as little as finishing each special unscathed – than purely physicality, mental strength, endurance, and don’t forget destiny. She’s a cruel and fickle mistress, Lady Luck, and if an athlete isn’t prepared to take her punches, to put up with her mental abuse, to stay focused during her longest rants or be willing to accept that after all that, she’s going to break up with you anyway. If a pilot can’t imagine surviving that, then they were never going to reach an awards ceremony to begin with.

Ø The first half of the course offers tight, windy narrow tracks in the bush opening to long fast sections, thick sand and overgrown paths. Tracks are very clear and defined but the navigation is tricky, considered Medium in difficulty. The second section is completely new to the event presenting riders with a fast, flowy course, a bit of riverbed and intermittent bush and brush.

Ø Often referred to as “South Africa’s Texas”, Vryburg is responsible for the largest beef production in the country. Vryburg is the perfect holiday stopover when road tripping along the N14 or travelling on the railway line that runs from Cape Town to Botswana.