As the Kalahari Rally Travels to Its Edge, Racers Must Choose to Leap… or Back Off

An ominous blood red sun had set the stage for another difficult day. The route was rumored to be even trickier to navigate than the former… (Something to look forward to?) Better yet, a four-plus-hour liaison awaited everyone from the numbered vehicles to the support caravans with two draining options for passage for the latter group: one which is over paved, established roads, but requires almost nine hours of travel, after completing. The alternative – and the only choice for contenders – was less than half the driving time but was pockmarked like an oily teen who liked to pick when they’re nervous. To say the journey was jarring would be an understatement. Miss a turn and end up in Botswana before noticing the little arrow had veered off the blue guideline. There are some positives to commencing a rally at a punishing degree. If nothing else, the more difficult an experience is, all others thereafter can feel relatively less taxing. In some cases, this evokes a feeling of empowerment, so that the racers can navigate their way through any shitstorm unbothered. And it’s possible the slimmer lineup might help relieve some of the head-to-head challenges so athletes can focus more on their roadbooks than their rivals.

From a bird’s eye view, Special Stage Two is a distinct loop, the DSS and ASS only miles apart. But this was actually the final point to point until Stage Five, where the event will endure a lengthy voyage back towards the final bivouac, again in Mafikeng. As far away as the fifth special, or Mafikeng, might seem, for the competitors who were forced to channel patience at the start of the special – when complications delayed the launch – the day felt like a millennia, dragging on for hours. It’s still too soon to say, but perhaps a pattern is emerging. And on one of the lengthier hauls this week, it guaranteed no less than 12 hours on the road for most participants. News which was expectedly hard to digest. But again, as is rally. When thumbs were (finally) set to upright position, race vessels cued in reversed class order: Cars then SXS then Motos. Terence Marsh #308 kicked down the “gate,” smashing the gas pedal of his tricked-out Nissan to wring out as much horsepower as possible in an attempt to stay ahead of the group. A feat which he and co-driver Riaan Greyling managed until the fuel stop. Alas, their reign did not last long, possibly a result of whatever stole their missing front corner panel and headlight. Their colleagues in #304 took the lead and held it for the remaining kilometers, but not without an epic battle for the Winner’s Circle. The two cars never let up, attacking each other like two angry bees simultaneously throwing themselves at one another midair trying to rob the other of their sweet, sweet honey. It was a brutal sight. Carbon fiber and fiberglass skins swayed and bowed on their chassis as they chased each other in and out of the Umbrella Trees tossing up powdery red fluff at every apex. And it was everything you’d hope to see out on the racecourse. 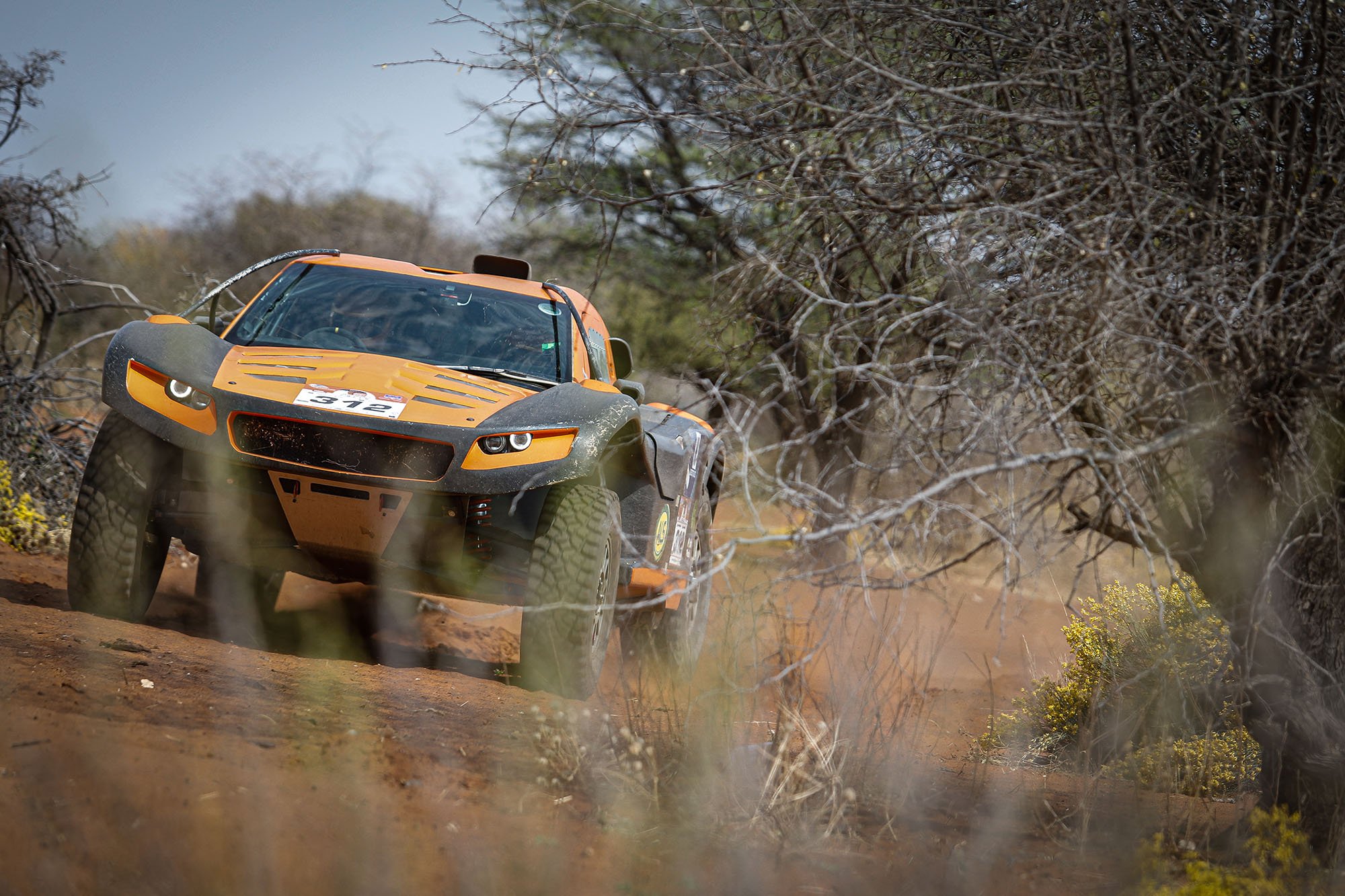 Philip Botha and Roelof Janse Van Vuren in #305 and the Century buggy [#312] were having their own tango for position not far enough away from the head of the pack for Red-Lined Motorsports’ frontrunners to feel at ease. In the Side-by-side category, the #202 Mariendal Racing team was eating up the soft patches of sand, climbing to the top of the overall standings with a steady eye on the finish. Driving on their own for most of the Stage, no other car nor UTV was close enough to be in Theo Erasmus’ dust. Not to take all the credit, his navigator Johann Bekker was extra sharp today, helping to put a mean gap between them and any adversaries in their class. A flow of 450s and Rally Reps funneled through the bush before the telltale whine and whistle of Can-Am side-by-sides drifted into earshot. One after the other, UTV’s #204, #205, #201 emerged from behind a layered horizon mixed into the line of motos. And the scoreboard reflected this pecking order in the results, the first of them – Geoff Minnitt and Siegfried Rousseau placing 2nd and Angola Rally Team piloted by Joao Lota and Nuno Santos closing off the third step in the podium. 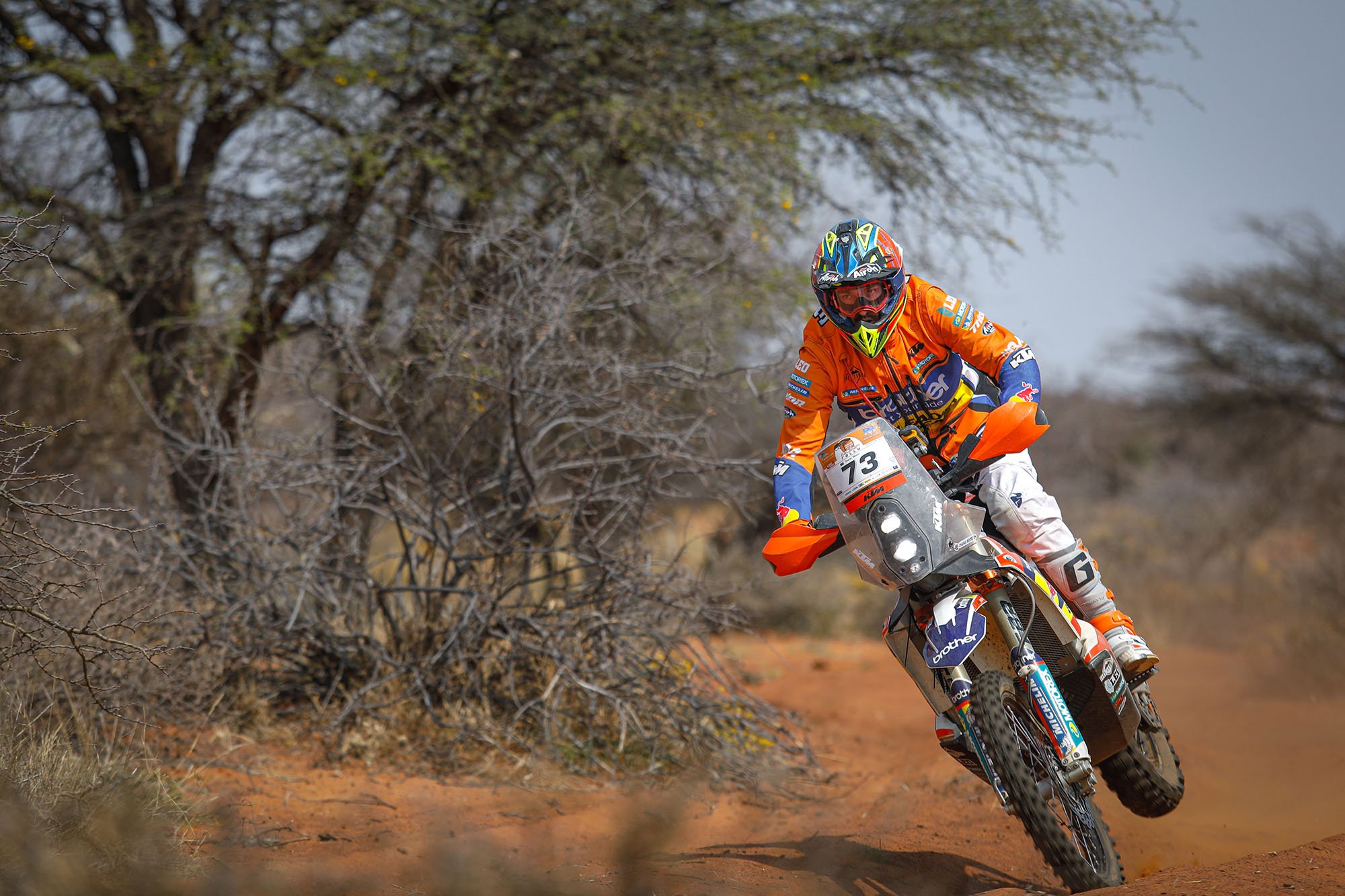 With a larger roster, and a surprising rate of DNFs yesterday, the Bikes were one to watch. Initially, #874 Gert Van Den Berg kept his pace ahead of the pack for a bit after petrol, until John Kelly [#2] overtook him nearing the Heuningvlei pan. No doubt he planned to maintain that grip on Number One in the general standings and in doing so, set the bar for greatness to the world class level. If competition breeds excellence, then the performances today brought out the best in people. And there seems to have been a shift in prowess and attitude. Because barely any time passed before (875) caught back up to (John), who seemed to have suffered a few setbacks (and this continued to the finish) as #16, Hentie Hannekom, and #73, Charan Moore, likewise surpassed him in the straight preceding the dry lakebed. In fact, Moore outshined them all, even the trailing UTV, manned by Hamish Horrel and Carl Oosthuizen [#201], taking the Stage win while Hannekom warmed the next seat. An issue with the tracker meant Gary Pretorius swept through the course invisible to the digital world. So there was a bit of surprise when apparated on the board as the third seed like a ghost from beyond. 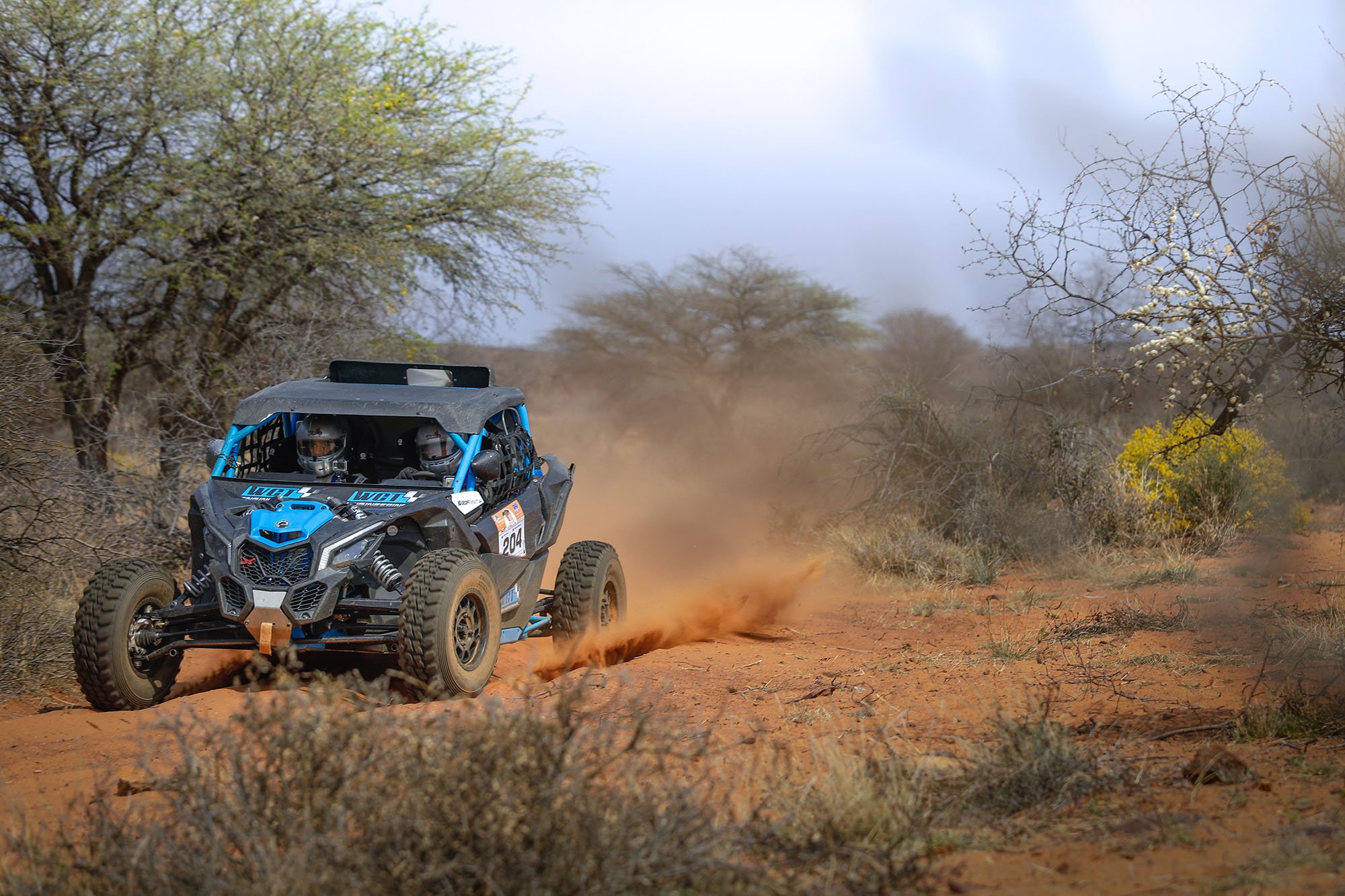 The isolation as you travel deeper into the Kalahari Desert doesn’t seem to last long, but the moments alone make an impact. Even at its most isolated areas, you’ll find a friendly, if not intensely curious, face waiting to ask you, “So, are you lost?” Truly, one wrong turn takes you deep into nothingness, the desolate grasslands once home to sprawling ranches in a booming era of industry – when cattle thrived in this region as the prominent throttle for the South African economy. But once this cash cow [insert groan] fell from grace, the land became a graveyard for steel pens, feeding troughs and decaying homesteads, beautifully frozen in time among the wild which tried to envelop them. The Savannah is a special place. A world of its own known best by the inhabitants who date back generations if not species. They speak to this land, and it speaks to them. Even in the quietest reaches of the region, word travels fast. And the news on the message board this week was that glory is ripe for the picking.

Ø Today really tested the drivers and navigators alike. The long distances and deep sand put a toll on the pilots while their partners had to be on-point for every twist and turn. Motos carried the heaviest burden of course as they were responsible for both the technicalities of the terrain and the complexity of the roadbooks.

Ø Heuningvlei is a village in Joe Morolong Local Municipality in the Northern Cape province of South Africa. The name means “the hollow of the bees where water gathers.” Heuningvlei was formerly owned by Turner & Newall. Blue asbestos was mined at Heuningvlei until 1979. The Northern Cape (Afrikaans: Noord-Kaap; Xhosa: eMntla-Koloni; Tswana: Kapa Bokone) is the largest and most sparsely populated province of South Africa. It was created in 1994 when the Cape Province was split up. Its capital is Kimberley. It includes the Kalahari Gemsbok National Park, part of the Kgalagadi Transfrontier Park and an international park shared with Botswana. It also includes the Augrabies Falls and the diamond mining regions in Kimberley and Alexander Bay. The provincial motto, Sa ǁa ǃaĩsi ‘uĩsi (“We go to a better life”), is in the Nǀu language of the Nǁnǂe (ǂKhomani) people. It was given in 1997 by one of the language’s last speakers, Ms. Elsie Vaalbooi of Rietfontein, who has since died. It was South Africa’s first officially registered motto in a Khoisan language. Subsequently, South Africa’s national motto, ǃKe e ǀxarra ǁke, was derived from the extinct Northern Cape ǀXam language. (https://en.wikipedia.org/wiki/Heuningvlei; https://en.wikipedia.org/wiki/Northern_Cape)